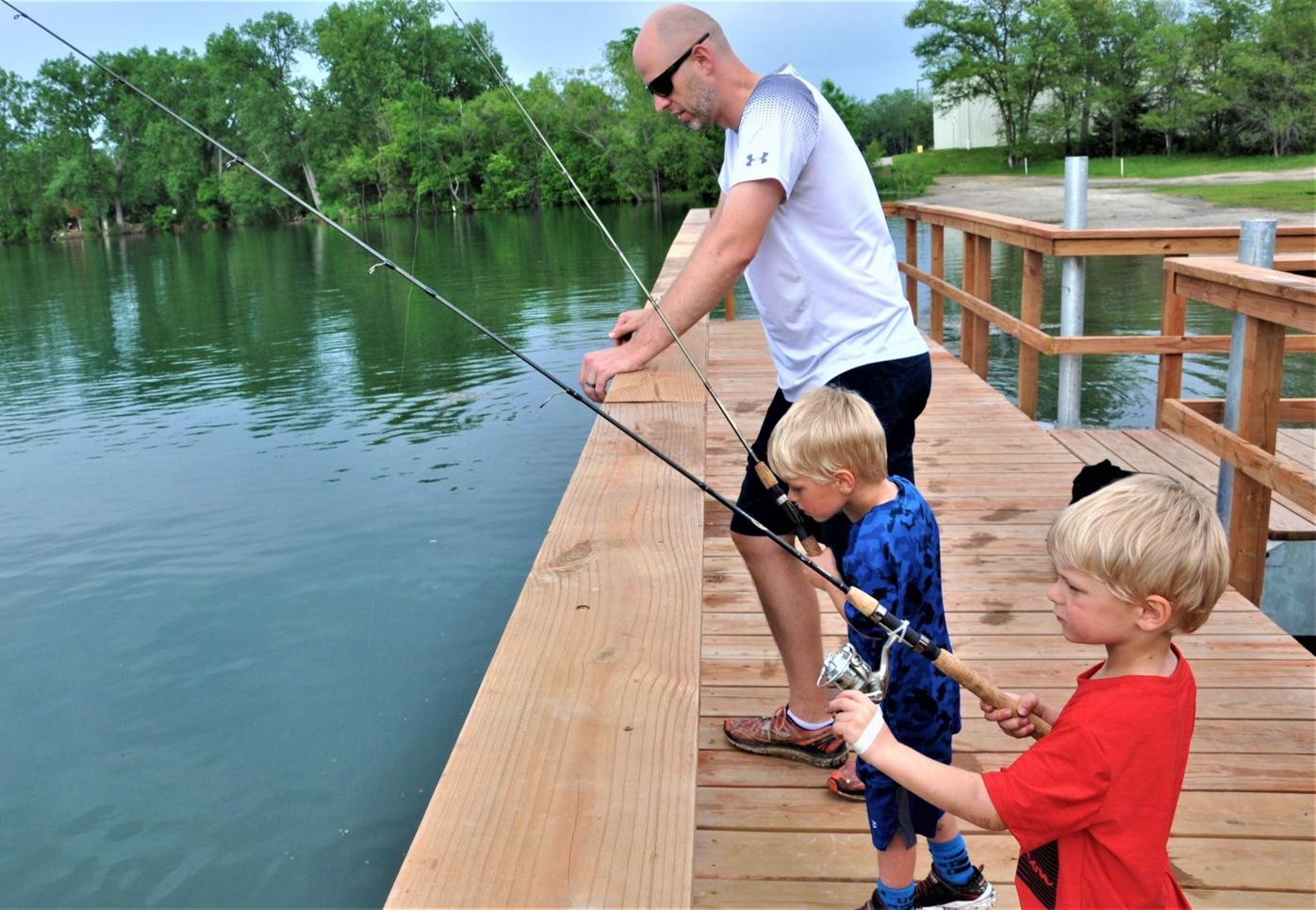 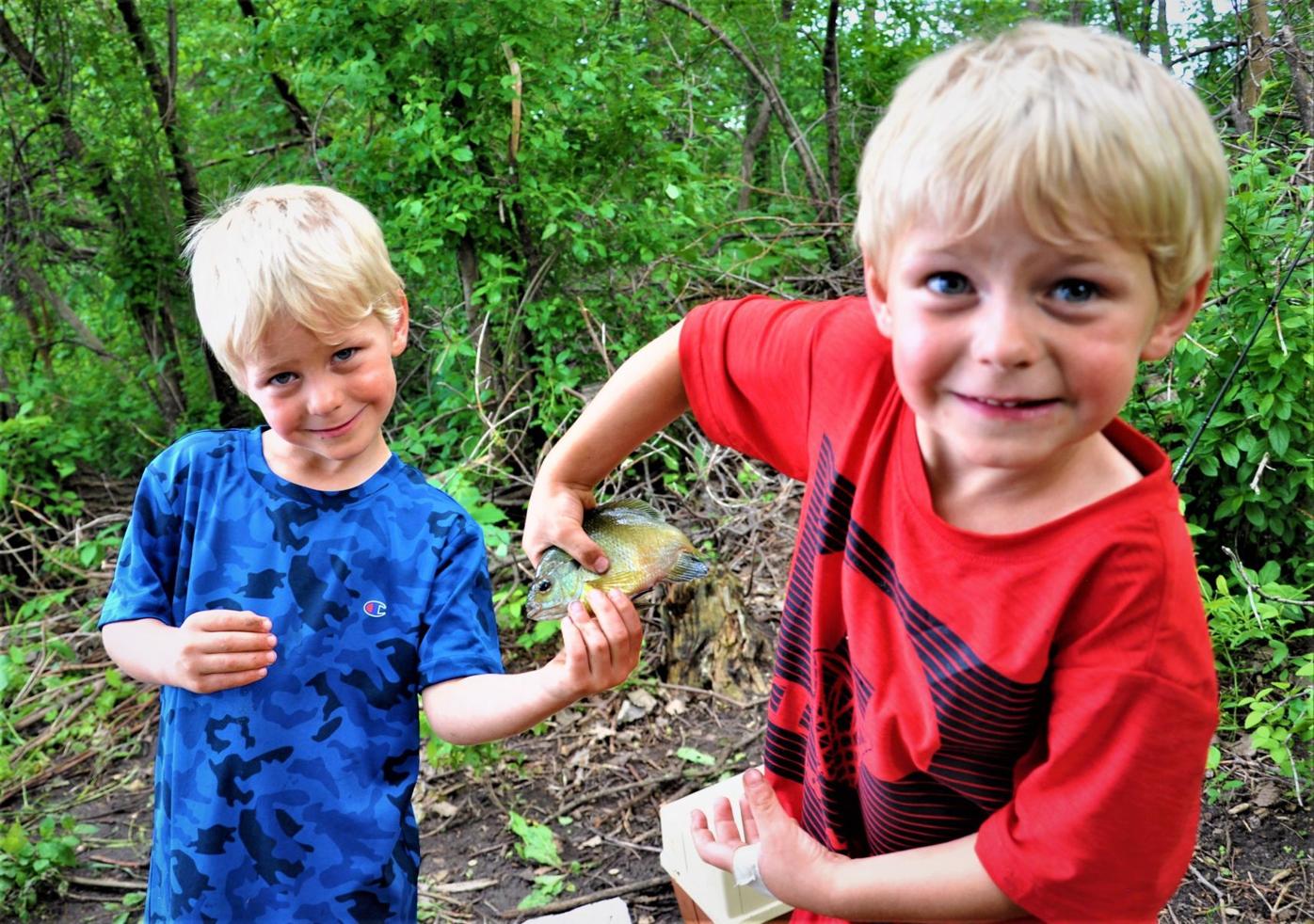 Twins Paxton (left) and Jaxon Keating shows a sunfish they caught with the help of their dad Sean Keating. (Pat Beck/St. Peter Herald) 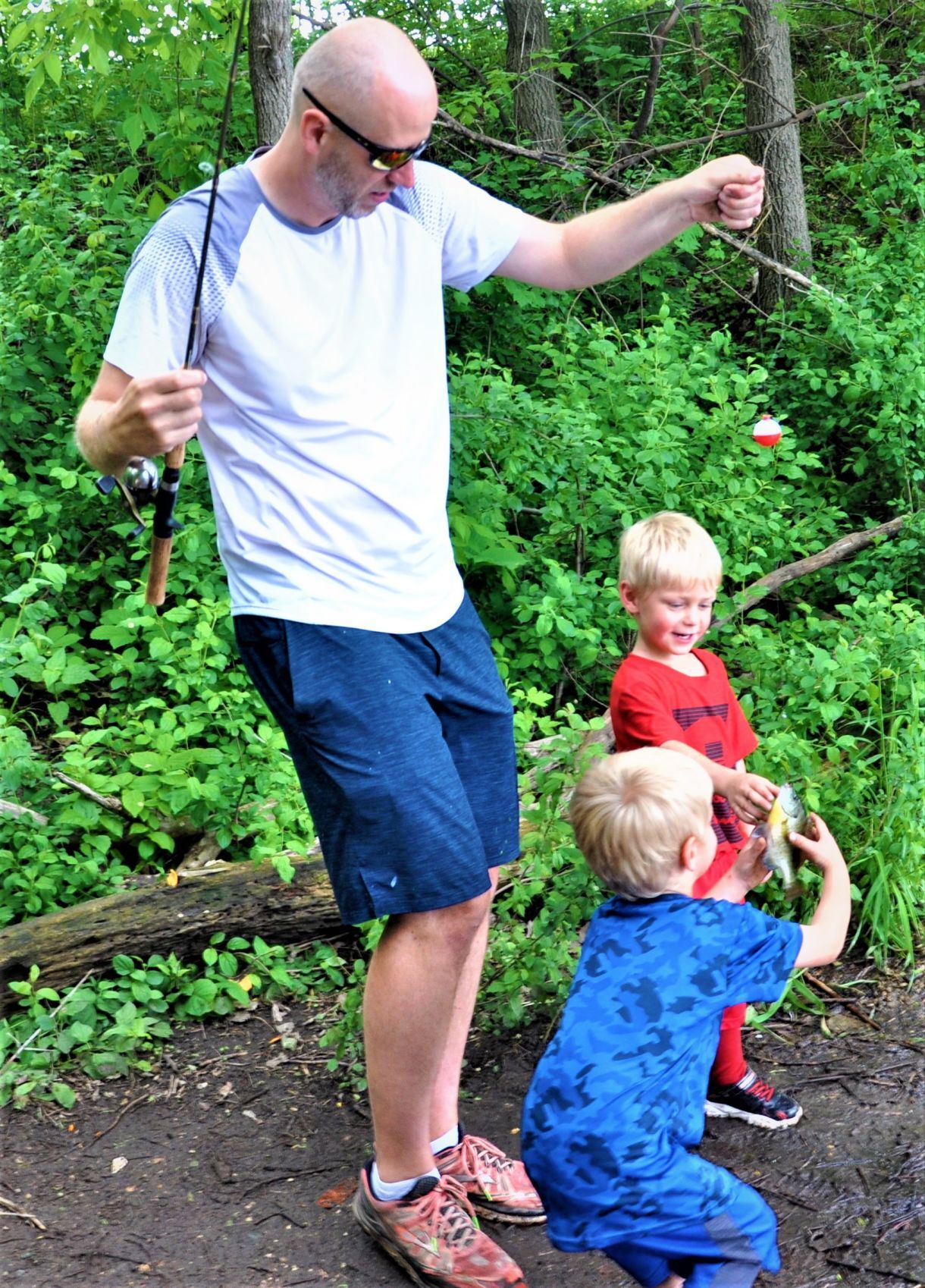 Sean Keating of St. Peter holds up a sunfish he caught with the help of his twin sons Paxton (front) and Jaxson at Lake Hallet.

Twins Paxton (left) and Jaxon Keating shows a sunfish they caught with the help of their dad Sean Keating. (Pat Beck/St. Peter Herald)

Sean Keating of St. Peter holds up a sunfish he caught with the help of his twin sons Paxton (front) and Jaxson at Lake Hallet.

A new fishing pier that has gone up on the south side of Lake Hallet in St. Peter will provide more fishing opportunities for all.

The pier, installed May 15 provides easier access to fishing and to deeper water than shorefishing. The 24-by-40 foot T-shaped handicapped accessible pier was installed by the city of St. Peter. The city purchased the $20,000 pier from Minnesota Boardwalks in Glencoe.

The pier may be extended about 8 feet longer into deeper water levels to provide more fishing access, St. Peter Public Works Director Pete Moulton said. Sometimes the area is flooded like it is now, and sometimes it is not flooded which reduces the depth.

Now it’s about 10 feet deep just off the front of the pier and a maximum of 25 feet deep in the 11-acre urban pond, formerly a gravel pit, located in back of Hy-Vee along Old Minnesota Avenue.

About half of the 8 feet wide and 1,700 feet long trail, which provides wheelchair access, has been converted from gravel to asphalt. Still to be completed is the southside of the trail which circles around the lake. The southside is a wetland that has flooded the trail.

The pier isn’t the only place to fish on the lake.

Sean Keating and his 4-year-old twin sons Paxton and Jaxson have been shorefishing at Lake Hallet for the last month or so, catching sunfish with angle worms as bait.

“We pick them up from day care and come down here for an hour or on a Sunday for an hour,” Keating said as his sons took turns catching fish. “It keeps them entertained. It’s close to home, which is nice.”

They used wax worms until switching to angle worms about a week ago. “They seem to work better,” Keating said.

The city officially opened the pier to the public June 1. The opening was delayed because of Gov. Walz’s rules to limit access to new construction until it is sanitized, Moulton said.

Moulton said he expects the pier will draw a lot of people. State guidelines allow a maximum of 10 people to gather together at social distancing of 6 feet apart which would limit the number on the pier.

In addition to fishing on Lake Hallet, the Keatings also caught sunfish in the adjacent holding pond on the west side of the lake near the water treatment plant.

However their favorite spot is on the Northeast corner of the lake. On one Sunday outing, they caught about a dozen sunfish including five keepers in the 6-7 inch long range.

The city has trimmed back trees and brush along the shore to open up more areas to fishing.

Keating, a St. Peter science teacher and head boys basketball coach who runs summer camps, has had more free time to fish since school facilities have been closed. They remain closed at least until June 15, when the Minnesota State High School League Summer Coaching Waiver Period starts. The last day of school, which has been only on-line learning, was May 28.

This is the first spring the Keatings have fished at Lake Hallet. They fished the Mill Pond in St. Peter last year. Mill Pond also is stocked nearly every year since 2010 with black crappie and/or sunfish and occasionally catfish, although it has mostly small sunfish.

Keating had little experience fishing growing up, but he wants to give his children more opportunities to wet a line.

“My dad was a doctor and didn’t really have time to take me,” Keating said. “I always enjoyed it.”

“It’s better than being inside and watching TV,” Keating said in addition to getting out in nature and learning something new. “This is the most fishing I’ve done. It’s been fun.”

The boys are enthusiast about fishing.

They both showed their excitement in catching a 7-inch sunfish, which have been common. “It’s a big one,” they both excitedly said.

The DNR also stocks fish in many lakes including Lake Hallet. Records show that Lake Hallet was stocked in 2018 with 99 adult black crappie and 24 adult bluegill sunfish and in 268 adult sunfish in 2017. Residents also have stocked fish in the lake.

“Our office hasn’t stocked any fish this year, short of stream trout ahead of opener,” DNR Hutchinson Area Fisheries Supervisor Scott Mackenthun said. “Our kids pond stocking is infrequent, often as we have staff time available in the spring and easy access to panfish, and we loosely gauge priority based on kids ponds that we suspect may have winterkill. For Hallet and some of our deeper kids ponds, we expect them to carry fish over and for some natural reproduction to occur.”

“Our crew also spotted a flathead catfish while electrofishing but was not able to net it,” Mackenthuns said. “Anglers have reported northern pike and walleye as well. “It’s possible some fish are being illegally introduced; we recommend against the practice as introduced fish can bring disease and parasites or interfere with the existing fish community.”

“As for fishing prospects, there are good chances to catch bluegill and black crappie and there are some decent largemouth bass roaming around, enough fish to keep visitors interested. It’s nice to have a few local fishing options and Hallet joins the Mill Pond, Minnesota River and nearby 7 Mile Creek and Paul’s Creek (St. Peter Trout Ponds) as places to enjoy some fishing. It’s a great excuse to see a kid get on a bike and go fishing during the summer.

“Hallet Lake has been a grassroots, community-based resource as far back as I can look in my files, with interest by locals in water quality and fish and wildlife habitat. With public access secure, adding fish and checking in periodically was a logical next step. I’m pleased with the progress that the city, state (DNR), and locals have made in providing recreational opportunities here.

“The pier and city trail are nice touches to the resource. I’m happy to see it all come to fruition.”