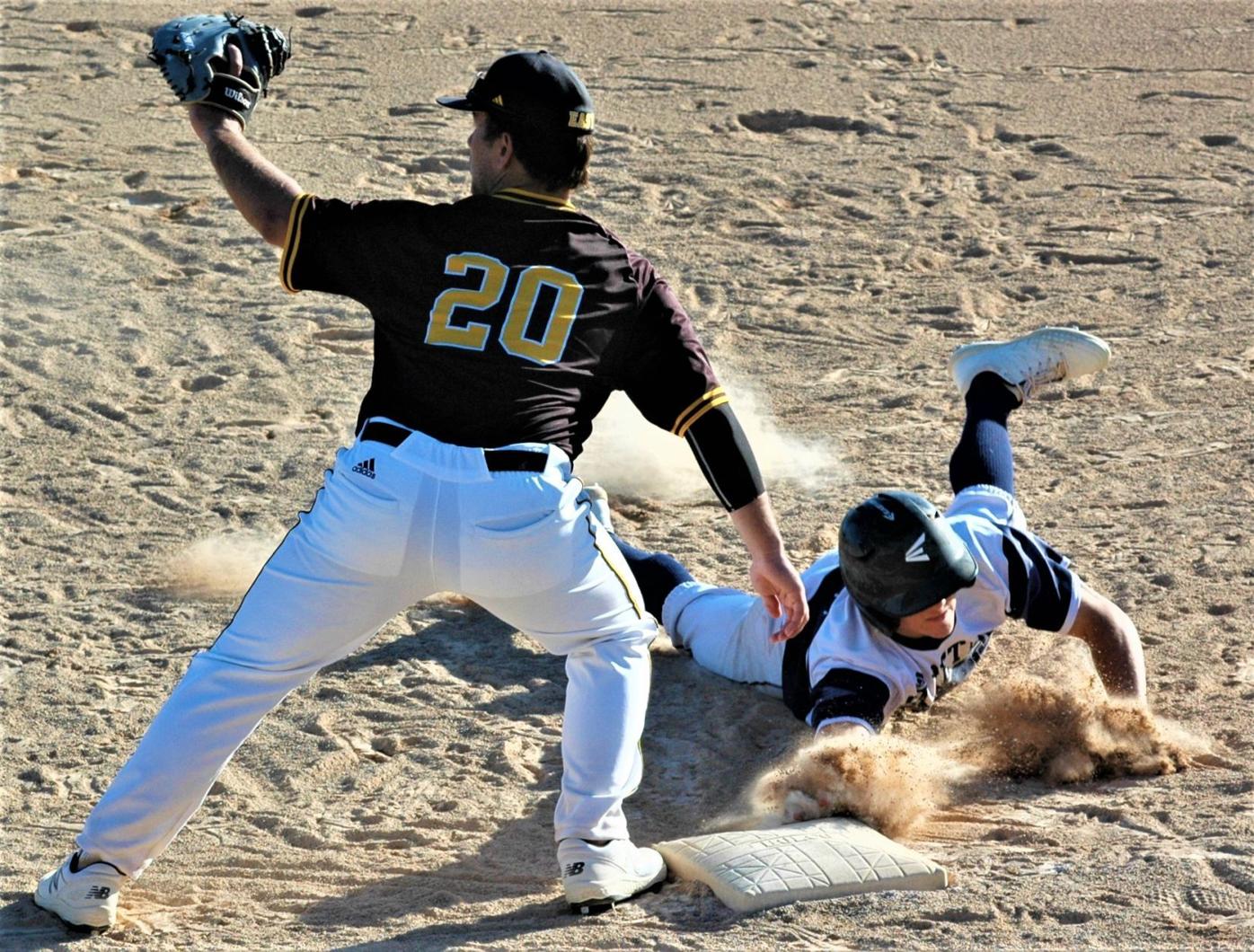 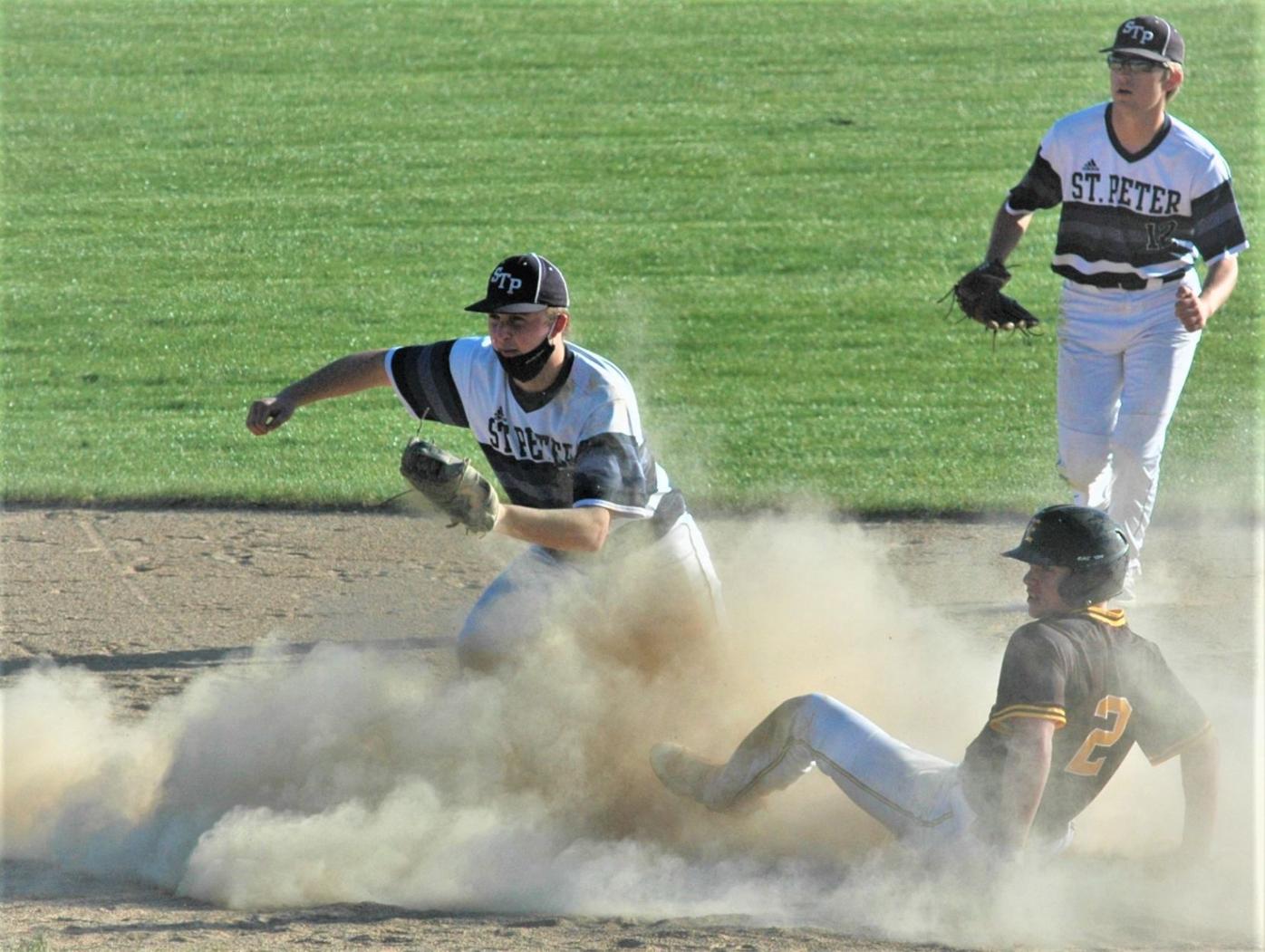 St. Peter shortstop Jake Rimstad holds up the ball after tagging out Mankato East runner Gus Gartzke attempting to go to second on a overthrow of first in the seventh inning. Centerfielder Ashton Volk backs up the play and does a fist pump. (Pat Beck/southernminn.com) 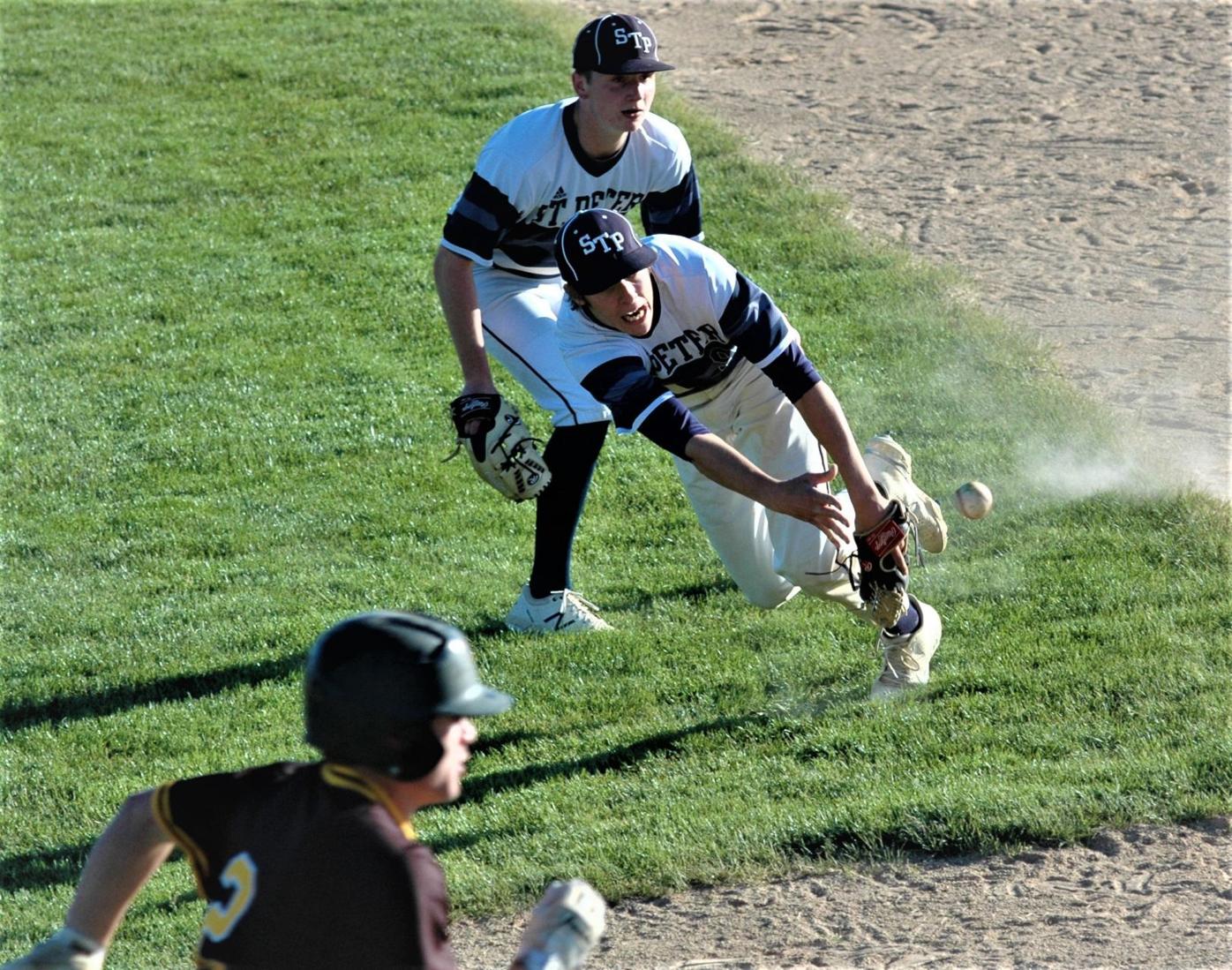 St. Peter second baseman Josh Robb picks up a grounder and under hands it to first for an error that allowed Mankato East’s Gus Gartzke to reach and allow the game-winning run to score in the seventh inning. Pitcher Theo Giedd backs up the play. (Pat Beck/southernminn.com)

In a game with as many walks and hit by pitches as hits, Mankato East scored an unearned run in the top of the seventh inning to edge St. Peter 7-6 in non-conference baseball Tuesday at Veterans Field.

The game featured 14 hits (nine by East and five by St. Peter) and nine walks and five hit batters.

After getting out of a bases-loaded-and-no-out jam in the top of the first inning on a double play, the Saints took a 3-0 lead in the bottom of the inning.

The Cougars loaded the bases with two walks and a hit by pitch off St. Peter starting pitcher Jorgen Jeremiason, but reliever Ashton Volk shut the door with a strikeout and double play from catcher Jake Moelter, who stepped on home plate and threw to first baseman Bennett Olson to end the inning.

The Saints scored three runs on two hits, three walks and one hit by pitch in batting around the order in the bottom of the first. Theo Giedd led off with a single, Brogan Hanson doubled, Josh Robb walked, and Jake Rimstad was hit by a pitch to drive in Giedd. Jeremiason walked to plate Hanson, and Olson walked to score Robb.

East erupted for five runs on six hits, a hit by pitch and an error to take a 5-3 lead in the third inning.

The Saints answered with two runs in the bottom of the third to tie the score 5-5. Volk led off with a walk. Moelter was hit by a pitch, Jeremiason walked, Volk scored on a wild pitch, and pinch runner Riley Throldahl scored on a ground out by Olson.

East regained the lead 6-5 with a run in the fourth on a hit by pitch, two errors and a sacrifice fly.

St. Peter tied it again 6-6 with a run in the bottom of the fourth. Hanson reached third on two errors, Robb walked, and Hanson scored when Volk grounded into a double play.

The Cougars scored the game-winning run in the top of the seventh with two outs on a double and a throwing error.

Hanson led the Saints in hitting, going 2-for-4 with a double and two runs scored.

Jeremiason started at pitcher for St. Peter and did not get an out in allowing two walks and a hit by pitch.

Robb pitched the fourth and fifth innings, giving up one run (unearned) on one hit, two walks and one hit by pitch.

Giedd finished up the last two innings on the mound for St. Peter with four strikeouts, no walks, one hit and one run (unearned) in picking up the loss.

The Saints continue their homestand 7:15 p.m. Thursday versus Holy Family Catholic, at 4:30 p.m.. Friday versus Hutchinson and 4:30 p.m. Monday versus Belle Plaine.