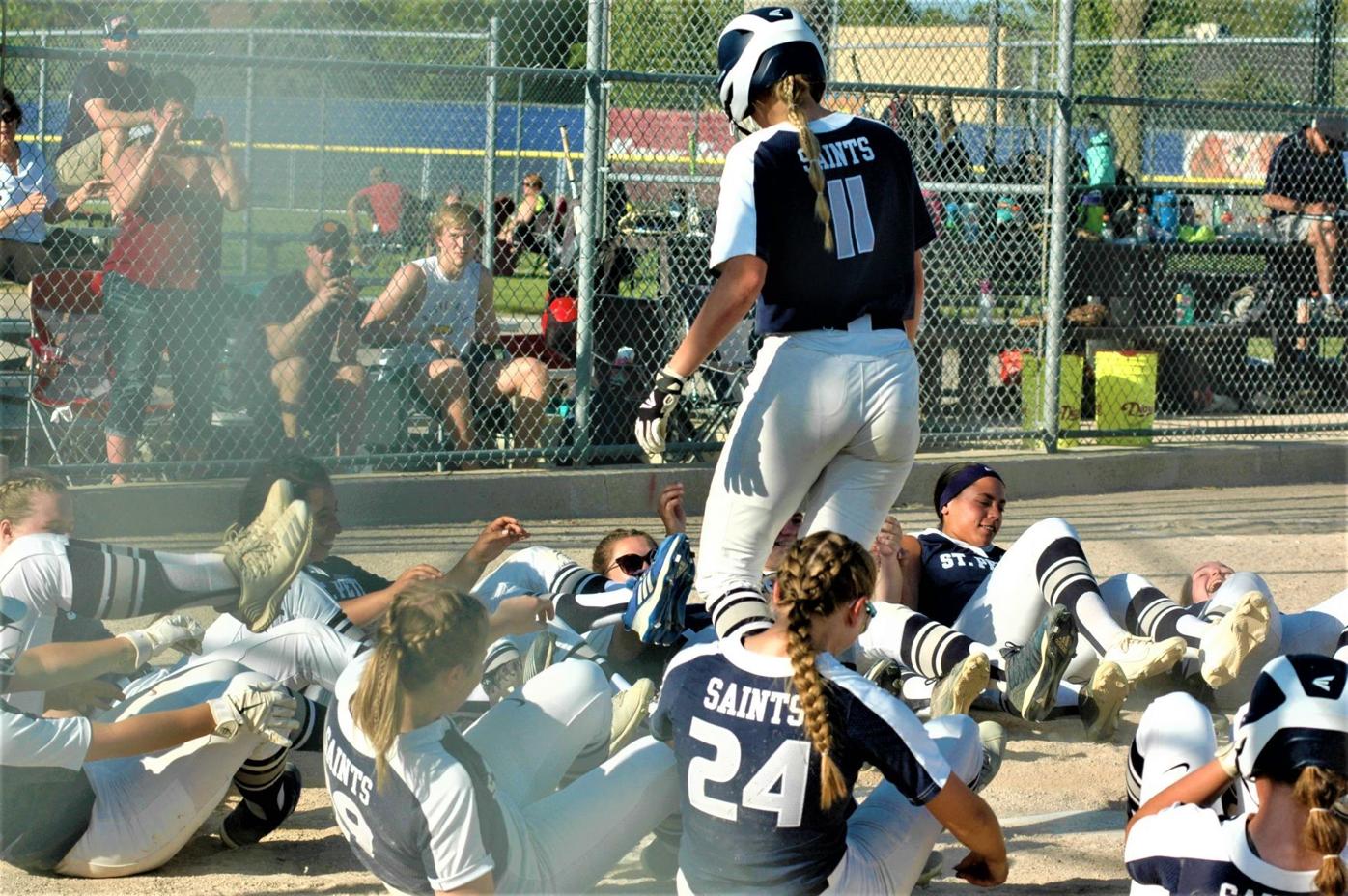 Junior Dani Johnson is the last player standing after she homered against Waconia. Instead of giving her a group hug, her teammates all fell down as she touched home plate. (Pat Beck photos/southernminn.com) 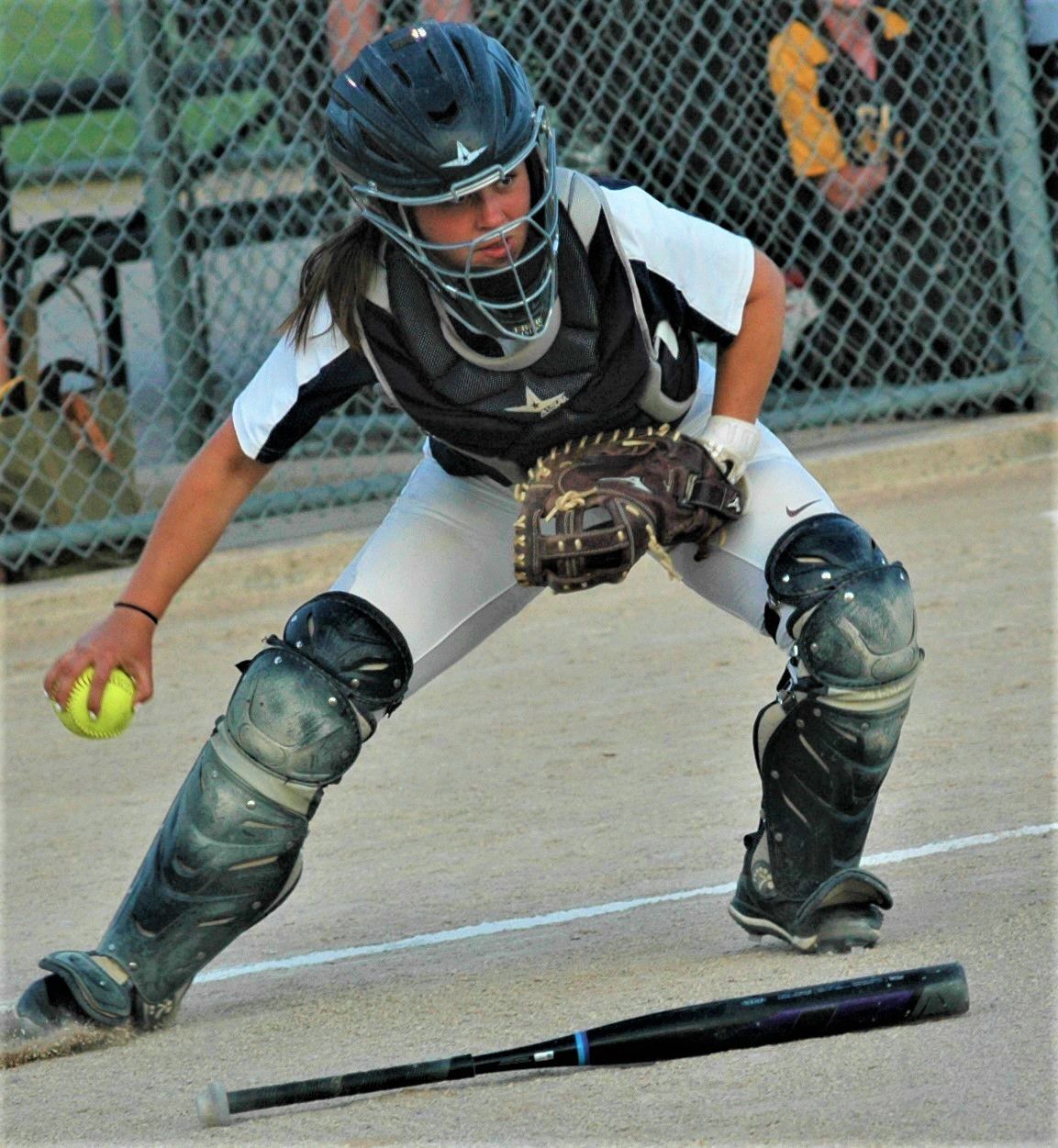 St. Peter senior catcher Alyssa Hrdlicka fields a bunt against Hutchinson and gets set to throw to first. 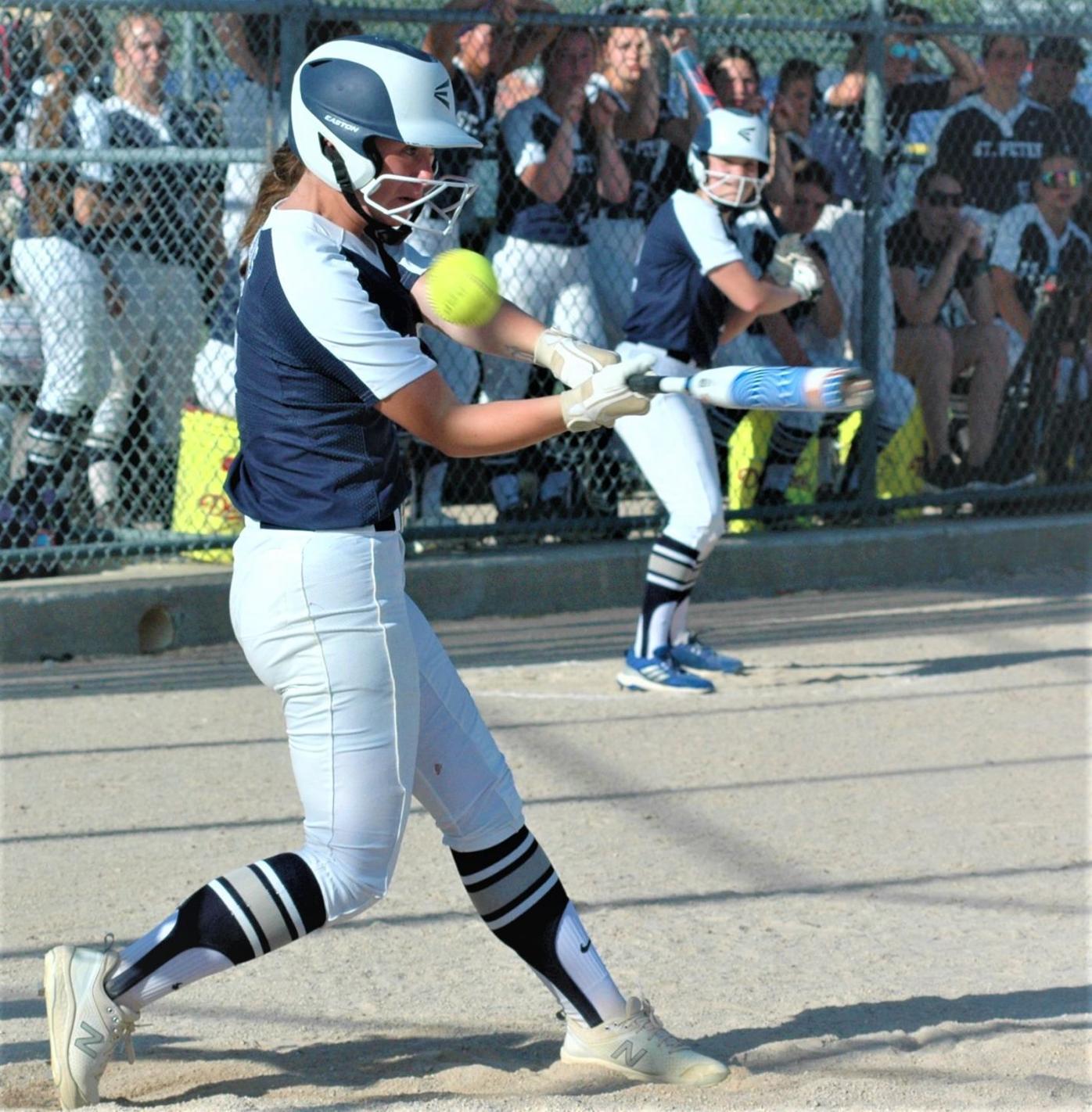 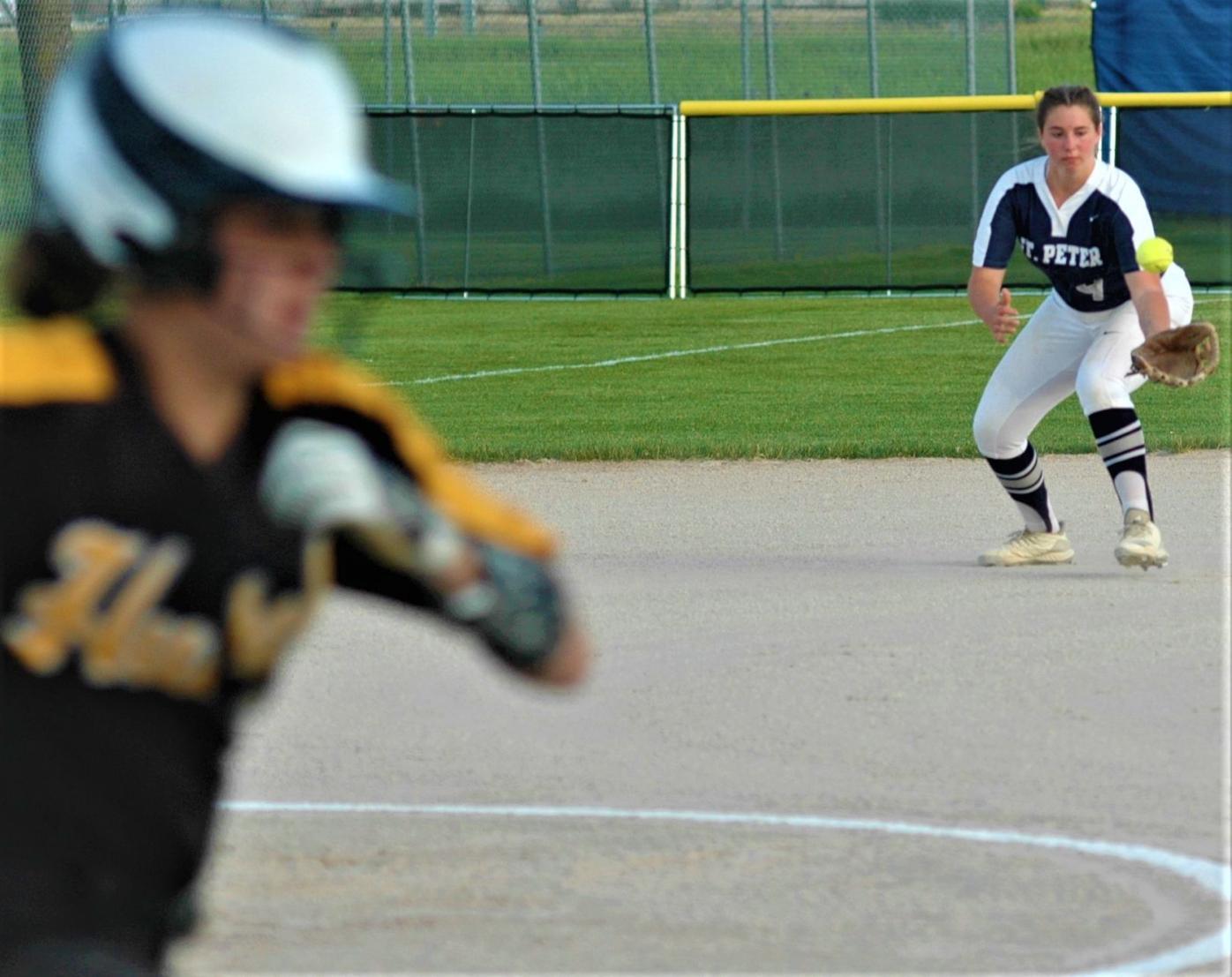 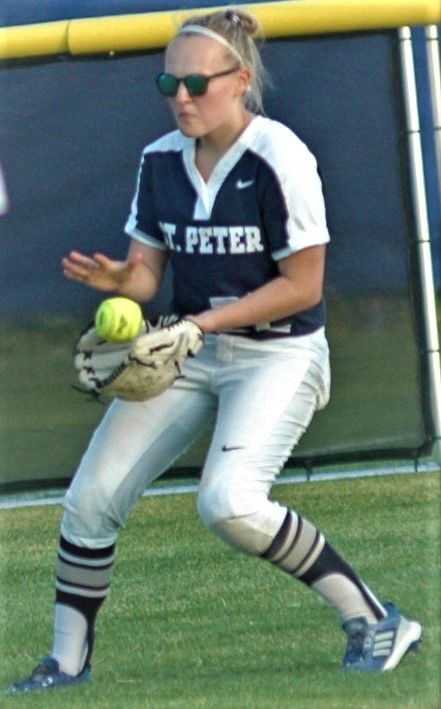 Junior Dani Johnson is the last player standing after she homered against Waconia. Instead of giving her a group hug, her teammates all fell down as she touched home plate. (Pat Beck photos/southernminn.com)

St. Peter senior catcher Alyssa Hrdlicka fields a bunt against Hutchinson and gets set to throw to first.

St. Peter bats went cold on a hot and steamy Thursday, and the Saints were eliminated in the Section 2AAA softball playoffs at Caswell Park in North Mankato.

Seeded No. 3, the Saints lost in the first round to No. 6 seeded Waconia 7-3 and in an elimination game to No. 7 seeded Hutchinson 6-0.

“Tonight was a tough one,” St. Peter coach Heidi Niemeyer said. “Waconia hit every gap possible. And we hit the ball right to them or struck out. We definitely did not play how we are capable. They hit a grand slam in the second inning, and I felt like I saw the wind get knocked out of our sails at that point. We kept our defense pretty clean the entire game but again Waconia just hit the ball well.

“During the game against Hutch we put the ball in play better than the first game but still came up short. They made a couple great catches on some well hit balls, too. Our infield struggled during game 2, committing four errors together. Tonight was just not our night.”

St. Peter has had great success over the years playing in Section 2AA, but the Saints moved up a class this season which has bigger schools and tougher competition.

St. Peter jumped to a 2-0 lead in the first inning, but the Wildcats took a 4-2 lead with a grand slam in the second inning and increased it to 6-2 in the sixth and 7-3 in the seventh.

The Saints opened up scoring in the first inning. Elle Davis walked, stole second and scored on a single by Grace Remmert. Sophia Doherty then doubled in Remmert.

Dani Johnson had the big blow for St. Peter with a solo home run in the seventh inning.

Kaylee Barrieau got the start for Waconia. The pitcher surrendered three runs on four hits over seven innings, striking out 11.

Maya Pettis toed the rubber for St. Peter. The hurler went four and a third innings, allowing six runs on nine hits, striking out two and walking one. Ryenne Pettis threw two and two-thirds innings in relief with one run on three hits, no walks and one strikeout.

Remmert led the Saints with two hits in three at bats, one RBI and one run. Doherty and Johnson both went 1-for-3 with one RBI.

Ryenne Pettis and Doherty with a double each managed one hit for St. Peter.

Maya Pettis was in the pitcher’s circle for St. Peter. She went six and two-thirds innings, allowing six runs on 11 hits, striking out seven and walking one.

“It is tough to end our great season playing the way we did, but this doesn’t take anything away from this team who played well in 2021, hitting the ball crazy well,” coach Niemeyer said.

“Our pitching staff too pitched great this season despite tonight’s outing. We definitely have nothing to hang our heads about. We will absolutely miss the leadership, positivity and fun that our 2021 seniors brought to our team and are excited for next year to watch the 2022 seniors get after it.

“As always I feel blessed to be able to coach for this softball program as the integrity and sportsmanship that abounds on our teams is second to none. I love all these girls and am so honored to have had the chance to be on the field with them this season.”