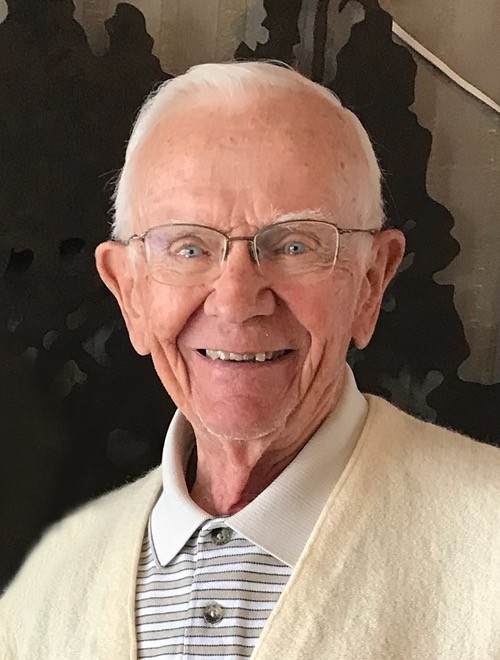 Robert "Bob" Swedberg 1927–2020 St. Peter, MN—Robert "Bob" Swedberg, age 92 of St. Peter, died Sunday, January 5, 2020 at the Benedictine Living Community in St. Peter. A memorial service will be held at 11 a.m. Thursday, January 9, 2020 at First Lutheran Church in St. Peter, with visitation beginning at 9:30am. Burial will be in Resurrection Cemetery in St. Peter. Condolences for the family can be left at www.saintperterfuneralhome.com Robert Perry was born June 3, 1927 in Wolf Point, Montana to Carl P. and Lillian E. (Anderson) Swedberg. He graduated from Wolf Point High in 1945 and enlisted in the US Navy, being discharged in 1946. He met Kathryn Wick in 1947 in their church choir and they were married on June 18, 1949 at Hope Lutheran Church in Minneapolis. Following Bob's graduation from the University Of MN College of Pharmacy in 1951, they moved to Mankato and started their family. In 1955, the family moved to St. Peter and founded Swedberg Drug, until retiring in 1987. During his years in St. Peter, Bob was very active in the community including: city council, church board, Nicollet County Bank board and Lions Club. Kathy and Bob enjoyed traveling together. They traveled to most of the United States, Canada, and other faraway places. He enjoyed photography, singing, playing golf, playing cards, and visiting around coffee with the guys. Bob is survived by: daughters, Kris (Ron) Vorwald, Karen (Randy) Michels; son, Gary (Colleen Flaherty) Swedberg; 12 grandchildren; and 10 great-grandchildren. He was preceded in death by his parents, sister Ruth Gilbert, and wife Kathy. The family extends a special thank you to the staff of Ecumen, Benedictine, and hospice for their extraordinary care of Bob over the years.

To plant a tree in memory of Robert Swedberg as a living tribute, please visit Tribute Store.
Load comments