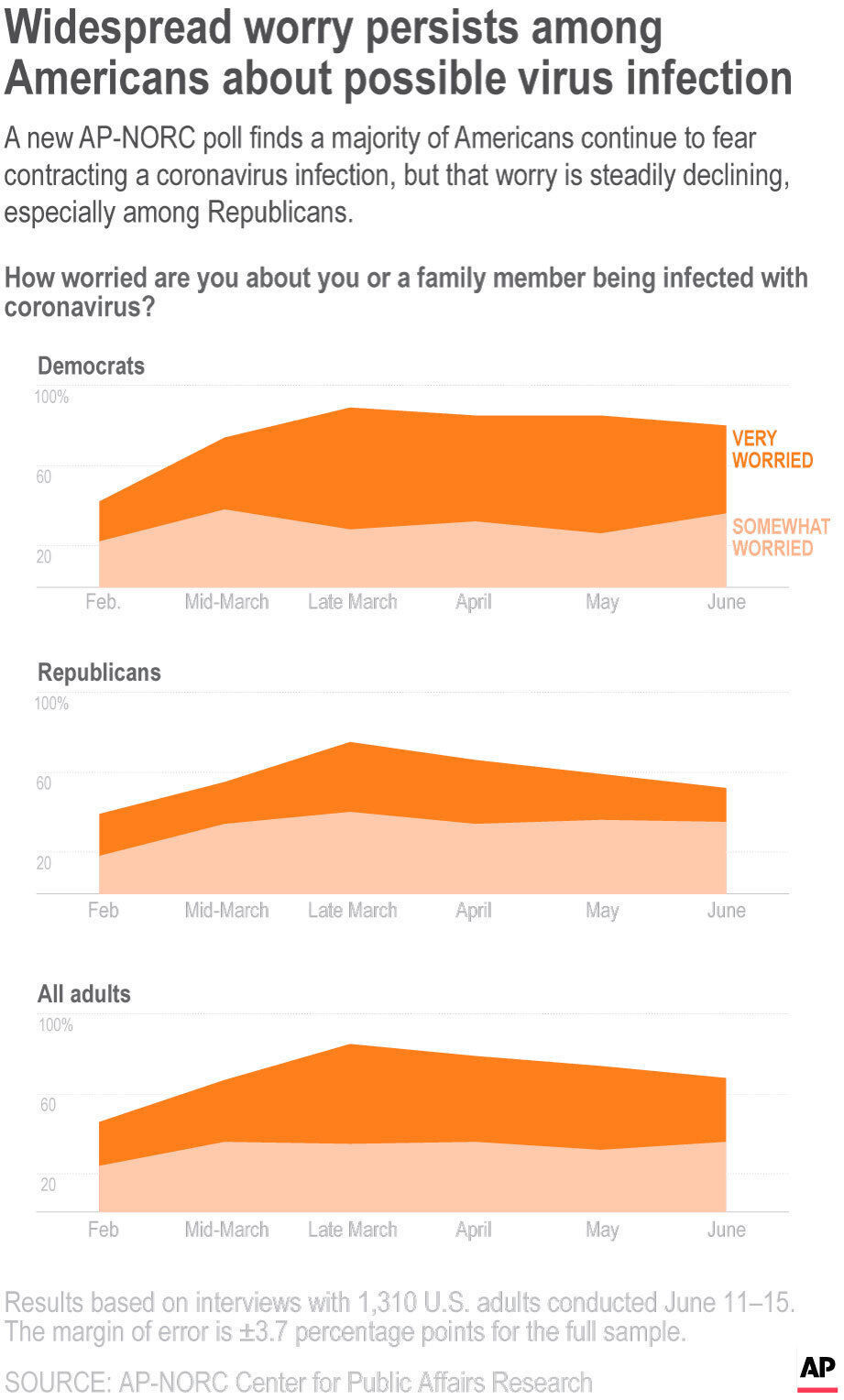 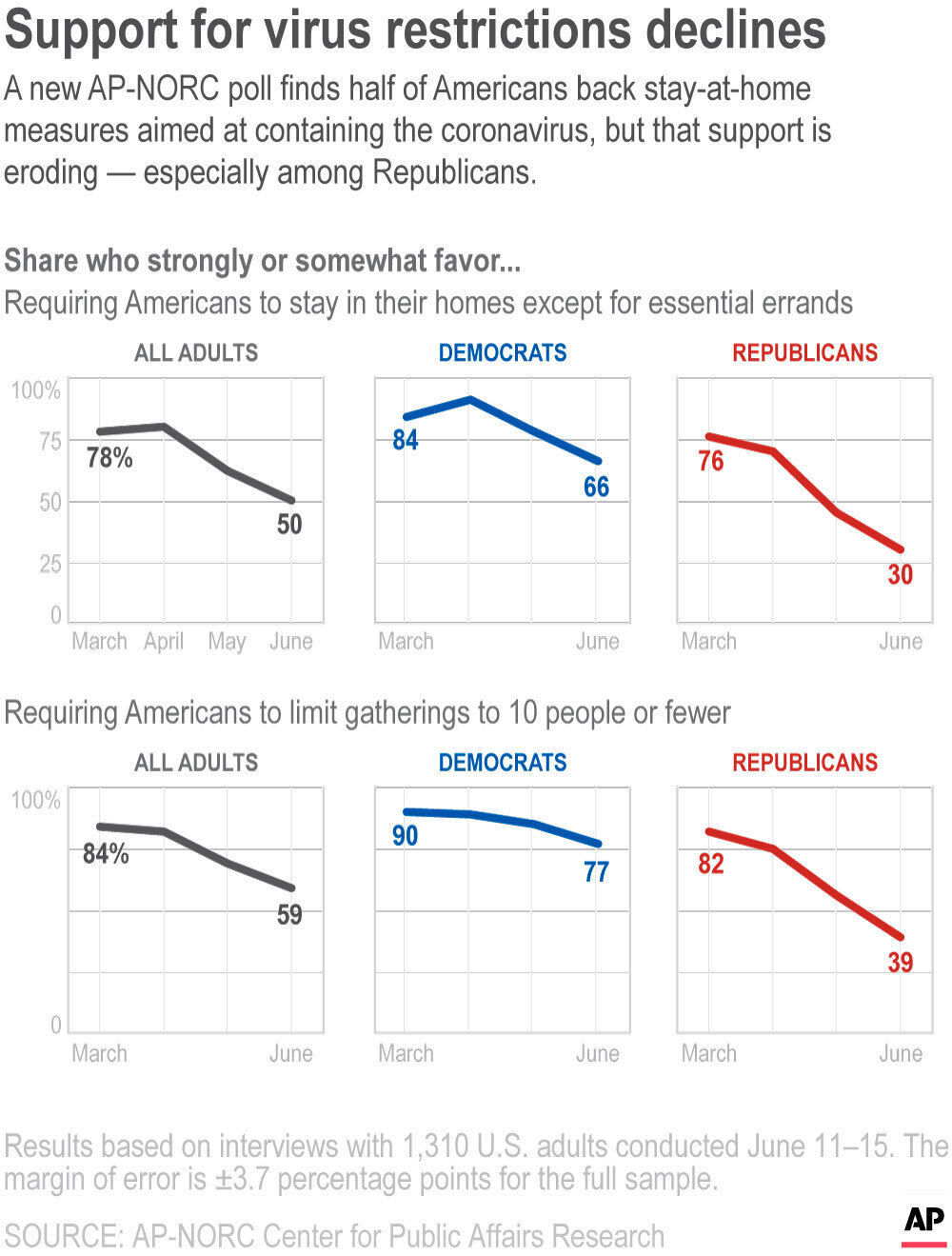 <&firstgraph>WASHINGTON (AP) <&firstgraph>— After months of steady progress, new confirmed cases of COVID-19 climbed to near record levels in the U.S. this week. Experts blame a nation that’s become complacent, and a new poll finds evidence to back them up: Support for measures to slow the virus’ spread has declined from the early days of the coronavirus pandemic.

<&firstgraph>To be sure, the June survey from The Associated Press-NORC Center for Public Affairs Research finds that many Americans never fully embraced the reopening effort now underway in many states. A majority of Americans still have concerns about contracting COVID-19, and significant shares still support the kinds of public health restrictions that states have rolled back.

<&firstgraph>“I believe that everything is being lifted a little bit too early,” said Tamela Andrews, 51, who recently moved to New Orleans. “There are certain people who are following the rules, trying to keep the virus down ... but there’s a lot of people that’s not.”

<&firstgraph>In April, 78% of Americans said they were at least moderately worried that they or a family member might be infected with the virus, but that figure declined to 68% in early June. Those saying they are very or extremely worried is also down, from 43% in April to 32% this month.

<&firstgraph>On June 24, the U.S. reported 34,300 new COVID-19 cases, near the high of 36,400 reached on a single day in April in a count kept by Johns Hopkins University. The country has suffered more than 120,000 deaths from COVID-19, more than any other nation, many of them among older Americans.

<&firstgraph>Troubling surges in confirmed cases have worsened this week in several states that set single-day records for new cases: Arizona, California, Mississippi, Nevada, Texas and Oklahoma. Some of those states also broke hospitalization records, as did North Carolina and South Carolina.

<&firstgraph>Caitlin Oppenheimer, who leads public health research at NORC at the University of Chicago, said the survey results show the country is definitely experiencing “quarantine fatigue.”

<&firstgraph>“No one wants to be hunkered down anymore,” she said, adding: “Given that the disease still exists and transmission still exists, it isn’t surprising that we have seen many communities with a spike in the numbers.”

<&firstgraph>The changes in opinion about the coronavirus are due in large part to a shift among Republicans, led by President Donald Trump, who opted to relaunch his reelection campaign last weekend with a large indoor rally in Tulsa, Oklahoma, despite requests from some health officials to delay. Most of those in attendance followed the lead of the president when he is out in public and did not wear a mask.

<&firstgraph>About 8 in 10 Democrats say they are worried they or a family member will be infected, compared with about half of Republicans. Three in 10 Republicans support stay-at-home orders, while roughly twice as many Democrats do. Roughly three-quarters of Democrats, but only about 4 in 10 Republicans, favor limiting the size of gatherings to 10 people or fewer.

<&firstgraph>“I feel like if we don’t (reopen), we could have a really big economic crisis,” said Kara Paine, a Republican from Lewiston, Maine. “As it stands, I think we’re going to have some pretty long-term, lasting effects from people being out of work for so long. Eviction processes were kind of put on hold, and I feel like once those start, I think we’re going to see how much damage has been done. We can’t keep shutdown forever in fear of a virus.”

<&firstgraph>Americans’ assessment of the economy improved in the June survey as states reopened, with Republicans largely responsible for the more positive thinking – 85% of Democrats say economic conditions in American are “poor,” while 65% of Republicans describe them as “good.”

<&firstgraph>Mark Simon, 53, of Maple Valley, Washington, said the economic impact of the virus is starting to outweigh whatever health concerns he may have once had. He recently got word he could be without a job soon as his employer, Boeing Co., makes cuts due to the pandemic’s impact on the aviation industry.

<&firstgraph>“If they don’t find placement for me in the next 60 days, I’m laid off,” Simon said.

<&firstgraph>The weight of the pandemic’s human toll, however, may swing elected officials — including Republicans — back toward where many Americans still stand on public health measures.

<&firstgraph>New York, New Jersey and Connecticut announced this week that travelers from states with high infection rates must quarantine for 14 days upon arrival. About half of Americans overall favor restricting travel within the U.S., although there is a partisan split on this issue, too, with roughly two-thirds of Democrats in favor compared with about 4 in 10 Republicans.

<&firstgraph>On Thursday, Texas’ Republican governor, Greg Abbott, said the state would pause a reopening plan that made the state one of the first to lift lockdown orders. Texas has reported more than 11,000 new cases in the previous two days and the number of COVID-19 patients has more than doubled in the past two weeks.

<&firstgraph>“Now that economically it’s really important to try and get this country moving along ... I think it does introduce confusion,” Oppenheimer said. “Messages around health and risk and trade-offs are never easily conveyed in soundbite, and we are experiencing that here.”