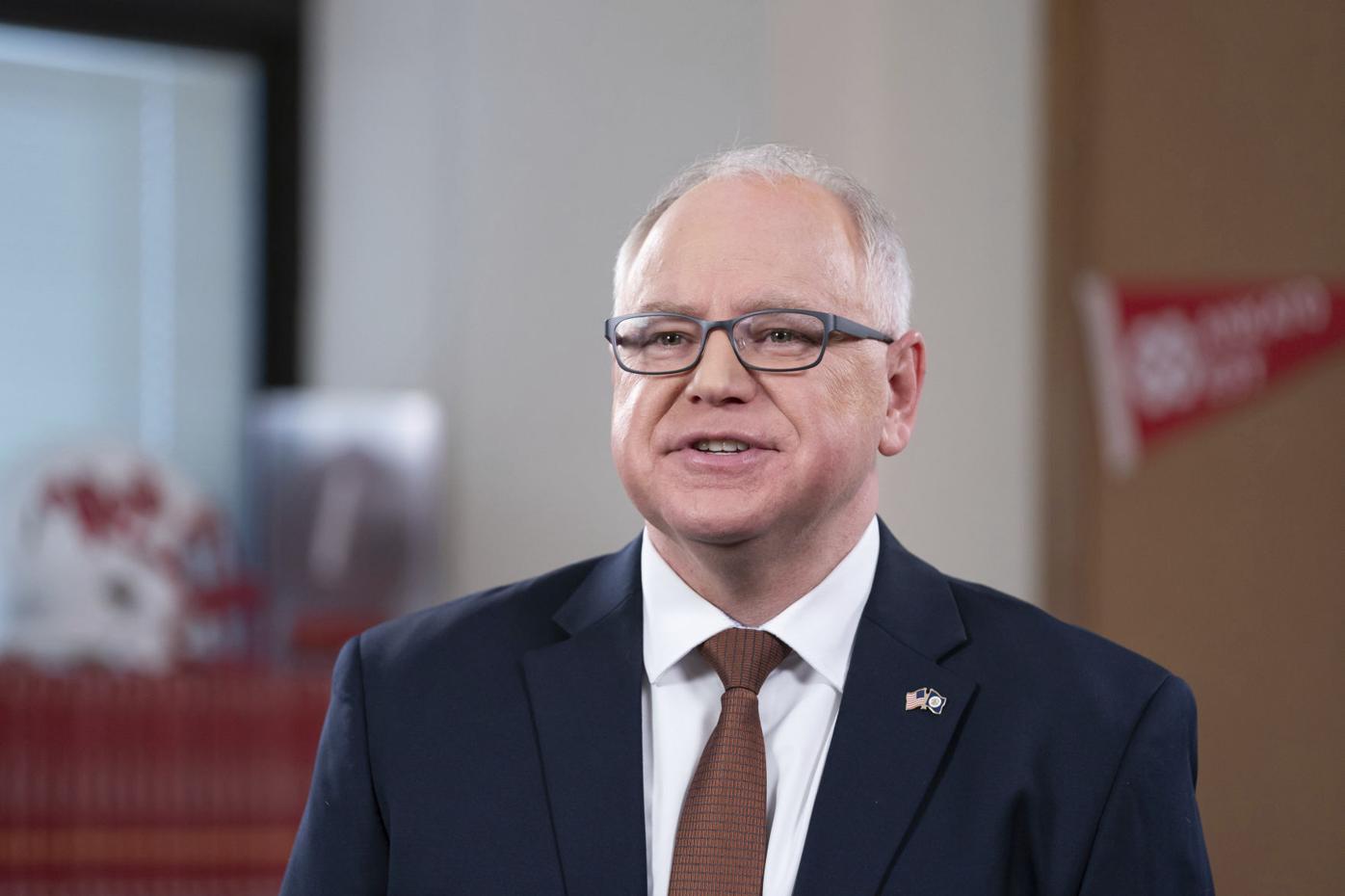 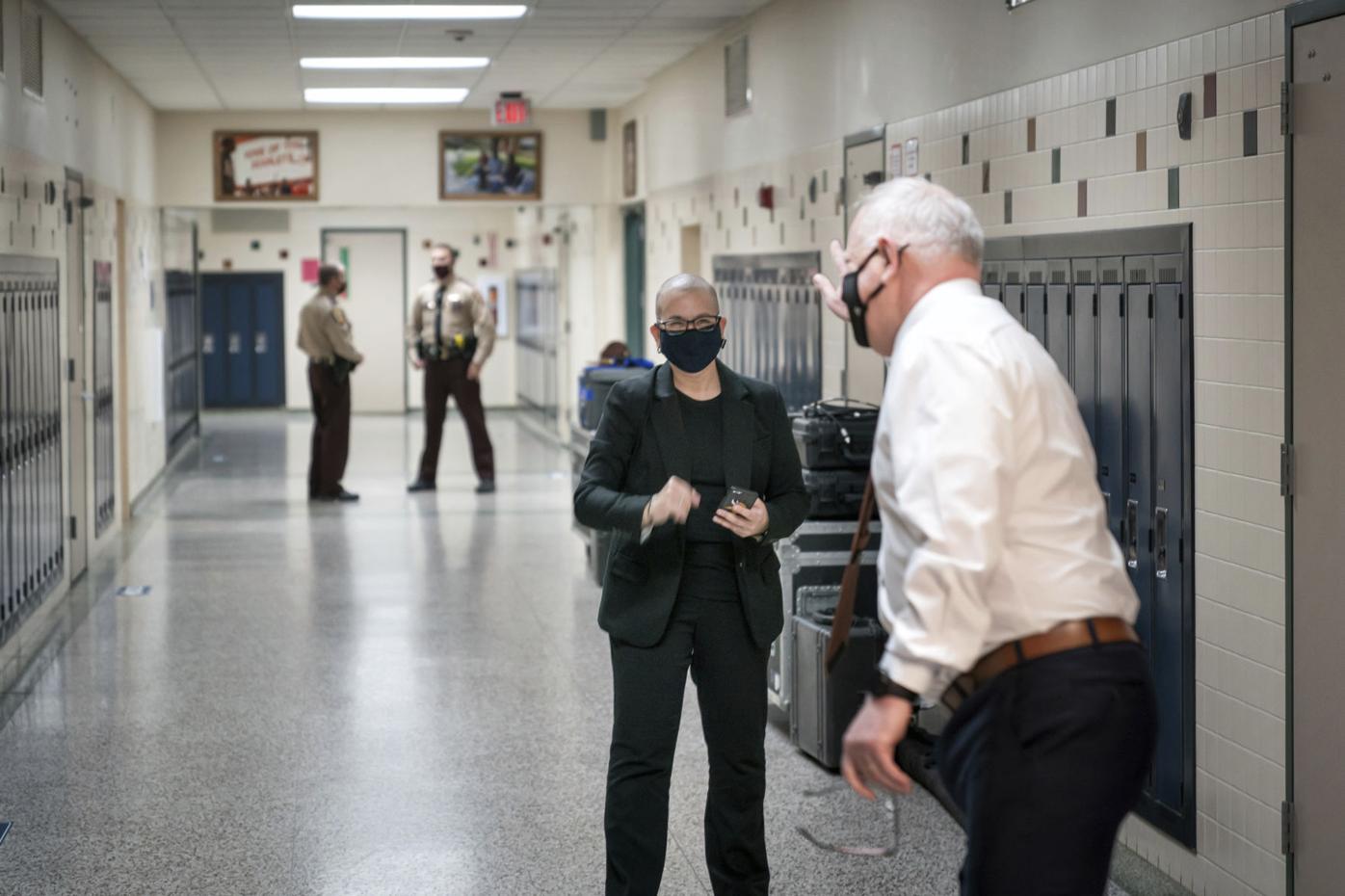 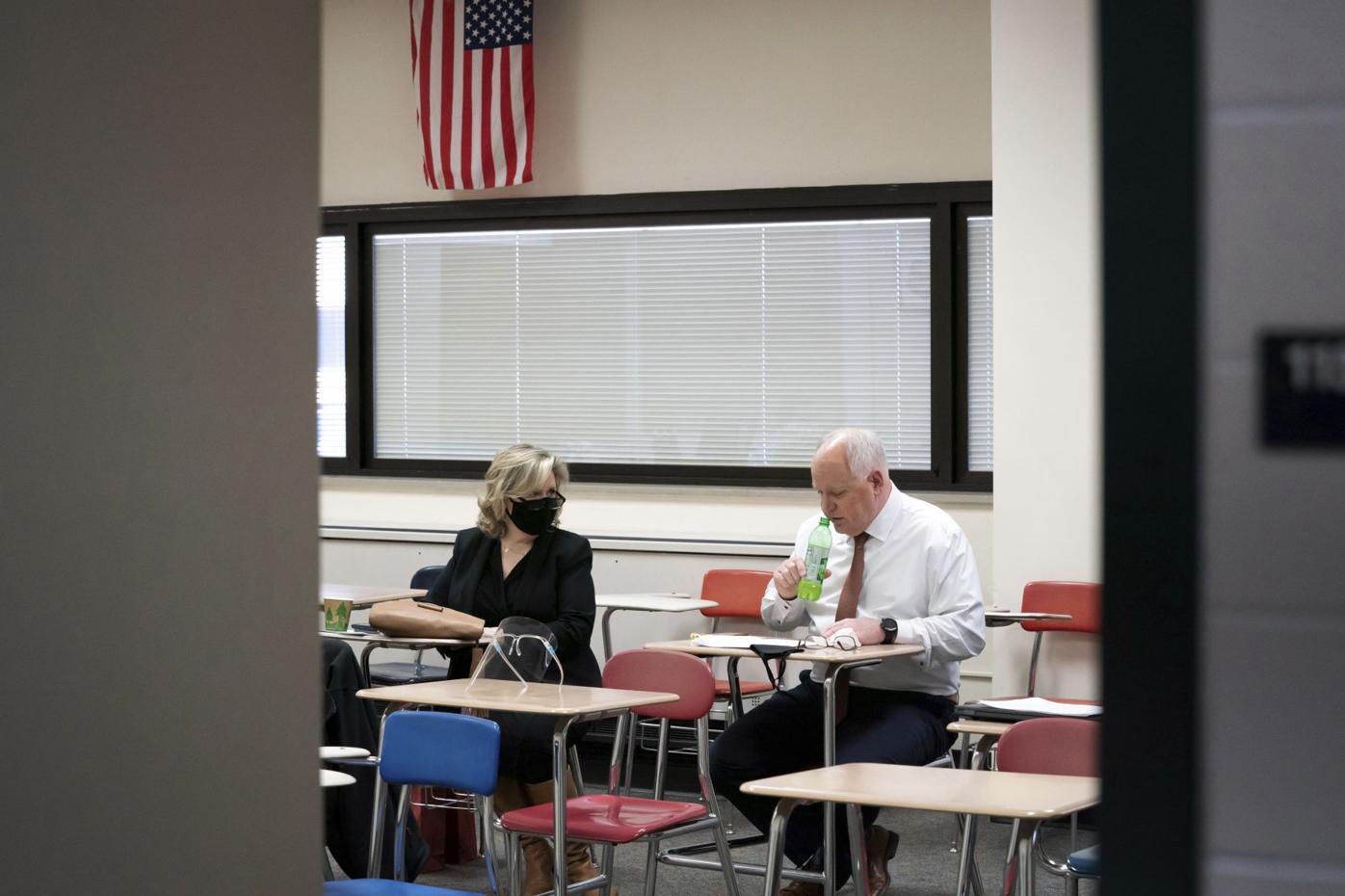 Gov. Tim Walz went over his address with First Lady Gwen Walz as he prepared to deliver his third State of the State address Sunday, March 28, 2021 from his old classroom at Mankato West High School in Mankato, Minn. (Glen Stubbe/Star Tribune via AP, Pool) 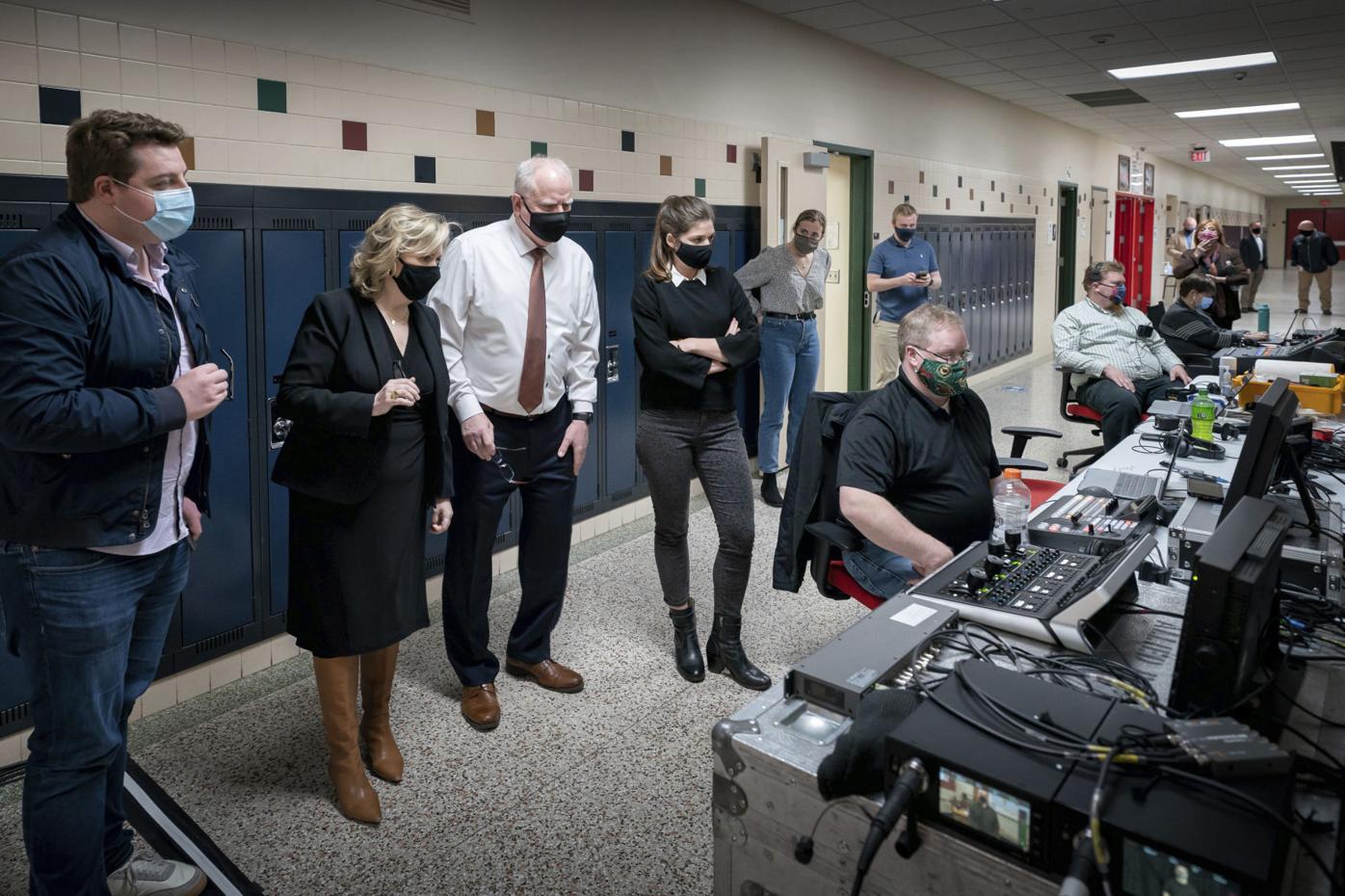 Gov. Tim Walz went over his address with First Lady Gwen Walz as he prepared to deliver his third State of the State address Sunday, March 28, 2021 from his old classroom at Mankato West High School in Mankato, Minn. (Glen Stubbe/Star Tribune via AP, Pool)

Speaking from a Mankato classroom where the DFL governor once taught, Walz struck an optimistic note that the end of the COVID-19 crisis is nearing and “normalcy is on the horizon.” But he said it will take joint purpose to assure that the road back is open to all, saying “for too many getting back to normal isn’t good enough.”

“We’ve proven that we are willing to love and sacrifice for one another — through hardship and heartbreak. We’ve shown that a team, weary from loss with the odds stacked against us, can come together, dig deep and persevere,” Walz said in an advance copy of the roughly 20-minute speech. “This is the spirit that will bring a new day. This is the spirit that will usher in equality and dignity.”

The annual address was delivered in solo fashion rather than to a session of the Legislature for the second straight year.

It comes as vaccinations are set to expand widely but also as coronavirus variants spread in nagging fashion. And it fell on the eve of opening statements in the Derek Chauvin murder trial in the death of George Floyd.

The trial of the former Minneapolis police officer, which is attracting worldwide attention, has the city and Minnesota in general on edge. After Floyd’s death last May, racial justice protests spurred some changes but damaging bouts of civil unrest also inflamed tensions.

Walz quoted Dr. Martin Luther King Jr. in his remarks, noting how the civil rights leader once spoke at the same Mankato West High School. He said the preacher’s call for change must be heeded again, but he urged the public to do so through nonviolent action.

The coronavirus pandemic has consumed most of the governor’s time and attention over the past 12 months. More than 515,000 coronavirus cases have been detected through testing — though officials say the true number was probably much more — and 6,830 have died from complications.

Walz said Minnesota is well-positioned to contain future spread as more people access vaccines. Starting Tuesday, anyone older than 16 will qualify for a shot. More than 80 percent of those older than 65 — considered to be most at risk of severe COVID-19 bouts or death — are already vaccinated.

Walz has set a goal of having Minnesota be the first state to get to an 80 percent vaccination target. It is a ways away now.

He cautioned people against letting down their guard too soon, suggesting that even the promise of early spring can give way to a cruel comeuppance.

“We must remain vigilant. The only way we will truly beat this virus is by continuing to socially distance, wear a mask, and get tested,” he said. “Most importantly, Minnesotans need to get vaccinated.”

In a response provided ahead of the governor’s remarks, Republican Senate Majority Leader Paul Gazelka said Walz should soon tell Minnesotans when he intends to end the COVID-19 emergency and give up unilateral authority to make policy.

“We're asking the governor for clear guidance of when he will lift the emergency powers,” he said. “We think they should have been lifted long ago, but when will he do it?"

Gazelka, of East Gull Lake, gave former President Donald Trump credit for the rapid development of a vaccine, and said that people are eager to resume normal life. Gazelka also repeated Senate Republicans' position on passing a new two-year state budget, which he said will be crafted without increasing taxes.

Walz has proposed higher taxes on top earners and on some businesses. That may be difficult to enact, given Minnesota has a projected $1.6 billion budget surplus, and billions of dollars are on the way from the latest federal relief bill.

Governors typically use their State of the State speeches as a grand stage to push legislative initiatives.

In this case, the Legislature is past the midway point of a session focused on crafting a new budget.

So Walz breezed through what he considers the most important elements of his agenda: adequately boosting funding and reducing achievement barriers around education; pulling up businesses that were battered during coronavirus slowdowns; and making more changes to overhaul criminal justice and societal structures that have furthered Minnesota’s racial divides.

“The stakes are high,” the governor said, “and we have proven that we are up to the challenge.”