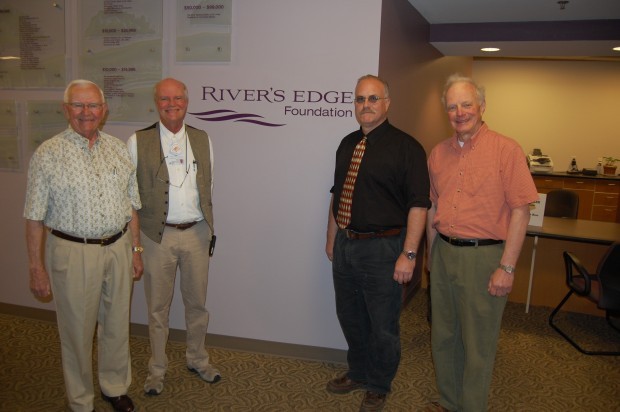 Four generations of St. Peter pharmacy history gathered recently at River's Edge Hospital & Clinic to talk about their family businesses and the importance the city of St. Peter meant to them. (Kurt Hildebrandt/St. Peter Herald) 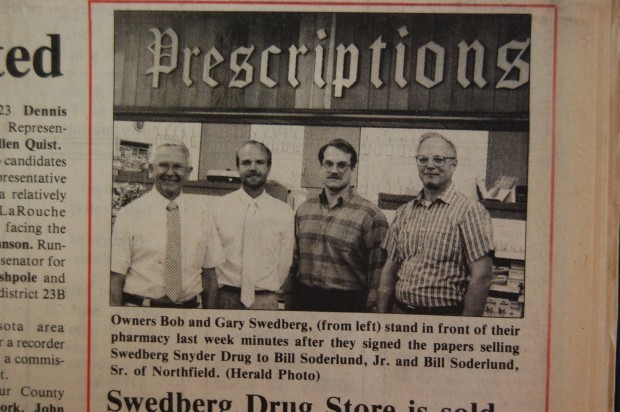 The Swedbergs and Soderlunds as they appeared in the Herald back in September 1986 when it was announced the Soderlunds had purchased the local Snyder Drug store. (Kurt Hildebrandt/St. Peter Herald)

Four generations of St. Peter pharmacy history gathered recently at River's Edge Hospital & Clinic to talk about their family businesses and the importance the city of St. Peter meant to them. (Kurt Hildebrandt/St. Peter Herald)

The Swedbergs and Soderlunds as they appeared in the Herald back in September 1986 when it was announced the Soderlunds had purchased the local Snyder Drug store. (Kurt Hildebrandt/St. Peter Herald)

A recent donation of a piece of much-needed hospital equipment to River's Edge Hospital and Clinic brought together two families whose names have a rich history in the St. Peter business and health care communities.

The donation of a new portable medication compounding unit by Bill Soderlund to the hospital/clinic's pharmacy department, which is run by Gary Swedberg, reconnected two families who have nearly six decades of service as one of the local pharmacies in town.

Gary Swedberg's father Bob, who still resides in St. Peter, bought a drug store back in 1955 which was then located on the 300 block of South Minnesota Avenue where the current Riley-Tanis Law Office is now. Bob ran the business until 1977 when his son Gary came on as a partner and they remained in business together until 1986 when they sold the store to Bill Soderlund, Sr., who also owned a store in Northfield at the time. The Soderlund family remained owners of the store for the next 23 years or so before it was finally sold to an out of town buyer in 2009 and was recently sold to Shopko.

"Before we moved here anyone wanting to open a drug store in Minnesota and elsewhere had to have a liquor license and basically the business I bought when we came here back then had been mainly a liquor store because I went through the stores records I found out they hadn't filled a regular prescription since 1927," Bob said. "But the times changed and the business did, too."

Bob remembers fondly the small building where the store was originally housed on South Minnesota Avenue. It was a much smaller location than where it was eventually moved to, at the site of the old Buick garage at the southeast corner of Park Row Street and South Third Street.

"It was a great location and I remember the time when all of the business owners on that side of the block decided to fix up the backs of our buildings and put in the new parking lot," Bob said. "We really fixed that area up  nice and everyone of the businesses along that block chipped in to pay for those improvements.

"Then we used to hold backyard sales in that area and it really brought a lot of people downtown."

The business, named Village Drug, eventually became a Snyder Drug Store affiliate offering not only pharmacy service but also a full line of merchandise as well as gift items.

Eventually his son Gary, who spent many hours during his childhood hanging around his family's store, graduated from St. Peter High School and went on to attend pharmacy school at the University of Minnesota, where Bob also attended.

Gary came on staff as a pharmacist in 1977 and remained there until 1985 when he moved out to work at the State Hospital for the next 15 or so years.

Bob eventually sold the business to the Soderlund family in 1986 because the time was right.

"It was time to go and I was very excited to find someone like Bill to take over the store," Bob said. "They have been great to the community all those years they owned the store and it definitely was a good move for all involved when we sold it to them."

Bill Soderlund, Sr., was very impressed when he first learned that Village Drug was on the market and he made the trek over from Northfield to take a look at Swedberg's store.

"There were a lot of similarities between our store in Northfield and the one here in St. Peter," Bill, Sr., said. "It just seemed like a great fit for us and it proved to be true. Bob and Gary did a wonderful job in building the business to what it was and our goal was to keep up that level of service the people here came to expect."

Bill's son, Bill Soderlund, Jr., who hung around his father's store during his childhood years but had been working as a carpenter in the Twin Cities at one point in his working life, came on board early on to manage the St. Peter store at first and eventually went back to school to get his pharmacy degree.

"Since I was managing a pharmacy, I figured it made perfect business sense for me to get my pharmacy degree so I headed back to college at Drake University (Des Moines, Iowa)," Bill, Jr., said. "It was definitely a unique situation going back to college, but we made it work.

"When I was growing up I always kind of figured I'd go into the family business and it definitely turned out to be a great move for me."

Soderlund Drug eventually evolved away from the Snyder name and operated as an independent store. Bill, Jr., eventually bought the store from his father in 1996 and continued to operate it with the help of his brother Patrick and the rest of the "devoted staff" that worked for the Soderlunds.

Bill, Jr., eventually got more involved in the veterinary pharmaceutical business and that operation eventually occupied the back half of their building. That venture cut the retail space down for the Soderlund Drug operations but Bill, Jr., continued to make a name for the store by putting together a pharmacy history display in part of that area and began offering free root beer (1919) to his customers.

"I used to stop at Wall Drug when ever I traveled through that area and I was always amazed at what they did there," he said. "They also were famous for offering free water and I wanted to go one step further than that and that is how the free root beer started."

As the store continued to operate, the Veterinary Pharmacy business grew to the point where Bill needed more room and he eventually sold the store and moved his other business to a much larger building in the city of St. Peter's North Industrial Park.

The families' legacy lives on

The Swedberg and Soderlund families may not own the downtown drug store anymore but they still have a very strong presence in the community.

Bill Soderlund, Jr., employs about 12 people at his Veterinary Pharmacy business and his recent donation of the portable compounding unit to River's Edge helped reconnect the families once again.

"I'm really into the history of the pharmacy business and when I set up my museum at our store downtown I relied a lot on the knowledge of my own father but I called Bob Swedberg a lot as well," Bill, Jr., said. "When you think about it, we both have a lot of history in this community and St. Peter has come to mean a great deal to all of us as well."

Kurt Hildebrandt is the News Editor for the St. Peter Herald. He can be reached at (507) 934-3655 or khildebrandt@stpeterherald.com.