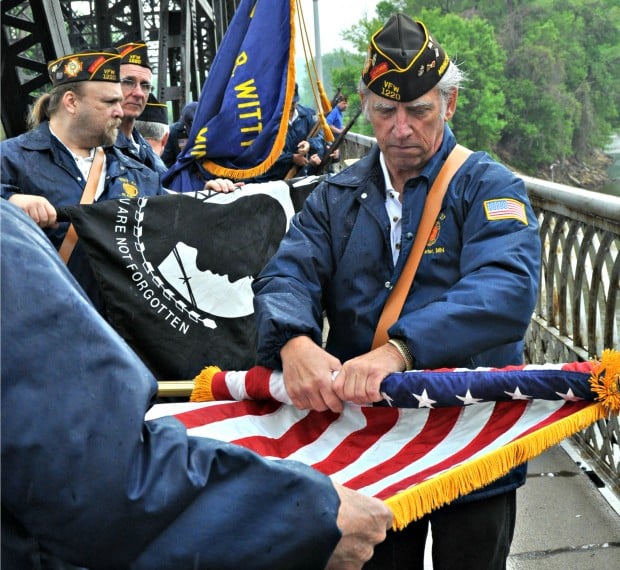 Members of the American Legion color-guard gather on the Highway 99/Broadway Bridge to honor veterans lost or buried at sea. (Herald file photo) 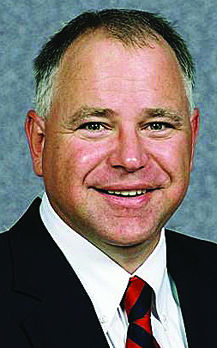 Not just those that served in Vietnam or the other ‘great’ wars.

“I tell you, in the past 10 years we’ve had a couple wars going on,” Idso said. “We’ve been creating lot of new veterans and creating new causalities. Plus you have the old veterans like me from Vietnam or Korea.”

“Memorial Day is for all of us … It’s a time to come together and think about those who served, those who were injured, those who lost their live and those who came home.”

St. Peter residents have a chance to honor all veterans, men and women, May 26, Idso said. In honor of Memorial Day, the St. Peter American Legion holds a special ceremony for departed veterans 10:30 a.m. in Minnesota Square Park.

This year’s program features speakers of all ages, representing veterans of all wars, Idso said.

The keynote speaker is U.S. Rep. Tim Walz, D-Mankato, a retired command sgt. major with the Army National Guard. Walz served in Italy with his battalion in support of Operation Enduring Freedom and the highest ranking enlisted man to ever serve in Congress.

Walz is also set to speak at the Cleveland Memorial Day program later that morning.

To accommodate Walz’s schedule, the Cleveland Memorial Day program will start at 11 a.m. Monday, one hour later than its usual time.

The ceremony will be held at the Cleveland Lutheran cemetery, a quarter mile south of of town.

Representing Minnesota’s First Congressional District, Walz is currently serving his fourth term in the U.S. House of Representatives. He serves on the House Veterans Affairs Committee.

In St. Peter, Walz is preceded by Michael McLaughlin, of the Minnesota Assistance Council for Veterans.

“He’s actually an outreach caseworker for the Minnesota Assistance Council for Veterans,” Idso said “His whole job is to help returning veterans.”

“I think it’s good to recognize we have young people involved and we have females,” Idso said of Christoffels’ inclusion in the program. “It’s not just us old guys.”

Playing music at the event is the St. Peter High School Band and Governaires Drum and Bugle Corps. The groups are to perform several patriotic songs and crowd favorites including, “You’re a Grand Old Flag,” “America the Beautiful,” “God Bless the USA” and more, Idso said.

Their musical interludes are Idso’s favorite part of Memorial Day.

“The music is so familiar, whether you’re 90 or you’re a little kid,” Idso said. “These are familiar songs and I think they unite us.”

Following the program in the park there will be honors for any veteran lost or buried at sea. The American Legion color guard will gather on the Hwy. 22 bridge and fire a 21-gun salute over the Minnesota River.

Idso said the salute is a fitting end to the Memorial Day service, adding that recognizing those who have died in service to the Navy or Coast Guard pays tribute to “a whole different aspect of the sacrifices that our soldiers are sometimes required to give.”

A potluck at the American Legion is planned afterward.

9:30 a.m. service at the Kasota Hill Cemetery with lunch to follow.

Placing of the wreath:

Following the program in the park there will be honors for the people lost or buried at sea on the Hwy. 22 bridge.