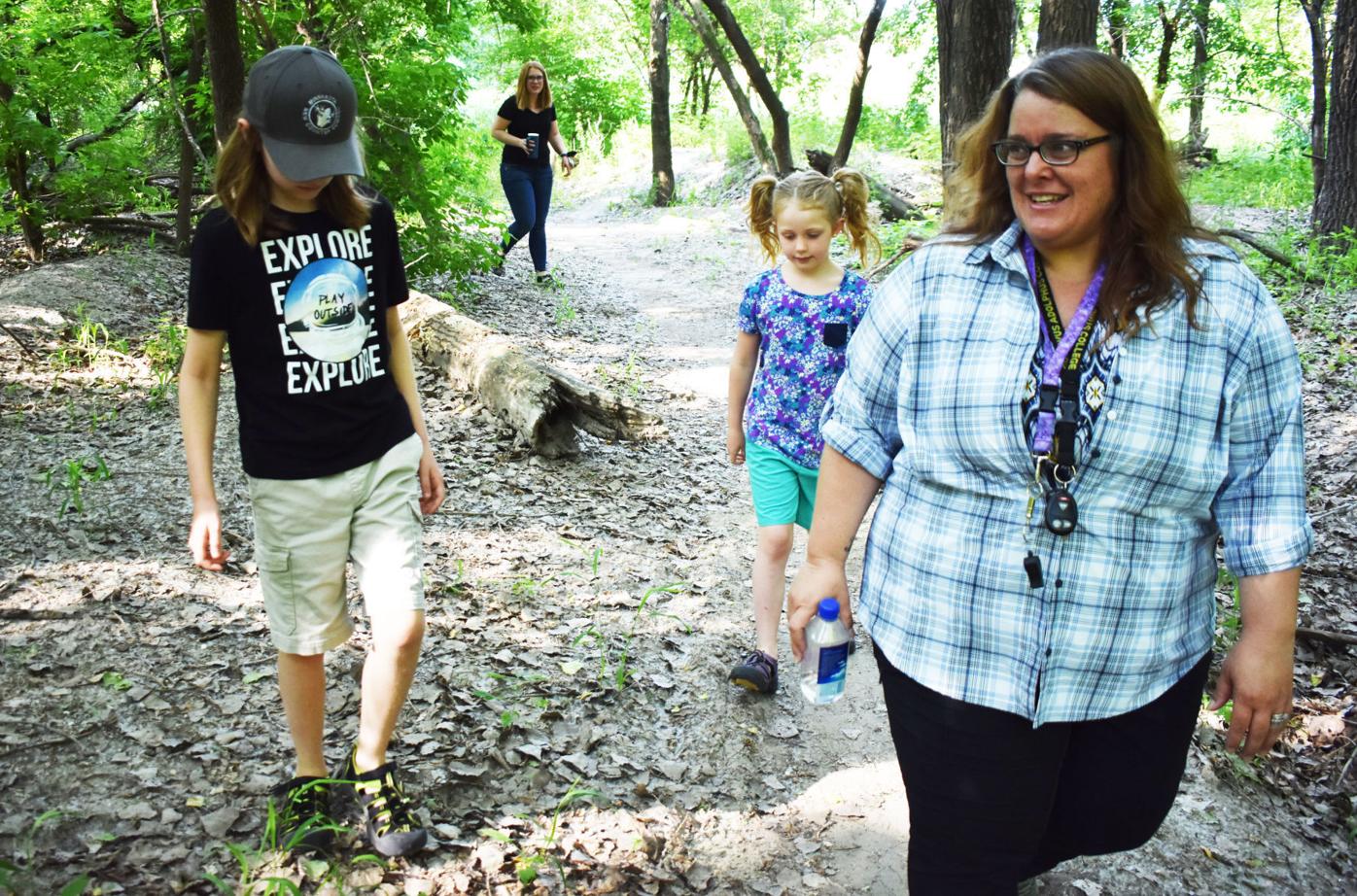 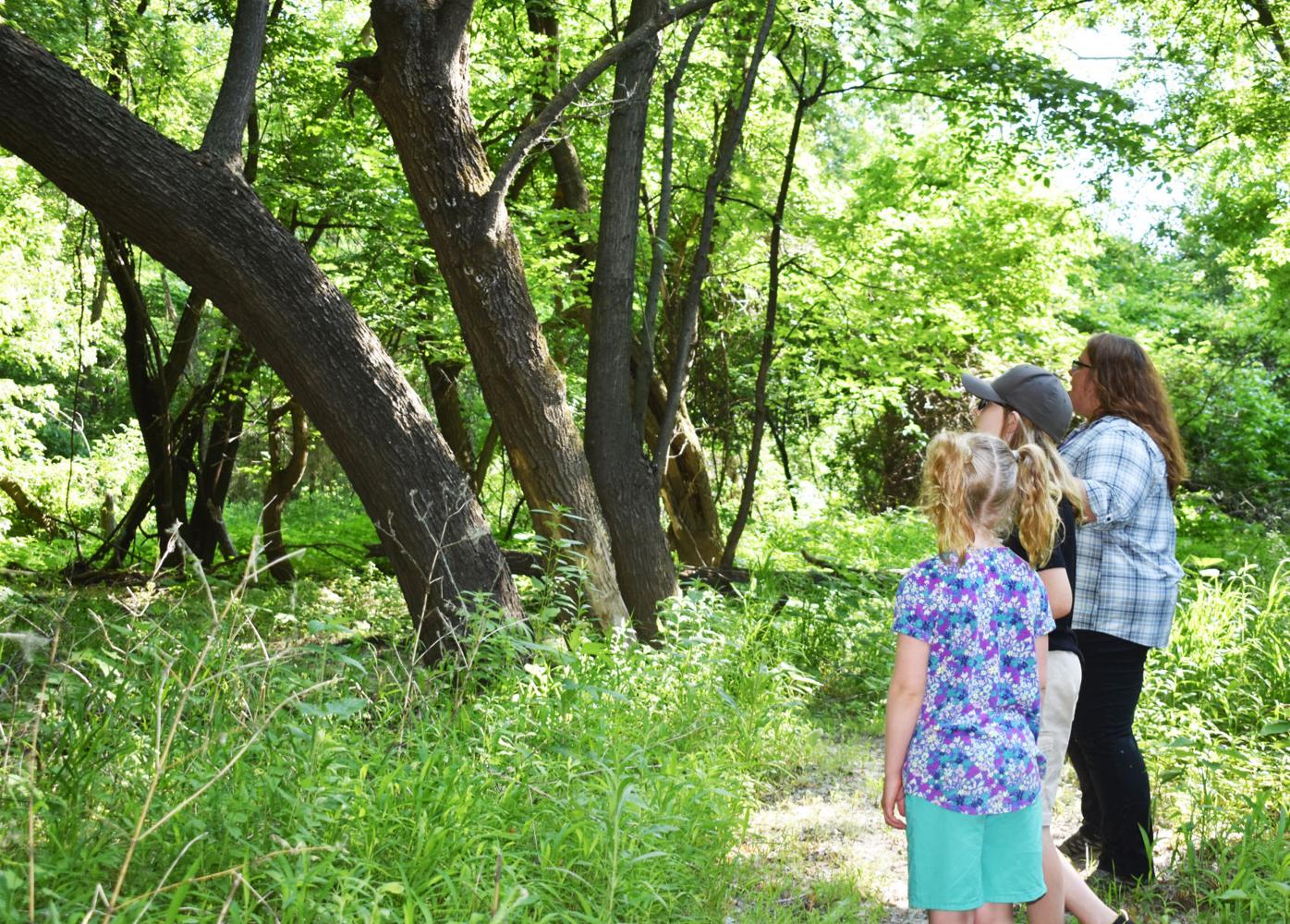 Trish Hiscock-Austin and Calvin and Kylie Kuhlman check out some of the natural landscape in a woods in northeast St. Peter. (Philip Weyhe/southernminn.com) 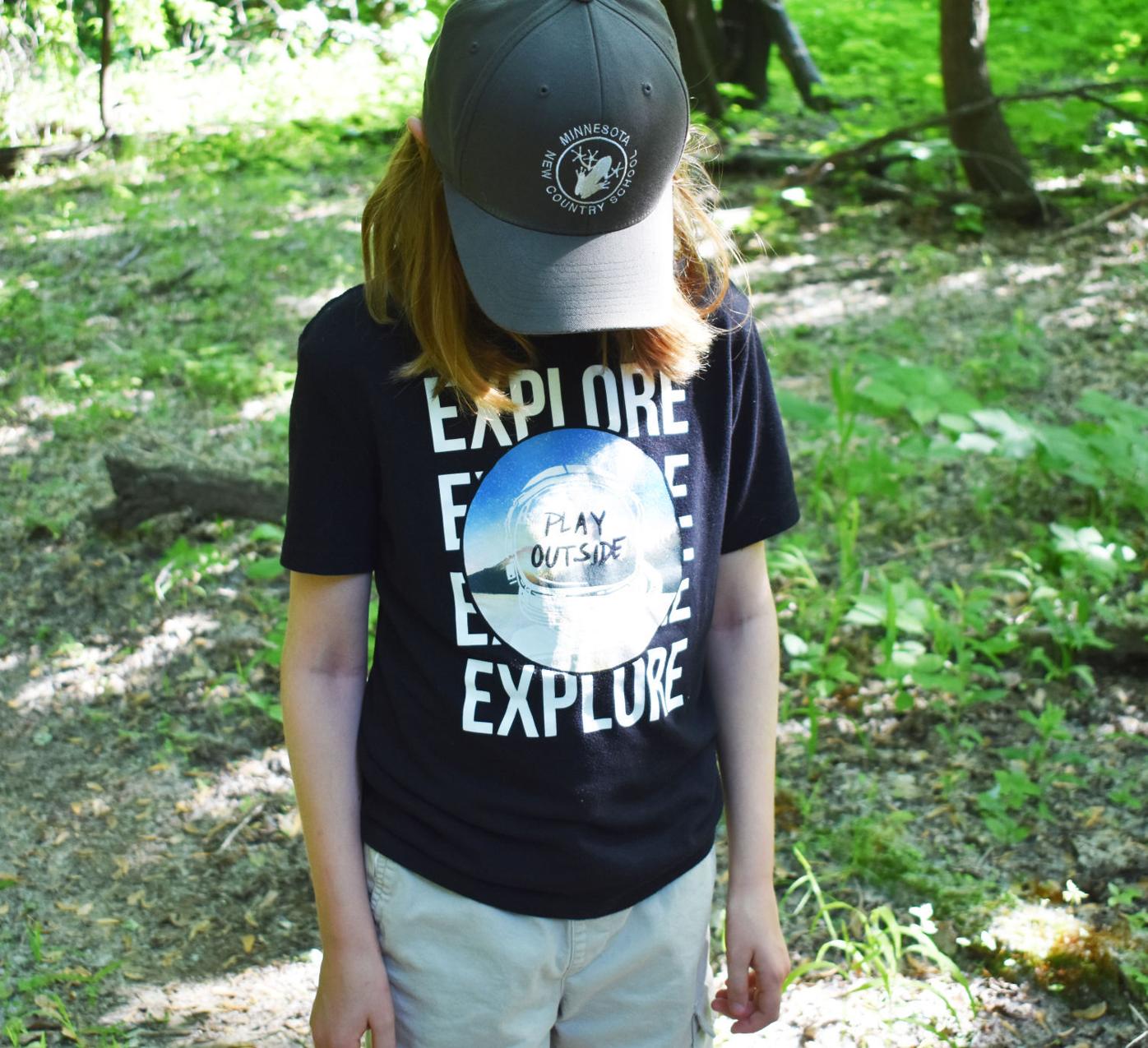 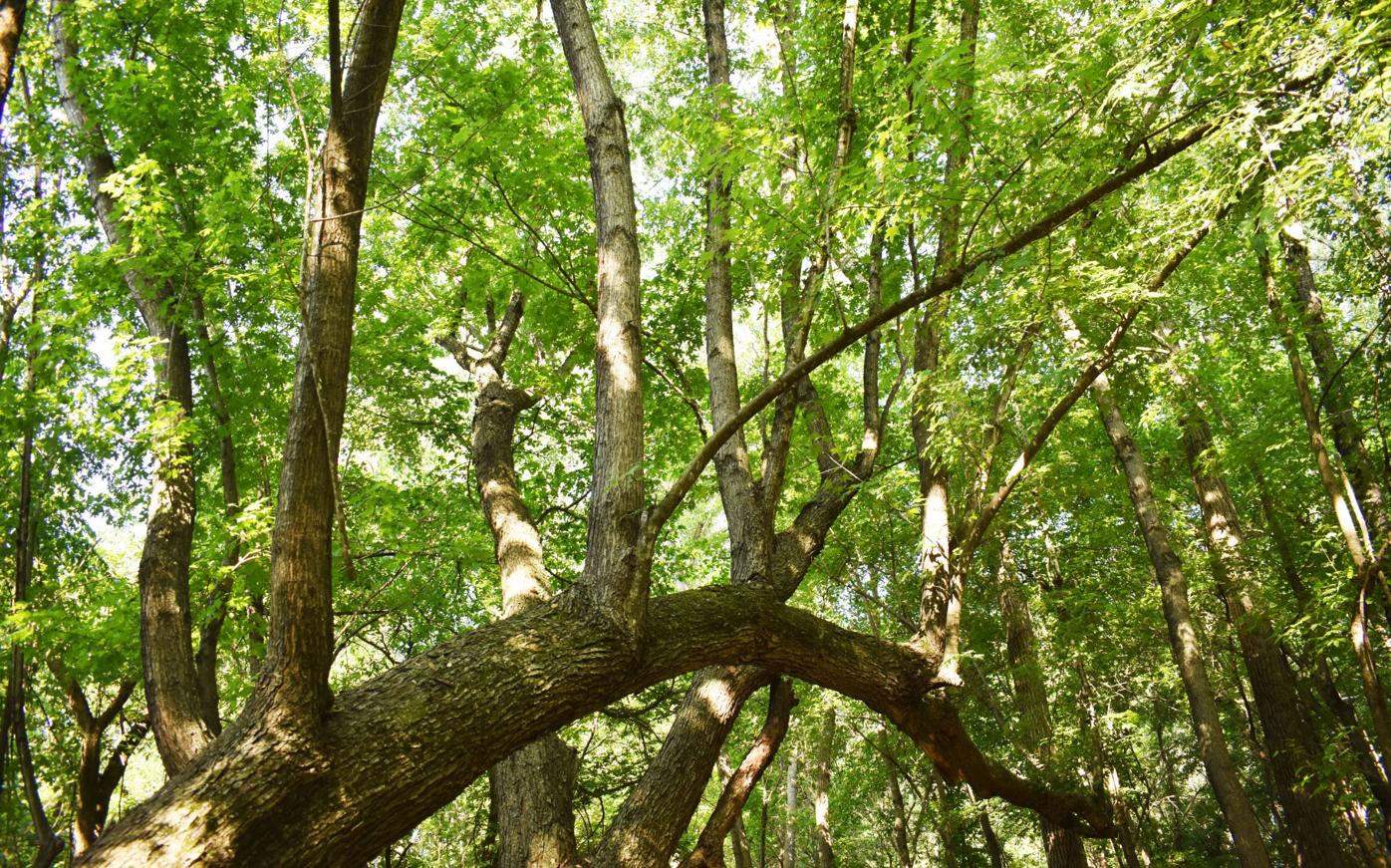 This tree in a St. Peter woods is bent horizontally, with several branches sticking straight up toward the sky. (Philip Weyhe/southernminn.com)

To Trish Hiscock-Austin, “into the woods” isn’t a frightening proposition; it’s an essential experience — or at least she’d like it to be, especially for kids.

“I don’t use the word ‘play’ lightly; that word means a lot to me,” she said. “Kids spend a lot of time in different settings doing school lessons and things their parents planned for them. I’m a huge advocate for creating spaces where kids are allowed to play freely.”

Hiscock-Austin is the founder and operator of the new St. Peter nonprofit Grass & Roots Outdoors, which will offer a number of options to get kids and families into natural spaces. The programs start in June with walkabouts at 7-Mile Creek Park and Teen Trails at South Traverse. After that, the more in depth opportunities begin in July, including Knee-High Naturalists (ages 4 and 5), Earth Protectors (ages 6 to 8), and Into The Woods (ages 9 and older).

The walkabouts are for families and give locals the chance to meet Hiscock-Austin. They will involve simple activities, like walking trails and playing in the creek. It’s open to all ages and no sign-ups are reuired for that one. The teen trails activity, meanwhile, is designed as a space for older kids to just get used to some local trails and be outside together.

The July programming is week long, and there are limited spots available. That’s where Hiscock-Austin will get more specific with the programming, coming up with creative ways to not only get the kids into the natural environment, but to connect them with it.

Formerly a worker at Minnesota New Country School, where she led many an expedition into the woods, Hiscock-Austin said she has seen what those natural settings can do for children, and she wants that to be offered to any kids who might not get regular exposure.

“We’re really looking to do something that hasn’t maybe been available,” Hiscock-Austin said. “I know, as a mom, if I want to go out to the woods and build some forts, do some hikes, I could organize that on my own. But if I wanted it to be a program, there is not a lot of options for that.”

She also wants the programming to be accessible. So while the July programming does have set weekly fees, she is also utilizing the Stone Soup Inclusive Community initiative.

“We have this idea around this book that many of us educators have; it’s called ‘Stone Soup,’” Hiscock-Austin explained. “The idea in that book is that everyone comes to this place with what they can to make this soup.”

She continued, “So I set up programs where people are able to contribute what they’re able to and participate. If you can pay for the fee, great, but if there is a different way, then let’s do that. If it means you’ll be an additional grownup that can provide supervision, great. If you can provide used gear, cool. We’re just looking for different ways to get people connected and not always pay for it.”

Kylie Kuhlman, mom to Calvin and Sylvie, who both know Hiscock-Austin from MNCS, already has her kids signed up for Grass & Roots programming. Their family makes a habit of getting out in nature.

“We do a lot of camping and also just a lot of getting out and hiking,” Kuhlman said. “As an adult, I feel very centered in nature; I feel very happy and calm. And that’s something I want for my kids. I want it to be a place they have in their lives to turn to and that they seek out.”

“She’s getting kids out on trails to explore, for free play, for exercise, fresh air, socialization,” Kuhlman said. “I get to spend a lot of time with my kids out in the woods, but having a place to go do that with someone else and sharing that with friends is really important to me.”

She added, “I think it’s a really unique model from what we have in the community. It’s structured to be unstructured. Giving kids the chance to have free rein in a supervised setting is really important.”

Both Calvin and Sylvie agreed with their mom that Grass & Roots is a good idea, agreeing that it’s “just really fun” to get out on trails. That’s music to the ears of Hiscock-Austin, who believes it’s the older kids (adults) job to help the younger kids find nature.

“When playing in the woods, there is this freedom that will allow the kids to reset themselves,” she said. “I’ve seen it so many times. It can be really calming, but it can also be really energizing for a kid at the same time; that’s kind of a special place … We have to make the space for kids to do that.”

Signup and more information on Grass & Roots Outdoors can be found at grassandrootsoutdoors.org. There are tabs on the site for June Walkabouts and Teen Trails, along with with July One-Week Adventures.

The July programming comes with a weekly fee, but the nonprofit also offers other ways to pay by contributing to the programming.

The first Walkabout takes place noon to 2 p.m. June 15 at 7-Mile Creek Park. No registration is required for that activity, and it is free to families. All ages welcome.