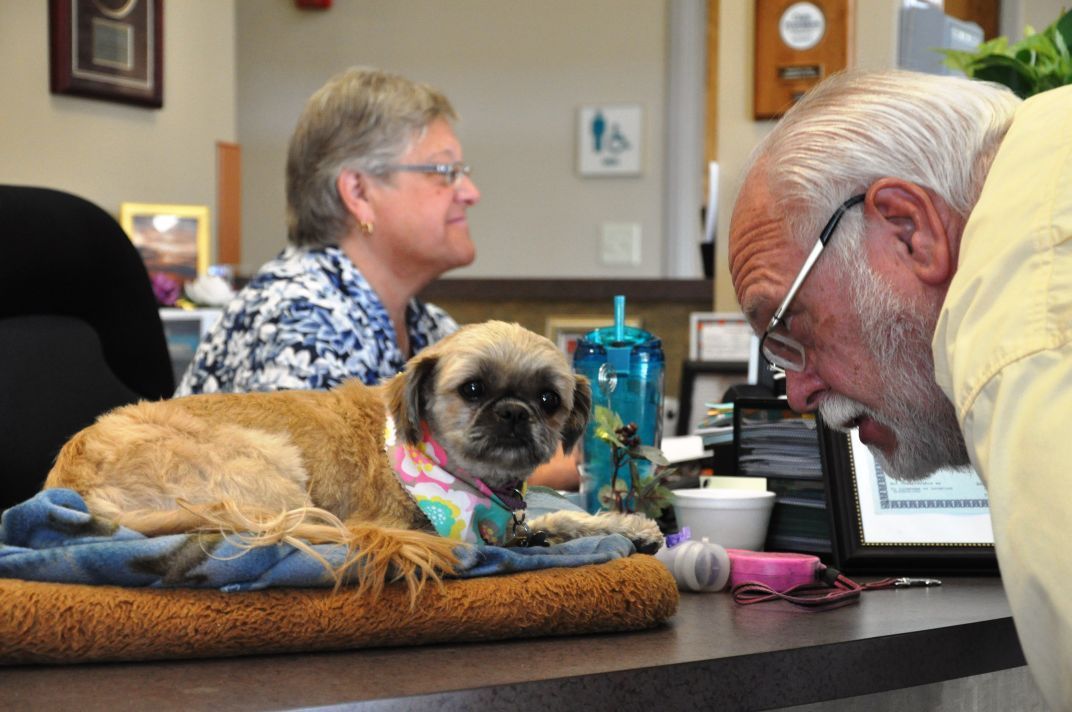 Mark Probst (right) of Mankato took a break from his volunteer services at the Benedictine Living Community in St. Peter to share a few words with the resident pet dog, Luci, who’s been a staple there for eight years. Mary Hergert, Health Care Coordinator at Benedictine, stays focused at work. (Dana Melius/St. Peter Herald) 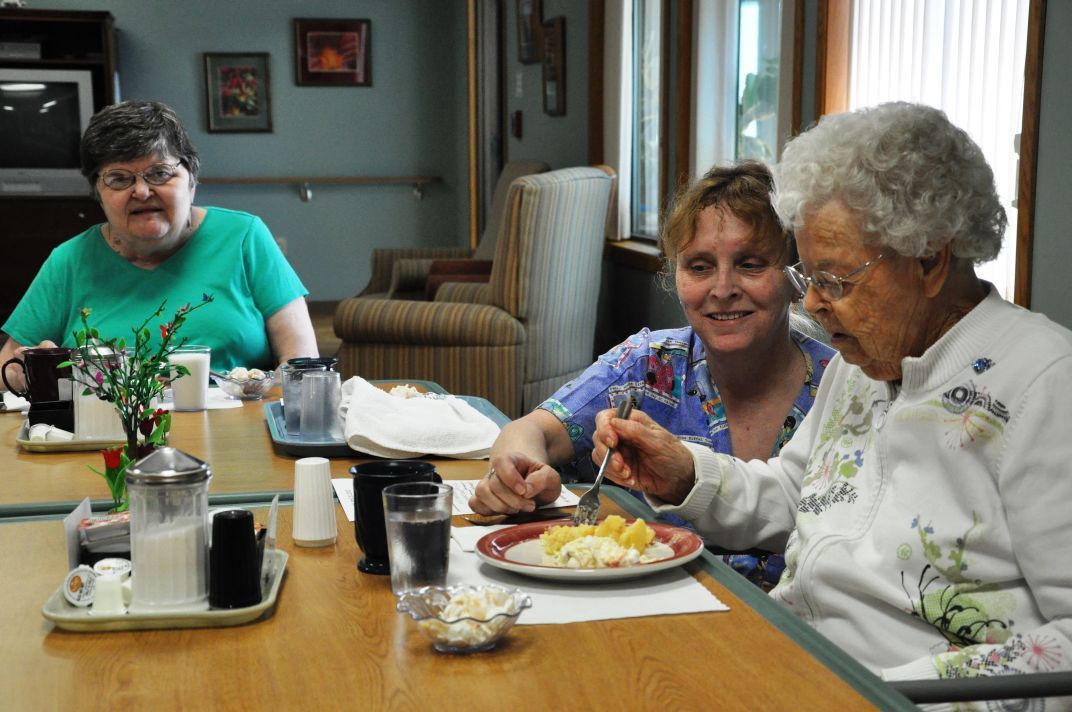 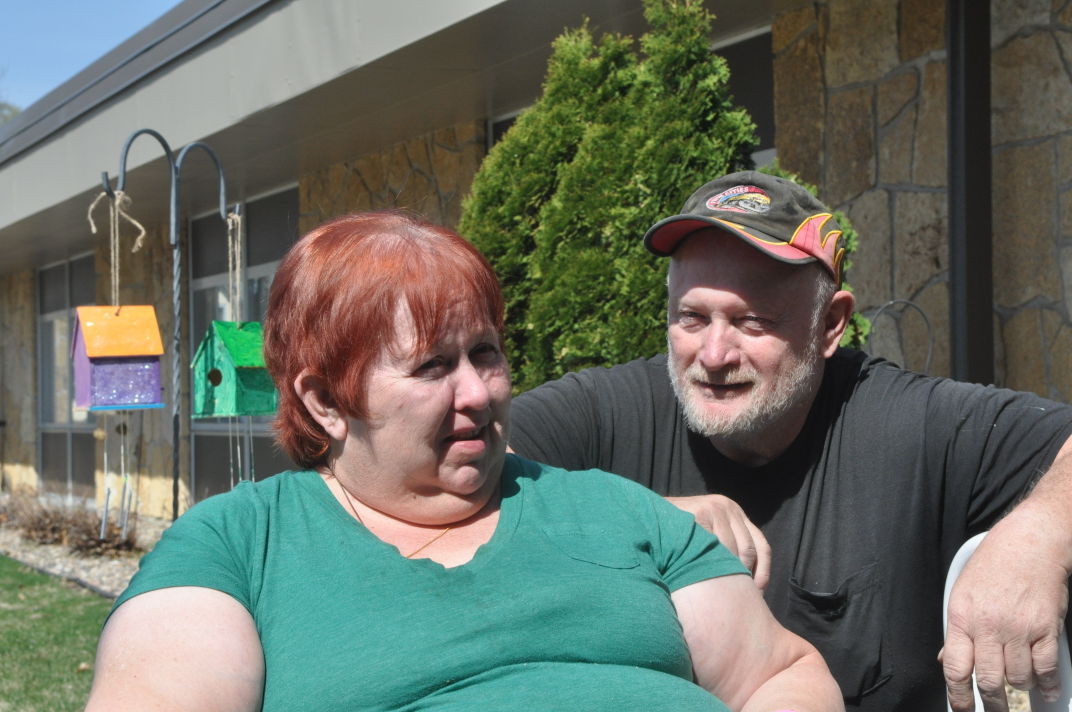 Pam Frasher, who used to work as a nurse at the Minnesota Valley Health Center before a stroke, is now a resident. Husband Bill, who lives in rural Henderson, is a constant visitor to the Le Sueur facility. Both are 65 years old. (Dana Melius/St. Peter Herald) 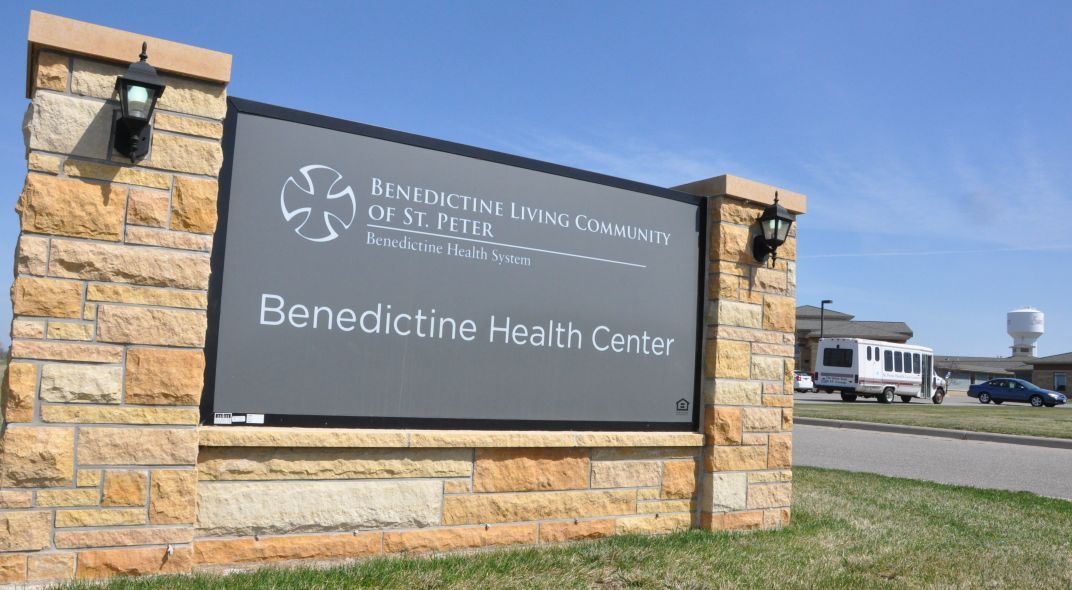 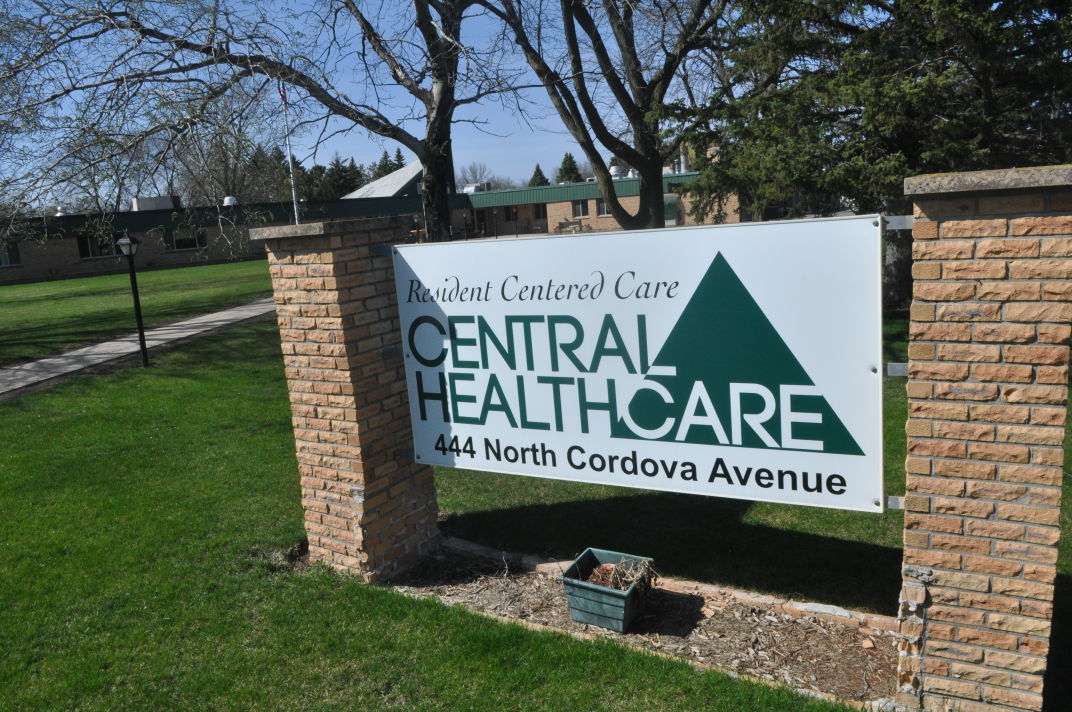 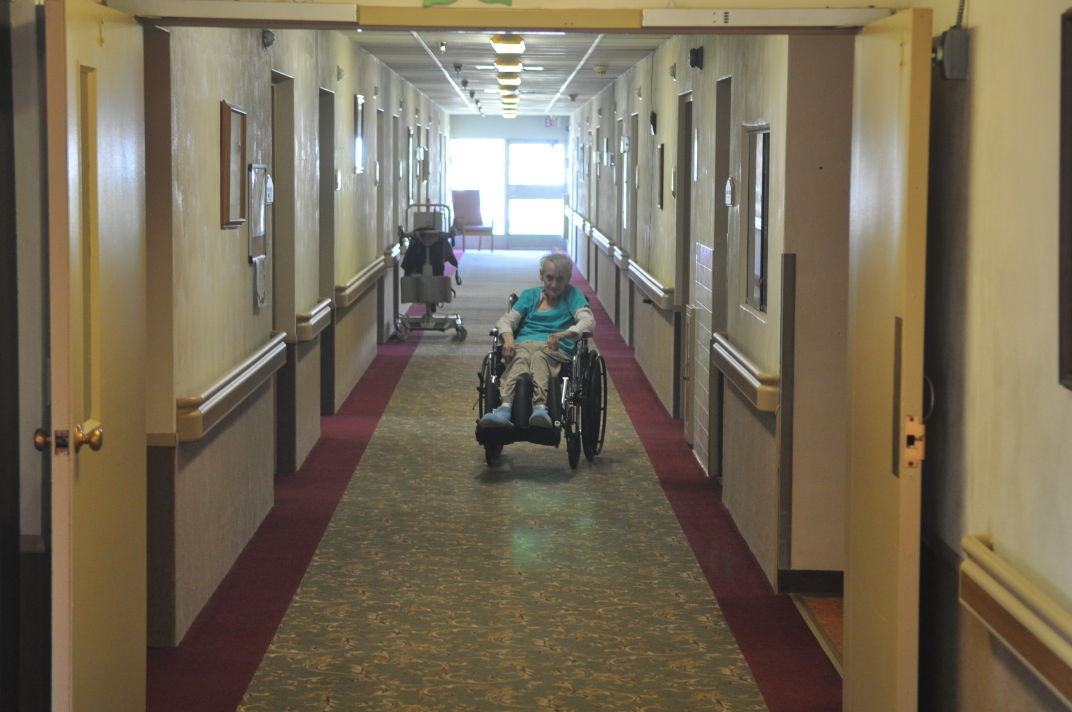 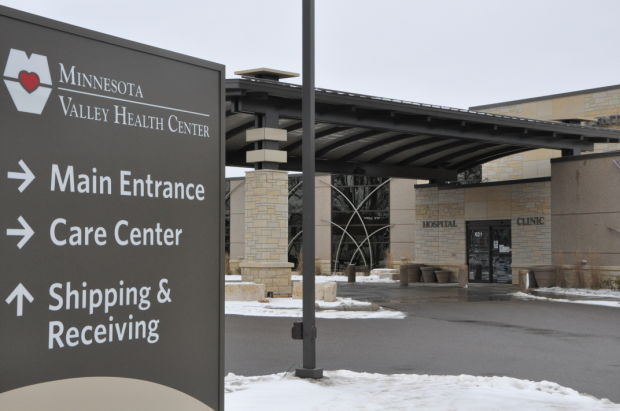 Mark Probst (right) of Mankato took a break from his volunteer services at the Benedictine Living Community in St. Peter to share a few words with the resident pet dog, Luci, who’s been a staple there for eight years. Mary Hergert, Health Care Coordinator at Benedictine, stays focused at work. (Dana Melius/St. Peter Herald)

Pam Frasher, who used to work as a nurse at the Minnesota Valley Health Center before a stroke, is now a resident. Husband Bill, who lives in rural Henderson, is a constant visitor to the Le Sueur facility. Both are 65 years old. (Dana Melius/St. Peter Herald)

For 35 years, Linda Nelsen has dedicated her professional life to long-term care. The past 20 years have not always been easy ones, with nursing home reimbursement rates frozen and pay for workers too low.

“It sounds as if the Legislature might come through this time with more funding,” said Nelsen, administrator and CEO at Benedictine Health Center in St. Peter.

Nelsen last testified before the committee on March 16 and came home optimistic, but cautious. Since 1995, when the Minnesota Legislature froze the reimbursement rate, it’s been a mounting problem for nursing homes, according to Nelsen. And as rural facilities have closed, as St. Peter’s Good Samaritan nursing home did in 2014, and as a worker shortage has added to the problem, legislators on both sides of the aisle have joined the call for reform.

Minnesota nursing home advocates, including Nelsen and other regional nursing home administrators, have testified at the State Capitol often since the 2015 session began in January, helping to shape a $200 million funding increase dedicated to Minnesota’s long-term care industry over the next two years.

“I’ve never seen anything like that,” Nelsen admitted, holding out hope that the bill will find final support in the Minnesota House of Representatives. “There’s strong support for the bill, which will be a significant increase in rates for nursing homes.”

Beginning Monday, the House Aging and Long-Term Care Policy Committee was expected to continue discussions in support of major reforms to address the state’s nursing home reimbursement rates and industry workforce shortages. The measure has received strong bi-partisan support in St. Paul, particularly from rural legislators who represent communities in which nursing home facilities are struggling to survive or are already closed.

Along with increased funding for nursing homes, a separate provision in the bill would expand a student-loan debt forgiveness program for people willing to commit to health care careers, particularly in rural Minnesota. Proponents say the bill could increase reimbursement rates to nursing homes by up to 25 percent.

LuAnn Linn, administrator at the Minnesota Valley Health Center nursing home in Le Sueur, praised the work of first-term Rep. Bob Vogel (R-Elko New Market) and Sen. Kevin Dahle (DFL-Northfield) for their advocacy and support. Linn said that bipartisan support not only came by way of the statewide reform bill, but Vogel and Dahle assisted with an equalization bill targeted solely at the Le Sueur nursing home, which had rates frozen at about $20 per day less than other regional facilities.

“They’re really strong advocates,” said Corrie Eggimann, communications coordinator for MVHC. ”The goal was to have it as a backup because we have been unable to charge as much as other nursing homes in our region.”

Eggimann, Linn and MVHC Director of Nursing Karen Holicky all agreed that the statewide reform effort is the desired result, which should help them sustain nursing staff with better wages. Holicky said nurses in the Minnesota River Valley region can go the Mankato and receive $6 to $10 more per hour, while those willing to travel to the Rochester area might double their wage.

The Le Sueur nursing home has 96 FTE (full-time equivalency) positions, according to Linn, with a capacity 55 residents. While MVHC’s facility has been able to keep enough workers, she said, other rural nursing homes have had to turn away potential residents due to staffing shortages.

Minnesota nursing homes currently have some 3,000 vacant job positions, according to Patti Cullen, president and CEO of Care Providers of Minnesota, one of the state’s leading advocates for nursing homes. Such job vacancies and worker shortages, particularly in rural Minnesota, forced nursing homes to deny an estimated 1,500 admissions in 2014, she said.

At Benedictine in St. Peter, which has a capacity of 79 residents, staffing has remained consistent, according to Nelsen. But she’s talked to many administrators and directors of nursing who have not been so fortunate.

At Central Health Care in Le Center, administrator Carl Pelovsky has a resident capacity of 40. But as one moves away from the Hwy. 169 corridor to the west, or the I-35 corridor to the east, small rural nursing homes like Le Center have difficulty competing for staff. And that means admissions might be denied because a facility doesn’t have enough nursing assistants or nurses to adequately care for a resident.

Pelovsky said the failure by the state to reform the nursing home reimbursement rates has devastated the industry. The state-mandated freeze has cost his Le Center facility upwards of $300,000 annually.

“That’s why we’re all going out of business,” he said. “We shouldn’t have to fight to get our expenses covered.”

Since 2000, at least 69 nursing homes have closed throughout Minnesota. The Good Samaritan Society, a faith-based provider with headquarters in Sioux Falls, South Dakota, has been hit particularly hard. Besides the St. Peter closing of the Grandview Care Center, constructed in 1980, the Good Samaritan Society closed its Glenwood facility in 2014 and in Hoffman one year earlier.

At the time of Grandview’s June 30, 2014 closing, administrator Teresa Hildebrandt said the facility was rarely at capacity due to industry changes. Then licensed to serve 38 residents, Grandview average 28 per day in 2013 and slipped to less than 23 in 2014. Grandview employed about 50 people at the time.

“It’s just so important to keep these facilities in these communities,” she said.

Minnesota’s aging demographic won’t make the issues facing the long-term care industry any easier. According to the State Demographer’s Office, over the next 15 years, about 60,000 Minnesota residents each year will reach 65. In some rural counties, those percentages are tilted even more so toward an aging populace, which will put even more stress on the worker shortage and highlight the need for better wages.

“The difficulty in trying to recruit and retain and find enough care staff will grow as more people get older and need long-term care,” said Nelsen. “There won’t be enough workers to take care of our elderly.”

At Benedictine, besides the 79 skilled care beds, there are 49 apartments in its assisted living community. Nelsen said she has a total of 160 full and part-time employees, representing 95 FTEs. And while many long-term care workers love their jobs and caring for residents, it’s difficult work, according to Nelsen, who’s been at Benedictine the past eight years.

Nelsen also praised the legislative efforts of Sen. Kathy Sheran (DFL-Mankato) and Rep. Clark Johnson (DFL-Mankato) for their ongoing support of nursing home equalization and reforms. This time, according to Nelsen, she sees hope for something significant coming out of St. Paul.

“I’m very excited by it right now,” she said.

The average bill for a private pay nursing home room in the U.S. has risen to $91,000 a year, according to new industry statistics.

In Minnesota, Medicaid and the state's medical assistance program now pay almost 56 percent of such expenses, according to the Department of Human Services. Just over 25 percent of the state's residents are private pay and about 9 percent is by Medicare.