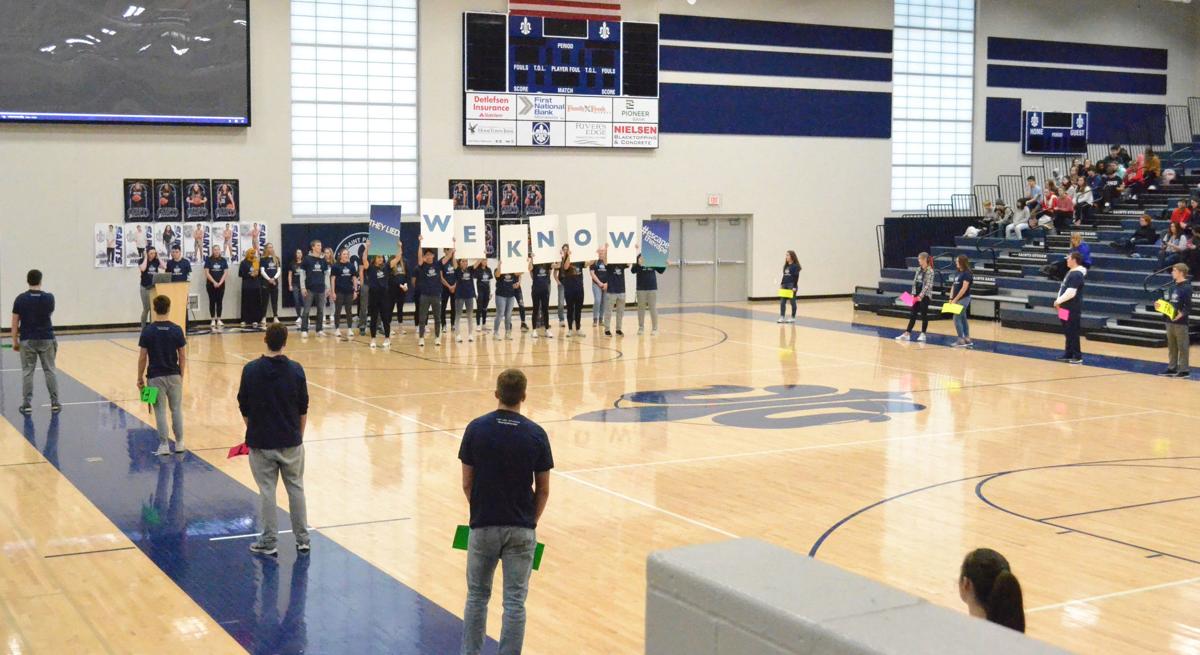 A pep rally at St. Peter High School Thursday, Jan. 9 encouraged students to stay away from vaping, spurred on by Cambria’s They Lied, We Know campaign. (Photo courtesy of Kurt Hildebrandt) 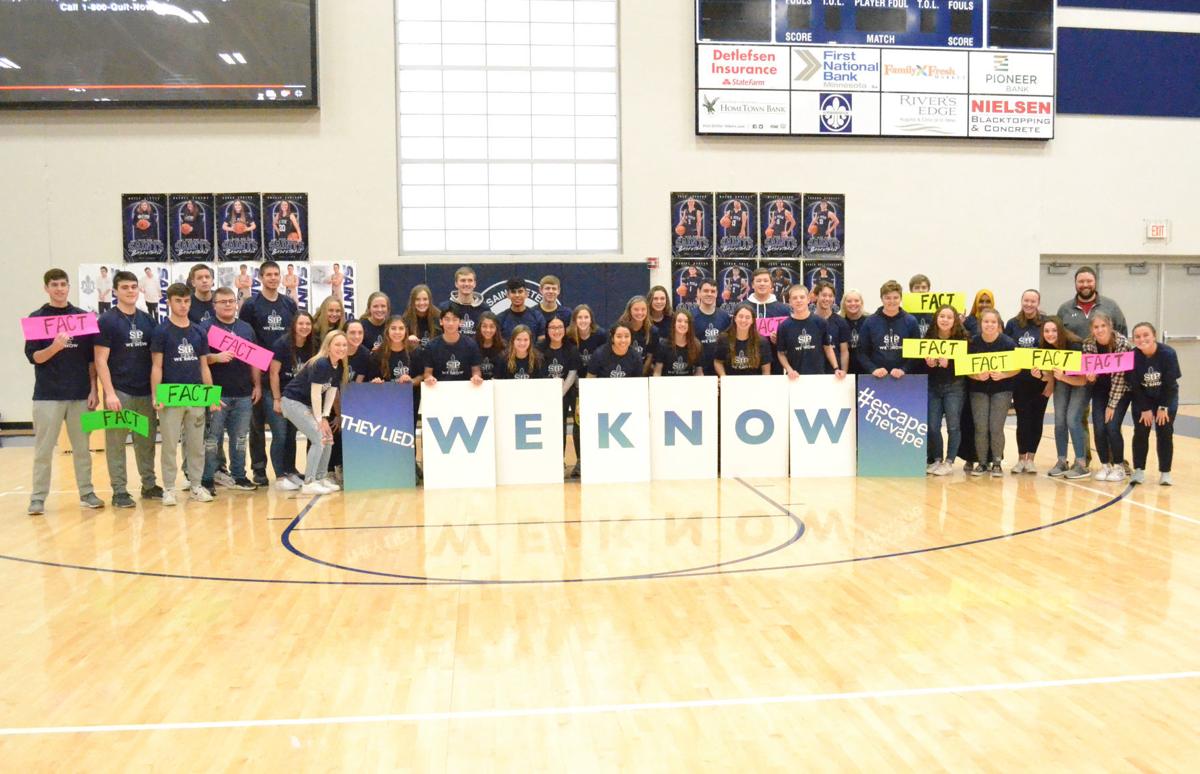 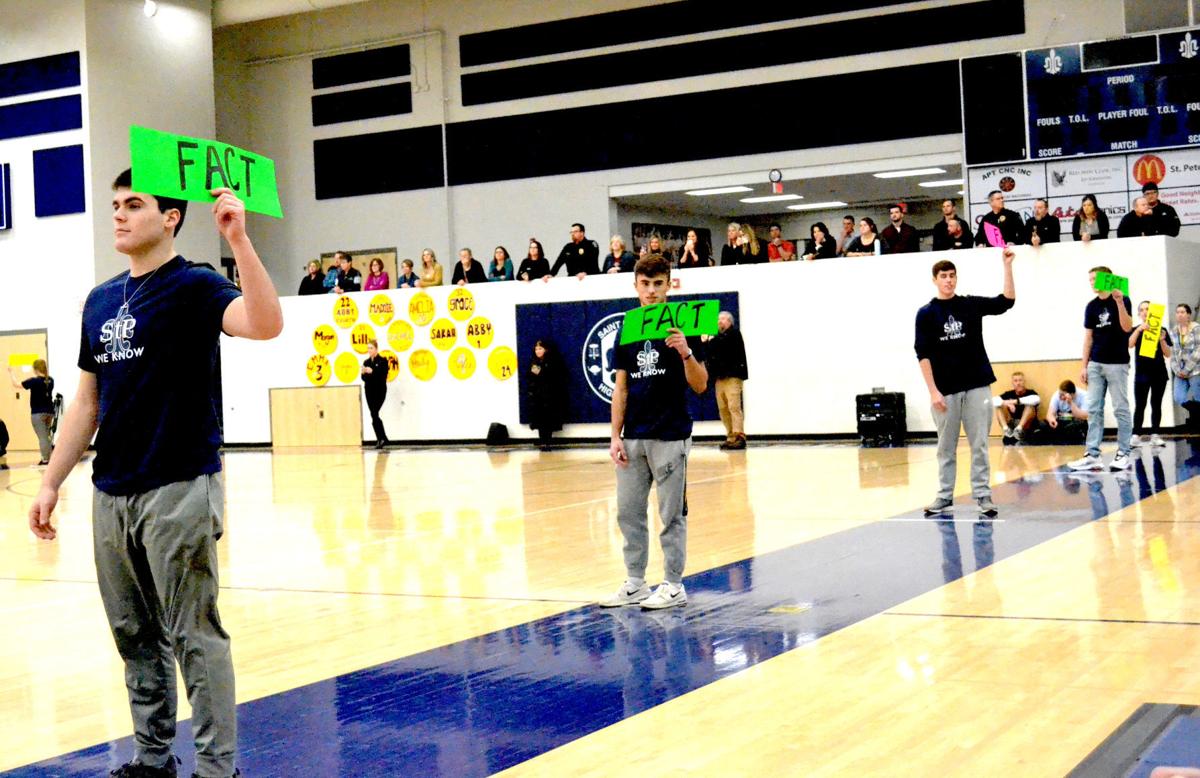 While Project for Teens students didn’t expect an anti-vaping pep rally Jan. 9 to resonate with every students, they hoped it could at least get through to some. (Photo courtesy of Kurt Hildebrandt) 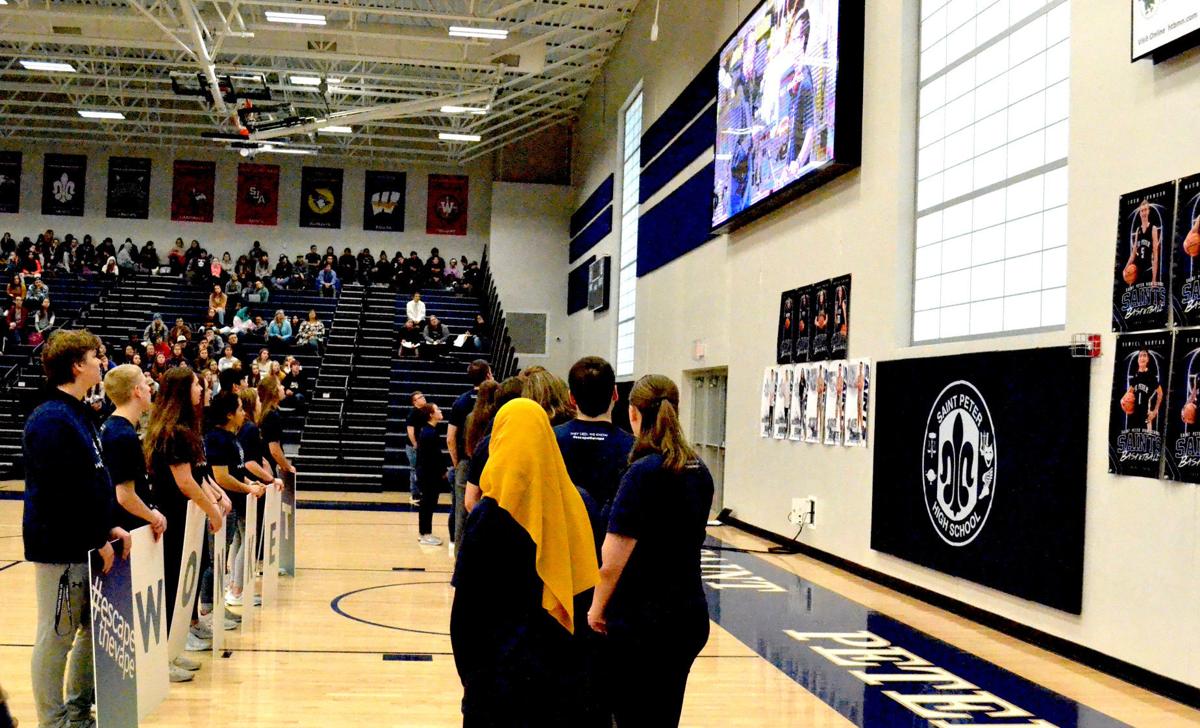 A video, talking about vaping impacts, was played for students at the anti-vaping pep rally, as part of Cambria’s They Lied, We Know campaign. (Photo courtesy of Kurt Hildebrandt)

A pep rally at St. Peter High School Thursday, Jan. 9 encouraged students to stay away from vaping, spurred on by Cambria’s They Lied, We Know campaign. (Photo courtesy of Kurt Hildebrandt)

While Project for Teens students didn’t expect an anti-vaping pep rally Jan. 9 to resonate with every students, they hoped it could at least get through to some. (Photo courtesy of Kurt Hildebrandt)

A video, talking about vaping impacts, was played for students at the anti-vaping pep rally, as part of Cambria’s They Lied, We Know campaign. (Photo courtesy of Kurt Hildebrandt)

In 2018-19, vaping seemed to explode in educational facilities across the country, and local schools were no exception.

The alternative to smoking, which involves inhaling vapor created by electronic cigarettes and generally includes nicotine and other chemicals, became popular among students. Although the tobacco-related product could only be purchased by adults 18 or older — until rules recently changed locally and now federally — students were getting access, and they were often found vaping in hallways, bathrooms, and even classrooms.

Policies like Tobacco 21, instituted in St. Peter in 2019 and raising the minimum age residents can purchase tobacco products, has helped to slow down the trend, school leaders say. But it’s still happening, and with reported vaping-associated deaths across the country and a general lack of knowledge on just how dangerous the product might be in the long run, teachers, administrators, parents, and even many students want to nip it in the bud.

“It was almost like I felt sorry for that person for doing it,” said St. Peter High School senior Wyatt Olson on seeing classmates vaping. “Most of us knew why (someone would be vaping), so I just felt sorry, because maybe they’re addicted or maybe they think it’s cool, so that’s where I was coming from.”

Olson is one of a number of Project for Teens (P4T) students at SPHS, who have a goal to “encourage healthy and responsible decision making by youth through peer-to-peer education.” Often, Olson noted, the group is working with middle school students on issues like bullying, body image, sex education and body image.

But Thursday, Jan. 9, the group stayed at the high school, where they held a pep rally, supported by Cambria, talking about the issue of vaping and challenging fellow high school students to think about the consequences. Olson knows their can be some disinterest and apathetic attitudes when it comes to teens at an organized rally, but he also feels taking the time to get everyone together and confront the issue can make a difference.

“We’ve talked about that before; you’re always going to deal with people like that, and your message is always going to get eye-rolled, but if you’re able to change one, two, three, four, five people’s minds, that’s a win for us,” he said.

Anne Davis is a leader of the Le Sueur-based Cambria business, along with her husband, Marty Davis, who serves as president and CEO. She was on hand for the pep rally at SPHS Thursday morning. It was the second such event Cambria has led; the first one was in Minnetonka, where the family lives.

“Marty and I have four sons, and our youngest son is a junior in high school,” she said. “We saw, from out of nowhere, this explosion where all the students and many of the population were starting to vape. We weren’t really even familiar with what vaping was, so when we educated ourselves, we just thought, ‘Oh, my God, this is terrible.’ These kids can’t be doing this.”

After doing fundraising for juvenile arthritis for about four years, the Cambria team was eyeing a new youth-centered cause in anti-bullying. But when they discovered the fast and far-reaching impact of vaping, they quickly changed course.

“What we wanted to do was have the students educated the students, and so we created an ambassador group at Minnetonka High School,” Anne Davis said. “Both Marty and I are from this area — I went to Mankato West and Marty went to St. Peter High School — so we were excited to come back home and give back. But also Project for Teens is a group here that had already started the efforts of the vaping campaign, so it was easy to come here next.”

Cambria launched They Lied We Know in Minnesota communities to “help students and parents learn about the extreme dangers of vaping and e-cigarettes.” In its campaign materials, Cambria notes that, in December, the state of Minnesota sued JUUL for targeting youth in their e-cig marketing campaigns, misleading young people in an attempt to gain a new generation of vapers while violating several consumer laws.

The pep rally was to educate students on vaping and spread awareness through school social channels, as well as offer activities to engage with a kiosk to be set up at the school for a couple months that will feature t-shirts, quizzes, stickers and brochures on myths about vaping and more.

The St. Peter School District doesn’t yet have numbers indicating progress made in reducing vaping from the 2018-19 school year to 2019-20. Anecdotally speaking, though, students and administrators feel like they’re seeing less of it.

The problem really did come to light vigorously and ferociously in 2018-19.

“Especially last year, we noticed just in explosion in students vaping — in school, all over the place — and it caught all schools by surprise,” said Principal Annette Engeldinger. “We had a couple of incidents (of vaping in classrooms), like just blatant disregard. And I don’t know if that’s a teenage thing, assuming they’re never going to get caught, same as assuming they’re not getting harmed. And it was something knew and they believed those lies out there about it.”

She does feel there has been a drop in the activity this school year. She has hopes that policies, like Tobacco 21, will make a difference, in addition to the education many schools are now providing.

“I hope that it makes a difference; I think it will, as far as high school kids are concerned,” she said. “I think this pep rally will have an impact. Those of us trying to work on this have all been grown-ups. So getting the kids involved and having a big splash will hopefully bring it to the forefront for more kids.”

School social worker Kelly Jensen agreed that there probably has been less vaping around the school this year, at least less visible to staff and other students.

“We had a real insurgence of vaping last school year,” she said. “We were catching a lot of kids. I think kids are better at hiding them. But I think the other thing that’s changed is we have other students coming in and saying, ‘I saw students in the bathroom vaping, and here’s a picture.’ And they’re doing it because they don’t want kids vaping.”

The reasons for a student vaping may vary, but Jensen sees at least one common cause, outside of just peer pressure.

“A lot of kids tell us they vape, because it calms them. It helps them with anxiety; it calms them down; it helps them go to sleep at night,” she said. “So we do a lot of teaching about relaxation, other healthy ways to calm yourself. We talk about exercise, eating healthy, making good choices for your whole life and body.”

She continued, ‘We do have a lot of kids who say, I’m not going to believe this is a problem until something happens,’ which is where they’re at developmentally. I show them statistics, facts. I tell them about people dying. And again, we educate them about way better ways to calm themselves and better things to do in groups.”

Adults speaking and lecturing only goes so far with teens, and sometimes it takes a little bit of reverse peer pressure to get kids thinking differently. Both Engeldinger and Jensen noted that the Project for Teens students are leaders in the school, and teachers and administrators hope that students like them can be the ones to get an important message through to other students.

“Maybe it won’t so much be the seniors impacted; maybe it’s the juniors or sophomores or freshmen,” Olson said. “But again, if we can get the message across to four or five people, we’ve done our job.”