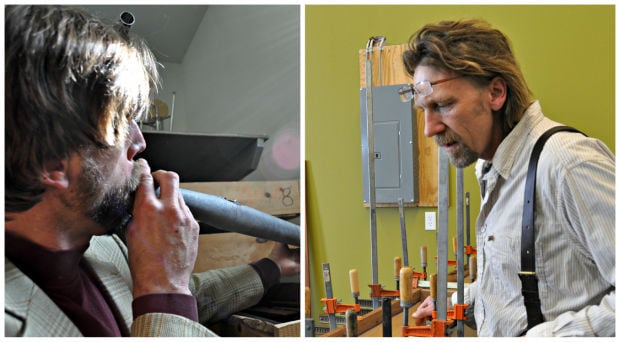 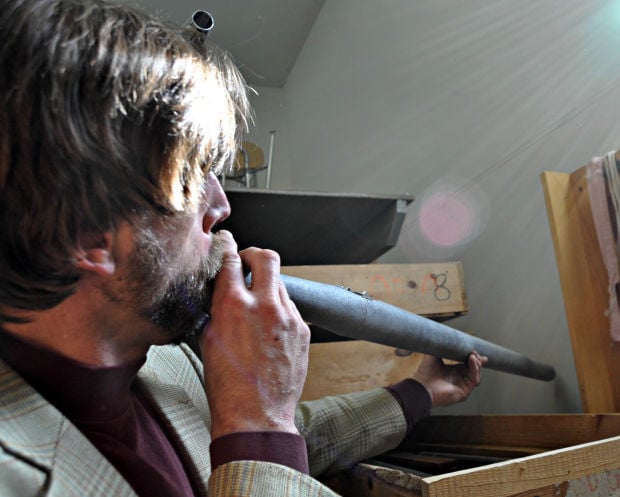 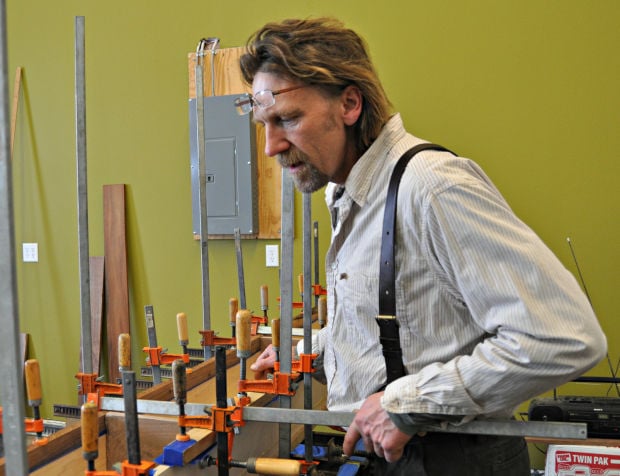 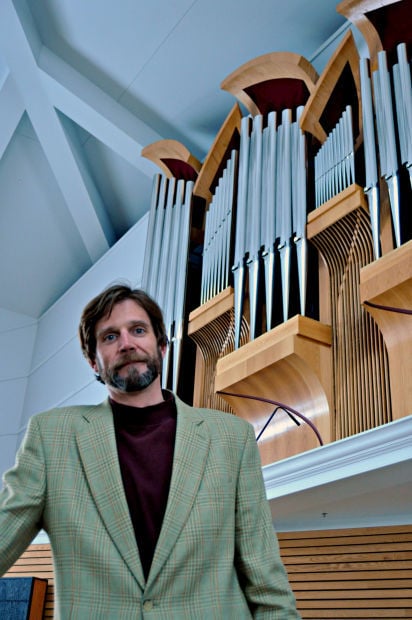 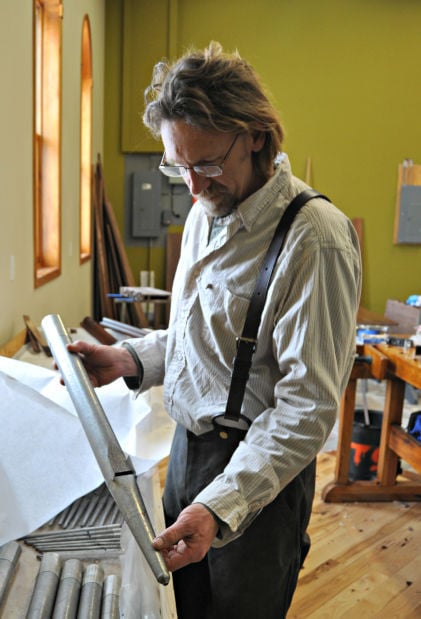 Eric Hendrickson takes an organ pipe from a long, wooden box containing several of them to be used in a new organ. (Jessica Bies/St. Peter Herald)

Eric Hendrickson takes an organ pipe from a long, wooden box containing several of them to be used in a new organ. (Jessica Bies/St. Peter Herald)

For second-generation organ builders Andreas and Eric Hendrickson, combining a love for architecture, music, art, business, woodworking and travel, has been more than just a pipe dream, it's been a career.

In recent years, his sons, Andreas and Eric Hendrikson have begun play a bigger role in the business, taking over as their father moves into retirement — Eric Hendrickson is head of installations, tuning and service and Andreas Hendrickson is in charge of design.

“They’re actually doing the work and running the factory,” their father, Charles Hendrickson, said, adding that he's been unofficially retired for about a year now.

The firm designs and builds about two or three new pipe organs a year, spending several months on each. In between jobs, it provides maintenance, tuning and restoration work.

Charles Hendrickson said his sons, both introduced to the craft as children, are pulling out all the stops, designing and building organs more intricate and modern than he ever imagined.

Each instrument is one-of-a-kind — custom made for the buyer — and takes an incredible amount of workmanship to produce.

And it's workmanship his sons have proven they're more than capable of.

"It's such a relief to have my sons take over," Charles Hendrickson said with a laugh. “They sort of grew up in the business and helped me from quite young, actually. They learned everything and were very competent. And now they're doing it all."

Andreas Hendrickson did not always want to become an organ designer, but joined the family business after he graduated from the University of Minnesota with a degree in architecture.

"I guess I just fell back into it after I left school," he said. "I didn't find a lot of intrigue in being an architect … I guess everything else, I've really just picked up over the years."

He said he's learned almost everything he knows about the craft from his father, who has designed organs for many of the area's churches, including the family's home church, First Lutheran in St. Peter.

But his architectural background kicks in often — because organs are made to fit specific spaces, they must often emulate the design of the room they are being built for and fit the space perfectly.

And because the organ is more than just the console holding the keyboard — it is the pipes, the chests in which the pipes sit, the valves that open to let air flow through the pipes and the mechanical or electric linkage that connects them all — getting all the different components to work together and fit into a pre-designated space can be a challenge.

"You have to tap into your imagination," Andreas Hendrikson said.

What a new organ ultimately looks like depends on a number of factors including the number and types of pipes included, the size of the room where the organ will be placed and also the client's budget, Andreas Hendrickson said.

Organs designed by Hendrickson Organ can be incredibly ornate, artistic and in some cases, sleek and contemporary, Andreas Hendrickson said.

"There are a lot of builders out there that rely on traditional organ designs," Hendrickson said. "But we've never been held captive by that."

An example of the firm's recent work can be seen at the Church of St. Peter — there an organ designed by Andreas Hendrickson was installed in 2001, as the new facade was being completed.

It incorporates pipes from the church's original organ, badly damaged in the 1998 St. Peter tornado, but it is also fairly modern looking, Andreas Hendrickson said.

"There was a lot of freedom artistically to get to that design," Andreas Hendrickson said. "And as far as the woodworking is concerned, it was difficult design to execute."

His father, Charles Hendrickson, called the design brilliant, saying it was a good example of how his son, in many ways, has surpassed him as an organ designer.

“Some of the things I would have never done, never envisioned, never even tried to do, he’s doing," Charles Hendrickson said. “I was always a a traditional designer. I did things in a classical manner, but he’s getting into more modern and contemporary design.”

Taking business on the road

While Andreas Hendrickson handles design, Eric Hendrickson takes care of installation, tuning and service work, often heading out on the road to do so.

"Clients call and say 'The organ's broke. Come fix it,'" Eric Hendrickson said. "Or 'It needs to be tuned.'"

Eric Hendrickson said service work often takes him to South Dakota, Wisconsin or Iowa. Many organs, he has maintained for years and visits on a regular basis.

"I get to revisit the towns I've been visiting for the last 20 years," Eric Hendrickson said. "I get to see how the towns have changed, the local cuisine. I try never to take the same way to a job and come back a different route."

"Organ building has been going on for a couple hundred years," Eric Hendrickson said. "A lot of parts wear out after 50, 60, 100 years."

Before working on an instrument, you have to get familiar with it, he said.

In addition to service work, Eric Hendrickson helps build organs from the ground up, executing his father and brother's designs.

Some of the work involves intricate wood carving or other complicated woodworking, he said. Like his brother, he has learned most of what he knows about organ building from his father and around the shop, though he also has degrees in German and earth science.

Eric Hendrickson said he knows an organ has been designed and built well if 100 years later, its pipes still stand straight.

While maintaining organs, he often finds bugs, bats and mice, but also solid woodworking. Organ making is a complex craft and the mechanics of each instrument can seem bewildering to the outsider, he said.

But once you crawl inside and look around, you can find out a lot about their designers and builders — in many ways, crawling into an organ to tune or restore it is an adventure.

"A lot of organs look a little intimidating," he said. "I guess I've got the guts to go in and look at stuff. To fix them."

HOW A PIPE ORGAN WORKS

Simply stated, the pipe organ is a big box of whistles. Each pipe sits on top of a hollow wind chest that is filled with compressed air provided by a bellows or blower.

Each ‘stop’ at the organ console represents a set of pipes (a rank) of a particular tone color, with a different pipe for every note on the keyboard. Pulling the stop activates a slider under that specific set of pipes on the windchest, making them available as a sound-source.

The wind chest also contains a series of valves (pallets) connected to the keyboard by a mechanical linkage. These pallets govern the flow of air to each pipe, and even though a stop may be on, no pipes will sound until a key is depressed and its respective pallet opens. This allows the compressed air to pass up through the pipe for that note, creating sound.