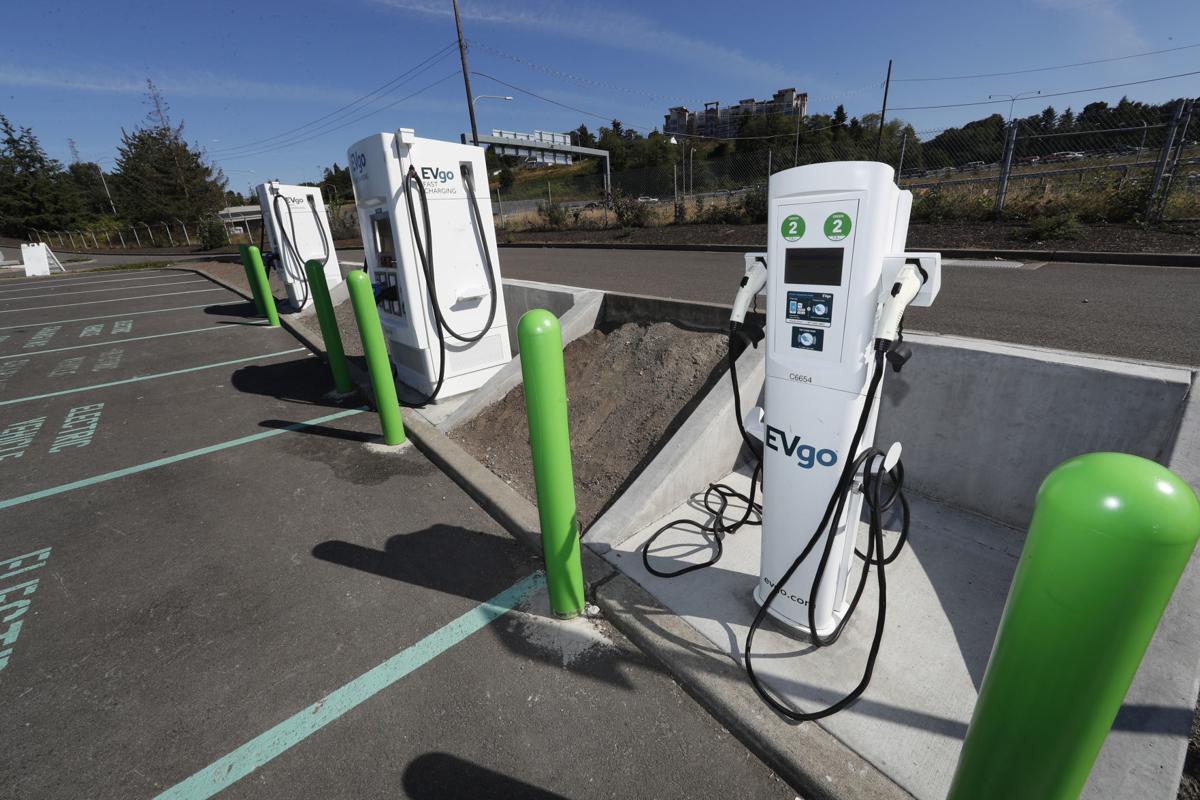 The city of St. Peter will add two electric charging stations in town, each with two parking spots. Each station will include a Level 3 fast charger and a Level 2 charger. In this Sunday, July 21, 2019 file photo, electric car charging stations stand along Interstate 5 outside the LeMay Auto Museum in Tacoma, Wash. (AP Photo/David Zalubowski, File) 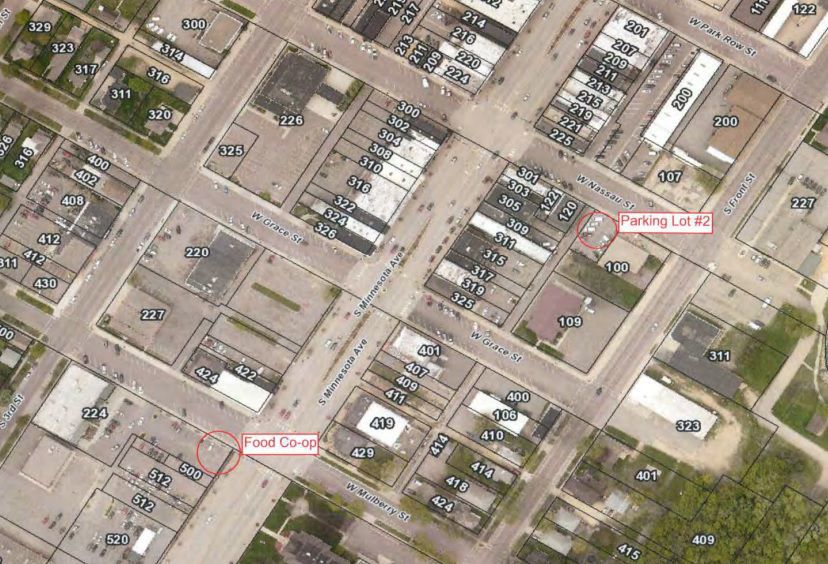 The city of St. Peter has pinpointed two locations for electric vehicle charging stations on either side of Hwy. 169 — the back of the St. Peter Food Co-op parking lot and on the south side of Nassau Street in a city-owned lot. (Graphic courtesy of city of St. Peter)

The city of St. Peter has slowly but surely been working toward the addition of electric vehicle charging stations in the city, and installation is now expected in the summer.

In August 2019, the city met with businesses and got some positive feedback on the addition of the stations. Then, with affirmation from the council, the city honed in on one location at the back of the St. Peter Food Co-op parking lot; crews went ahead and put in the necessary cable to locate a station there.

Staff got permission from the council May 11 to purchase a second charging station for about $29,200, plus the cost of installation. The first station and its eventual installation was provided by Southern Minnesota Municipal Power Agency. SMMPA is also providing annual maintenance for the stations, which is likely at a cost of a few thousand dollars per year.

The second charging station, then, needed a location, and staff informed the City Council May 18 that it was eyeing city parking lot No. 2, behind Ryan Plumbing and heating on the south side of Nassau Street. That location is on the east side of Hwy. 169, which was desirable to the city, with the first station located at the Co-op on the west side of 169.

The council provided support for the plan, though it was a work session, so no official action was taken. City Administrator Todd Prafke said no official action is needed, and staff can now proceed with the direction of the council. Staff anticipated installation within two months, but the timeline is tentative, as the stations have not yet arrived.

City staff is prepared for a learning curve when it comes to the implementation of the charging vehicles, but, with knowledge of other communities’ experiences, staff has some ideas of how the stations will work.

One station will encompass a few parking spaces, where only electric vehicles using the chargers will be permitted to park. Use of the stations will come at a fee or multiple fees, utilizing a card swipe system. The fees would be for energy use and potentially time connected. The former fee is a way to charge customers for kilowatt hours of electricity, while the latter fee is similar to a parking meter, charging for time spent in the space.

To start, there likely won’t be any rule stating how long a vehicle can stay in one of the parking spots, but the vehicles will need to be connected while in the spot. City staff is looking outward for examples on how to manage use of the spaces.

“In California, there is a kilowatt charge but also a time connected charge, where you’re paying as you are sitting there connected,” Prafke said. “The idea is that ‘No, you can’t be there without connected and charging.’”

Each station would encompass two or three parking spaces and would include at least one Level 3 fast charger and one Level 2 charger.

The starting fees have not yet been decided by the city. Public Works Director Pete Moulton previously indicated that the cost of the Level 3 fast charger is typically about 30 to 50 cents per minute, while the Level 2 charger is usually around $2 per hour. So the city stands to gain more from the fast charger, if the stations are used regularly.

It’s impossible for the city to know how often the charging stations might be used right away and how use might grow over time. Prafke, though, noted that the city does have confirmations of a number of electric vehicles in the community, based on the creation of charging stations at homes. City staff also believes that St. Peter, along Hwy. 169, is a prime location for the stations, as vehicles coming through look for a place to stop and charge.

The hope, too, is that the stations will benefit from a continued increase in electric vehicle sales nationwide and across Minnesota. There are over 6,000 electric vehicles currently in the state, and, naturally, having charging stations in the community is the best way to attract those drivers into town, leaders say. The number of electric vehicles is only expected to increase in coming years.

For now, city staff doesn’t anticipate adding any more stations. In addition to the two set to be installed by the city, charging stations are present at Gustavus Adolphus College and at Best Western. So, for now, the stations are a relatively low risk experiment for the city.

The amount of use the city will see from its charging stations is yet to be determined, and its likely to impact how much leaders choose to invest in the stations going forward. Staff feels St. Peter stands to gain in a number of ways from adding charging stations to the downtown.

“We are located on busy Highways (169, 99, and 22), and if downtown locations were chosen for a station site, it should increase the number of people visiting St. Peter,” Moulton said. “In addition, utilization of EV chargers is an excellent opportunity for our utility to increase the base load electric sales.”

Prafke mentioned that the next step for the city might be establishing a program to assist residents with setting up electric vehicle charging stations at home. That will likely be an item of discussion for the council in the future.

There are three different levels of charging stations. The least expensive are Level 1 chargers, which are typically used in residents’ homes for overnight charging. In addition, they can be plugged into a standard wall outlet. However, these chargers typically only deliver about 2-5 miles of range per hour of charging.

Level 2 charging stations can’t be plugged into a standard wall outlet, so they’re more costly to install and to maintain. These chargers typically cost about $1,000. They’re able to add about 180 miles to a car per eight-hour charge, or a little over 20 miles per hour.

Level 3 (also known as DC Fast Chargers) can charge vehicles the most quickly, adding 60-100 miles of range to a car in only 20 minutes. However, not all electric vehicles can be charged at these stations, and they require highly specialized equipment to install and maintain. They can cost around $20,000.