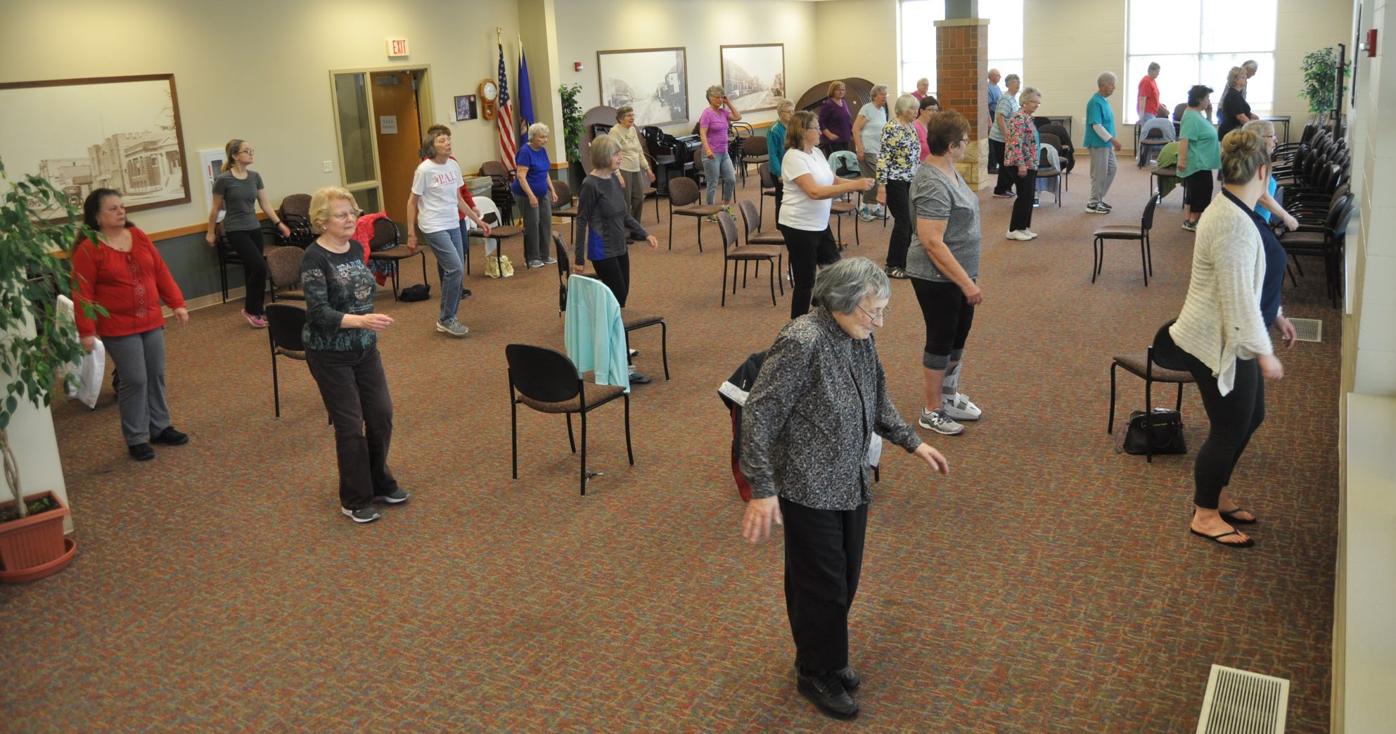 The popular Partners for Active Living exercise sessions Friday went into the St. Peter Senior Center for a day because of floor maintenance in the Community Center gymnasium. (Dana Melius/St. Peter Herald) 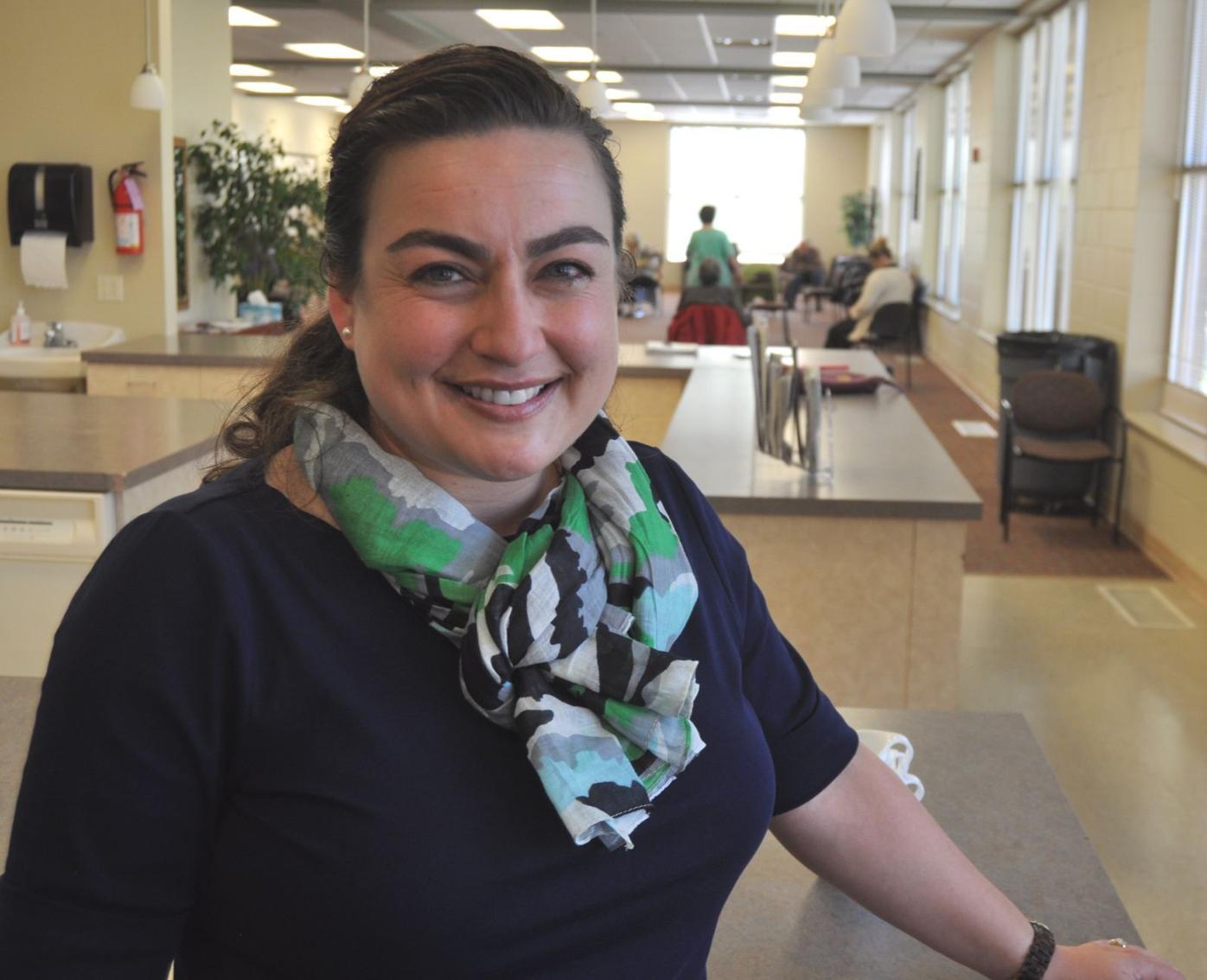 The popular Partners for Active Living exercise sessions Friday went into the St. Peter Senior Center for a day because of floor maintenance in the Community Center gymnasium. (Dana Melius/St. Peter Herald)

“I’d like to see the Senior Center better utilized,” Roemhildt said. “And part of that might be asking, ‘Who exactly is our target audience?’.”

Roemhildt’s words, however, bring a sense of caution to change, one of respect for ongoing programs. But she also notes that as a bit of an outsider, she might be able to freshen or expand the center’s programs, direction and brand.

“Change is inevitable, but you won’t see too many changes in the Senior Center any time soon,” wrote Roemhildt in a revamped “Saint Peter Senior News” May/June 2017 newsletter. “However, it is my hope to add more activities and learning programs in the coming months and years.”

Roemhildt, a California native, and husband Mark recently purchased a home Dec. 31 in St. Peter following his retirement after 25 years of service in the United States Navy. And while the couple has lived in Japan, Singapore, Italy, Hawaii and Idaho, Mark is a St. Peter area native.

“The past 17 years we’d come back every so often,” Gabriela Roemhildt said. Still, her West Coast roots and collegiate studies in Rhode Island, where she met her husband, created an urban mindset and lifestyle that at times seemed much different than the more small-town atmosphere of St. Peter.

But those different perspectives, plus a growing love for the St. Peter community, now provide a fresh look for a Senior Center looking for new direction and purpose.

“St. Peter has a lot going for it and sometimes it takes an outsider to appreciate it,” Roemhildt said.

While the St. Peter City Council and the city’s Recreation and Leisure Services Department have been considering a name change for the Senior Center in an effort to attract more diverse demographics, there has been not yet been a decision, Roemhildt said. But she understands the possible name change, for the local center has traditionally attracted what she calls the “Super Seniors,” those 65 and older.

“We have to find a name that better fits the center and the needs of the community,” Roemhildt said. Too often the term “senior citizen” stereotypes an older audience. Today’s citizens might be retiring at age 55, for instance, the AARP target audience.

The local P.A.L.S. exercise program – Partners in Active Living for Seniors – is such an example. It’s extremely popular, and while beginning to draw many participants under 65, they’re often 70 and older, Roemhildt said. That, too, is OK, she stressed.

“This is a very popular exercise class,” Roemhildt said. “They’ve become quite a tight group. They all look out for each other.”

Friday’s exercise leader, Donna Haala, was symbolic of that chemistry, encouraging participants, teasing a photographer to join, and constantly moving. She expressed excitement about the center’s growth.

It’s a camaraderie Roemhildt would like to bring to other activities and learning programs, she said. But it’s likely going to take time, she added. Friday’s opening chess and checkers, scheduled for the first and third Fridays from 10 a.m. to noon didn’t attract any players on its first day.

Roemhildt has a master’s of library and information science degree from the University of Wisconsin, Milwaukee. And while the senior center job is currently part-time, she’s hoping expanded programming and fundraising could lead to a full-time gig and more activities.

“There’s so many possibilities,” said Roemhildt, who will bring particular attention to lifelong learning programs. “We’re always learning. We’re always growing. And seniors are trying to find a purpose to what retirement is.”