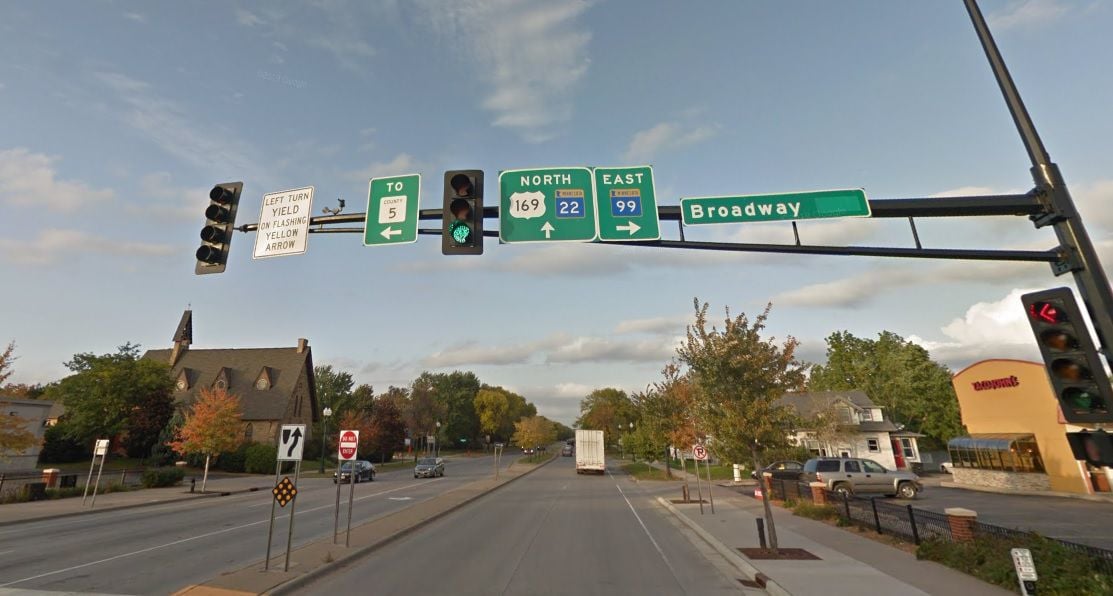 Hwy. 169, north of Broadway, is expected to undergo construction in 2022. (Google Maps image)

After taking feedback in October, MnDOT is eyeing a concept for Hwy. 169 improvements in north St. Peter that includes a new median, new left turn lanes and new crosswalks along the stretch. (Graphic courtesy of MnDOT)

In seeking local feedback, the Minnesota Department of Transportation presented three concepts in October for an expected 2020 construction project on Hwy. 169 from Broadway Avenue to Union Street in St. Peter. One of those options included nothing but updated pavement, while another option involved a plethora of traffic calming and aesthetic changes to go with the road improvement.

As it stands now, MnDOT is eyeing something in between, though closer to the latter.

MnDOT officials and the city of St. Peter have indicated they positively view the structural and aesthetic changes on the southern portion of 169 in town. In 2022, the department aims to improve the highway from Broadway Avenue to Union Street.

Concepts shared at an open house at the St. Peter Community Center Thursday, Oct. 17, indicated that some of the traffic calming and visual features, used now on much of 169 in town, could be added to the northern section. MnDOT Project Manager Matt Young explained three concepts the state department was considering at the time.

“We have to do something with the pavement,” said Young. “So since we’re going in to take care of that, we’re also exploring other opportunities with the city. The city has reached out to MnDOT and identified liking the aesthetics, liking the feel of the southern part of town, so they’re looking to see that extended. MnDOT is supportive as well, because it is safer.”

After receiving feedback, Young visited the St. Peter City Council during its Nov. 18 goal session at the Community Center. While nothing has been finalized to this point, Young said the current preferred concept includes a new 16-foot median in the road with vegetation, plus new turn lanes at two intersections and new crosswalks in a couple places.

The concept would also see the road widened by 1 foot on each side.

It reduces the changes a bit from the most aggressive concept presented in October, which included an 18-foot median, a “¾ intersection design” at Ramsey Street (which would’ve prevented left turns from Ramsey onto 169), and a widening of the road by 2 feet on each side.

Young said that the feedback given at the Oct. 17 open house (and elsewhere) indicated that the 18-foot median concept was not popular.

He said a lot of the people who preferred the “pavement improvement only” option were residents along the route concerned with a median preventing them from turning left onto 169. He further noted that businesses, while not approving of the 18-foot median concept, did seem OK with a concept that called for a 14-foot median.

Wanting to take in the feedback from both the city and residents, while considering its own opinion, MnDOT “came up with more of a compromise,” Young said. However, the MnDOT representative warned that a lot can still change from here, and much of it depends on funding, which has not yet been secured for the project.

“It could go all the way back to just a pavement replacing; we don’t have funding yet,” Young said. “There are a lot of pavement needs in our district.”

But as it currently stands, MnDOT’s preferred concept would change the stretch of road significantly, mirroring the changes that occurred on the southern end of town. The median would create separation between the northbound and southbound lanes and prevent left turns from adjacent properties into either lane. It would add left turns for drivers going north or south at Skaro and Ramsey streets. It would add crosswalks at each of the intersections along the stretch. And it would add trees and other vegetation, which MnDOT says helps to calm traffic speeds.

At the council goal session Nov. 18, St. Peter Mayor Chuck Zieman indicated he’d like to see a further safety measure at Ramsey Street, adding a stoplight there, due to the high volume of traffic that might be coming out and heading north in that area. Young said that MnDOT is not considering that option.

“We still don’t want to have traffic lights. That’s long-term maintenance,” Young said. He again noted that the department is planning to skip the ¾ intersection at Ramsey, due to negative feedback, but that is something that could still be added in the future.

St. Peter City Administrator Todd Prafke noted that if the current preferred concept from MnDOT moved ahead, the city would incur additional costs from moving the curb line. While MnDOT would be paying for the bulk of the improvements, the city would be on the hook for certain expenses, like moving sewer lines.

Young expects to hear back on project funding before the end of the year.