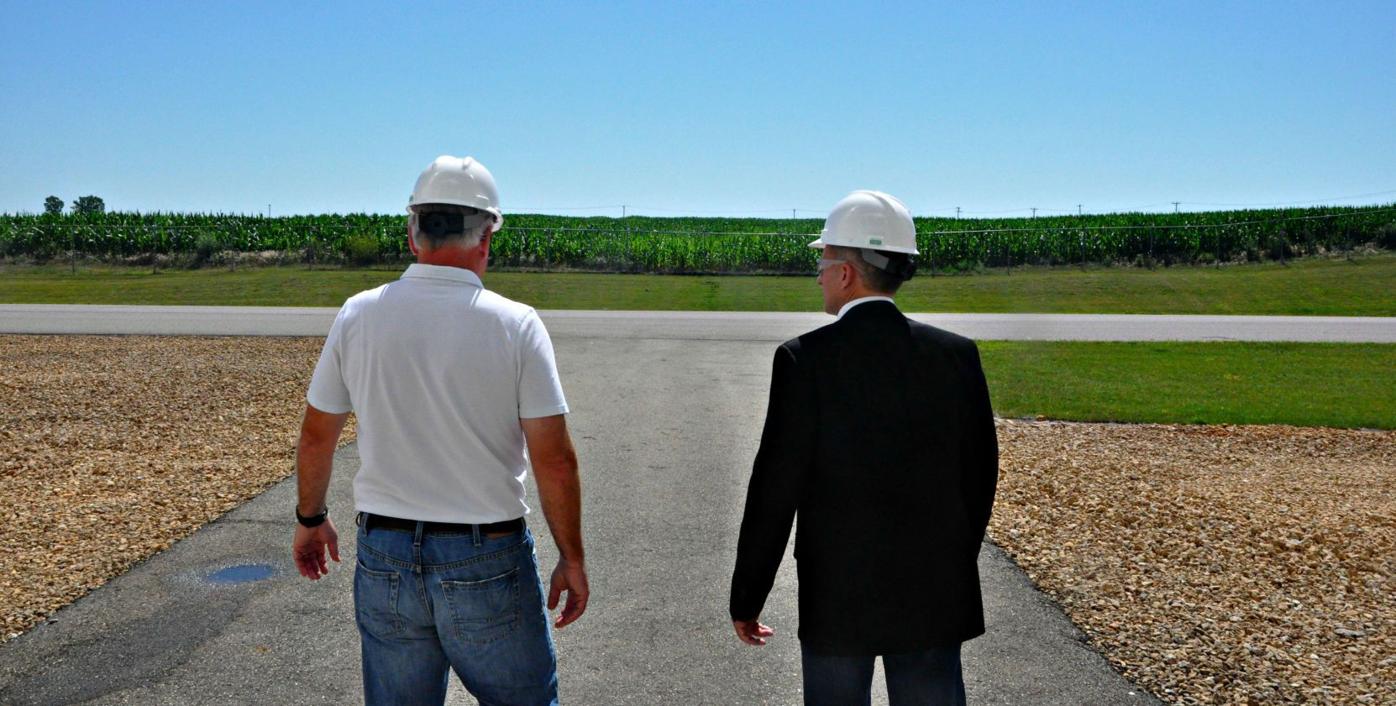 Then Congressman Rep. Tim Walz and Guardian Energy CEO Mike Jerke take a look at the cornfields surrounding the Guardian Energy plant in Janesville in July 2015. Now Minnesota’s governor, Walz appointed a council that’s calling for policy shifts that would keep the state a nationwide leader in biofuels. (File photo/southernminn.com) 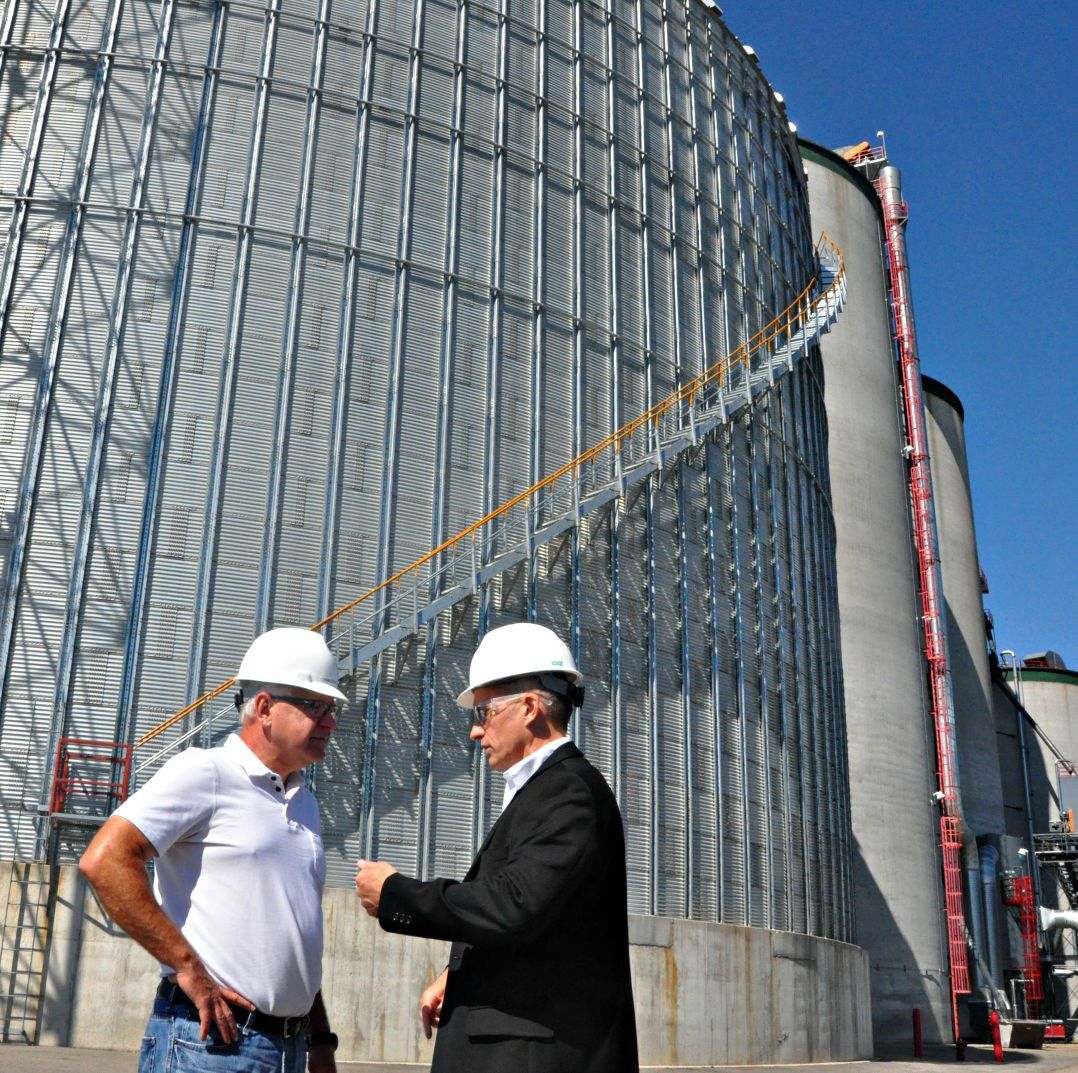 then U.S. Rep. Tim Walz, left, and Mike Jerke, right, discus the operations of the Guardian Energy plant in Janesville in a July 2015 visit. (File photo/southernminn.com)

Then Congressman Rep. Tim Walz and Guardian Energy CEO Mike Jerke take a look at the cornfields surrounding the Guardian Energy plant in Janesville in July 2015. Now Minnesota’s governor, Walz appointed a council that’s calling for policy shifts that would keep the state a nationwide leader in biofuels. (File photo/southernminn.com)

then U.S. Rep. Tim Walz, left, and Mike Jerke, right, discus the operations of the Guardian Energy plant in Janesville in a July 2015 visit. (File photo/southernminn.com)

A newly released report from Gov. Tim Walz’s Council on Biofuels is calling for state leaders to embrace policy shifts that would keep Minnesota a nationwide leader in biofuels.

In the last few years, increased ethanol consumption has been a boon for Minnesota's rural economy. According to the MCGA, the state’s ethanol industry currently supports more than 20,000 full-time jobs and generates more than $1.7 billion in income annually. Many area farmers sell part of their corn stock each year to the Al-Corn Clean Fuel plant in Claremont or Guardian Energy in Janesville. Both plants are particularly large, with the capacity to produce more than 100 million gallons of ethanol each year.

The ethanol industry was battered earlier this year by low oil prices amid the global pandemic, coupled with an oil price war between Russia and Saudi Arabia. For a period of time, the Janesville plant shut down altogether, while Al-Corn operated at a fraction of its capacity. That set the stage for a stunning rebound, with prices hitting record highs mere months after reaching record lows. Al-Corn CEO Randall Doyal expressed hope that if legislators take the Council's recommendations seriously and work towards implementing, the market for ethanol could continue to improve.

"I’m hoping they listen to the recommendations, consider them thoughtfully and see what they can get done," he said. "I'd like to see us set the standard for the nation."

Last year, Walz charged a 15-member group of biofuel and ag experts across the state with developing the report as a way to provide a roadmap for state policy. As congressman for the largely rural 1st Congressional District and now as governor, Walz has long championed biofuels.

“I am a longtime supporter of biofuels because they are good for both our environment and our economy,” Walz said in a prepared statement. “A strong biofuels industry in Minnesota not only provides good-paying jobs and helps our economy grow, but it also aids in reducing harmful greenhouse gases.”

The governor’s report calls for Minnesota to become the first state in the nation to embrace E-15 as the state standard. A bill to do just that was introduced in the legislature earlier this year and enjoyed bipartisan support, but did not pass.

"(E-15) is good for the environment, and from a farmers perspective it enhances our (market) options and supports prices," said Rice County Farmers Union President Steven Read. "It’s a win-win."

Thanks to lobbying from the state’s large agriculture industry, Minnesota has long been a leader in biofuels. Supporters of E-15 argue it’s a continuation of the state’s effort to promote E-10 fuels, which also led the nation when it was first implemented but is now the national standard.

E-15 has been commonly sold at Minnesota gas stations since 2018, when the Environmental Protection Agency repealed a regulation that barred the fuel from being sold during the summer months due to concerns about smog.

Since the repeal, the amount of E-15 gasoline sold has skyrocketed, nowhere more than in Minnesota. According to the MCGA, 350 gas stations around the state carry the product and last year Minnesota drivers pumped more than 70 million gallons of it.

“Ag is particularly interested in a higher ethanol blend, but it also offers benefits to the consumer and environment,” he said.

According to an analysis from the United States Department of Agriculture, greenhouse gas emissions for corn-based ethanol are about 40% lower than for traditional gasoline. However, environmentalists have raised concerns that ethanol can increase air pollution and smog.

Adopting a low carbon fuel standard is also listed as a major priority. That would establish a working group to prioritize reducing emissions within the transportation sector, which have remained stubbornly high even as other sectors have reduced emissions.

“Done correctly, (the standard) would give credit where credit is due to a product like ethanol that does hold those properties,” Thalmann said.

Minnesota Department of Agriculture Deputy Commissioner Andrea Vaubel said that the standard would benefit the ethanol market substantially and immediately, because nearly all new vehicles are equipped to handle at least E-15.

Developing advanced biofuels that are powerful and cleaner than today’s ethanol is also listed as a priority in the report. It particularly highlights the potential to use woody feedstocks as biofuels, improving forest health in addition to cleaner burning fuel.

Finally, the state pledges to join with other institutions to market biofuel use, including the Renewable Fuels Association and Industry groups. The report also calls on the state to “walk the walk” by purchasing more vehicles that can run on E-85.

Rep. Todd Lippert, DFL-Northfield, whose district includes part of Le Sueur County, said he had reviewed the report and is eager to work on implementing its recommendations. He expressed particular support for the low carbon standard, which could incentivize farmers to implement best conservation practices.

A member of the House’s Climate Action Caucus, is one of just a handful of DFL legislators remaining in rural Minnesota. He said that he’s optimistic that biofuels can win support from both DFLers and Republicans, if for different reasons.

“When it comes to policy, this is a place we can work together as Republicans and Democrats,” he said. “Republicans see it as important to ag, while Democrats see it as an important bridge to the electrification of the transportation system.”

;A strong biofuels industry in Minnesota not only provides good-paying jobs and helps our economy grow, but it also aids in reducing harmful greenhouse gases.'