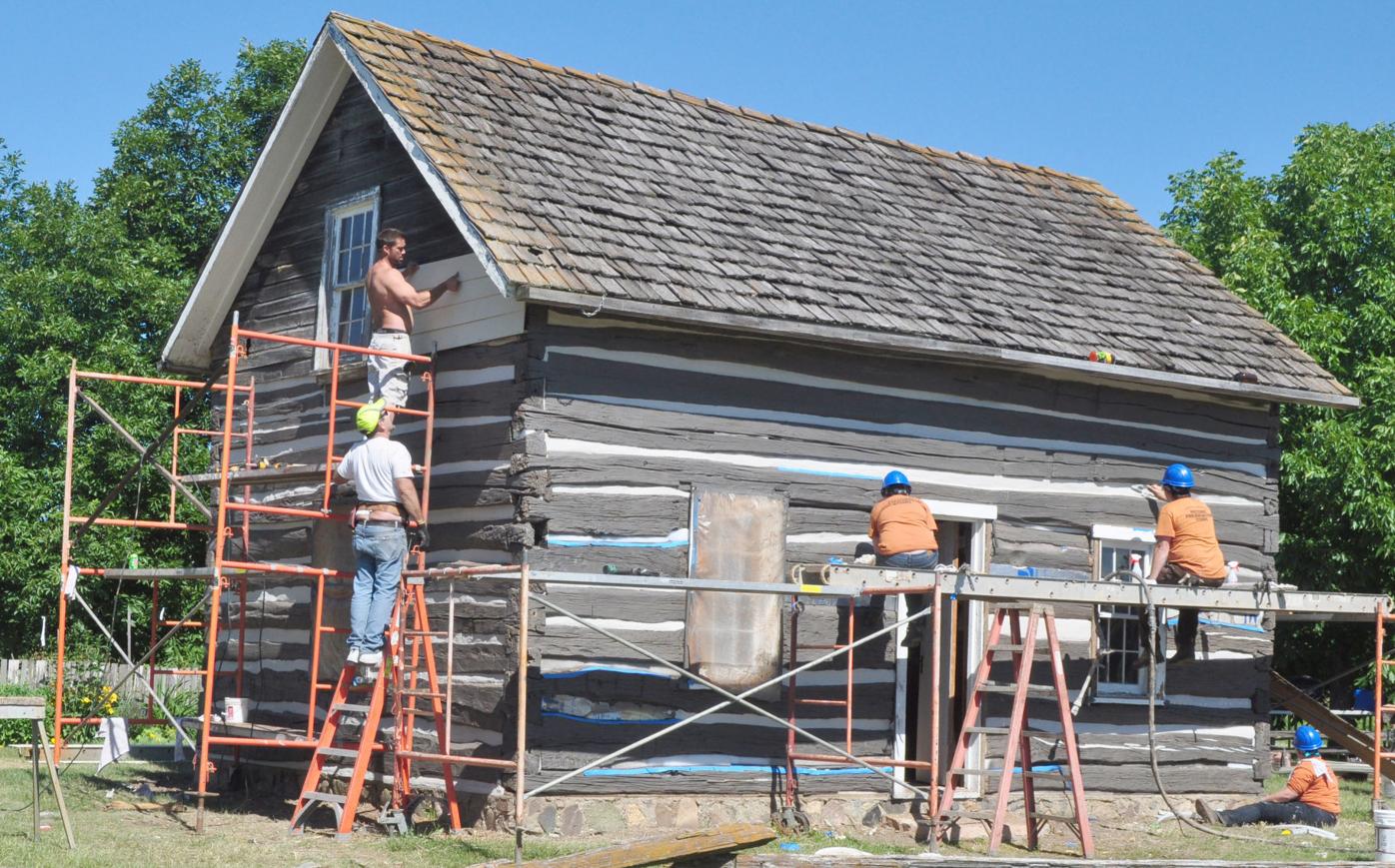 The restoration of the Borgeson cabin at Gustavus Adolphus College included replacing the chinking and siding. (Photos by Nancy Madsen/St. Peter Herald) 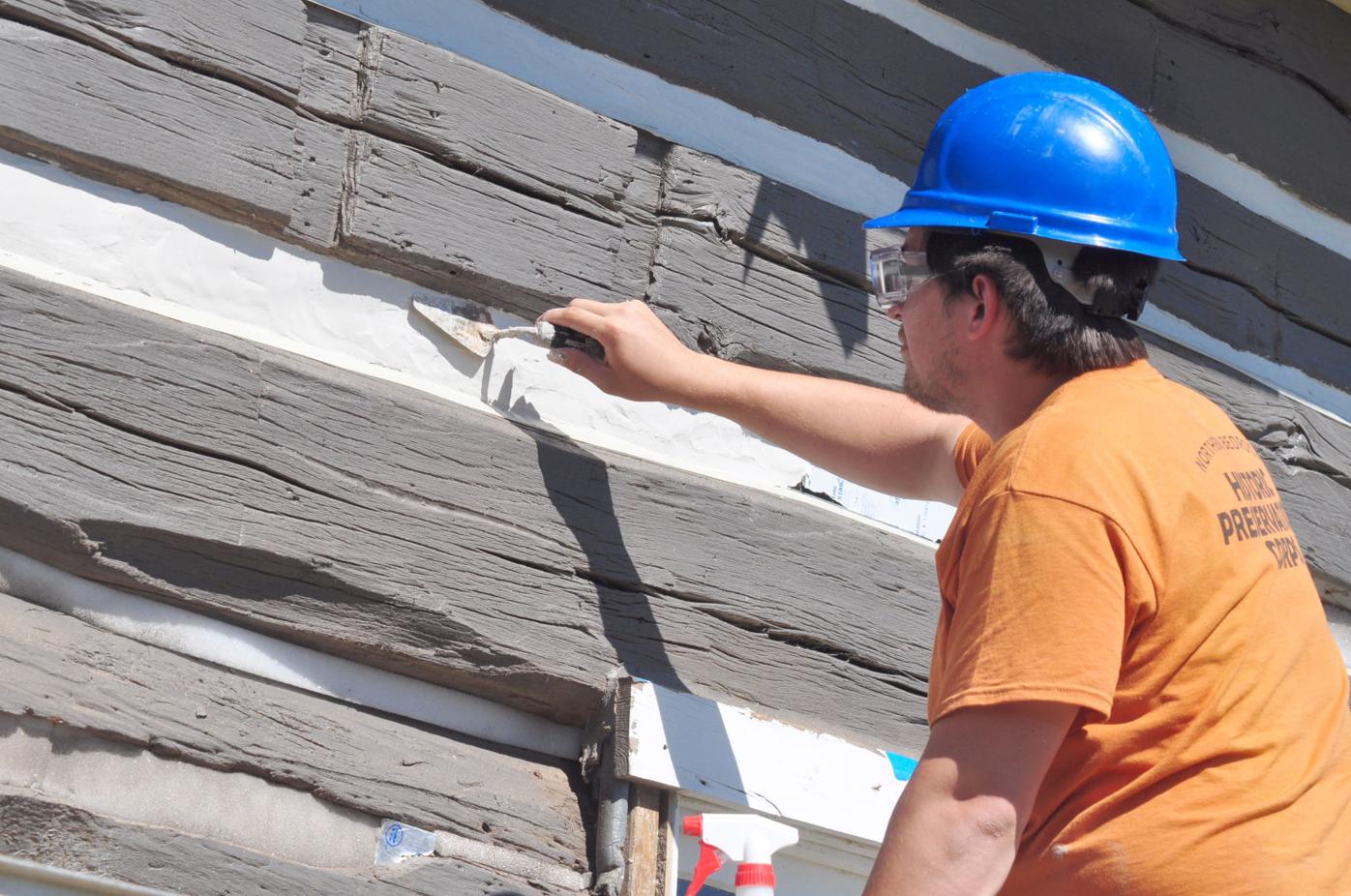 John Jesperson from the Northern Bedrock Historic Preservation Corps spreads acrylic caulk as the new chinking on the Borgeson cabin at the Linnaeus Arboretum as part of a recent restoration of the cabin. (Nancy Madsen/St. Peter Herald) 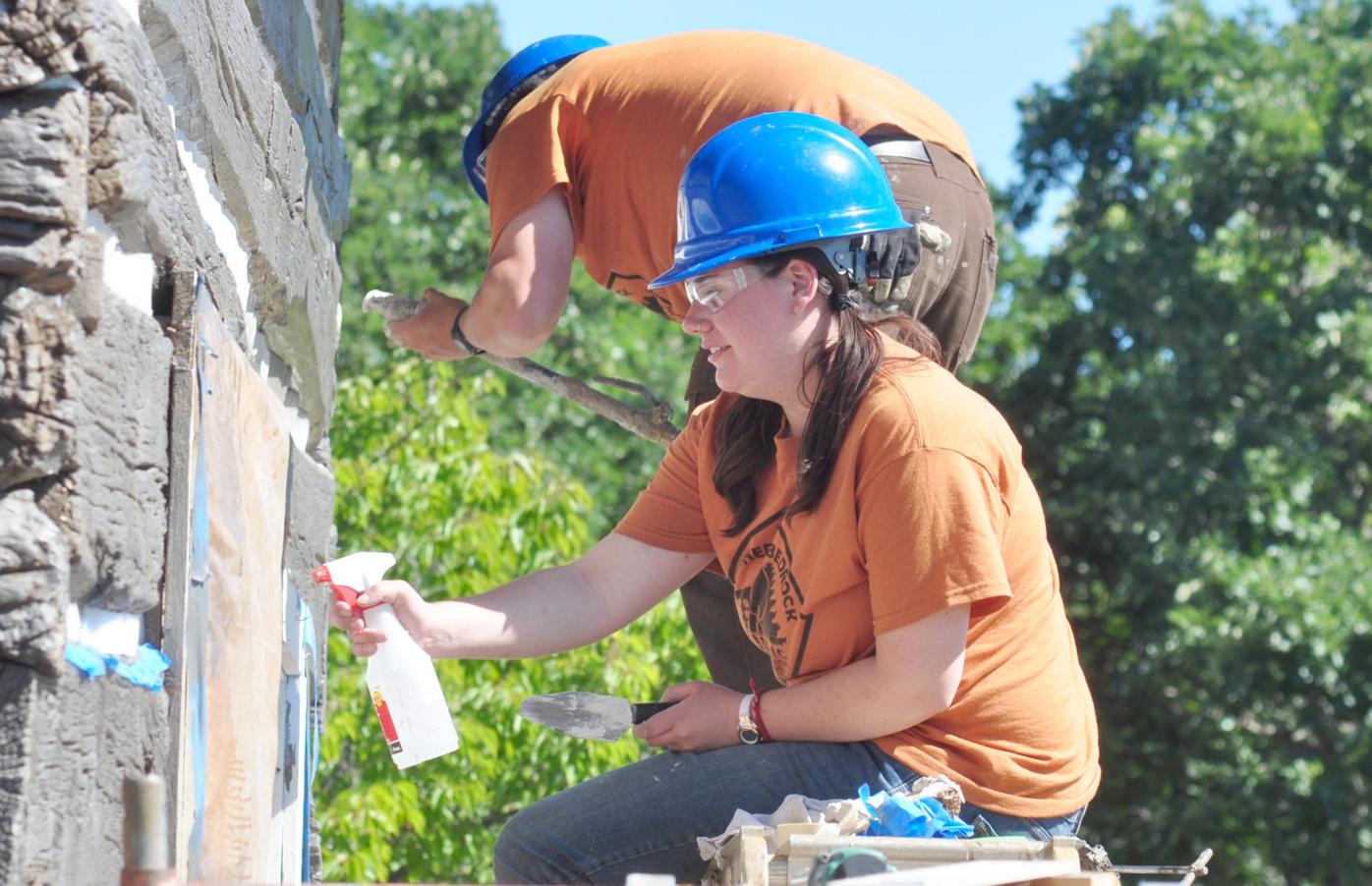 Colby Baker-Thayer from the Northern Bedrock Historic Preservation Corps, sprays the caulk before spreading it with a trowel.

The restoration of the Borgeson cabin at Gustavus Adolphus College included replacing the chinking and siding. (Photos by Nancy Madsen/St. Peter Herald)

John Jesperson from the Northern Bedrock Historic Preservation Corps spreads acrylic caulk as the new chinking on the Borgeson cabin at the Linnaeus Arboretum as part of a recent restoration of the cabin. (Nancy Madsen/St. Peter Herald)

Colby Baker-Thayer from the Northern Bedrock Historic Preservation Corps, sprays the caulk before spreading it with a trowel.

One of the highlights of the Linnaeus Arboretum at Gustavus Adolphus College recently got a facelift.

The historic Borgeson cabin, built near Norseland in 1866 and moved to the campus in 1986, was restored over eight days in June.

The preservation started with pressure washing, which was done a few weeks before the crew arrived. During the project, the chinking and a few logs were replaced, floor fasteners were added and wooden siding at the peak was taken off.

Mark Johnson, owner of Artisan Restoration in Kasota, began working with the college on a restoration plan a few years ago. Johnson’s work includes restoring and moving cabins of various ages. June’s project was a starting point for the Borgeson cabin, but it won’t be the end.

“It should be inspected almost yearly,” Johnson said. “Things have a way of snowballing. It’s the same thing that happens with your home.”

The log cabin’s needs are mainly a product of water damage. Johnson said the cabin was built with oak logs, which are more water resistant than pine. But the logs still act as they would in nature, absorbing water, which leads to rotting. And it’s not just the logs that are damaged. The vertical cracks draw the water into the logs and then into the cabin.

“When the chinking fails, it funnels water into the building instead of keeping it out,” he said.

The logs were first covered with two coats of a waterproofing base, then the gaps filled with a new chinking material and a clear waterproofing coat added on top.

When Carl and Carla Borgeson and family built the cabin, they likely used a daubing mixture that included mud, corncobs and prairie grass. That would dry up and fall out during the summer months.

“When it was wet, it could seal up pretty well,” Johnson said.

Later that was changed to a lime cement. The restoration crews now use an acrylic caulking mixed with sand, which provides texture.

“It appears more like what they used to use,” Johnson said. After it’s piped on, the workers use trowels to spread it. Like the sand, trowel marks give the chinking an authentic appearance.

To help the health of the logs, the crew drilled into them, put rods of insecticide and fungicide in the holes and capped them.

“When the moisture reaches 20 to 25 percent, it starts dissolving,” Johnson said, protecting the logs from pests and fungi.

The siding above the logs has been invaded by squirrels. The crew, guided by a local contractor, replaced it with a fiber cement siding in the hopes that it will deter the rodents.

The roof, Johnson said, is in pretty good shape.

“These are the same shingles as when the tornado went through,” he said.

The entire roof was pushed off the cabin in one piece during the tornado. The entire structure was lifted back onto the cabin.

Six people from Northern Bedrock Historic Preservation Corps, based in Duluth, helped on the project.

“On an individual and group level, we take the skills to future projects,” crew leader Cal Umlauf said. “By the end of the season, we will have the experience necessary to do work on our own.”

The crew works in eight-day stints on projects for six months, gaining experience and training from specialists, such as Johnson. The corps members are 18-25 years old and part of AmeriCorps, receiving a stipend and educational award. For this crew, it was the second project of the summer. The first one was a cemetery and monument project.

“It’s really cool to work on something like this,” Umlauf said. “We can see progress every day and by the end, we’ve done something really incredible.”