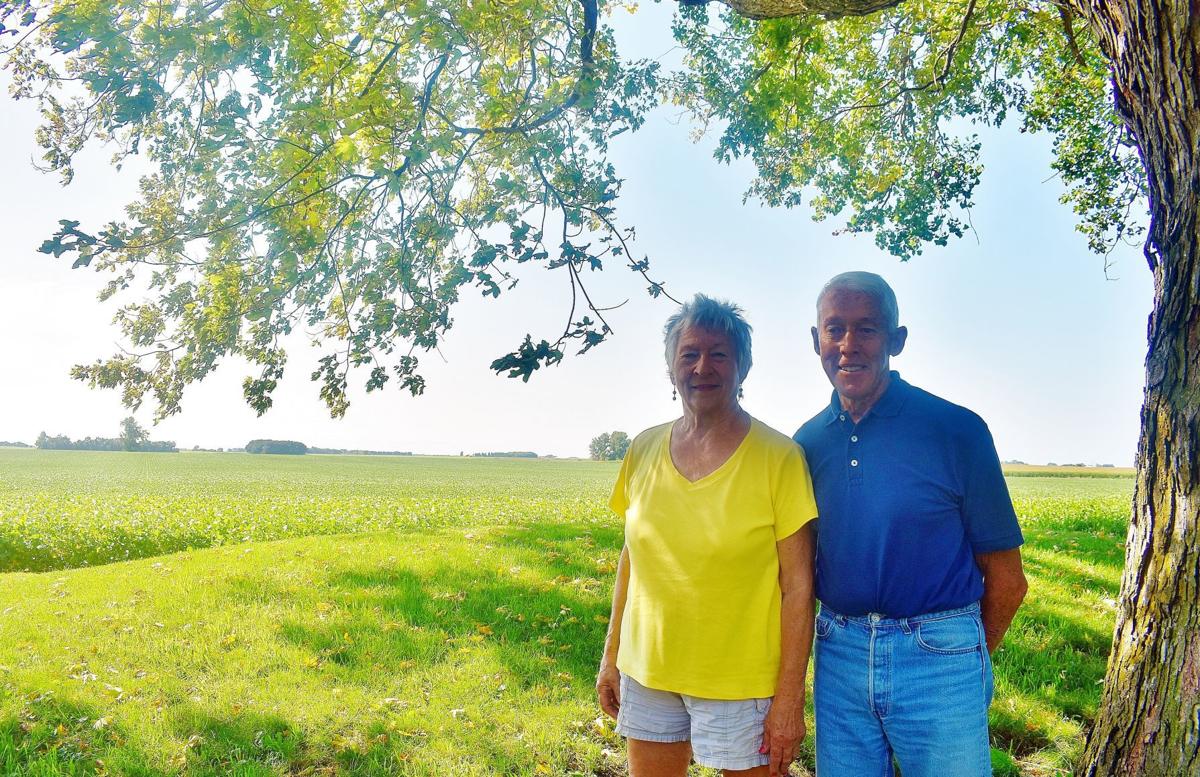 Karen and Willis Anthony run a farm outside St. Peter that has belonged to Willis' family for several generations, starting in the 1800s. (Philip Weyhe/St. Peter Herald) 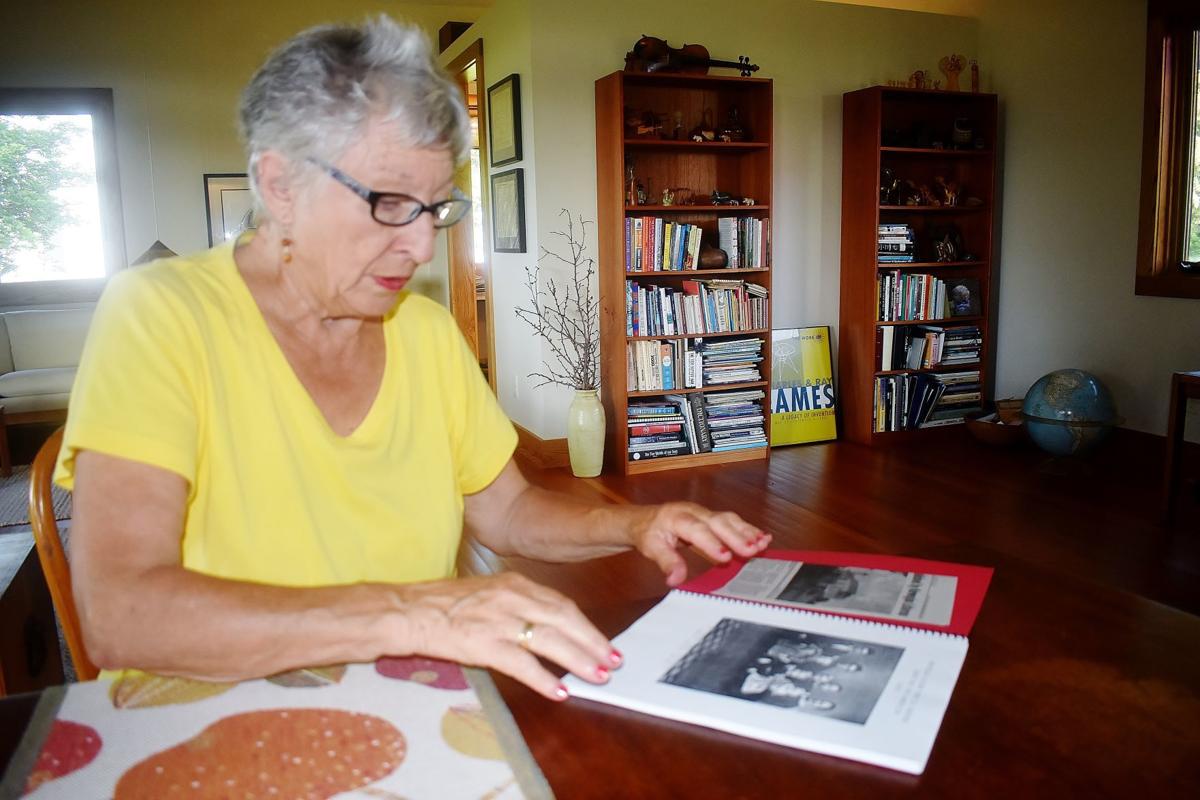 Karen Anthony looks through a photo book of the Olsen/Anthony family, which has owned the same farm outside St. Peter for generations. (Philip Weyhe/St. Peter Herald) 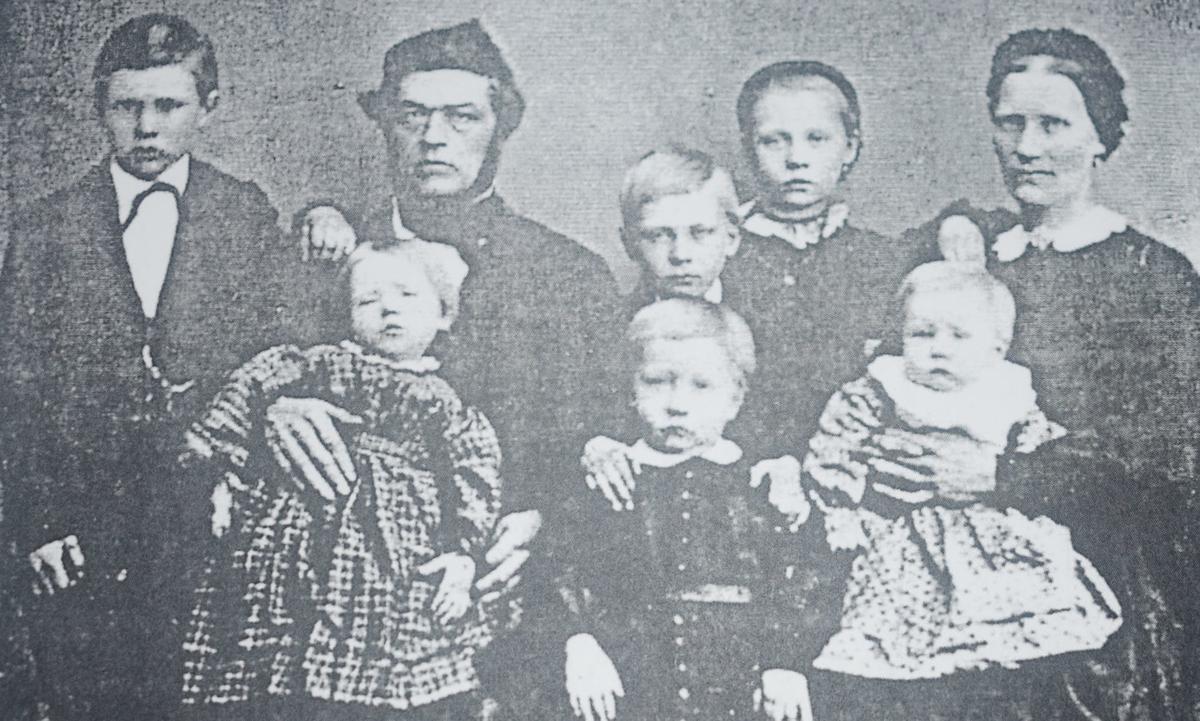 The Olsen family had six kids and another on the way when they made the journey to the United States. (Photo courtesy of the Anthony family) 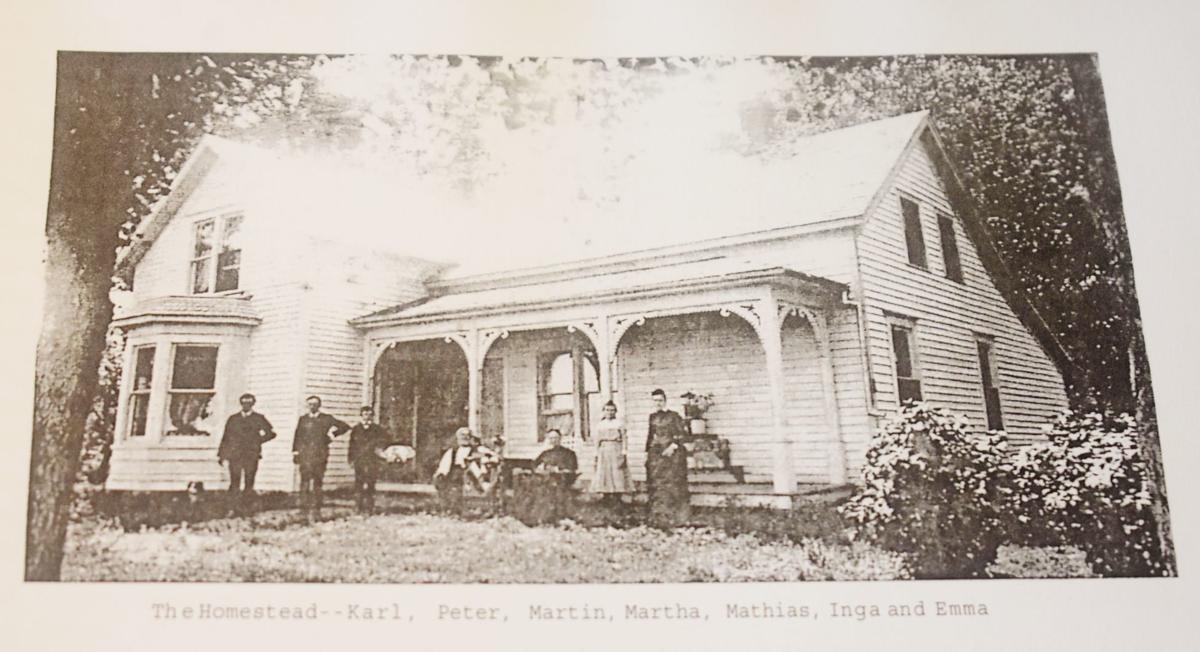 The Olsen family farmhouse built on the homestead in the 19th century still stands today. (Photo courtesy of the Anthony family) 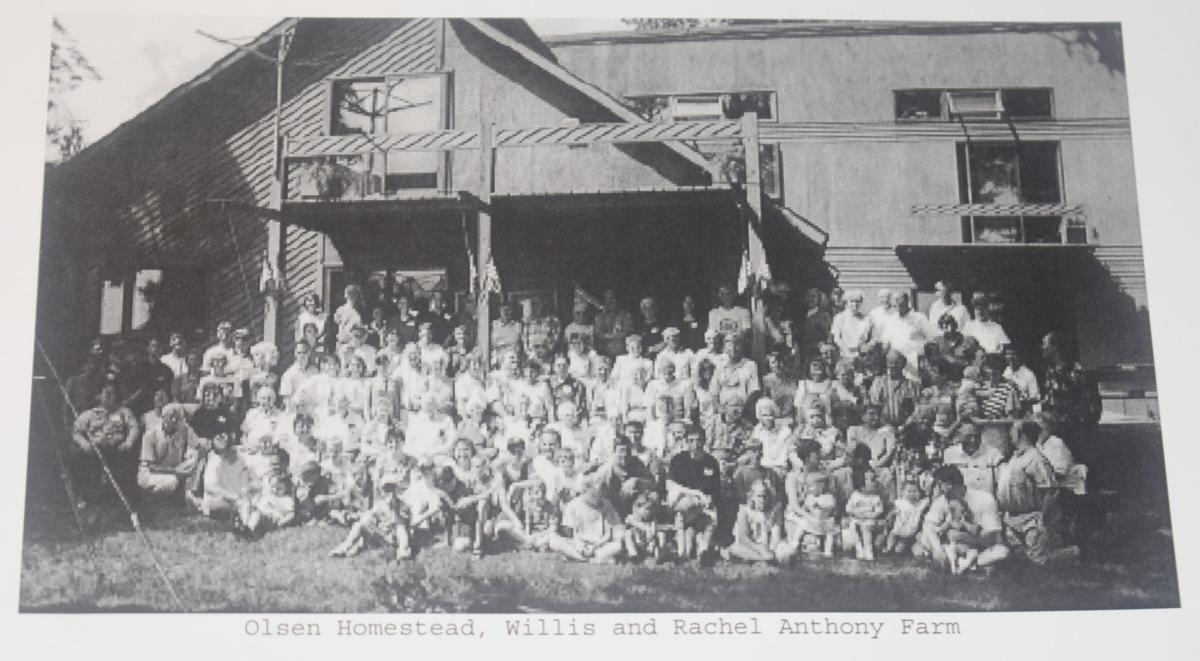 The Olsen family held a family reunion in the second half of the 1900s, a tradition that has continued periodically on the farm site. (Photo courtesy of the Anthony family) 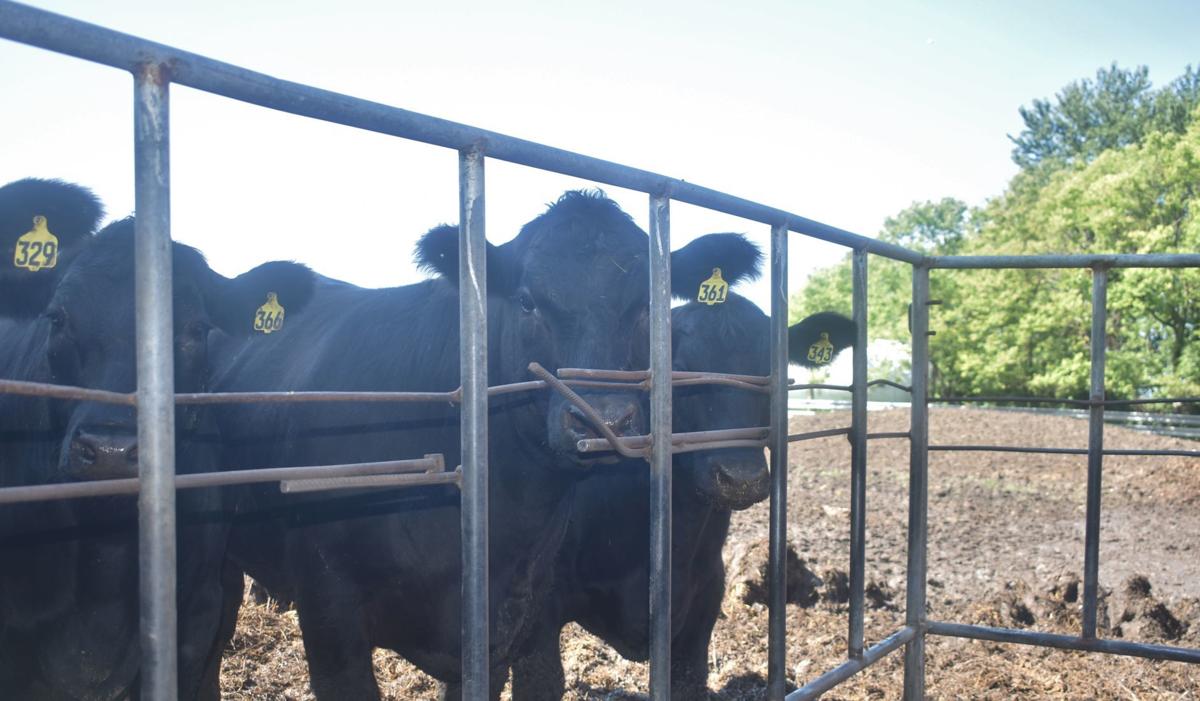 The Anthonys keep cattle on the farms, in part, to ensure their grandchildren understand the value of responsibility. (Philip Weyhe/St. Peter Herald)

Karen and Willis Anthony run a farm outside St. Peter that has belonged to Willis' family for several generations, starting in the 1800s. (Philip Weyhe/St. Peter Herald)

Karen Anthony looks through a photo book of the Olsen/Anthony family, which has owned the same farm outside St. Peter for generations. (Philip Weyhe/St. Peter Herald)

The Olsen family had six kids and another on the way when they made the journey to the United States. (Photo courtesy of the Anthony family)

The Olsen family farmhouse built on the homestead in the 19th century still stands today. (Photo courtesy of the Anthony family)

The Olsen family held a family reunion in the second half of the 1900s, a tradition that has continued periodically on the farm site. (Photo courtesy of the Anthony family)

The Anthonys keep cattle on the farms, in part, to ensure their grandchildren understand the value of responsibility. (Philip Weyhe/St. Peter Herald)

More than 150 years ago, a pregnant woman and her husband did something that probably wouldn't be advised under the best of conditions today.

They took their six children and boarded a boat to ride across the Atlantic Ocean from Europe to the United States. It was hardly a vacation cruise, but the family made it over, eventually traveling along the St. Lawrence River and through the Great Lakes. After all that, there were still paddle boats, train rides and horse and wagon lifts to come.

"We know they came and we know they got here," said Willis Anthony, a descendant of the Norwegian Olsen family that made the trip. "We continue to be pestered by the two questions: why did they leave? And why did they come here?"

'Here' being just outside St. Peter, Minnesota, where the family eventually started a farm. That same farm the Olsens settled years ago has remained in the family for generations. It switched over to another last name, Anthony, when one of the female descendants took over with her husband.

While great change has occurred on the farm, some things will always be the same.

"I would say that work is a way of life," said Rachel of lessons on the farm. "It's not something you do for eight hours and then come home to relax and recreate. And there is a lot of responsibility that comes with living on a farm that gets passed down — whether it’s to the land or the livestock."

Olsen and Anthony family members have put great work into charting the family's history, all the way back to when the first Olsen family made its way to America in the early 1860s. It's not completely clear why the family left, but there are some general ideas.

"Conditions were difficult in Norway," Rachel said. "Farms were divided among many children and divided again and again until families lived on tiny plots. There was also apparently some fear that the young people moving to the city would suffer degeneration of morals."

Willis added, "The other part is that the promoters of immigration in Norway and land agents in the US were producing some materials with significant hyperbole about (America) being the Garden of Eden with huge opportunities and wonderful soil."

So there may have been a number of reasons why the family traveled across the ocean, but why they came to St. Peter, "We don't know," Willis said.

Regardless, they got there. And they got there right when the Norwegian population in Minnesota was starting to grow. According to Olsen/Anthony family research, in 1850 there were 12 Scandinavians in the whole state Minnesota. By 1860, there were 240 Norwegians in Nicollet County alone. And by 1870, there were over 1,000.

After the family arrived, they lived in St. Peter from 1865-1869, as the father worked for Kline, making caskets and other funeral home supplies. In 1869, they found land in Prairie Township in Nicollet County. The home they built there still stands today.

"All we have in the abstract is the name, but my understanding of history is that there were government grants awarded for a variety of reasons — some who might have been in military and some for other reasons," Willis said of the Olsen family's original purchase. "I think it was pretty common for people who had those awards to resell it and get the cash, rather than occupying."

Staying in the family

Mathias and Martha Olsen were the patriarch and matriarch who made the journey all those years ago; they are the great grandparents to Willis. The son Martha was pregnant with during the journey was Peter Olsen. That is Willis' grandfather.

Peter had Marian, who married George Anthony, and had three kids of their own: Willis, his sister Lois (Annexstad) and his brother Harold. For many years, Harold, the eldest brother, was set to take over the farm.

"It was probably assumed I would do something else, so I went to college, which was a pathway to something else, I suppose, and what that was, I have no idea," Willis said. "I got my PhD at (the University of Minnesota) and was working there, first teaching and then in Extension."

Willis was still working within the agricultural field and still had ties to the farm, even if he wasn't planning to take over. He was born and raised there, after all. He remembers enjoying the farm work that came with his childhood.

"The first jobs were carrying in wood for the cook stove and then feeding pigs," he said. "My father always had a few cows that were milked, so I did that, too. As I got older, I worked in the field with a little tractor doing tillage. As I grew older, it was cultivating corn with the two-row tractor and feeding the cattle."

After moving away from home, he met Rachel and the two married in 1966. Rachel also grew up on a farm — hers in Wantonwan County and then Atwater — and so she wasn't afraid of that life.

Still, the Anthonys may have had another direction, if it wasn't for the tragedy that took place in 1980. Willis' brother Harold, who had kept the farm going, was killed in a farming accident.

In addition to mourning a loss, Willis and Karen had a major decision to make. It was either 'drop everything and move back to St. Peter' or 'keep on the same path and let the family farm fade away.' With Karen's support, Willis chose the former.

"I felt a sense of responsibility, yes," Willis said.

But there are no regrets.

"We feel happy about the decision today," Karen said.

When the farm was first established by the Olsen family all those years ago, it was 155 acres, with oats and what the most likely crops. Today, Willis and Karen oversee about 3,000 acres (some of it rented), growing primarily corn and soybeans, but also rye, wheat and a number of interest crops and cover crops.

"Our keen interest is exploring alternative interest crops," Willis said. "We're getting more and more concerned with soil health, so we have an interest in crop rotation. We're also starting to grow cover crops. We have a mixture now of oats, some rye, radishes, peas."

"We feel very strongly that we have an important stewardship responsibility," Willis said. "For years, the primary concern in agriculture was what’s going to show income, and that’s important, but for longer term sustainability, we feel we have to be much more mindful of the soil."

Their son Peter finished a PhD in soils and has developed a great deal of interest in the field, according to his parents. Peter and his wife, Katey, live on the farm with their two kids much of the year, but also travel to Fairbanks, Alaska, where Katey does her own scientific research.

Though the goals and aims of the original family, who came from so far away, may have changed over time, the respect for farm and family has never died, whether it's been the Olsens or the Anthonys on the land just outside St. Peter.

Willis said he hopes grandson Jorgen and/or Anders can celebrate 200 years of the family farm in 2069, though he won't be pressuring anyone into it. For now, 150 feels good.

"I think there is something very special about feeling and knowing that we're tilling the same soil as our ancestors, we’re living among the same trees our ancestors planted," Willis said. "The sense of attachment is quite strong."

The Olsen/Anthony farm, outside St. Peter in Lake Prairie Township, earned sesquicentennial status approval from the Minnesota Farm Bureau in 2019. The approval certifies that the farm has remained in the same family for 150 years.