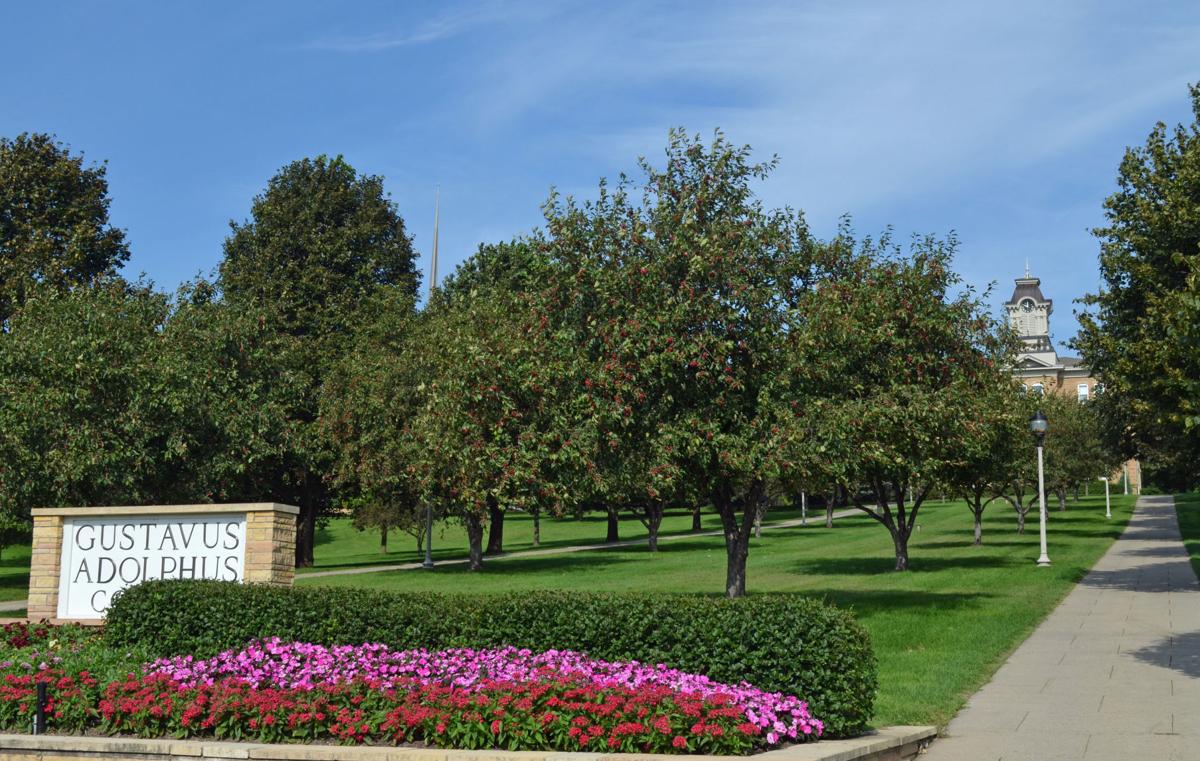 Gustavus Adolphus College in St. Peter reported the fourth highest number of sexual assaults in 2017 among colleges and universities in Minnesota. The University of Minnesota Twin Cities had the highest number, with 93 that year. (Herald file photo)

The number of sexual assault cases reported to Minnesota colleges and universities increased for the second straight year in 2017, but less than half were investigated by schools, according to data released in June by the Minnesota Office of Higher Education.

The 416 cases are the highest reported number since Minnesota colleges and universities started collecting and reporting campus sexual assault statistics to the state in 2015, when the Legislature signed it into law. This year’s report came out a few months later than usual due to staff turnover at the state agency, officials said. The 2018 statistics are expected out by the end of the year.

Among 84 postsecondary institutions across the state in the report, the University of Minnesota Twin Cities had the most reported incidents with 93 sexual assault cases reported, followed by St. Olaf College with 37 and Carleton College with 24.

Rape is the most underreported crime in the United States, according to the National Sexual Violence Resource Center. On campus, a 2016 survey by the Bureau of Justice Statistics found that 1 in 5 women and 1 in 14 men experienced sexual assault while in college and only 7 percent of students who indicated they had experienced rape reported the incident to school authorities.

While less than half of the total cases were investigated by the institutions, the reasons schools may not investigate sexual assault varies, said Laura Linder-Scholer, campus sexual violence prevention and response coordinator at the Minnesota Office of Higher Education. Some of those reasons include: the accused assaulter withdraws from the school or the victim doesn’t want to pursue the investigation for many reasons like conflicts on class schedule, trauma or the long investigation process.

“Anyone who is a part of this process on any campus can acknowledge it is a long, complex emotionally draining process for everyone involved,” said Linder-Scholer. “This is ongoing while students are still taking classes and working to stay integrated in their communities and so you will have complainants who bring forward a complaint and then say this for whatever reason is no longer helpful or healing for me and choose to step away.”

At St. Olaf, 29 out of 37 reported assaulted were not investigated because victims did not want to participate.

Kari Hohn, that college’s Title IX coordinator, attributes that to the daunting investigation process, which can take up to two-thirds of a semester to conclude.

Title IX is the federal law passed in 1972 that prohibits sex discrimination in education and requires campus officials, when alerted of sexual assault and harassment on campus, to investigate.

“They say, ‘I’m really not ready for that right now,’” Hohn said. “That’s a case that would fall into that category where the reporting student or the victim is declining to participate in the investigation process at that time.”

In Minnesota, colleges and universities are not required to submit reasons for not investigating to the state. Some schools choose to explain the situation further when submitting the annual data, but giving that information is arbitrary, Linder-Scholer said.

“My suspicion would be that there is the ability to dismiss or otherwise not pursue an investigation where the report is just not facially plausible or worthy of undertaking,” said Adam Johnson, a Title IX defense attorney in Minneapolis. “[It’s] just like the police can take in a report from somebody and not pursue it because they don’t believe that it’s warranted or merited.”

Abby Honold, a University of Minnesota graduate and rape survivor, said she understands why many victims don’t report. Honold was a junior when she was raped by a fellow student in November 2014. Daniel Drill-Mellum pleaded guilty to two counts of third-degree criminal sexual conduct and was sentenced to six years in prison in 2016.

She said speaking out about what happened to her was “an incredibly painful transition.”

“It was incredibly difficult to come forward,” said Honold, “and while I always tried to pretend that it was easier than it was, I really felt for about a year afterward that I had ruined my life by coming forward.”

She said when she was going through reporting and investigations, she feared she would be doubted while she relived “the worst thing that had ever happened” to her.

“Reporting is traumatizing for many,” Honold said. “If I didn’t know that my rapist had so many other victims, I probably would have given up.”

Honold first reported the assault to the Minneapolis Police Department, which investigated but the Hennepin County Attorney’s Office declined to press criminal charges. Prosecutors based that decision largely on a phone call recorded by a friend of Drill-Mellum during which Honold allegedly admits to having consensual sex with him, according to the police records. In the phone call, the friend mumbled the question “so it was consensual sex, right?” and Honold thought he asked her “it was actual sex” and she said yes.

She also reported the assault to the university’s Title IX office and the case was investigated by then-University of Minnesota police officer Kevin Randolph. Randolph used a warrant to get records from the university investigation.

Honold said that collaboration between law enforcement and the school helped not only the case but Randolph’s understanding of what had happened while investigating.

But collaborations like in Honold’s case don’t — and many times can’t — always happen, said Linder-Scholer. Because of the privacy of student educational records, schools can’t share information on students’ educational records other than a victim’s own. So, when a victim reports to school and law enforcement, not all information from the school’s investigation can be transferred to police.

In 2017, less than 16 percent of campus sexual assault incidents reported to Minnesota schools were also reported to law enforcement.

“Those separate institutions may elect or may want to ask follow-up questions or further develop the facts even if the student has already provided a statement to one entity or the other,” he said.

Struggle to carry on

Above all, student victims are “students” — they have classes to finish, work to do and other responsibilities in their life.

That can be “incredibly difficult,” Honold said.

She had three semesters left and had a hard time finishing classes after the assault, she said.

“My concentration almost completely disappeared,” recalled Honold. “Having PTSD alone was a big barrier — trying to juggle the stress of being a student, working full time to support myself, and going through the stress of the rape case really hurt my ability to focus on school.”

One thing that Honold feared was whether her friends and school officials would believe what she was saying.

Her fellow students became “extremely cruel toward me with harassment,” and she was told by a Minneapolis detective who did the initial investigation that the case “isn’t going anywhere,” Honold said.

The rapist, she said, even told people she knew on campus that she had filed a false report.

Those all “made me (initially) regret reporting,” Honold said.

That fear keeps many campus sexual assault victims from reporting their case, says Naomi Miezwa, volunteer services manager for Sexual Violence Center, a nonprofit based in Minneapolis. She said a lot of victims who come to the center ask similar questions: “Why did this happen to me? What could I have done to have not had this happened?”

“Lots of guilt and blame and shame,” she said, “and a lot of fear of reporting and fear of not being believed.”

Moreover, if a case involves someone on campus with more power over the victim, like a faculty member or senior student, it can be even more difficult to come forward, Miezwa said.

“How would you go about finding the strength to try to tell someone within an organization that someone within your organization or someone at a campus that another faculty member did this to you,” she said. “’Will you believe me? Will you help me change my classes?’ So, there’s just so many different areas of gray that could make it hard for someone to even want to report.”

Even when students find the courage to file a complaint, they often face an arduous path.

While a disciplinary decision is pending, victims may accidentially run into their attacker on campus. And getting an order for protection or a restraining order against the attacker can be tricky.

“This other person also has the right to be on campus,” Miezwa said. “They have to right to an education.”

Honold said that while she is grateful she only saw her attacker in court settings as the investigation played out “seeing him was terrifying.”

Although Minnesota campuses have seen an increasing number of sexual assault cases reported in recent years, that doesn’t necessarily mean sexual violence on campus is on the rise, experts say.

Rather, it may signal a change in campus culture where victims feel safe making a report and may indicate some have hopes there will be some accountability.

“We’re very pleased to see when numbers of reports to institutions are actually rising. And that seems a little counterintuitive sometimes to the public,’’ said Linder-Scholar, noting that may indicate a deeper trust in the system.

Hohn, the school’s Title IX coordinator, said she believes more reports mean the efforts St. Olaf has been putting on the issue are working. St. Olaf hired an additional full-time position at its Title IX office a year and a half ago. That employee focuses 100 percent on Title IX issues and support for students.

“It shows to our community that this is an issue that we take really seriously and that we care about and that if you do report an incident of sexual misconduct you will be listened to and taken very seriously,” Hohn said.

Campaigns like the #MeToo movement to raise public awareness on sexual violence are also contributing to cultural shifts on campus, Miezwa said.

“Sexual violence is occurring all the time and such a small, small number of sexual violence is ever reported in any capacity,” Miezwa said. “People are now feeling like I have a right to not be afraid to say what happened to me.”

Honold said it’s also important to treat every person who reports with care and respect.

“It’s extremely intimidating,” she said. “The message I’ll always have for sexual assault victims is that this was not your fault. You did nothing to cause it, and however you respond to it is OK. You deserve to choose how to move forward.”

Minnesota Public Radio News can be heard in Steele County on 103.9 FM or online at MPRnews.org.