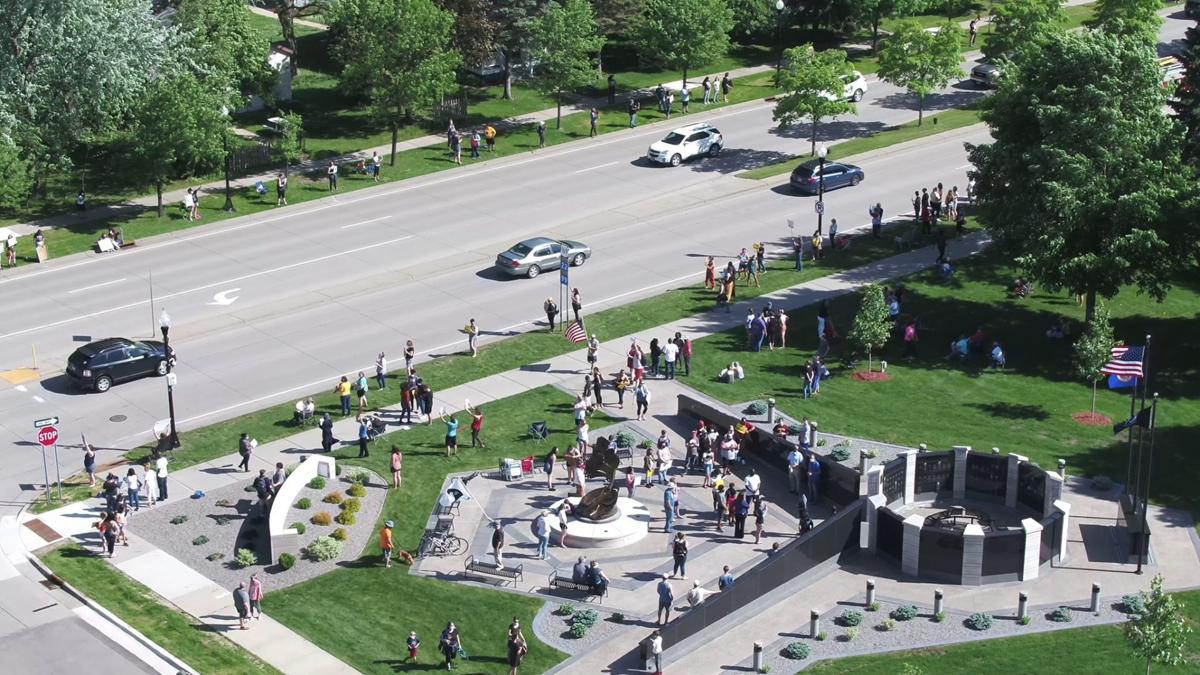 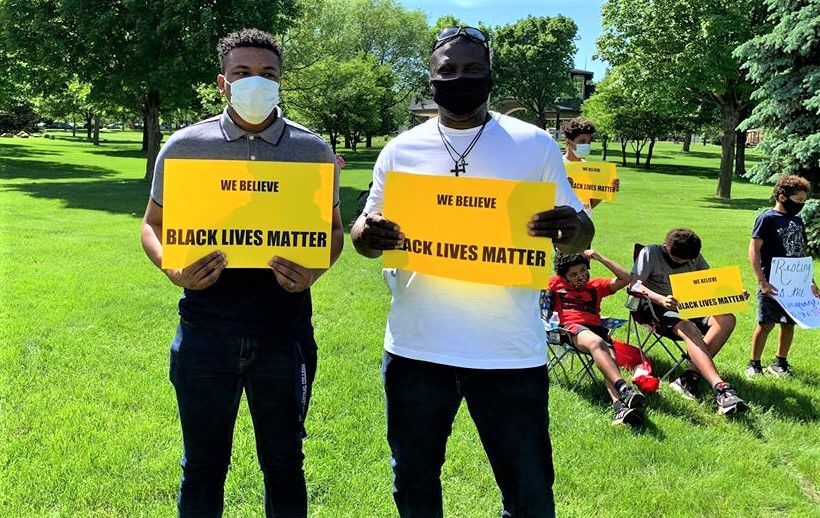 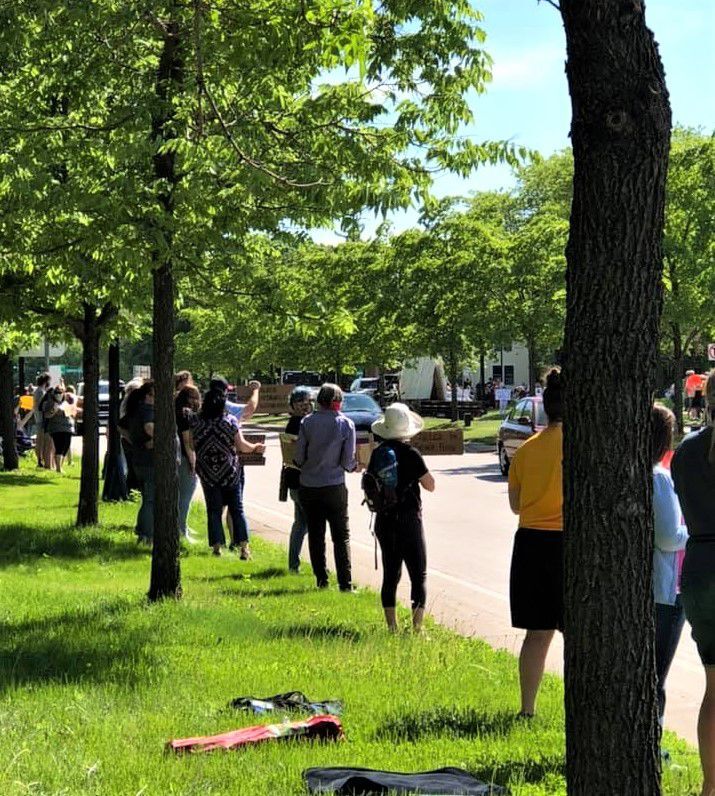 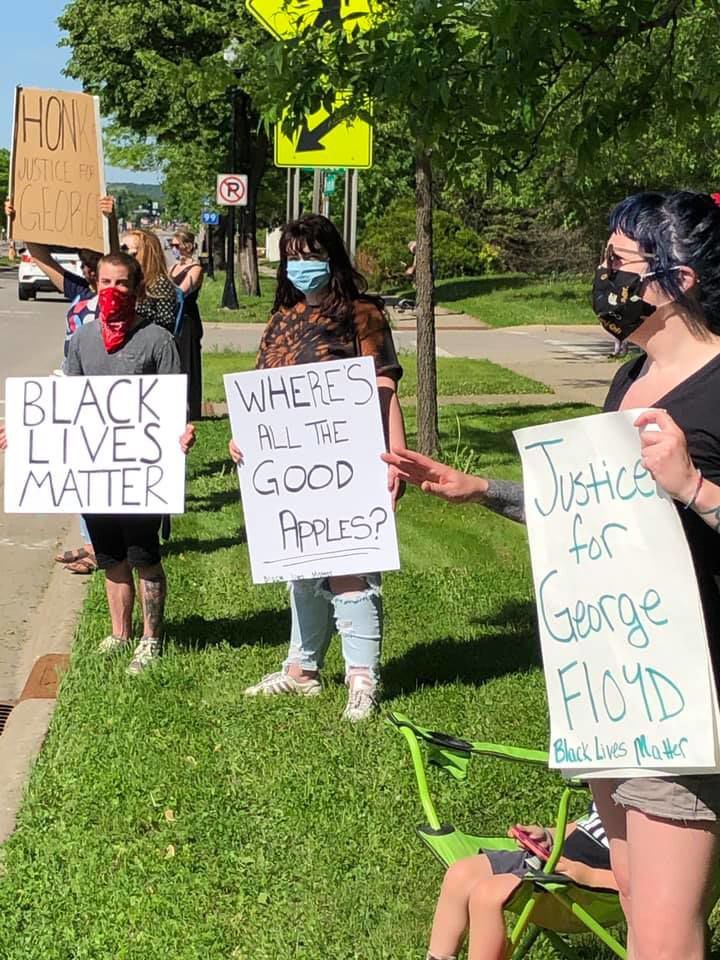 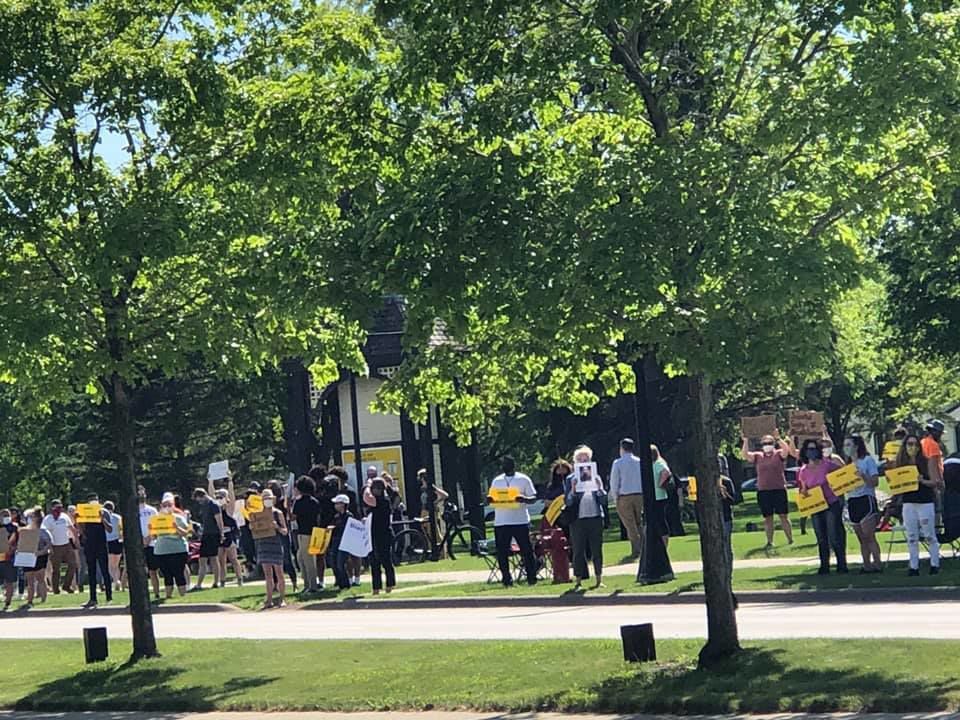 Armed with only face masks and signs, hundreds of protesters joined together in and around Minnesota Square Park in St. Peter Thursday, calling for “Justice for George Floyd.”

“What I wanted is to keep the emphasis on George Floyd,” said Bukata Hayes, executive director of the Greater Mankato Diversity Council, which covers Blue Earth, Nicollet and Region Nine counties. “I think his life was unnecessarily taken. It’s times like these, where we have to take an accounting, look around, move forward together and clearly address what happened. So this was our part to support a community that is mourning, that is hurt and looking for assistance in finding a way forward.”

The part vigil, part protest, organized by Indivisible St. Peter/Greater Mankato, paid tribute to a man who died in an officer-involved incident currently under investigation in the Twin Cities. The incident, which was recorded on video and showed an officer kneeling on Floyd’s throat, while he exclaimed ‘I can’t breathe,’ has been widely shared across the globe and has led to massive protesting, both peaceful and non-peaceful, around the metro.

Thursday night into early Friday, several fires raged in south Minneapolis and in St. Paul’s Midway area where University Avenue businesses had been sacked earlier in the day. Just after 10 p.m., protesters overran the Minneapolis 3rd Precinct station — one of the epicenters of conflict the night before — after officers withdrew.

The protests in St. Peter were much more controlled, as the group held up signs, attempting to spread awareness and ask for support to causes like Black Lives Matter.

“We wanted this protest to be a reflection of what we feel Minnesota is and can be,” said Indivisible’s Misti Nicole Harper. “Like everybody, we were horrified, grief-stricken when George Floyd was murdered. We couldn’t sit back and feel like this didn’t happen. Even though we’re in St. Peter and Mankato, we needed to make a public display to show that we are watching.”

She added, “It’s about making sure we’re working together to create a more equitable and just Minnesota for all of us to live in. We’re not going to sit by and be passive about this; we’re going to hold everyone accountable, starting with ourselves … We’re doing what we can to make this place better for marginal folks.”

Participants were asked to maintain strict social distancing at 10 feet and to wear masks.

“Because of the volume of people that showed up, we did have to ask people to spread out a bit,” Harper said. “People were generally very compliant, and I didn’t see anybody not wearing a mask. Everyone was doing their best to socially distance and stay physically safe.”

“We loved it,” Hayes said of the event. “We thought it was a great turnout. We thought it was wonderful that people were courageous enough to be out there, to hold signs, to connect. I was happy. I thought that the turnout was a great sign for us moving forward and how we do that together.”

The organizers said that while these issues can seem far away for everyone in greater Minnesota, they’re just as relevant here as anywhere else.

“I think, one, on a human level, to see what happened and to simply care about each other, I think, is important. If we can see suffering and we can see death and not be impacted, I think we lose,” Hayes said. “The other piece is that we are one state, and we are impacted by how the metro area operates. We have folks who are up in the cities to work daily; we have folks from the cities who come down to our area on weekends. We are one state. So to show solidarity with a state in mourning was important.”

Hayes was glad that the protest in St. Peter could be a peaceful one.