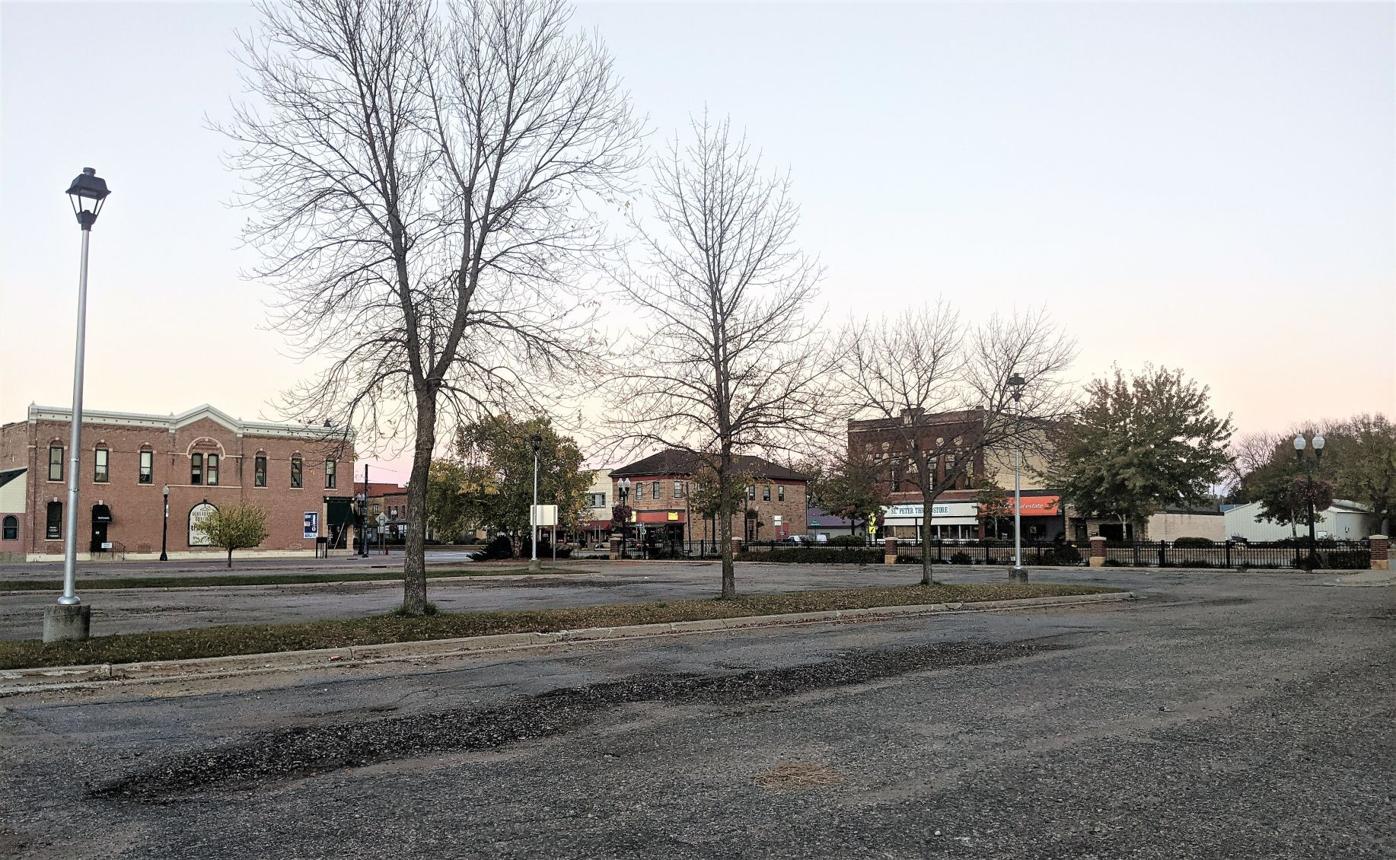 The lot at Minnesota Avenue and Grace Street in downtown St. Peter has been vacant for years, but developers are aiming to build two new buildings on the land by summer 2022. (Philip Weyhe/southernminn.com) 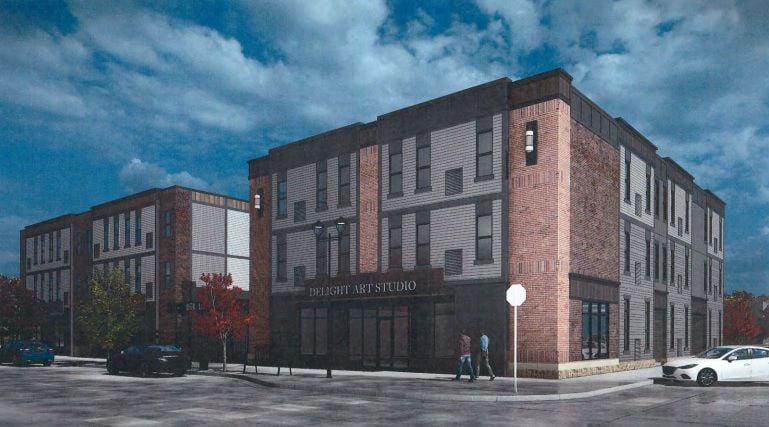 Two buildings are planned for St. Peter’s downtown to fill in the empty lot at the corner of Minnesota Avenue and Grace Street. This is a proposed rendering and not necessarily the final design; business names in the graphic are placeholders. (Graphic by Bright Pixel Design) 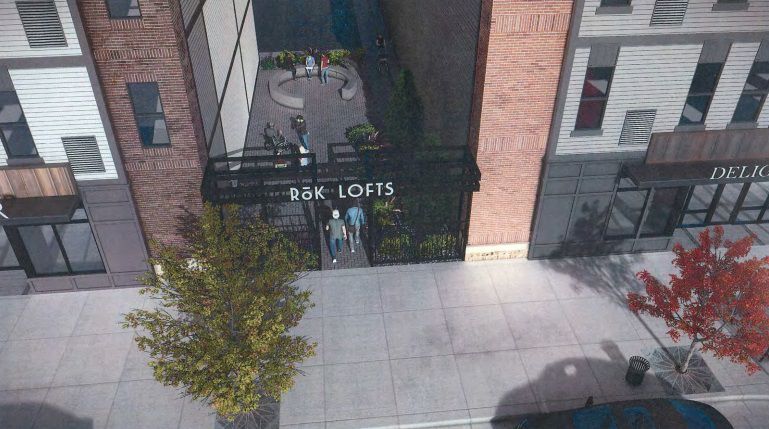 A courtyard area is planned to be placed between the two buildings proposed for the empty lot in St. Peter downtown. This is a proposed rendering and not necessarily the final design; business names in the graphic are placeholders. (Graphic by Bright Pixel Design)

Developers hope that an empty parking lot in downtown St. Peter will transform into two three-story mixed residential and commercial buildings by summer 2022.

Old Town Development, LLC, a real estate company whose properties are managed by Coldwell Banker Commercial Fisher Group, entered into an “exclusive negotiating rights agreement” with the city of St. Peter for a vacant parking lot off Minnesota Avenue. Municipal Parking Lot No. 5 is located at the intersection of Minnesota Avenue and Grace Street, on the south side of Grace.

Since that time, the developers, including the president, broker and owner of Coldwell Banker Commercial Fisher Group, David Schooff, have enlisted Matt Borowy, owner of Bright Pixel Design in St. Peter, to come up with a design plan for the two buildings they hope put in. The buildings, which would mostly be filled by 35 apartments (one bedroom and two bedroom) but would also include commercial spaces on the main level, are expected to blend in with the existing downtown.

“They’ll be slightly lower than the existing three-story buildings and slightly taller than the two-story buildings,” said Borowy. “There is a courtyard in between. It’s meant to look like brother-sister buildings that are not exactly the same. I thought that would be a bit much. The building on the south side is lighter, because the neighbor on that side is slightly lighter, and on the north side, it’s slightly darker.”

He added, “We’re using two different bricks on building one and on building two. Some Kasota stone on the bottom, some concrete units for durability. We’re using cement based siding for a lot of the exterior.”

The developers want to see a hole in the ground before winter, with construction taking place immediately after up to potential completion in June 2022. Old Town has completed several projects in town, including the Dunkin’ strip mall an Capitol Room, and Schooff said the group is excited about this project.

“This lot has been available for a long time, and this is a great, great infill project for downtown St. Peter,” Schooff said. “Again, trying to respect the design of the downtown. We’ve had other developments and renovations, and the city of St. Peter has always been great to work with. I just think there is an opportunity to take an empty lot that’s completely underutilized and continue to enhance downtown St. Peter.”

The developers are not yet revealing what plans they have for tenants in the commercial spaces, but they are negotiating with some possible clients now.

There are still steps to be taken.

The building plans have already been approved by the St. Peter Heritage Preservation Commission, which looked for the project to complement, not interrupt, the downtown historic district. The HPC reviewed the plans as to proportion, composition, rhythm, detailing, materials and color. The City Council then unofficially gave its own approval for the project at a work session, with members indicating they were happy with the proposal.

“I wanted to compliment everyone who has had a role in this, because I appreciate that it’s harmonious with the historic district but doesn’t duplicate,” Councilor Shanon Nowell said. “I was concerned about this feeling of like a strip mall, where it’s all one thing, so I’m really pleased how it turned out.”

Councilor Ed Johnson agreed, “I think it’s going to be a big improvement over what we’ve got there now.” This got a chuckle from the room, as most considered any development a significant upgrade from an empty parking lot in the city’s downtown.

Mayor Chuck Zieman expressed general approval, but he noted a couple concerns — the most significant being the number of parking spaces. The design features about 37 parking stalls for the 35 planned apartments. Zieman did not indicate that this would affect his vote on the project at a future meeting.

The council is expected to vote on the sale of the land from the city to the developers at a meeting Oct. 25. The council will also need to approve the final proposed design, along with a request for Tax Increment Financing, as an incentive for the project. TIF would allow the developers to utilize property taxes gained from the improvement to go toward the cost of development.

The lot at Minnesota Avenue and Grace Street has been vacant for years, and the city has made continuous efforts to find a developer there. It has served regularly as the St. Peter Oktoberfest “fest-grounds” but has had little use beyond that in an otherwise busy downtown.

Just across the street, on the north side of the Capitol Room, the Arts Center of Saint Peter recently came into possession of another vacant lot, which it is developing into a landscape garden and outdoor walking space. Both of these developments could go a long way in plugging some of the remaining holes in the community’s downtown and historic district.