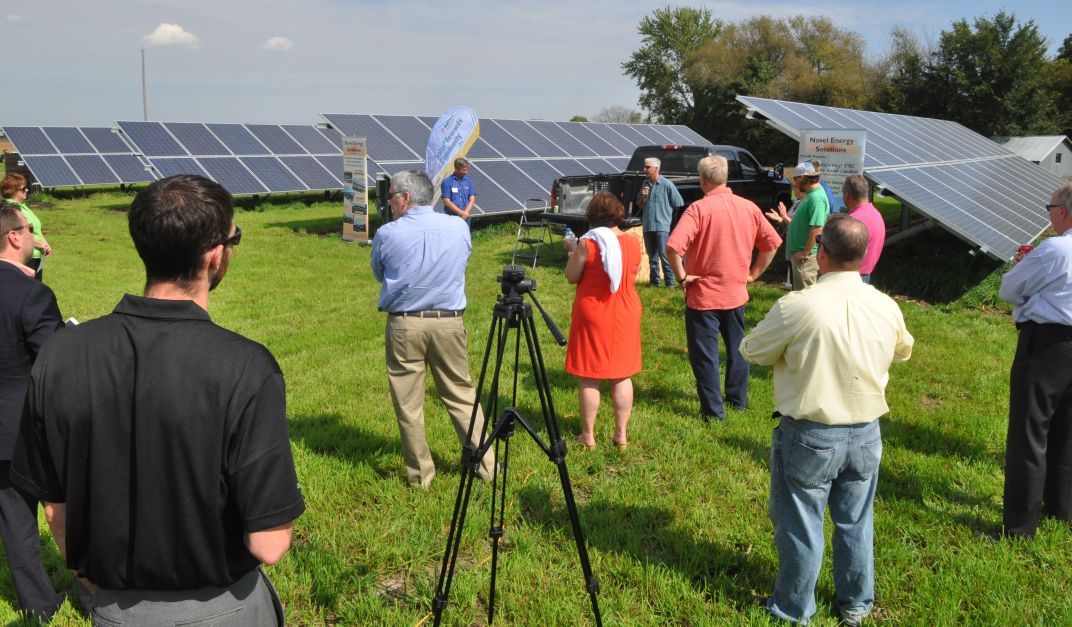 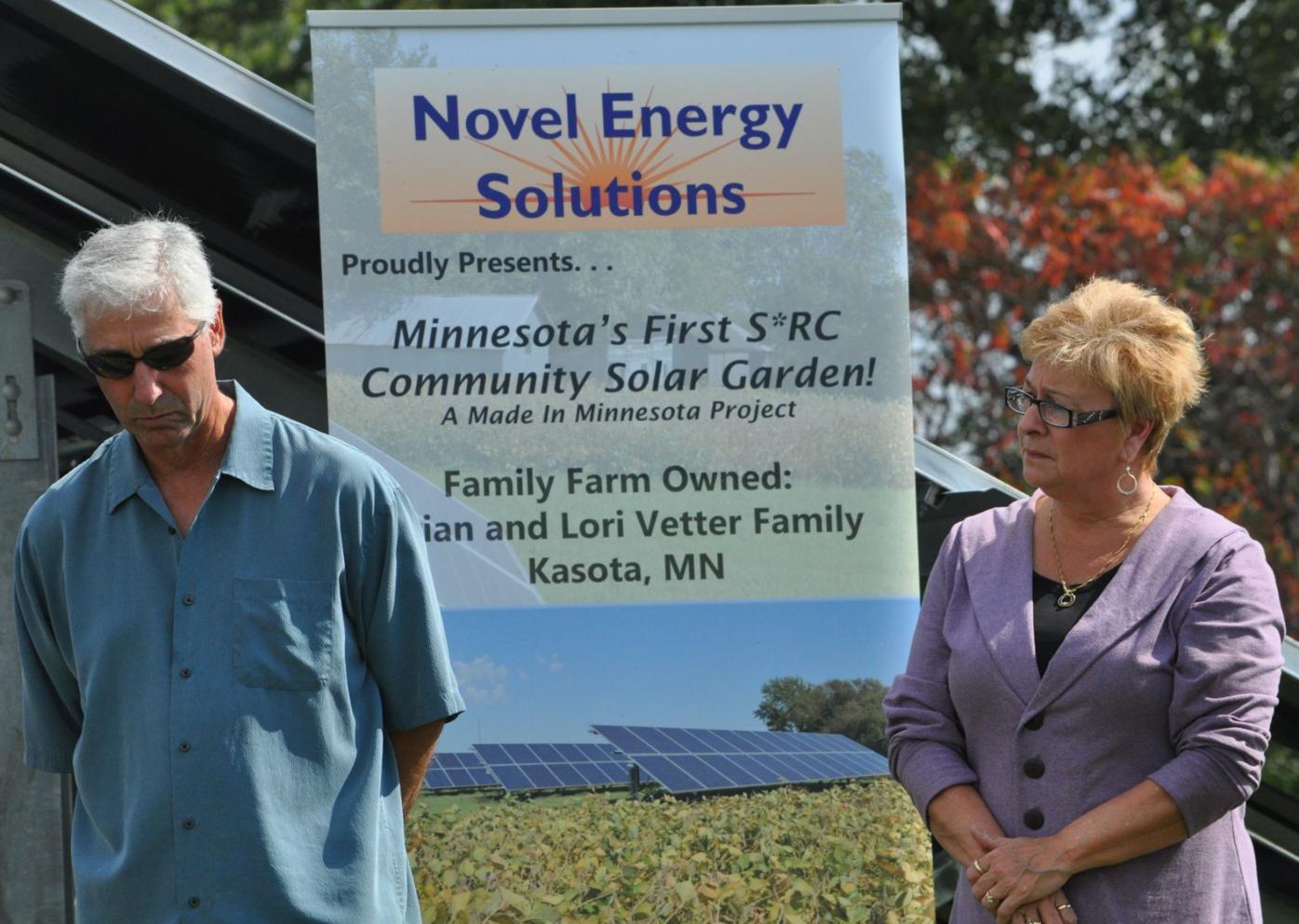 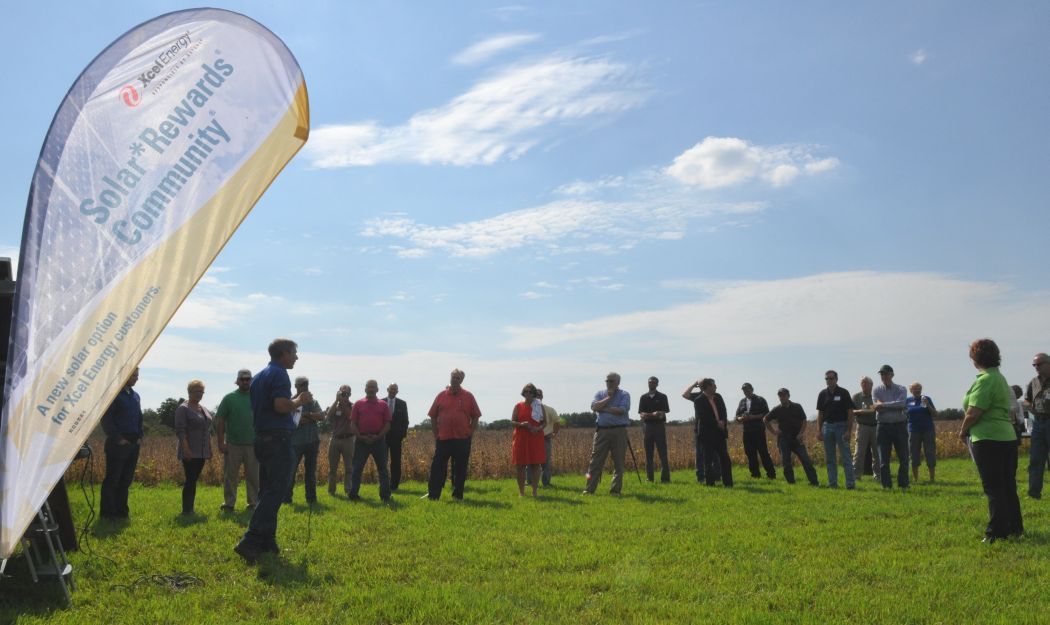 The bright, sunny skies were a near perfect setting to launch the first-of-its-kind community solar garden project for Xcel Energy at the Brian and Lori Vetter farm in rural Kasota. (Dana Melius/St. Peter Herald)

The bright, sunny skies were a near perfect setting to launch the first-of-its-kind community solar garden project for Xcel Energy at the Brian and Lori Vetter farm in rural Kasota. (Dana Melius/St. Peter Herald)

It was near perfect, sunny conditions Friday to showcase a first-of-its-kind community solar garden at the Kasota farm of Brian and Lori Vetter.

Four other local energy subscribers are also expected to join to project, which is a partnership between the Vetters, Xcel Energy, the St. Charles-based Novel Energy Solutions, and several state and federal programs. The large, four-unit system incorporates 96 smaller solar panels and is expected to provide 36 to 40 kilowatt-hours of solar energy. The farm is located about halfway between St. Peter and Mankato on Hwy. 22’s west side.

“I just thought the cleanness of solar was the best for my family,” Brian Vetter said Friday before a host of state, regional and federal officials, as well as interested locals. He added that the changing landscape on clean energy sources has prompted him and other farmers to look at alternatives, as well as an added business opportunity.

“This is another ‘crop’ we can produce on our land that is good for the environment, good for the soil and saves all the subscribers on their electric bill,” he said.

Vetters have teamed up with Ralph Kaehler and his son, Cliff, who currently serves as CEO of Novel Energy Solutions and is also the fifth generation on the family’s Century Farm in southeastern Minnesota. The Vetters, as well, run a Century Farm, and both families stressed the importance of providing clean energy options for future generations.

It’s Xcel Energy’s first solar project within the company’s Solar Rewards Community Program, which provides subscribers a credit on their electric bill for the electricity produced by the solar garden.

Novel is the company which constructed the solar panels on the Vetter farm and is looking for others interested throughout Minnesota and beyond, according to Ralph Kaehler. He facilitated Friday’s informational session. The company’s pitch also emphasizes the farm business opportunity: “Another crop: Harvesting the Sun for a Brighter Tomorrow.”

“By nature, we’re corn and soybeans farmers,” Kaehler said. But depressed farm prices and growing supplies are forcing farmers to look for new business opportunities. Solar energy, he said, is one such option.

Kaehler said Novel provided 100 percent of the financing for the Vetter farm project, which cost $130,000. But Kaehler said such projects typically will provide up to 60 percent savings due with a 30 percent tax credit and five years depreciation. The units have a 25-year partnership agreement, the usual life of the panels, according to Kaehler.

“It’s been a long time coming, but we’re on the verge … and this will just escalate in the future,” Junke said of solar energy projects.”

It Vetters’ solar project also took a bit longer to go online than originally planned, as construction was completed in March. However, Xcel didn’t complete hook-ups until just recently.

While the Vetter farm project is Xcel Energy’s first community solar garden in its Minnesota service area, it’s not the first in the state. Wright-Hennepin Cooperative Electric Association put up the state’s first in 2013.

Kaehler also stressed the importance of bringing back dedicated and well-educated rural youth. He said Novel’s company and future includes Minnesota college graduates from such reputable post-secondary institutions such as Harvard, Yale and Georgetown.

A 22-year-old Waseca resident, Stephanie Brase, is also currently interning at Novel before heading out to Germany for a study abroad opportunity. She’s been impressed by the solar project’s potential in Minnesota. She’s the daughter of Philip and Sigrid Brase, of Waseca.

“I had the idea of doing something with solar panels,” she said. “And I’ve learned a lot. It seems like it’s really going somewhere.”

The Vetter family is hoping so. But time will tell just how successful the community solar garden becomes, Brian Vetter said.

“I tell you, we’re going to know a lot more in a year from now.”