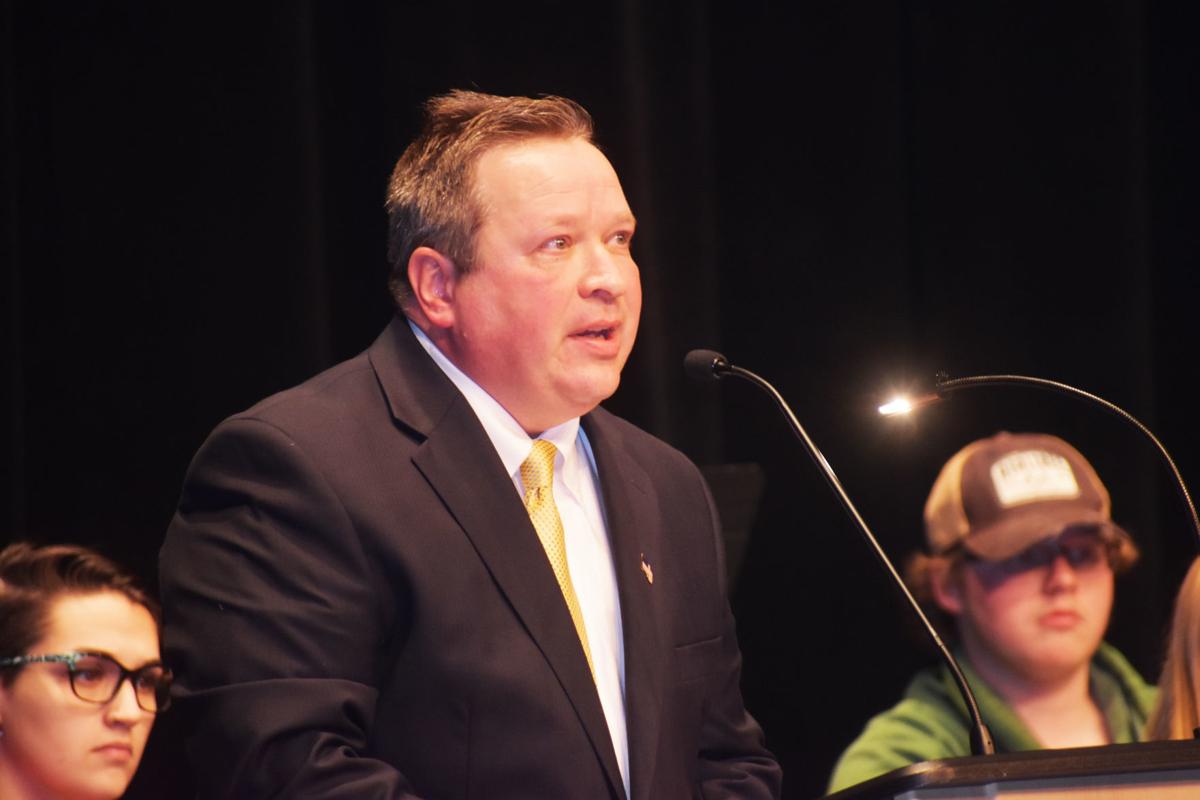 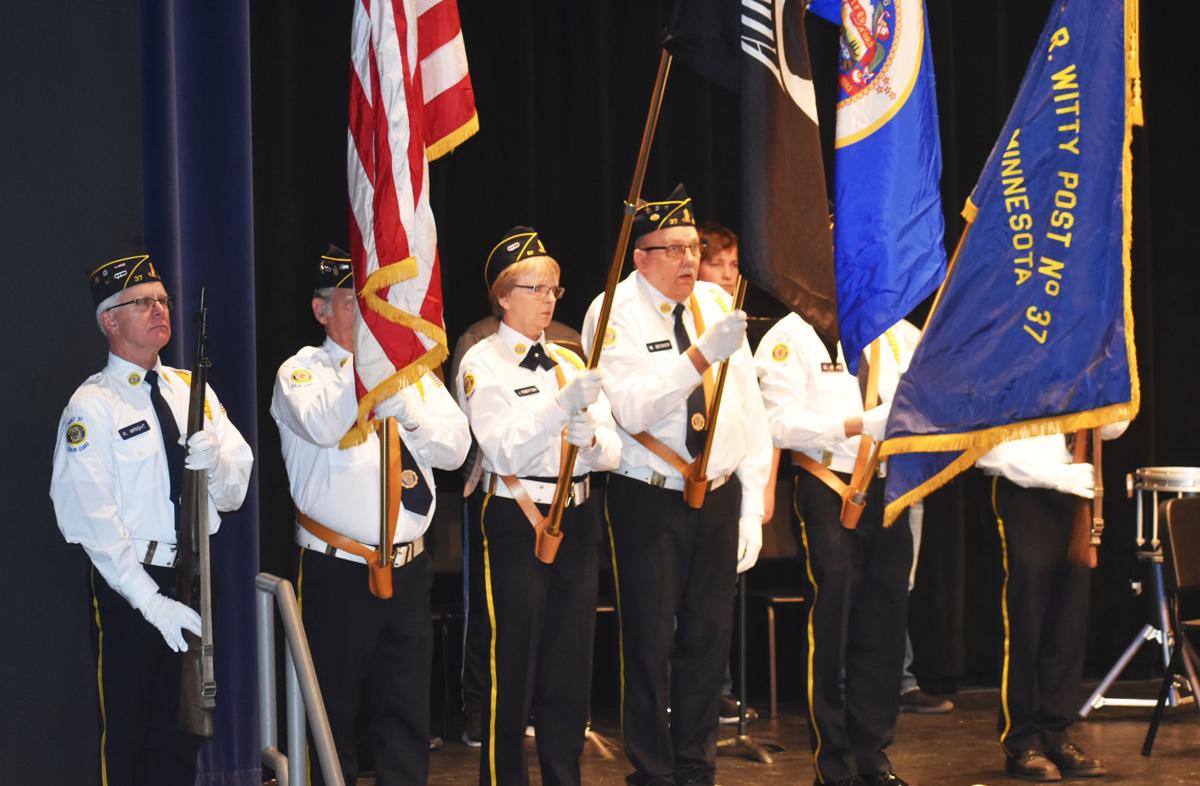 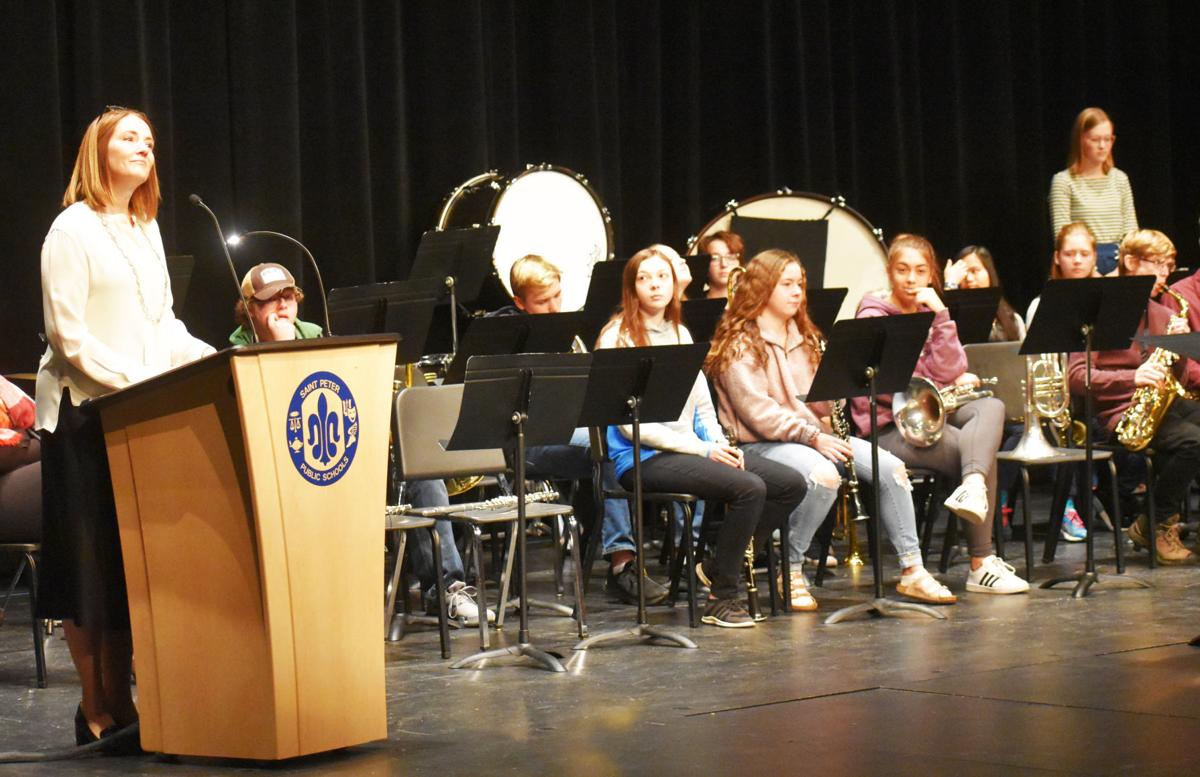 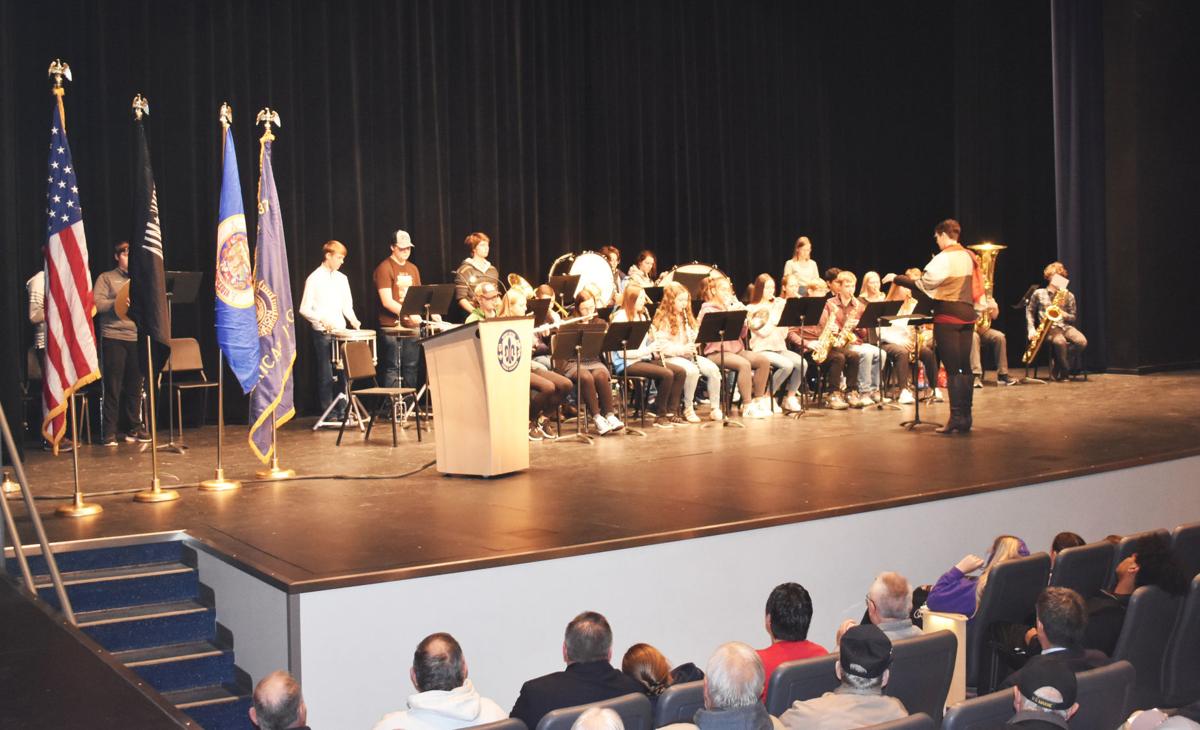 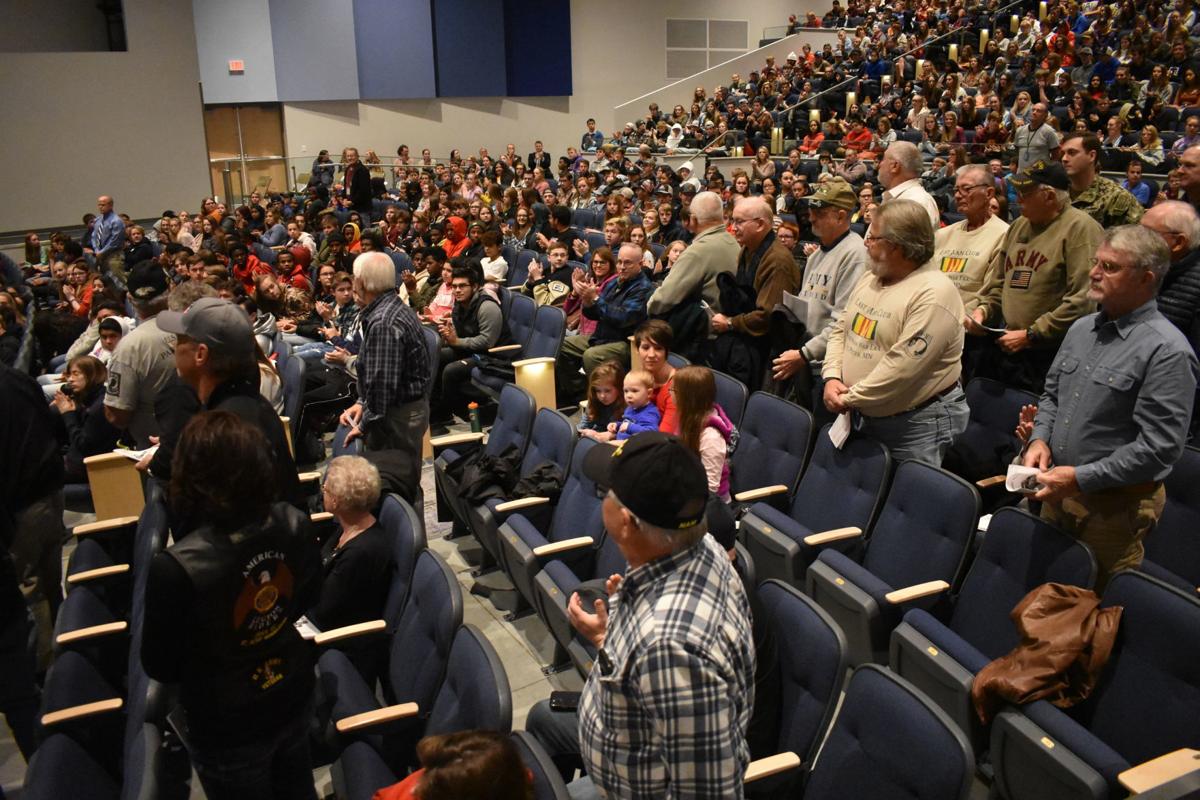 Veterans in the audience were asked to stand up for a round of applause. (Philip Weyhe/St. Peter Herald) 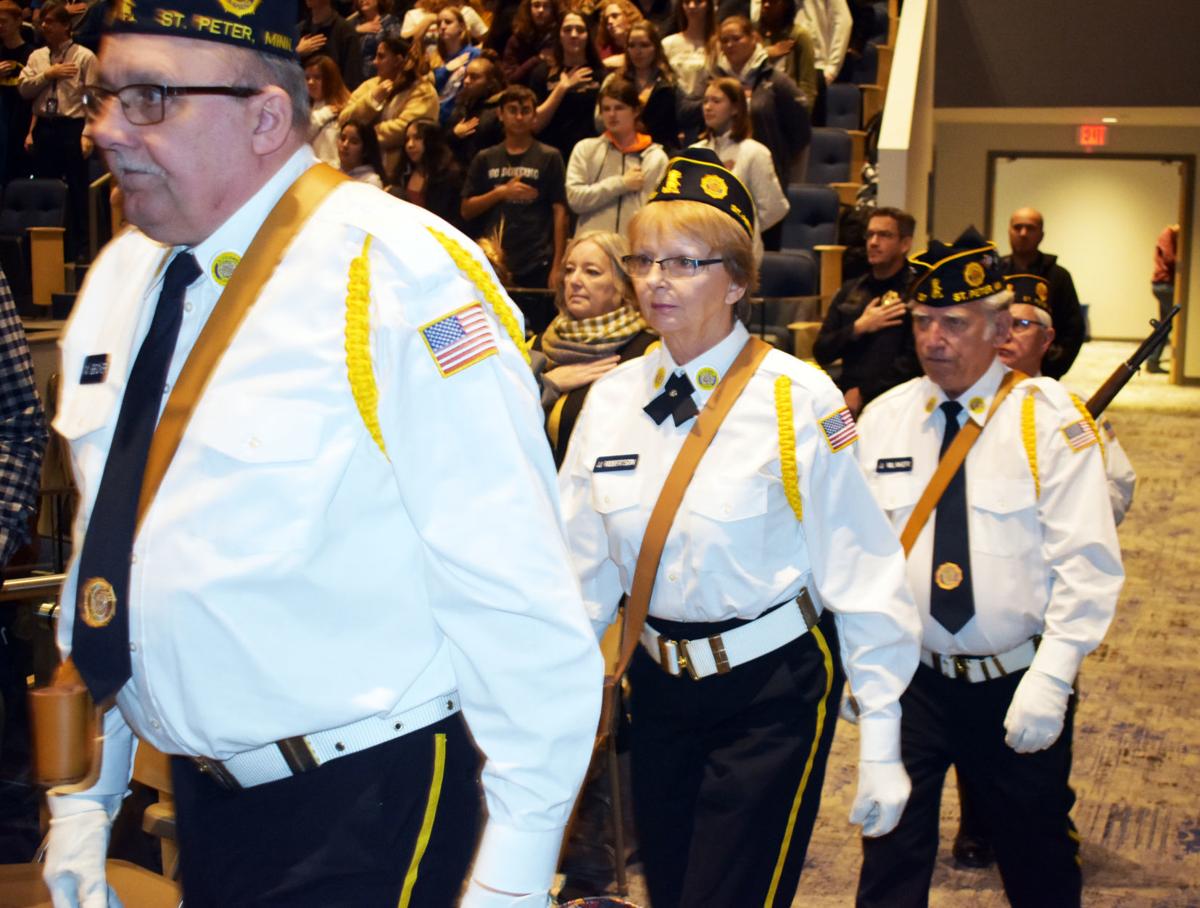 Legion members headed back to the stage to retire the colors at the end of the program Monday. (Philip Weyhe/St. Peter Herald)

Veterans in the audience were asked to stand up for a round of applause. (Philip Weyhe/St. Peter Herald)

The lesson taught Monday morning at the St. Peter High School Performing Arts Center was to not just be grateful, but to show it.

During the annual Veterans Day program at the high school, honorary guest speaker Mark Roemhildt, a Navy veteran and 1987 St. Peter High School graduate, told students in the audience that a ‘Thank you’ to a veteran can go a long way. He explained that it’s for their futures that service members are fighting and working.

“You are the future of America, and there is nothing more precious than that,” he said.

The program started off at 9:30 a.m. Monday morning in the packed auditorium with members of the St. Peter American Legion presenting the colors, bringing the various military, national and local flags onto the stage. Next, the St. Peter High School concert choir sang the national anthem. And then Principal Annette Engeldinger welcomed the crowd, noting the high school has hosted a program on Veterans Day every year since 2011.

“Each year, we welcome veterans and their families to our facility,” she said. “We believe it is important to honor and recognize all veterans who have served our country in the armed forces.”

Engeldinger then introduced Roemhildt. The St. Peter native attended the University of Wisconsin, Madison, where he earned his Commission as an Ensign through the Naval Reserve Officers Training Corps (NROTC) program. He was designated as a surface warfare officer and served on nearly every ship class in the United States Navy.

He started off with the general point of his speech.

“I saw a bumper sticker the other day which summarizes my thoughts in just a few words,” he told the crowd. “It said, ‘If you enjoy freedom, thank a veteran.’”

Roemhildt elaborated on why that struck him. He spoke of what the military does in war and battle, “combating tyranny and oppression.” He noted that veterans “endured incredible hardships to defend freedom in faraway lands.”

But the guest speaker spent more time talking about what the military does in peacetime. He said he wanted to touch on that, because it’s often overlooked. He spoked of the Coast Guard’s rescues at sea, the Army’s maintenance of inland waterways, the Air Force’s efforts in space, and the National Guard’s response to major weather events, like the 1998 tornado in St. Peter.

Roemhildt, though, went into the greatest detail on the Navy’s efforts to aid Indonesia and Thailand following the major tsunami there in 2004. He had good intel on the event; he was there.

“The damage we witnessed was so extensive that we had to remain a distance out to sea, because we could no longer consider our nautical charts accurate,” he said. “I tell this story to highlight the awesome capability the U.S. military holds outside the traditional roles of combat. I am absolutely convinced there is no other organization in the world, military or otherwise, that could’ve brought the capability the Navy and Marine Corps team did to that international crisis.”

Circling back to his thesis, Roemhildt reminded the students of what their tributes to veterans can mean.

“I can assure you that veterans would love to hear from you,” he said. “In fact, veterans would appreciate hearing from you possibly more than anyone else. It sounds a little corny maybe, but you’re the reason they do what they do.”

After Roemhildt’s speech, the St. Peter High School concert band played “God Bless the U.S.A” and Engeldinger then had all veterans in the audience stand for recognition. Finally, the Legion members returned to the stage to retire the colors, marking the end of the 2019 Veterans Day program.