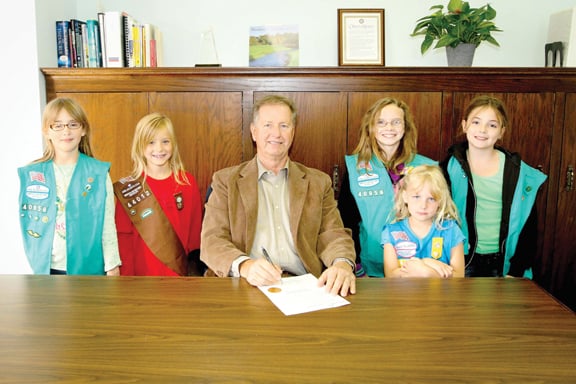 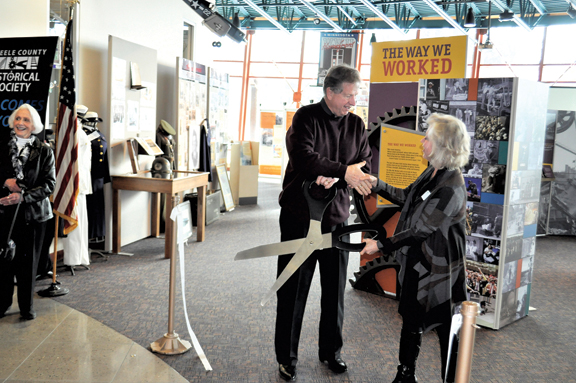 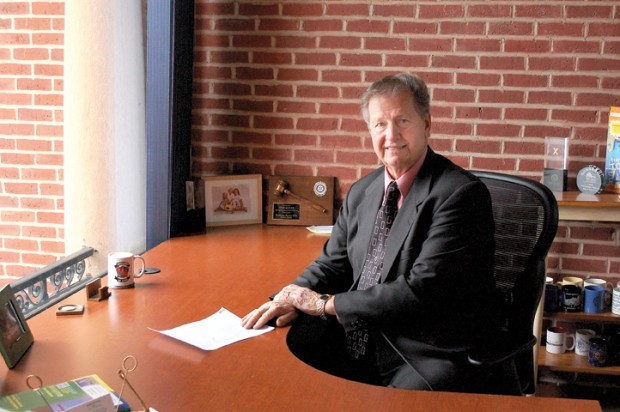 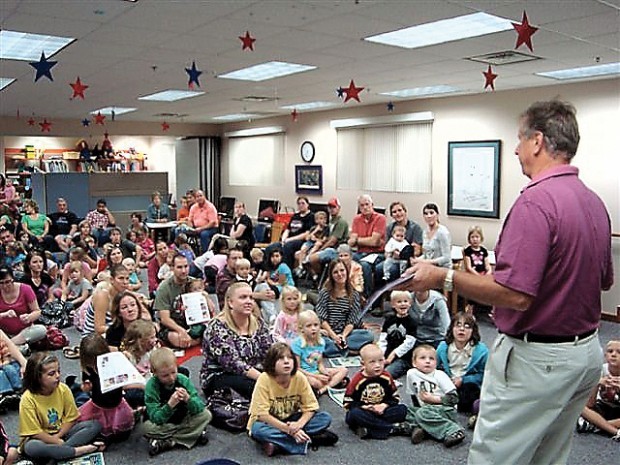 Though he may be best known nowadays as Owatonna’s longtime mayor, Tom Kuntz has spent nearly his entire life in service of the public.

“I was probably one of few kids who went through sixth grade at a country school, a one-room country school in Havanna,” Kuntz said.

While in high school, a chance encounter turned into a lifelong partnership. Kuntz’ sister spent the summers working at Bible camp in Onemia, and while taking her to work one weekend, he met his future wife, Shelby.

After his graduation, Kuntz and a few of his friends decided to enlist in the United States Air Force.

“I joined the Air Force in September of ’63,” he said. “There were four of us that were going to go in under the buddy plan, and three of us were accepted.”

Kuntz spent the next eight years in the employ of the U.S. government, a career that afforded him many opportunities and a chance to travel both the nation and the globe.

From basic training in Texas, Kuntz shipped out to Clark Air Force Base in the Phillipines. After that, he returned stateside, spending time at bases in California and Utah before heading out to England. Though he never saw combat, it wasn’t for lack of trying.

“We tried to volunteer to go to Vietnam, but we were doing maintenance on VIP planes that flew the colonels back and forth, so we had to stay,” Kuntz said.

The call of family life led Kuntz to leave the Air Force at the end of his second tour.

“Our daughter was 5 years old and was going to be starting school,” Kuntz said, noting that the instability and uncertainty of military life was losing its appeal. “I didn’t really feel like I wanted to raise my family in an Air Force environment.”

As luck would have it, his time in England resulted in a lead on a job close to home.

Unfortunately, Kuntz’ return to civilian life was in the dead of winter — not the most opportune time to seek employment in the construction industry in Minnesota.

“I got home on Dec. 10,” Kuntz said. “I called him, and he said, ‘It’s pretty slow right now, maybe check back with me in January or February.”

But fortune smiled on Kuntz, and he wouldn’t be without work for long. A high school classmate told Kuntz about an opening at Owatonna Public Utilities for a meter reader.

“I was working on Dec. 16 as a meter reader for Owatonna Public Utilities. I thought I was going to have this nice long Christmas vacation,” Kuntz laughed. “It wasn’t to be, but the good Lord had a plan.”

The position as a meter reader was a spring board for Kuntz, who would stay with OPU for the next three decades. During that time, he would rise to the top of the utility’s management chain, taking over as general manager in 1997. It was aposition that he would hold until his 2003 retirement.

But for Kuntz, retirement was just a transition to a different end of the public sector.

“I got a call from Lisa Purvis, who was the (Owatonna Area Chamber of Commerce and Tourism) director,” Kuntz said. “Lisa asked, ‘How retired do you want to be?’ I asked, ‘What do you have in mind?’”

Then-mayor Peter Connors had decided not to seek another term, leaving the ticket open, and Purvis encouraged Kuntz to seek the seat.

“I thought it sounded interesting, and I said, ‘Maybe I’ll do that,’” Kuntz said. “And that’s how I decided to run for mayor.”

Kuntz is proud of the growth the city has experienced during his time in office.

“When I first took over, we didn’t have a lot of shopping opportunities in Owatonna,” he said, noting that many city residents headed to Rochester or Mankato to do much of their shopping.

In the coming years, the city welcomed several large retailers, such as Cabela’s, Fleet Farm, Lowe’s and Kohl’s, among others.

Kuntz also pointed to continued growth in the city’s industrial base during his time in office, particularly the introduction of Chart Industries and the recently announced $30 million expansion at Viracon.

“(The Viracon expansion) was probably our first shot at having to compete internationally,” Kuntz said. “Viracon looked at Owatonna, Georgia, Utah, Mexico and someplace overseas. Putting together a package that would compete with those other entities to ensure that we kept a hold on Viracon within our community was a challenge, but the group was up to the occasion.

He also noted the construction of the health care campus on the city’s north side as being a particularly proud moment, for both he and the city.

“Allina Hospital built a new facility. I know they had a couple of hospital directors that tried to accomplish that but were unsuccessful,” Kuntz said. “Allina had committed most of their funds to the metropolitan area, and we were successful in petitioning to the Allina board and have a brand-new state-of-the-art hospital in Owatonna.”

Kuntz credits the Partners for Economic Development — a partnership between the city, county, OPU, the chamber of commerce and the Owatonna Business Incubator — for much of the success his administration has seen.

“Everybody is really committed to the success of not only Owatonna, but also Steele County,” Kuntz said. “You look at some of the other cities around the area, you hear rumors that maybe the city, county and maybe the school district can’t get along. That’s not the case in Steele County. Everybody is on the same page to try and see benefits of added growth."

But one thing the mayor has not been able to see through to completion is the expansion of Highway 14 from two lanes to four, something he says — and has been saying — will help the city further grow its economy.

“I think it’s something that many, many people have dreamed of all the way back to the late ‘60s, early ‘70s that we need to have a four-lane highway in southern Minnesota to take care of economic development. It’s been just piece-mealed together, which has been very, very frustrating.

“The chamber did a study a while back, in that study, it was determined that 70 percent of growth in southern Minnesota was going to occur along Highway 14. When you have people like Coca-Cola come to town, hoping that they can distribute their product not only north and south, but also east and west along a four-lane highway, and you get one section of it done but you don’t get another section of it done, it’s frustrating.”

Kuntz says that piece-meal approach has not only hindered economic development along the corridor, but also endangered public safety.

There have been a few missteps along the way, including a failed bid for the state House of Representatives in 2008.

“I ran for the House of Representatives and I was unsuccessful,” Kuntz said.

Kuntz threw his hat into the ring when Rep. Connie Ruth, an Owatonna Republican, opted to retire.

“Connie was retiring, and Connie had approached me to see if I had any interest in it,” Kuntz said. “I do like politics, and I thought that my being able to find some common ground in a lot of different projects at the state Capitol would be beneficial, but it just wasn’t to be … Kory Kath was running for his first term, and Kory was successful in taking it from a Republican-held seat for many, many years to a Democratic-held seat.”

Kuntz also sought the Republican nomination to fill the state Senate seat vacated by Dick Day in 2009, but lost his party’s nomination to Waseca Republican Mike Parry, who was ultimately elected to the post.

Keeping in the ring

Ultimately, it is the connections that being a public servant provides that keeps Kuntz in the political ring.

“If you’re going to retire and just go and watch TV and not have any other connections, I think you would be pretty bored,” Kuntz said. “I think the nicest thing about being mayor of the great City of Owatonna, it keeps you involved.”

That involvement includes a tireless advocacy for his hometown. In addition to his mayoral duties, Kuntz has served as a past president of the Coalition of Greater Minnesota Cities and as a board member for the League of Minnesota Cities. Kuntz also currently holds seats on the National League of Cities’ economic development committee and American Public Power’s policy committee.

“Getting involved in those type of things in the position level is very important,” Kuntz said.

Through it all, Kuntz says his faith has carried him through both his successes and his failures.

“My Christian values are what’s important to me, and I think sometimes we’ve lost some of that and we need to make sure that we continue to get that back,” Kuntz said.

As part of regaining those values, Kuntz led a successful campaign to allow city council meetings to open with a prayer by a local clergyman, something he is very pleased with.

As for the future, outside of spending time with his three children and his grandchildren, Kuntz hasn’t ruled out another run at the mayorship when his current term expires.

“It’s year by year,” Kuntz laughed. “As long as there’s still fire. I don’t want to sit back and be a mayor to be a mayor. If I don’t have momentum, it would be time for somebody else to take it over.”

Reach News Editor Jason Schmucker at 444-2377, or follow him on Twitter.com @OPP_jason