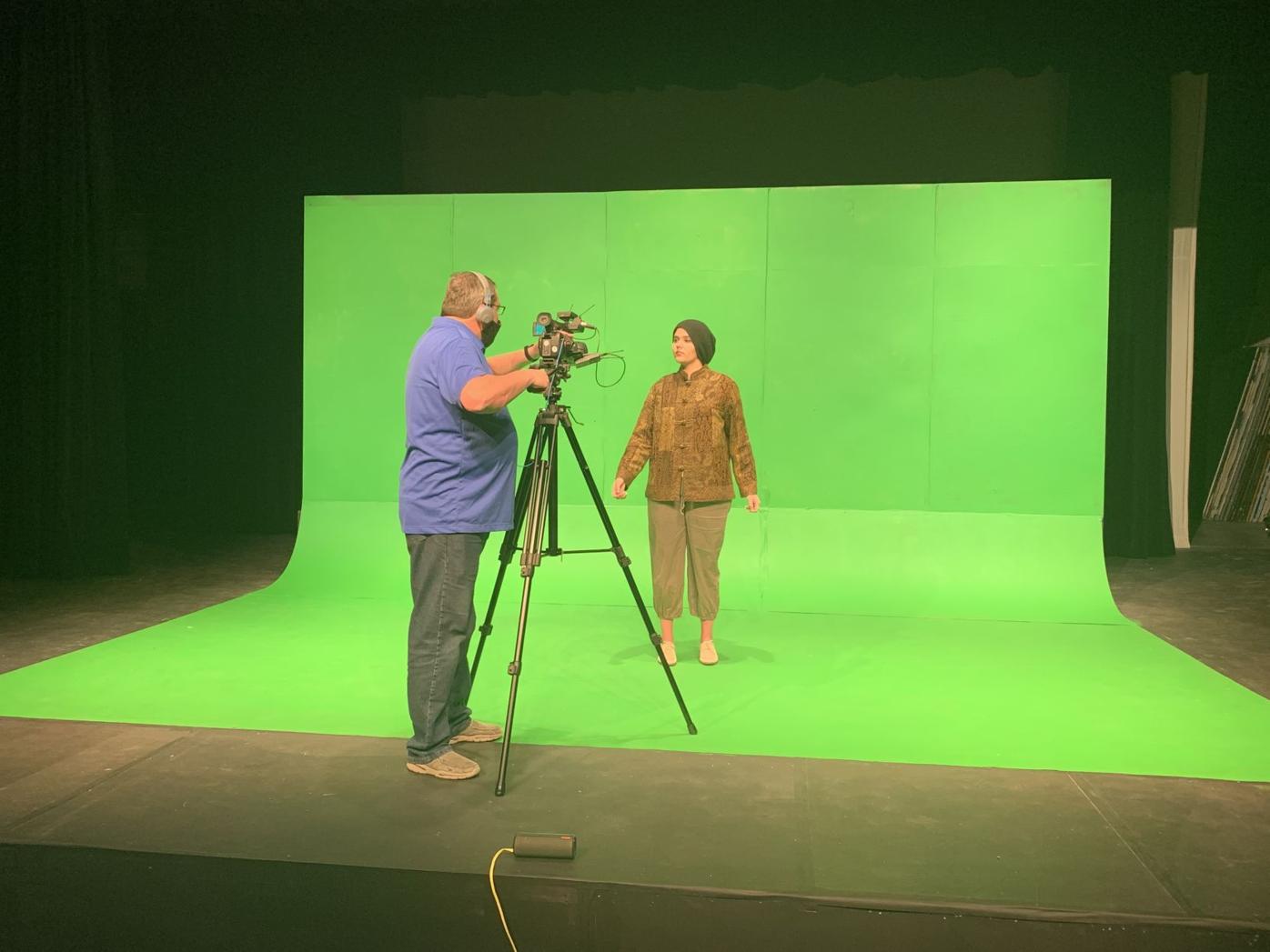 John Deyo films Yasmin Bacelar de Souza for Riverland Community College’s “As You Like It.” (Photo courtesy of Lindsey Williams) 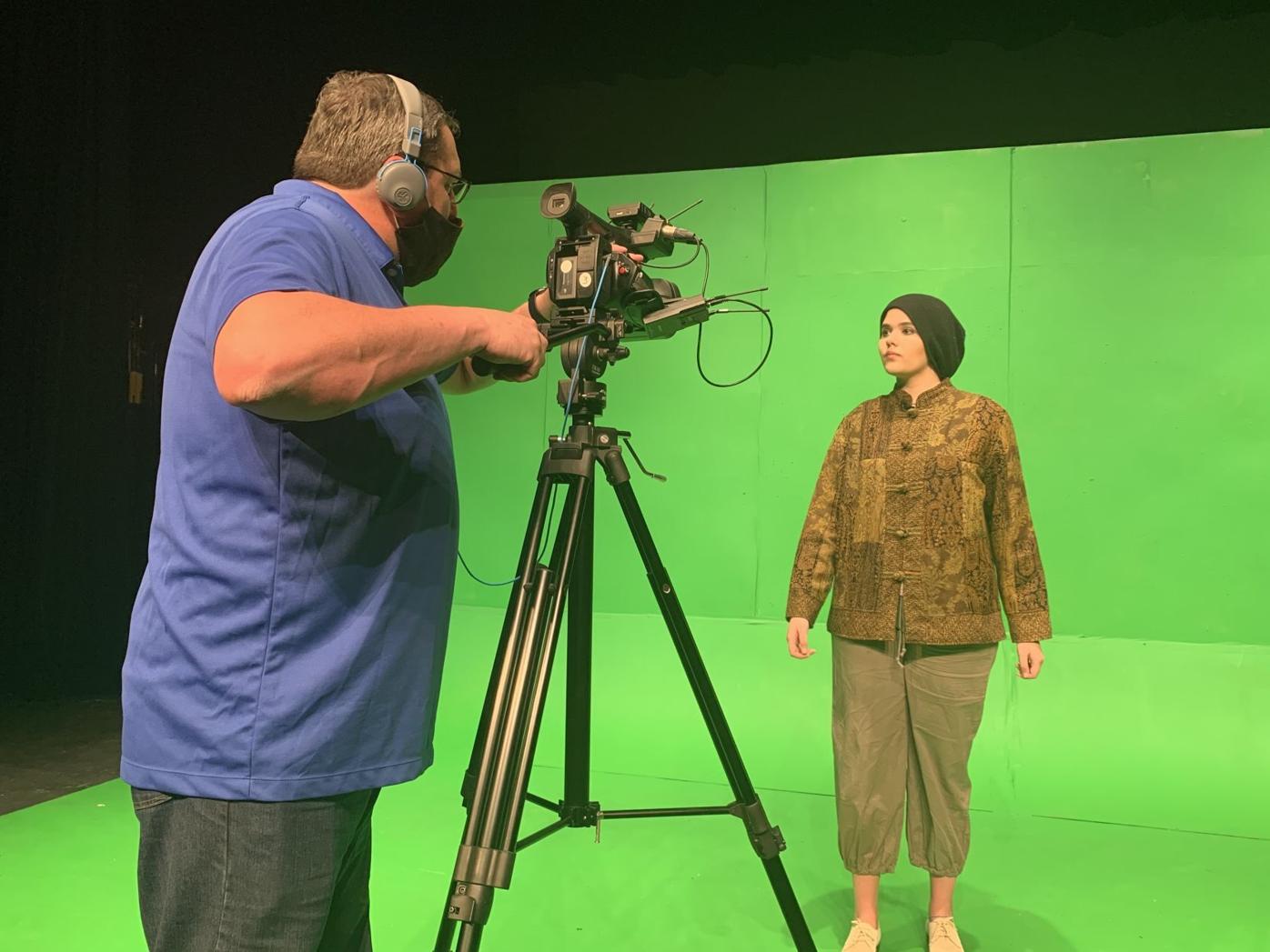 Technical director John Deyo films actress Yasmin Bacelar de Souza, who plays the character of Rosalind. The musical is shot in front of a green screen, then actors are placed together in the same scene after editing.(Photo courtesy of Lindsey Williams) 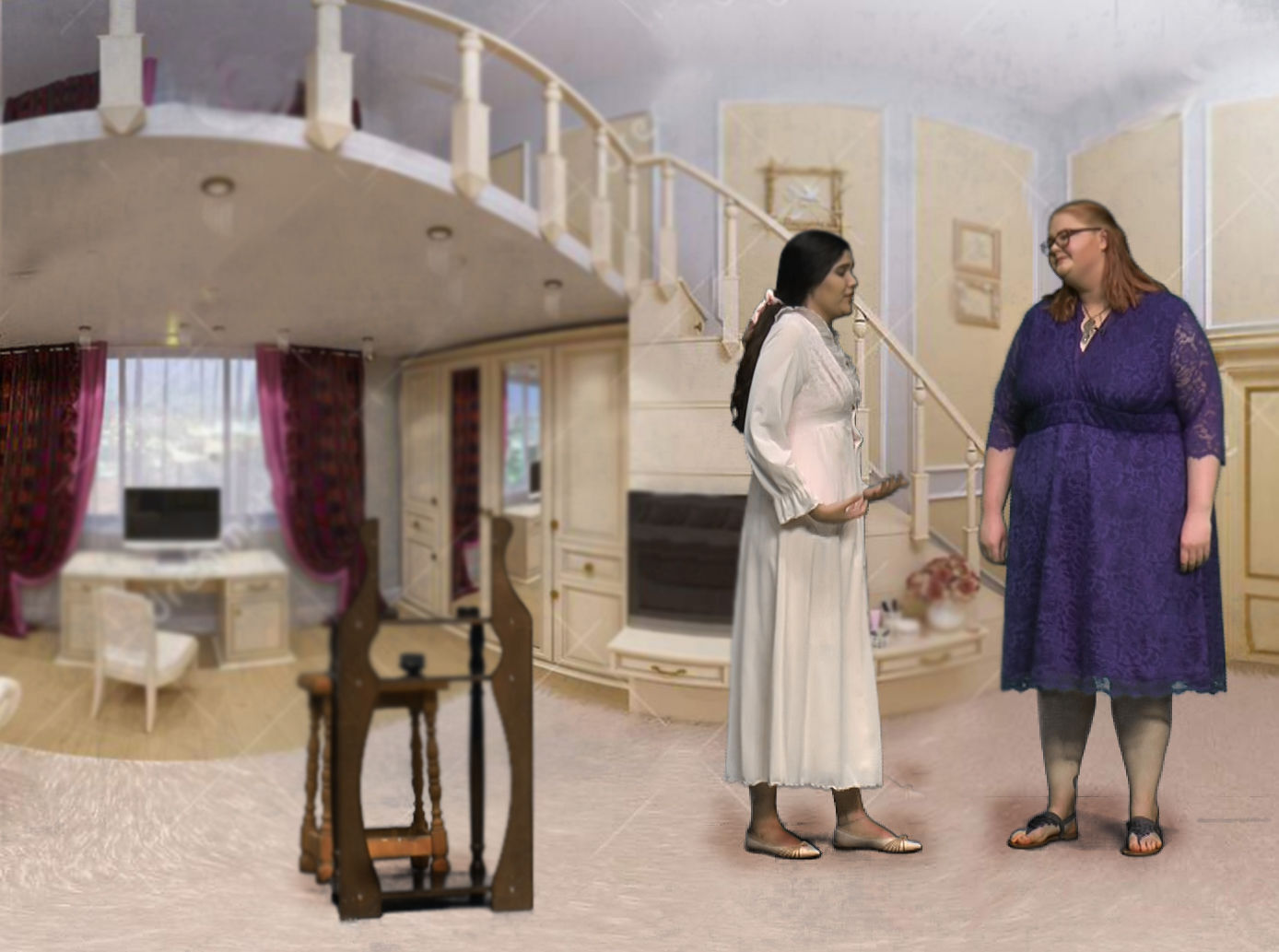 A screen grab from Riverland Community College’s “As You Like It.” The musical will be streaming from April 23 through May 1. Actors are filmed acting out their part separately and then placed in the scene together via editing. (Photo courtesy of Lindsey Williams)

John Deyo films Yasmin Bacelar de Souza for Riverland Community College’s “As You Like It.” (Photo courtesy of Lindsey Williams)

Technical director John Deyo films actress Yasmin Bacelar de Souza, who plays the character of Rosalind. The musical is shot in front of a green screen, then actors are placed together in the same scene after editing.(Photo courtesy of Lindsey Williams)

A screen grab from Riverland Community College’s “As You Like It.” The musical will be streaming from April 23 through May 1. Actors are filmed acting out their part separately and then placed in the scene together via editing. (Photo courtesy of Lindsey Williams)

The pandemic has put a damper on performances throughout the last year, but Riverland Community College theater students are finding new ways to act to overcome the various restrictions of the pandemic.

Local students at the Owatonna campus will be acting in “As You Like It,” a musical available to stream on demand April 30 through May 8. The musical tells the story of loyal friends and feuding families, with hidden lovers twisted into the plot. A group of characters are forced from their homes, finding refuge in the Forest of Arden, a place where escapees can find community and acceptance. The musical features an original folk-pop score by Shaina Taub, and is adapted from William Shakespeare’s original text. The musical rejoices in the power of love and community, themes that are very much relevant today.

“(This rendition) made its premiere in New York as a part of a program called Public Works, where the Public Theater in New York performs free Shakespeare plays in Central Park in the summer,” Riverland director Lindsey Duoos Williams said.

“One of the things I love about it is that it makes Shakespeare stories just really accessible for people who might be a little intimidated by a full length Shakespeare play, who aren’t as comfortable with the language,” Williams said.

According to Williams, the Shakespearean comedy has a lot of heart, and highlights the importance of community and overcoming darkness by treating each other with respect.

“The message just seems that much more appropriate in this time when we’ve been so disconnected from one another, we haven’t been able to have those communal experiences for the last year of everyone gathering together in a theater ... we feel that missing in our lives,” Williams said. “So to have this show that’s all about the power of love and the power of community and to know that it will come back ... I just think it’s tremendously hopeful and reassuring right now.”

The musical had originally been scheduled for March 2020, but the cast was only one week into rehearsals when everything shut down, postponing the show to now.

This theater season has been difficult to plan, as theater is typically planned far in advance, a near impossible task this year. The first two weeks of rehearsal were on Zoom, at which point they felt it would be safest to record the production. As vaccinations became available, they felt they could bring small groups of people safely into the theater to rehearse under safety guidelines and to record.

Technical director John Deyo is in charge of the technical aspects of the production, including putting the final video together. He has been recording actors individually as they work through their part. It’s strange to not have any other factors on stage to act with.

“Sometimes we’ll have another actor out in the theater who can sit at a distance and read the lines with them so we get more of a flow to the dialogue, but mostly they have to know ‘OK, you look this direction and this person standing over here,’” Williams said.

Once the scenes are recorded, Deyo edits the actors together into the same scene. Williams said the process has been unique for both the directors and the actors. The experience has been a learning experience and an opportunity for students to flex their creative muscles.

This isn’t the first time the community college has put on a play during the pandemic. In the fall Riverland students performed “She Kills Monsters” live on Zoom. Every performance night, the actors would log in and with the help of a setting background would perform from their homes. While the play went well, a musical over Zoom would have been impossible, Williams noted. With varying internet speeds, the music and vocals would simply not match up. Now the actors’ vocals will be recorded and layered upon each other so it sounds like they are all singing together.

“I’m so in awe of our students and how resilient that they’ve been. When we did this live Zoom show they were willing to just give it a try and trust that it was going to work and it was really wonderful and now we’re trying something else new with them and they’ve just been totally committed and willing to go with it,” Williams said.

The cast and crew is looking forward to getting back to live theater and acting one day, but for now they are happy they can provide some entertainment. Williams noted that although the situation isn’t ideal, students are learning how to act in front of a camera, which she said is different from acting in front of an audience.

To purchase tickets to the Riverland show visit riverland.edu/tickets.

If you are interested in more theater experiences, the Little Theater of Owatonna will be hosting “The Gin Game” April 23, 24, 25 and 30 as well as May 1 and 2. Those interested in tickets can get some at littletheatreofowatonna.org/buy-tickets/.