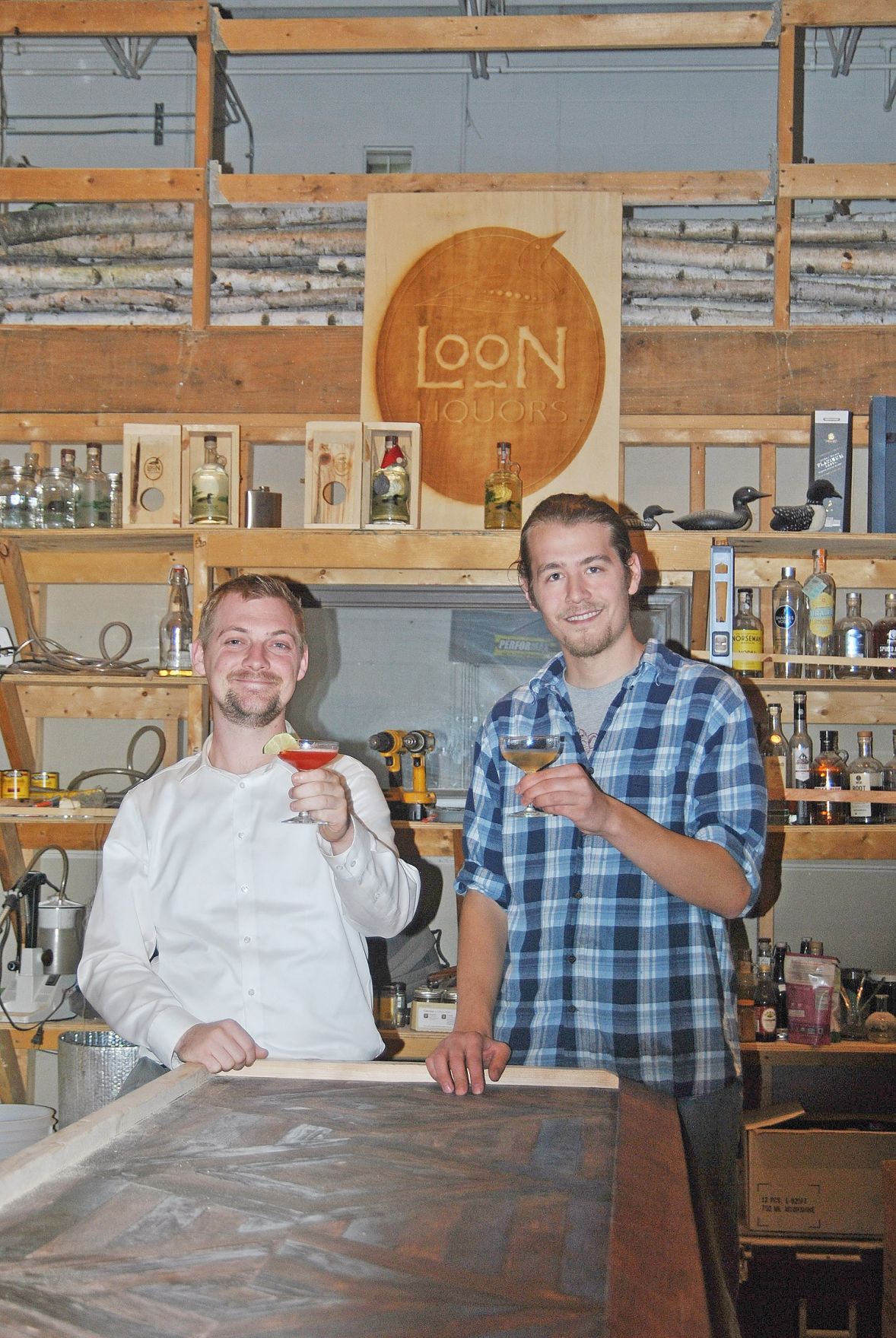 With the recent approval from the Northfield City Council, the Northfield-based Loon Liquors is set to open a cocktail room in its current location within the coming weeks. 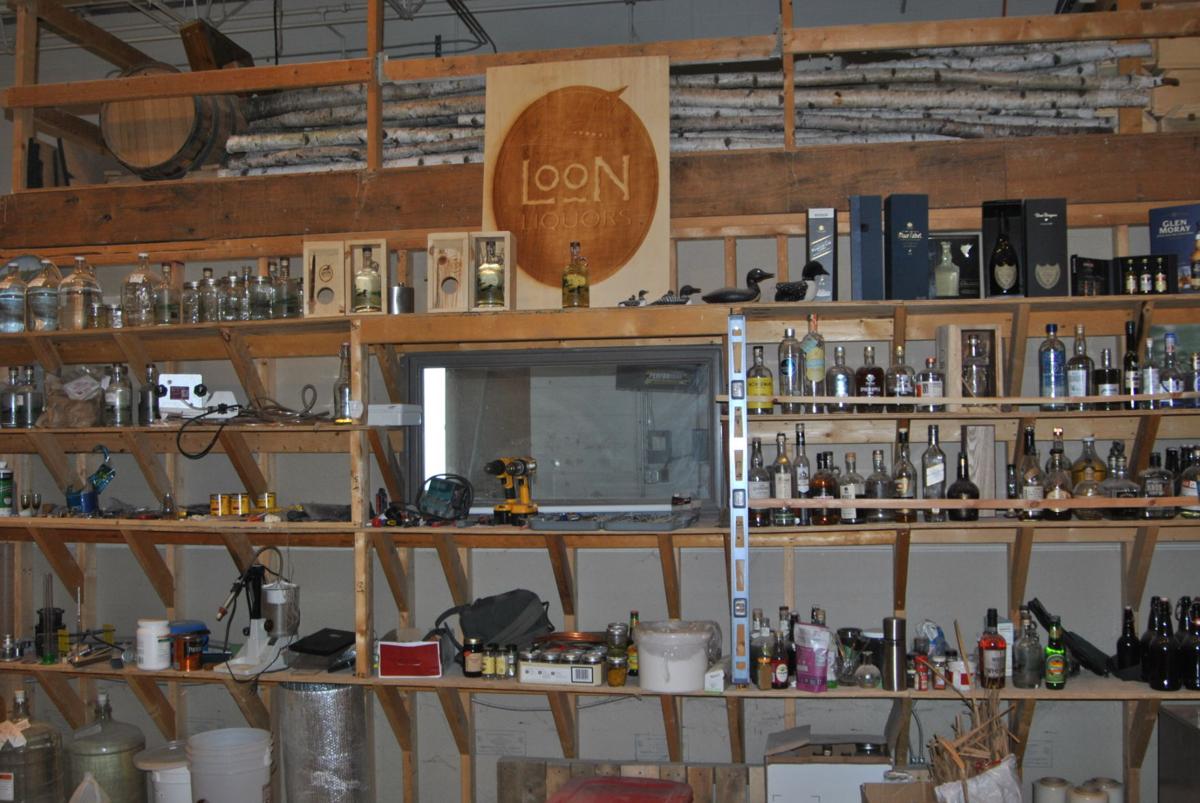 The "research and development" wall inside Loon Liquors. 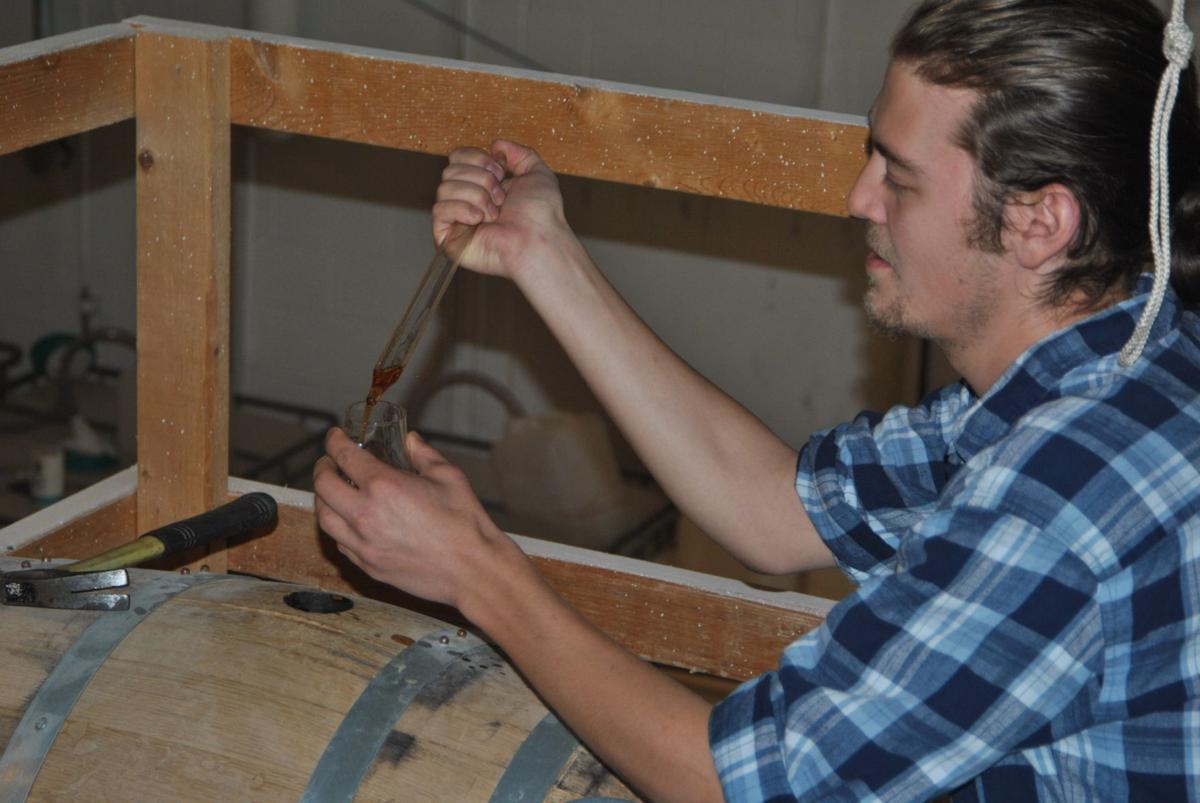 Rossi, co-founder of Loon Liquors, takes a sample out of a barrel that contains aged Loonshine, a product not yet on the market. 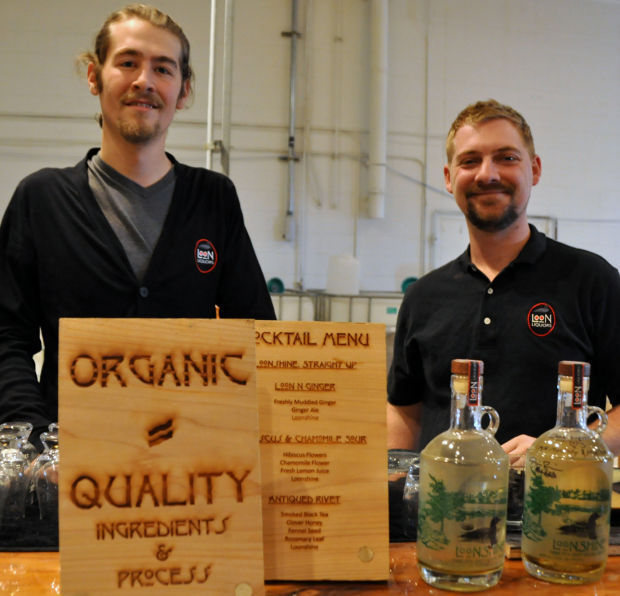 Burns Night will be celebrated on Jan. 22 at Loon liquors in Northfield. Founders Simeon Ross and Mark Schiller say the night will feature a four-course dinner with Loon cocktail pairings, Celtic music by Laura MacKenzie and Ross Sutter and the opportunity to try some haggis. (News file photo) 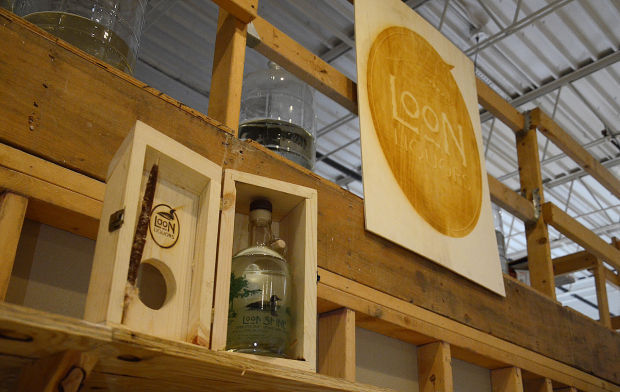 A select amount of Loon Liquors whiskey will come enclosed in a wood duck house with a cattail. (Nick Gerhardt/Northfield News) 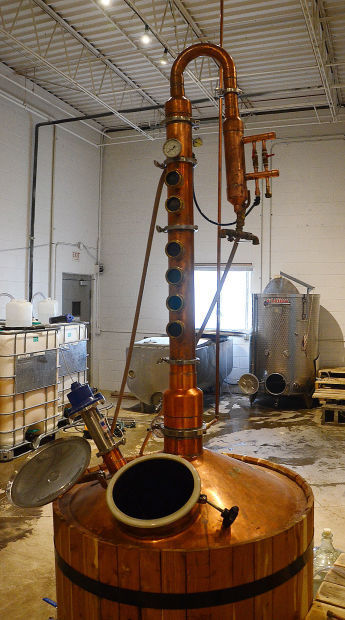 Loon Liquors uses this still to produce its whiskey. 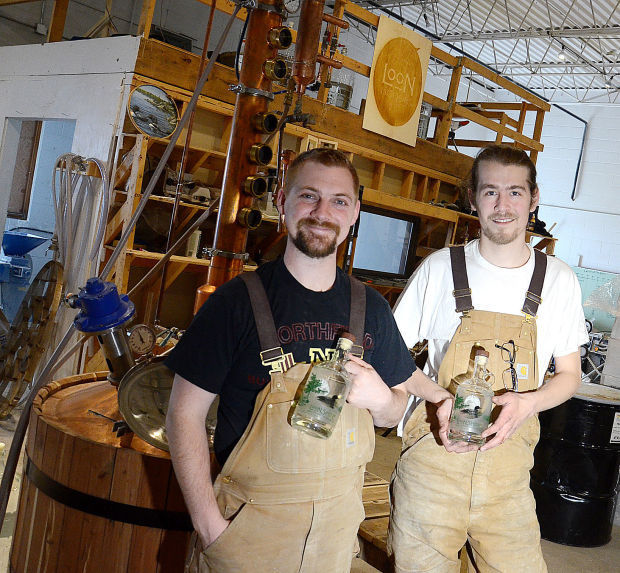 Loon Liquors will sell its whiskey in 750 mL jugs like this for $35.

With the recent approval from the Northfield City Council, the Northfield-based Loon Liquors is set to open a cocktail room in its current location within the coming weeks.

The "research and development" wall inside Loon Liquors.

Rossi, co-founder of Loon Liquors, takes a sample out of a barrel that contains aged Loonshine, a product not yet on the market.

Burns Night will be celebrated on Jan. 22 at Loon liquors in Northfield. Founders Simeon Ross and Mark Schiller say the night will feature a four-course dinner with Loon cocktail pairings, Celtic music by Laura MacKenzie and Ross Sutter and the opportunity to try some haggis. (News file photo)

A select amount of Loon Liquors whiskey will come enclosed in a wood duck house with a cattail. (Nick Gerhardt/Northfield News)

Loon Liquors uses this still to produce its whiskey.

With the recent approval from the Northfield City Council, the Northfield-based Loon Liquors is set to open a cocktail room in its current location, 1325 Armstrong Road, Suite 165, Northfield, this month.

They’re aiming to open a casual, fine drinking establishment that brings in a crowd of folks who enjoy sipping a nice cocktail, or even a craft ginger ale.

They described the soon-to-be cocktail room as “lively, but not dancing crazy, and definitely up beat.”

And they encourage folks to bring in their board games.

Though the company has a year under its belt in distilling its first product, Loonshine - an organic whiskey from locally sourced ingredients - the next step is going to allow the company to take things in stride as they look to produce additional spirits.

“The whole project is a mix of a hobby, an MBA and a gym membership,” said co-founder Mark Schiller, who said it was hard to envision where their dream would take them. “I would never take any of the learning back.”

Schiller and his longtime friend and Loon Liquors co-founder Simeon Rossi (affectionately known as "The Loonshine Guys" in Northfield) began their quest to offer an “authentic” product in 2011. Producing an organic product wasn’t initially a must, but as they began the endeavor, they found it would only enhance the quality.

It was Rossi’s homemade liqueur that sparked the thought, as he crafted a coffee liqueur for White Russians. They turned out to be a big-time hit. Following a get together, the White Russians continued to get praise and Schiller made a call to see if Rossi would want to take the next step, producing larger quantities.

But it wouldn't be that easy.

When Schiller met with state officials, he found that it would not be a cheap task, either.

But that all changed later that year with the passage of the “Surly Bill.” The thought of producing a product became a reality — a much cheaper reality. The bill lowered the manufacturing price from $30,000 per year to $1,100 per year if less than 20,000 gallons were produced.

But by then, the thought of a making the coffee liqueur had faded, and it resulted in the company’s first product to hit the shelves: Loonshine. It came from a number of generous donations through  a micro-funding campaign, which topped $11,000.

Those donors now can find their names on the wall inside Loon Liquors, laser-engraved on wood slabs, to remind the co-founders how fortunate they are to have their support.

The wheat- and barley-based white whiskey, which won the silver medal in the light whiskey category at the Washington Cup Spirits Competition and runs about $35 a bottle, can now be found in over 100 liquor stores in Minnesota.

When the two began looking into a product to launch, they said the demand for a quality whiskey was off the charts, but as they look to future products, they want to make sure and produce yet another product that is different than others.

And to ensure the separation, the two described the main wall in its facility as the “research and development wall,” as it holds 50-plus bottles of liquors produced by their competitors.

“You have to know what they’re making,” Rossi laughed.

The process from start to finish takes roughly a month and is similar, yet different, to how the Russians distill their vodka. Rossi said they filter it with birch charcoal, from birch they harvested in Northern Minnesota. The product then rests on oak staves – what wooden barrels are made of – for fast extraction.

And now that the two Northfield High School graduates feel “confident” in their whiskey, they’ll look to dabble with aged spirits, different liqueurs and complementary products.

However, the aged spirits require time, space and money, as the capital sits in oak barrels.

(The aged Loonshine, which has yet to hit the market, received this writer’s vote for “best product,” though both the Metropologin and Loonshine were something you’d expect out of a $100 bottle.)

The next product to launch, Metropologin, is one they hoped to unveil earlier, but has continued to be worked on by the soon-to-be head distiller, Rossi.

The two hope to feature the product with the opening of the cocktail room. Recent talks with folks at the Northfield Historical Society have also included Goodbye Robber Rye, a cherrywood rye whiskey, which they hope to have mastered in time for the 2016 Defeat of Jesse James Days celebration.

With the constant research and development, Rossi believes the cocktail room, or what he calls a “cocktail laboratory,” will allow him to look at even more products, both alcoholic and non-alcoholic.

The growth thus far has not been done without support, they confessed, and they don’t plan to end the relationships anytime soon. In fact, those relationships are a core value of the company, starting at the wheat and barley.

The local relationship also results in a cool story, one Rossi plans to share with customers when they arrive at the cocktail room.

The two bring in their base product from a local farmer, and when they’re done with the grain, the farmer takes the grain back and feeds his hogs and cattle. That meat ends up going to St. Olaf and Carleton College, they said, creating a full circle.

“They’re not only supporting us,” Rossi said. “They’re supporting the farmer down the road.”

It also allows the company to continue its mission: a zero-waste operation. And with local product coming from local soil, Rossi believes it’s reflected in the product.

“You can taste that Rice County soil,” he laughed.

Now that the business is on batch 14, each of which produces 400 bottles, they’re looking forward to the face-to-face feedback, which they’ll get in the form of a 50-seat cocktail room.

And if their research speaks any truth, it won’t just be locals visiting.

“They definitely bring in the out-of-towners,” said Schiller, referring to the recent trend of people traveling for brew pubs. In Ireland, Schiller saw the distillery tourists firsthand, where the still was centralized to bring people into town.

“There are so many complementary businesses, too,” he added

Both Rossi and Schiller believe the complementary business aspect will be evident in Northfield, especially considering they plan to encourage patrons to bring, or order in, local food.

“The liquor is just the foundation,” Schiller said of distilleries. “A lot of other products and services will benefit.”

That includes merchandise, which they said has and will continue to form partnerships throughout town.

Northfield Area Chamber of Commerce Executive Director Todd Bornhauser believes Southern Minnesota’s first cocktail room will bring a crowd that will have a bigger impact on Northfield than the business itself. He said the production and experience of a cocktail room is a growing niche that Northfield will now benefit from.

“If we can bring that experience and bring people to shop and come to Northfield,” he said. “It’ll have that ripple effect throughout the community.”

Schiller said they have heard from several community members who have urged the business to move downtown, and it has been thought about, he admits, but just like their product, they want to make sure it’s done right.

So for now, the two will look to put some finishing touches on the cocktail room tucked in Northfield’s industrial district and look forward to continuing to “master” its product.

“[We] create a product that no one else has ... We’re sort of redefining it, and we’re being recognized for that,” said Rossi, who wants to continue down that path. “We don’t need to rework the wheel, but perhaps the wheel could be better built.”

And if Loonshine is any testament, that wheel is now spinning better than ever.

Brad Phenow covers government and economic development in Northfield, and public safety in Faribault. Reach him at bphenow@faribault.com, bphenow@northfieldnews.com or follow him on Twitter @BradPhenow.