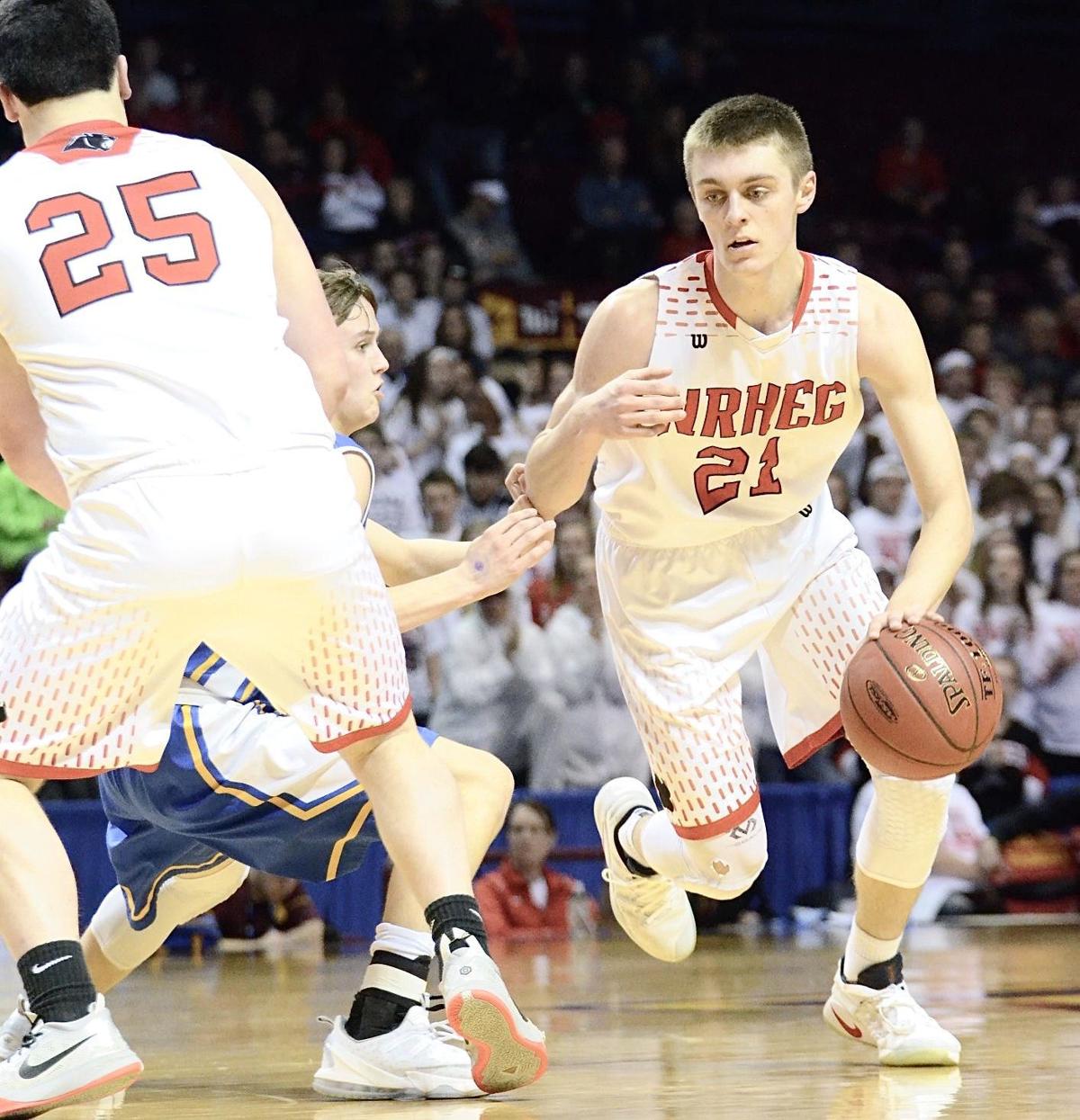 Former People’s Press Player of the Year and NRHEG guard Oakley Baker led the Panthers to a 2-1 record at the state tournament during his senior season. He scored 40 points in his final game to surpass 2,000 for his career. (Jon Weisbrod/People’s Press, file) 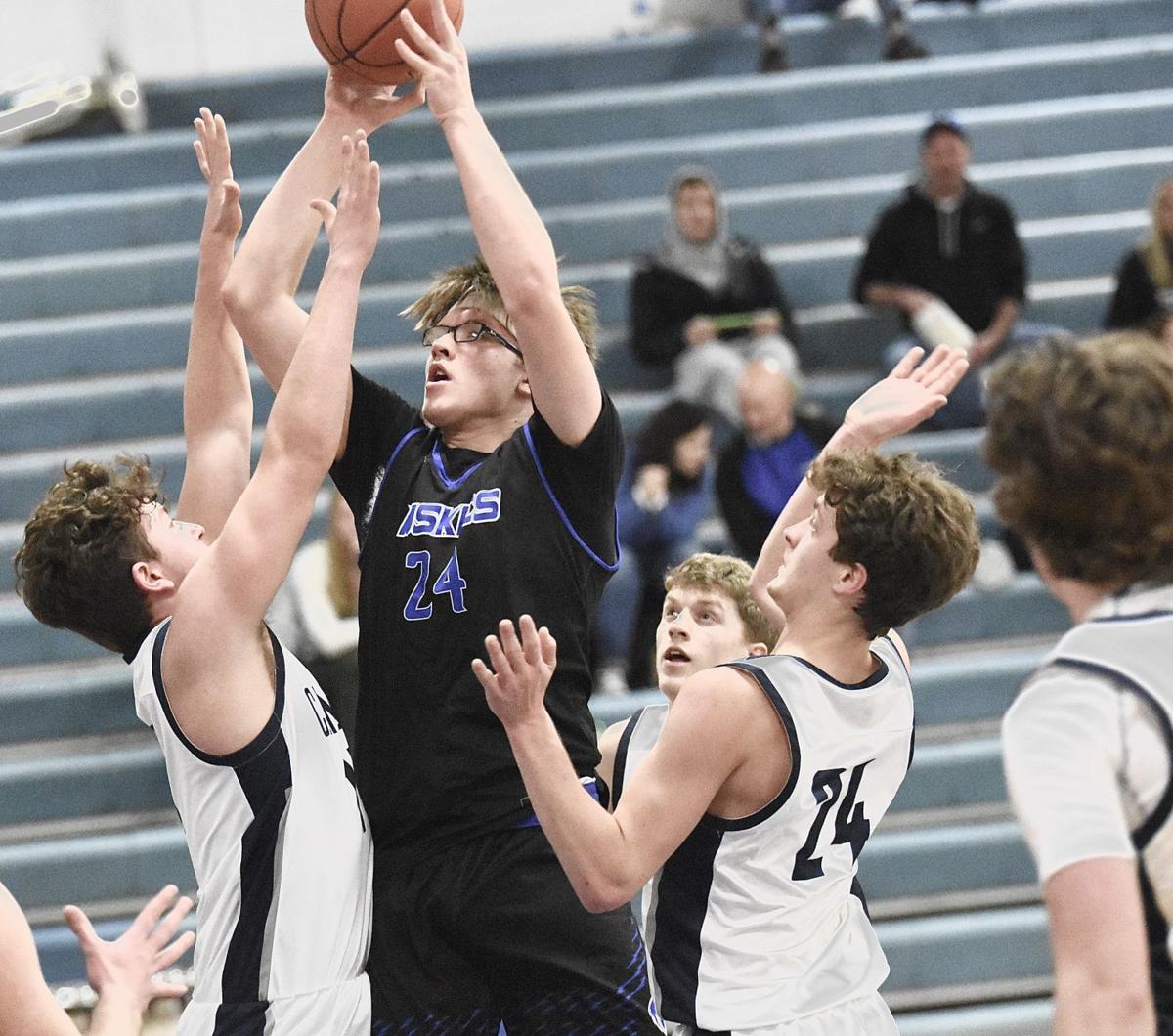 Only a sophomore, Evan Dushek (24) was literally three rebounds shy of finishing the 2019-20 season averaging a double-double. (Jon Weisbrod/People’s Press)

Former People’s Press Player of the Year and NRHEG guard Oakley Baker led the Panthers to a 2-1 record at the state tournament during his senior season. He scored 40 points in his final game to surpass 2,000 for his career. (Jon Weisbrod/People’s Press, file)

Only a sophomore, Evan Dushek (24) was literally three rebounds shy of finishing the 2019-20 season averaging a double-double. (Jon Weisbrod/People’s Press)

In the week since the entire sports world went dark, just about every local, regional and national media outlet has supplemented their non-existent event coverage by cranking out some version of hypothetical content that includes — but is not limited to — tournament simulations, "best-of" lists, poll breakdowns and retrospective pieces.

Considering that I have yet to construct a proprietary algorithm that can predict, say, the Class A boys basketball state tournament, I suppose I’ll have to stick to the remaining story concepts until I crack the code and have some type of major breakthrough. However, I wouldn't hold my breath when it comes to my ability to create a solid high school basketball simulation formula. I majored in communications, not mathematics.

Even before the COVID-19 outbreak, my plan was to devise the all-area boys and girls basketball teams, and as I’ve started gathering stats and information, I’ve found myself reflecting on some of the top individual talent that's passed through the area since I began at the Owatonna People’s Press in late 2012.

I can recall my first Player of the Year feature on Owatonna junior guard Ty Sullivan and distinctly recall sitting down and talking with him and his dad Greg about his tireless training regimen and intense dedication to the sport. At that point, basketball and football were both distinct possibilities at the next level for the ultra-talented three-sport star and OHS coach Josh Williams said as much way back then.

Sullivan eventually emerged as a scholarship-level football player before a horrific knee injury in the state championship game during his senior season all-but halted the recruiting process. He did, however, end up committing to Division II powerhouse Minnesota-Duluth — and though he never returned to his old form as a game-changing defensive back — Sullivan remained with the Bulldogs for his entire four years of eligibility and was named a team-captain as a senior.

And that’s just one of many memories that have bubbled to the surface, especially after I spent an hour sifting through the online archives. Reading Sullivan’s Player of the Year feature was the proverbial jump into the online rabbit hole we all find ourselves in from time to time.

Once I emerged, though, an idea popped into my head: Why not construct some type of Super All-Area Team consisting of the top players that took the floor between 2012 and 2020. That’s eight full seasons of games and seven completed all-area lists to choose from.

Needing to fill only five slots, the idea quickly materialized and before I knew it, I had my final list, complete with stats and career accomplishments.

So, without further delay, below are the top five basketball players — in no particular order — that I have covered in the Owatonna area since 2012. Oh, and I realize there's a pair of current student-athletes on the list and, yes, one of them will obviously be the 2019-20 Player of the Year, I honestly just haven't decided which one at this point. So don't read too much into what I've expressed about either one.

Why Sullivan? Though he is the player with the lowest scoring average on this list, he might just be the most athletically-gifted. Sure, this pick is borne from the tantalizing unknown of what his senior season could have been on the hardwood had he not gotten injured, but Sullivan was in the gym the night I covered my first Owatonna High School athletic event, and he immediately stood out. That’s hard to forget. He is perhaps the best rebounding backcourt player I have seen in eight years in this area and could guard three positions without hesitation. Check that, he could completely lock-down three positions without hesitation.

Where is he now? As mentioned, Sullivan went on to play football at Division II Minnesota-Duluth and is an avid outdoorsman and is involved in competitive fitness.

Why Rumpza? Numbers, that’s why. When it comes to raw statistical data, there isn’t a boys basketball player since 2012 that can challenge Rumpza’s final production during his senior season. Playing in the Gopher Conference that mainly houses Class A and small Class AA programs, he was a walking mismatch based on his legitimate 6-foot-6 frame and smooth shooting ability. I always thought that he would have made a heckuva college basketball player (he turned down multiple Division II offers), but he decided to choose a different path.

Where is he now? Rumpza graduated from BPHS as the program’s all-time leading scorer and rebounder, but accepted a scholarship to play football at Division II Winona State University. He red-shirted his first year on campus and spent the next four seasons as a super-skilled and towering backup, completing 52 of 94 career passes for 758 yards and six touchdowns. As a senior, he stitched-together consecutive games against Augustana and Concordia-St. Paul in which he combined to complete 32 of 53 passes for 354 yards and two touchdowns.

Why Baker? Since being touted as one of the region’s top young freshman way back in 2013-14, I began tracking Baker at an early age and watched as he steadily improved every season before peaking as a senior and guiding the Panthers to a Class AA state consolation championship. In his final career game against Lake City, he dropped 40 points and just barely snuck into the ultra-rare career 2,000-point club after his unforgettable effort. Similar to Rumpza, there were few players in the Gopher Conference that could guard Baker one-on-one as he played with the skill of a 5-10 guard trapped in a 6-foot-5, 175-pound frame. What made him especially deadly was his 3-point shooting ability — no former OPP Player of the Year finished with a better percentage from downtown — and accuracy at the line. As as senior, he established new MSHSL state tournament record for most consecutive free throws made, ending a perfect 21-for-21 from the stripe in three games, two of which the Panthers won.

Where is he now? Despite drawing a lot of interest from the scholarship level, Baker decided to take his game to Division III St. John’s University in Collegeville, and it appears as though he made the right decision. Baker was an integral part of the 2019-20 Johnnies team that emerged as a legitimate national title contender before the D-III tournament was cancelled after two rounds just prior to SJU’s Sweet 16 showdown against rival St. Thomas. During his junior season, Baker started all 29 games for the No. 2-ranked Johnnies and averaged 9.9 points, 2.4 assists and 2.3 rebounds per game while shooting 87% from the line and 41% from deep.

Why Hagen? You would be hard-pressed to find a better pure teammate than the super-strong, super-athletic 6-4, 250-pound point-forward. Playing in a conference in which he could have easily scored 20 points per game despite seeing regular double and triple-teams, Hagen instead made a conscious effort to elevate the play of his teammates and led the Blossoms assists as a junior and senior, peaking at 4.5 per-game this past winter. However, if the situation called for him to ring up huge scoring numbers, he didn’t hesitate, demonstrated by his 23-point effort in a 22-minute span against Hayfield in the section championship game. He was the centerpiece of a 2019-20 Blooming Prairie team that broke a 54-year drought of qualifying for the state tournament. Oh, and take a look at that shooting percentage. Wow.

What’s next? Before he strapped on his high-tops, Hagen dominated on the gridiron as an impossible-to-cover receiver and game-changing defensive end for the state champion Blossoms football team this past fall. He runs an unfair 4.65-second 40-yard dash and accepted a scholarship to play at Division II powerhouse Minnesota State in Mankato.

Why Dushek? It took exactly one year for Dushek to evolve from a promising young freshman to perhaps the most dominant post player in the Big Nine Conference. Had he pulled down just three more rebounds in his final game against Lakeville South, Dushek would have averaged a double-double — and it's been a while since that's occurred at OHS. His throw-back style has been a treat to watch, and his rafter-scrapping old-school fade-away jumper is a thing of beauty. Nothing but net.

What’s next? Dushek is unquestionably a scholarship-level player — he finished with 21 points, seven rebounds and five blocks against Lakeville South’s 6-9, 300-pound Riley Mahlman — and it’s only a matter of where he fits within that spectrum.