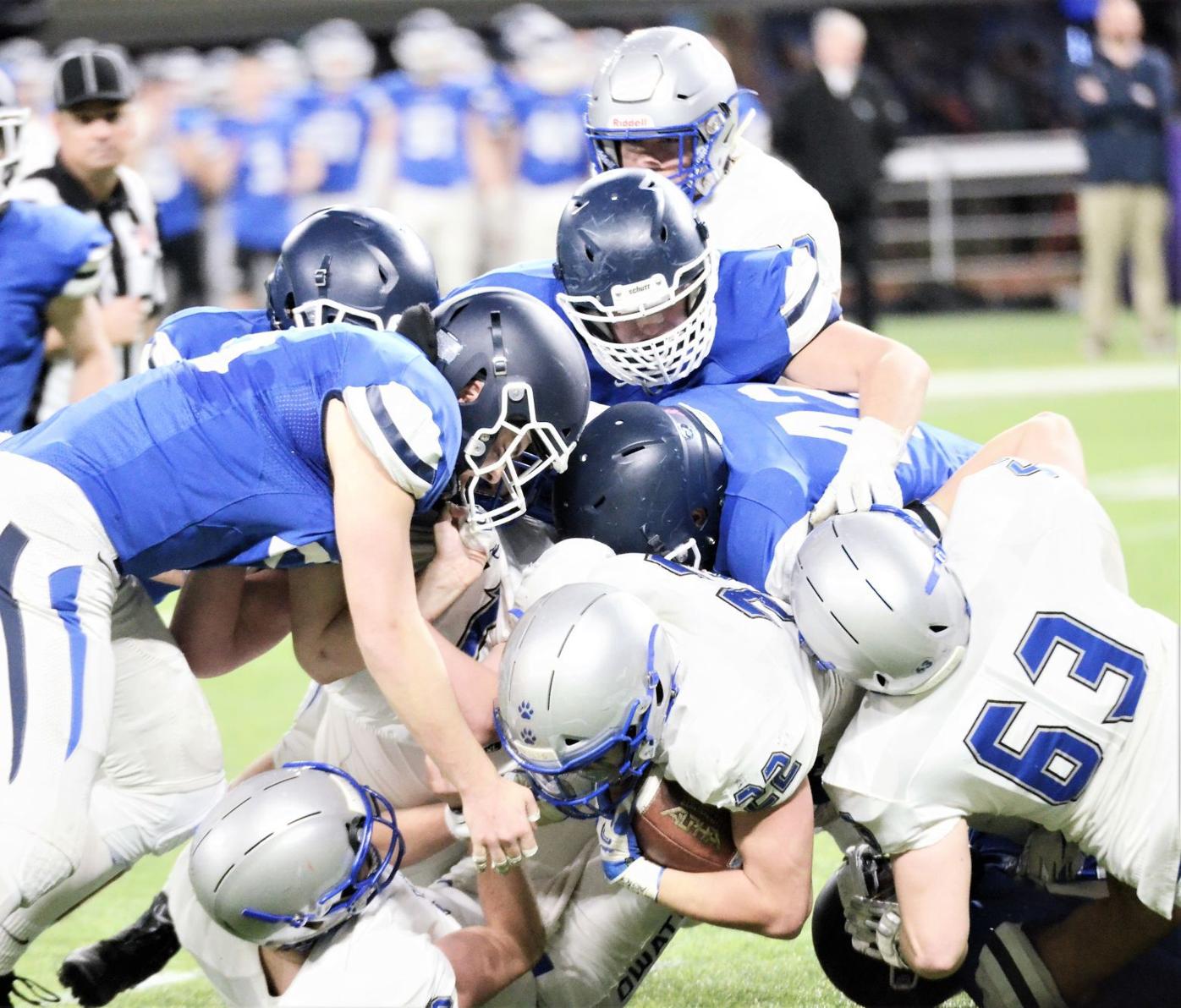 The St. Thomas Academy defense, seen here against Owatonna during last season’s state championship game in Minneapolis, is tops in all of Class 5A in shutouts (5) and points allowed per game (5.7). (Jon Weisbrod/People’s Press) 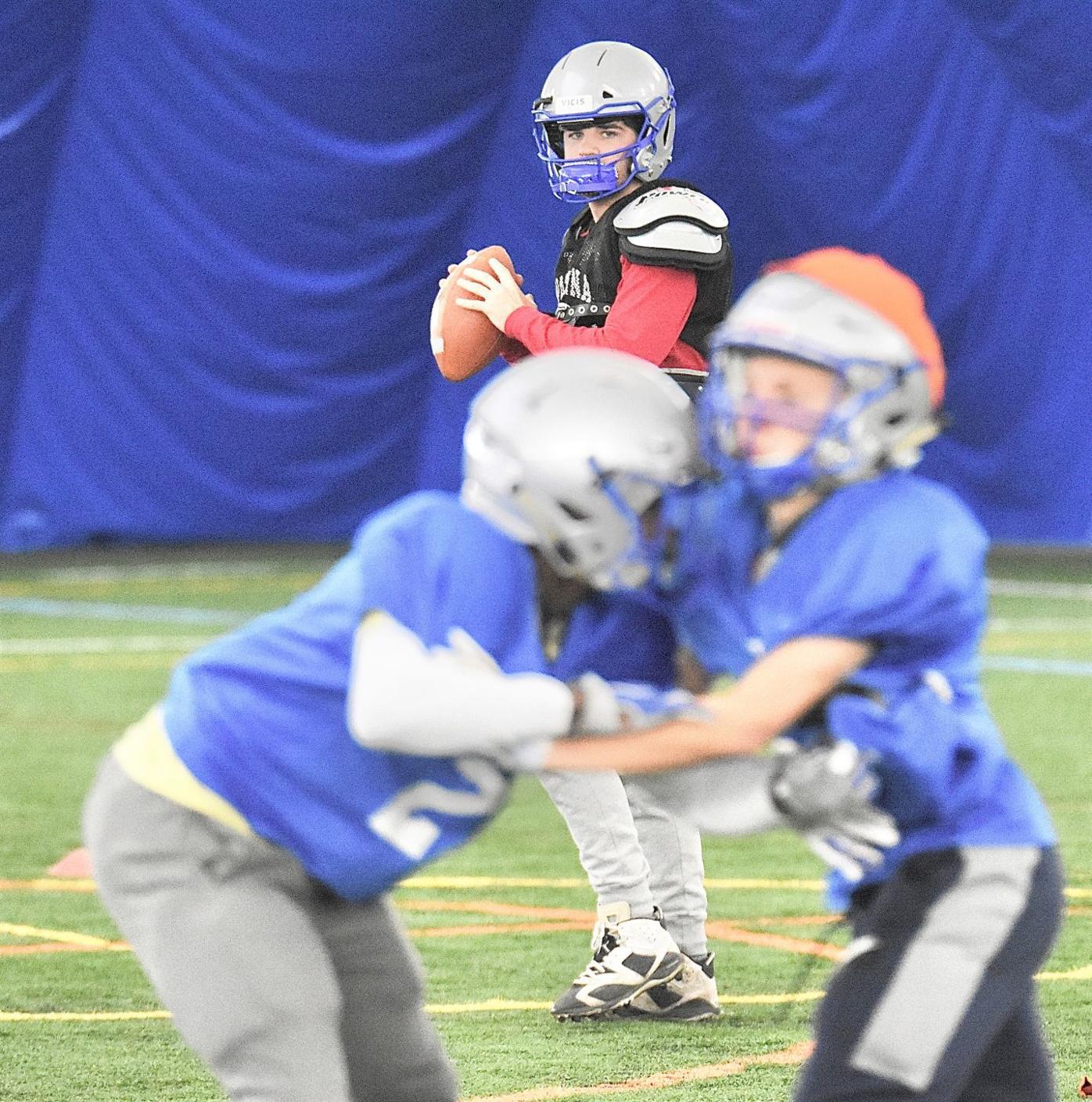 The St. Thomas Academy defense, seen here against Owatonna during last season’s state championship game in Minneapolis, is tops in all of Class 5A in shutouts (5) and points allowed per game (5.7). (Jon Weisbrod/People’s Press)

Yes, there is a boatload of intrigue when it comes to Saturday’s Class 5A state quarterfinal contest between No. 1-ranked Owatonna and No. 7 St. Thomas Academy.

It’s a contest between a pair of teams that met in last season’s state championship game and a matchup that will draw a lot of eyeballs throughout the state for a variety of reasons. Both teams are tough, physical, talented and boast strong traditions.

Call it a marquee matchup, a super showdown or a big-time battle.

Just don’t call it a rematch.

“Everybody graduates so much, it’s just the way high school football is,” Owatonna coach Jeff Williams said after practice on Wednesday night in Dundas. “They have some returners and we have some returners but our kids are a year older and so are there’s. Both teams also have some new kids in the mix at key spots, so for people who only pay attention at this time of the year, it’s a big state championship rematch, but right now we feel it is a just pretty good football team against another pretty good football team. To me, I guess the narrative is just two really strong, hard-running, opportune passing teams that both have big goals.”

Bottom line, the schools are the same, but the teams are very different.

Despite the obvious turnover, both programs have sustained a high level of play throughout the 2019 campaign. The Cadets rolled through the first seven weeks of the regular season — pitching an eye-popping four shutouts in the span while out-scoring their opponents by an average score of 38-4 — before suffering a somewhat unexpected 20-0 loss to Chaska in Week 8.

St. Thomas, though, wasn’t down for long and quickly picked up where they left off in Week 7, rocketing past Park of Cottage Grove and Apple Valley by a combined score of 76-7 en route to its second consecutive Section 3-5A championship.

Though the offense has proven to be super-productive, averaging 34 points per game, the Cadets have bullied their way to a 9-1 record leaning on a defense that leads all of Class 5A in total shutouts (5) and points allowed per game (5.7).

Similar to the Huskies, St. Thomas attacks with an aggressive man-to-man scheme intent on stopping the run and penetrating the offensive backfield with a huge and disruptive defensive line. The Cadets rotate a number of bodies up front, including Oscar Berg (6-1, 215), Garrison Solliday (6-0, 215), Matt Boland (6-2, 240) and John Herzog (6-3, 220) and retain all-state-caliber linebacker Ben Reppenhagen (6-4, 227).

Reppenhagen — who has drawn serious interest from a number of Ivy League schools — has racked up 56 tackles, nine tackles-for-loss and 3.5 sacks to go with one forced fumble and one interception. Solliday, another returning starter, is third on the team in tackles (43) and tops in TFLs (14) and sacks (4).

On the outside, Yenika Fondungallah, Mitch MacDonald and Patrick O’Keefe are sticky in coverage and do a great job of cleaning up anything that might reach their area of the field.

“Their linemen are very aggressive and quick off the ball,” Williams said. “They are low and they get into your offensive linemen and they are just tough in their man coverages as well. It’s pretty lock-down. It’s going to be a lot of work for us to find seams or chinks in their armor and get the ball into their secondary because their coverage is very, very good.”

On the other side of the ball, the Cadets entered the season needing to replace an all-state running back (Brendan McFadden) and all-district quarterback (Charlie Fafinski), and did so with Danny McFadden (5-9, 165) and Baker Reding (6-0, 175), respectively.

Danny McFadden, the younger brother of Brendan, gobbled up a season-high 232 yards on 25 carries against Apple Valley in last week’s section championship game and isn’t as physically-imposing as his older brother, but boasts the same elite vision and appears a tad faster on tape. In the win against the Eagles, he showed his top-end speed with a 94-yard touchdown gallop that gave his team the lead in the second quarter. For the season, he has 1,284 yards and 19 touchdowns.

With the Cadets clearly at their best when they are controlling the clock on the ground with their powerful I-Formation offense, Reding has been asked to do little more than manage the game. During the regular season, he completed just 35 of 98 passes for 553 yards to go with just two touchdowns and three interceptions.

Despite hauling in only six passes — all of which came in the regular season — receiver Joe Deyak committed to Division I North Dakota State University on Oct. 23 and is a big play waiting to happen. The senior is an athlete who can take the top off the defense with elite speed (4.5 seconds in the 40-yard dash) and can also out-jump a defender as he possesses an excellent vertical while standing 6-foot-3 and weighing almost 200 pounds. If the Cadets start gaining traction on the ground and the OHS secondary begins sniffing in the backfield, Deyak has the ability to transform the game in the blink of an eye.

The St. Thomas offensive line is headlined by massive returning starter, Tommy Brandt (6-6, 274), but it’s unclear whether the Kansas University commit will play on Saturday as he’s missed a handful of games toward the end of the season due to injury, including the section final against Apple Valley.

Even without Brandt, the Cadets are tall, bulky and strong up front as the five linemen who started against the Eagles last week average 6-feet-3 and 236 pounds. They have opened holes for a stable of runners that have averaged 236 rushing yards per game and accumulated 48 touchdowns on the ground.

The battle in the trenches will undoubtedly be one to keep an eye on as the Huskies’ three starting defensive linemen (Ethan Rohman, Carter DeBus, Josh O’Daffer) and two middle linebackers (Carson DeKam, Isaac Gefre) average 6-foot-1 and 226 pounds. The Owatonna starting defense has yielded just one rushing touchdown all season in roughly 30 total quarters of action.

Owatonna has allowed one or fewer touchdowns in seven of its 10 games and trails only St. Thomas Academy in points allowed per game at 7.4.

Offensively, the Huskies found a decent measure of success through the air in the section tournament — averaging 208 passing yards — and will likely need to air it out early and often against the stubborn and stone-walling Cadets’ rush defense.

Brayden Truelson has completed 21 of 31 passes for 408 yards and six touchdowns in the last two games and surpassed 1,485 yards and 18 touchdowns for the season.

Temperatures are expected to hover just above freezing at kickoff and dip below 30 as the evening progresses. There is a 20% chance of precipitation and winds will come out of the northwest at 10 MPH. For the final time, dress warm.

1. A numbers game: With an enrollment of more than 900 students, St. Thomas Academy is able to construct a Class 5A football program choosing from roughly same a depth of students as a Class 6A school, and that’s because the entire student body is made up of boys. Owatonna, on the other hand, has between 600 and 650 male students to choose from as its co-ed enrollment is listed at 1,328 on the MSHSL web site.

2. Stunning defensive stats: The Huskies and the Cadets have combined to play 20 games and pitched a collective nine shutouts. Just three teams — Hastings, Chaska and Mankato West — have scored more than two touchdowns against the two defensive powerhouses while 16 combined opponents have tallied one or fewer touchdowns. The teams have combined to allow just 13.1 points-per-game and have been nearly impossible to run against.

3. Something happened in Chaska: After rising to No. 2 in the state and doing so with seven lop-sided wins, the Cadets suffered a rather abrupt 20-0 loss to Chaska in Week 8. According to the St. Paul Pioneer Press, St. Thomas allowed a 17-play, 90-yard drive and was out-gained 156-32 in total yardage in the first half. For the game, the Cadets gained just four first downs and finished with less than 80 yards of total offense.

4. A look at the schedule: In Weeks 2-7, the Cadets plays six opponents that finished the regular season with a combined 14-34 overall record. One of those games was against winless Henry Sibley while another was against a struggling Class 4A team, Hill Murray. It should be noted, though, that St. Thomas Academy defeated eventual Section 4-5A champion Mahtomedi, 38-0, on Friday, Sept. 13. The Cadets also defeated Section 7-5A winner Coon Rapids, 34-0, in Week 1.