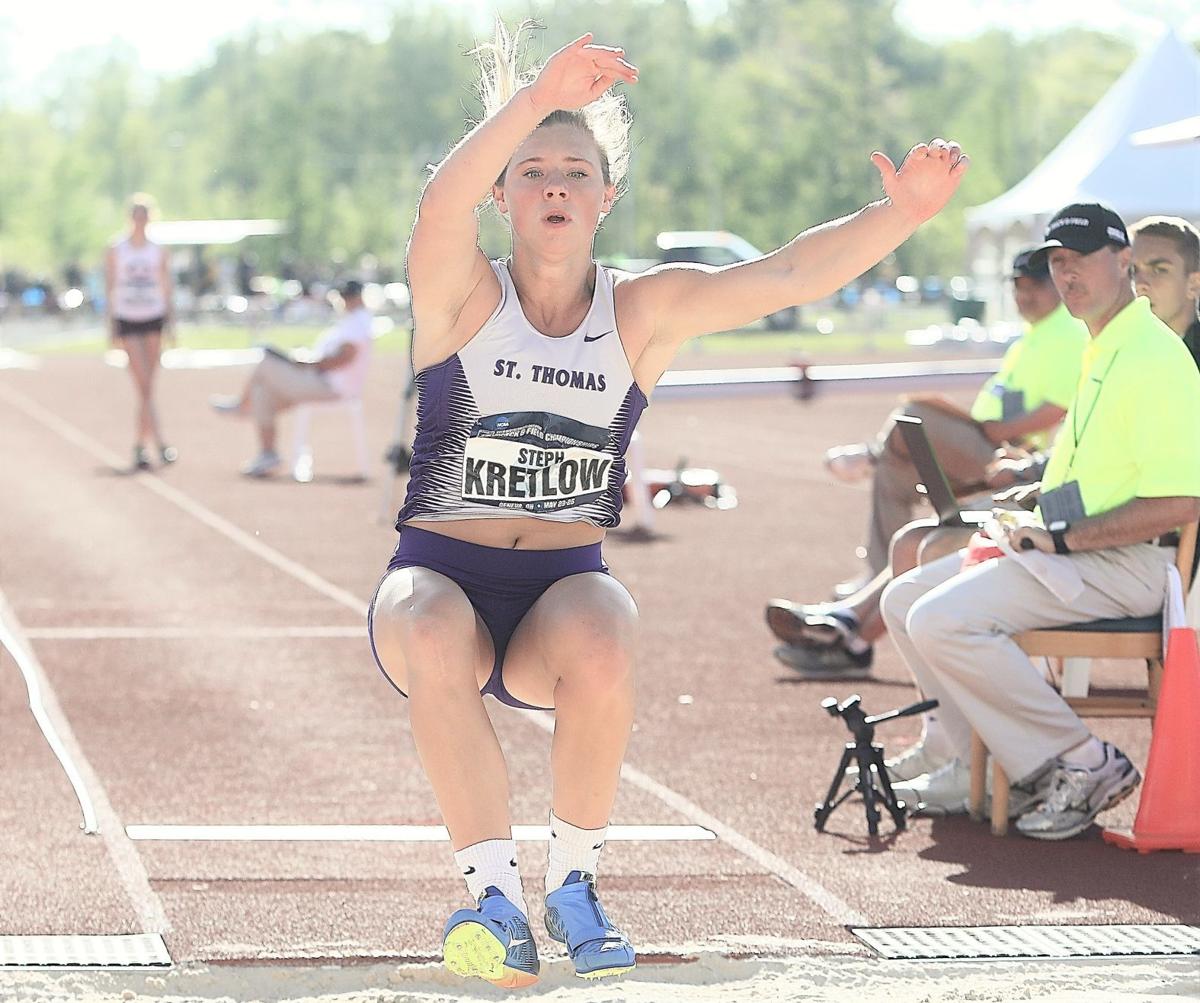 Owatonna-native Steph Kretlow, pictured here at the 2019 national outdoor meet, was 1,300 miles from home and less than 24 hours shy from competing in the NCAA Division III National Track and Field Indoor Championships when word came down that all athletic competition had been abruptly halted last Friday, March 13. (Photo courtesy of the University of St. Thomas) 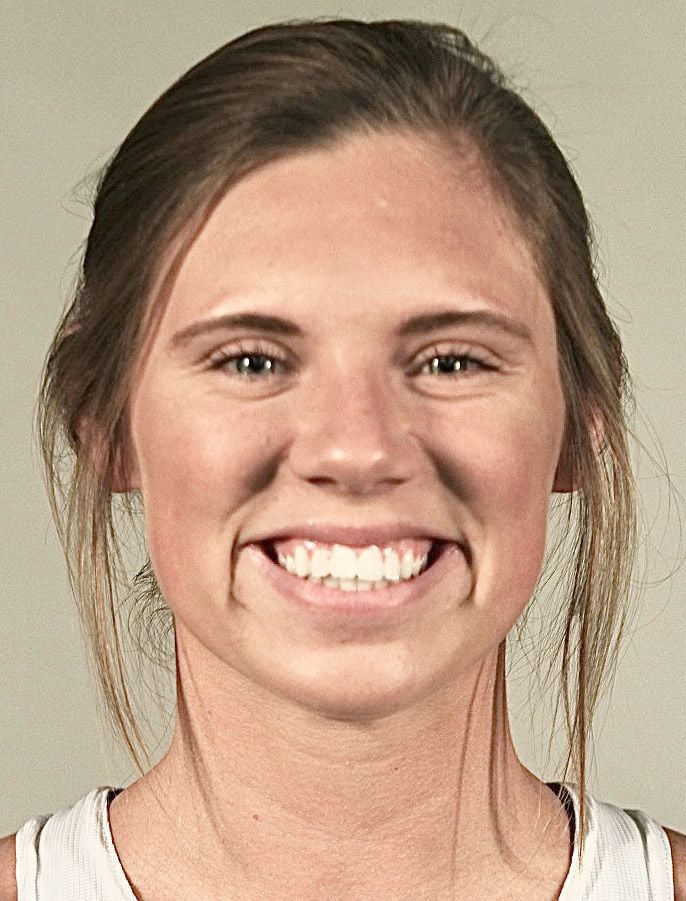 EDITOR’S NOTE: This is the third installment in a multi-part series of articles that has delved into how local college athletes have dealt with the COVID-19 pandemic and how it has affected their lives both on and off the field.

More than 1,000 miles from home and still trying to comprehend the increasingly perilous atmosphere sweeping the nation due to the COVID-19 outbreak, Steph Kretlow waited at the gate as her parents descended into Douglas International Airport last Thursday.

There was a lot swirling through Kretlow’s mind as the nation found itself dealing with the early stages of the worst global pandemic in more than a century, but during those agonizing moments, all she could think about was what she was going to tell her parents.

It had only been a few hours since the NCAA had declared that all spectators would be banned from attending the Division III National Indoor Track and Field Championships, and Matthew and Arla Kretlow — on their way from Owatonna to support their daughter — were clueless to the bombshell announcement as their flight pierced through the clouds and made its way toward Charlotte, N.C.

What was Steph going to say? How was she going to break the news? There were no answers to these impossible questions, and when the moment finally came and she found herself standing face-to-face with her parents, there wasn’t an easy way to bring it up.

So she just had to be honest.

“We just stayed at the gate and I basically told them I don’t know what you want to do, but you might want to turn back and go home right now,” Kretlow said over the phone on Wednesday afternoon. “There wasn’t much else to say, so they hopped on a plane and headed back to Minnesota.”

At the time, Kretlow believed confronting her parents was going to be the most difficult part as a results of the chaotic situation brewing in the United States. In reality, she still had a huge meet coming up and at she could at least pour herself into preparation for that to temporarily take her mind off everything.

Her world, though, was about to get tipped upside down.

Unable to avoid the constantly-evolving and increasingly dire news surrounding the outbreak, Kretlow returned to the hotel and was instantly struck by a heavy and foreboding tone. With dozens of athletes from all over the country attempting to process the rising flood of news while trying to remain focused on the competition set to begin the next day on Friday, March 13, an unmistakably dark tone laced the atmosphere.

“Thursday we practiced and got back and we were hearing about everything and everyone was on edge,” Kretlow said. “It was a really weird vibe at the hotel with athletes. It was eerie, and we could feel that something was happening.”

The innate sense that had overwhelmed the athletes turned out to be both realistic and prophetic as new information came rolling in. First, the NBA postponed its season indefinitely and then the Division I men’s and women’s basketball tournaments were called off. No more March Madness.

From there, it was inevitable that the D-III national track and field competition would be next, and within hours, it was officially cancelled.

“We got the announcement and basically it’s like ‘well, I guess we’re done,” Kretlow said. “We were all in shock.”

With the staggering news putting Kretlow and her fellow competitors in a daze, the only choice anyone had was to find the quickest flight home and let the situation evolve. Within the 36 hours, the University of St. Thomas senior was back at her off-campus apartment in the Twin Cities and attempting to grasp some sort of perspective and digest the situation alongside her roommates, who were also a part of the track and field team. There was still some hope that the Minnesota Intercollegiate Athletic Conference meet scheduled for April would survive, but that, too, was wiped away by the end of the weekend.

Drawing from strength she probably didn’t know she possessed and simply trying to get through each minute to get to the next hour, to get to the next day, Kretlow admitted the immediate aftermath of the pandemic has slogged forward at a cruel pace.

“Man, these days have seemed like years,” she said. “There’s just so much that has happened.”

In order to properly appreciate Kretlow’s current predicament, one must first understand where she has been and what she has accomplished.

After originally entering college as a sprinter and joining one of the top non-scholarship women’s track and field programs in the entire country, Kretlow, who graduated from Owatonna High School in 2016, took a bit of a left turn during the middle of her career and ultimately made the decision to ditch running and transition to the long jump, but only after seriously considering quitting the sport altogether due to a nagging meniscus injury.

“At that point I was just coasting,” Kretlow told the People’s Press last March. “I was just an average sprinter and getting more and more frustrated with my times. I mean, I wasn’t even running as fast as I was in high school. I didn’t want to do it anymore. What was the point? I went home after one meet (to Owatonna) and basically told my parents I wasn’t enjoying myself anymore and I wanted to be done.”

Since re-committing herself, Kretlow has experienced a meteoric rise within a short time period competing in the long jump, elevating from sixth at the conference meet in April of 2018, to ninth at the national indoor meet, to third place and All-American status at the national outdoor meet in March of 2019. Along the way, she’s also captured a pair of conference titles and numerous other first place medals.

Entering the final leg of her career, Kretlow was seeded first leading into to last week’s national meet and was in prime position to finish her career with three All-American honors by finishing in the top eight at both the D-III indoor and outdoor events.

But that’s not going to happen anymore.

Kretlow is proud of what she has accomplished and has never taken for granted the support she’s received from the UST coaching staff and her teammates, but it hasn’t been easy coming to terms with a career that will be left unfinished.

“After I got third (at the 2019 outdoor nationals) I came out feeling awesome and became an All-American,” said Kretlow, who is close to earning her Bachelor’s Degree in Biology and plans on attending an accelerated nursing program at Creighton University next fall. “It’s good knowing that I did accomplish (All-American status) and it makes it easier to accept. I was ranked so high for so long and that helps looking back at how far I’ve come. But it also makes it worse in many ways. I was in position to maybe win two national titles and it was taken away. I was that close to being on top.”

That is the reality Kretlow is dealing with at the moment, and the fact that she’s been confined to her apartment and had her capstone research project suddenly interrupted hasn’t made things any easier. She said it’s become difficult to get excited about attending class strictly online and go without the hands-on research formerly conducted in her regular lab sessions.

“It’s been hard get motivated when you’re just sitting in your room,” she said. “It’s especially hard as a science major, too. We were conducting a study on the nutritional intake of student-athletes and now that whole thing needs to be reworked. Everything is up in the air.”

Life, though, will move forward. As difficult as it is to imagine sunny days during the middle of a rainstorm, there will come a day when this pandemic has passed and billions of people from across the globe will at least return to leading semi-normal lives.

That’s just who she is.

“I am competitive,” Kretlow said. “And I am going to need something to get that out. It could be running 5Ks or crossfit, but I need to work for something.”