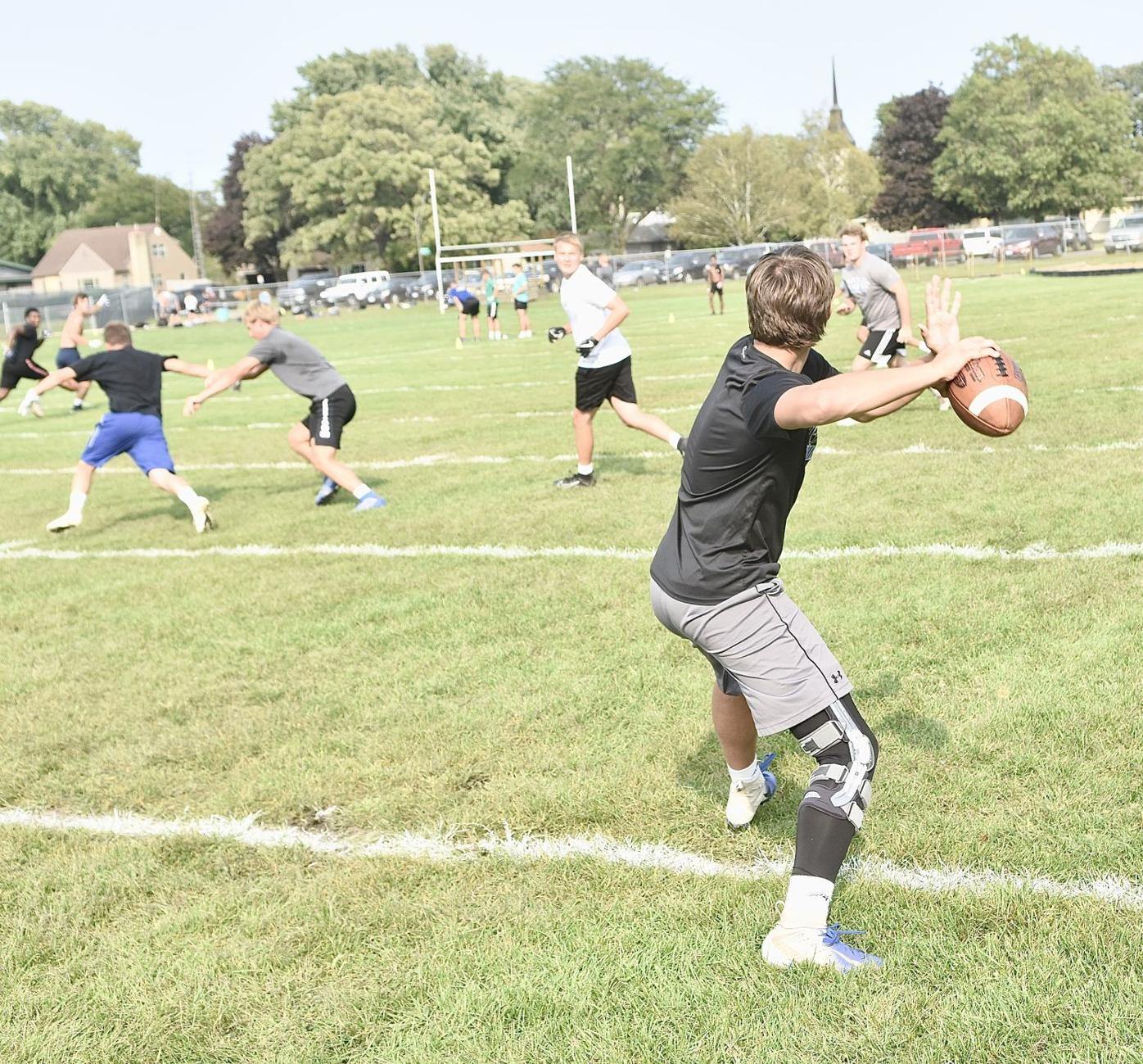 Owatonna quarterback Brayden Truelson gets ready to launch a pass deep down the left side of the field on Monday evening during the first day of several off-season practices permitted to take place by the MSHSL leading up to Oct. 5. The official start to the season is slated to begin on March 15 and feature a six-game regular season. (Jon Weisbrod/People’s Press) 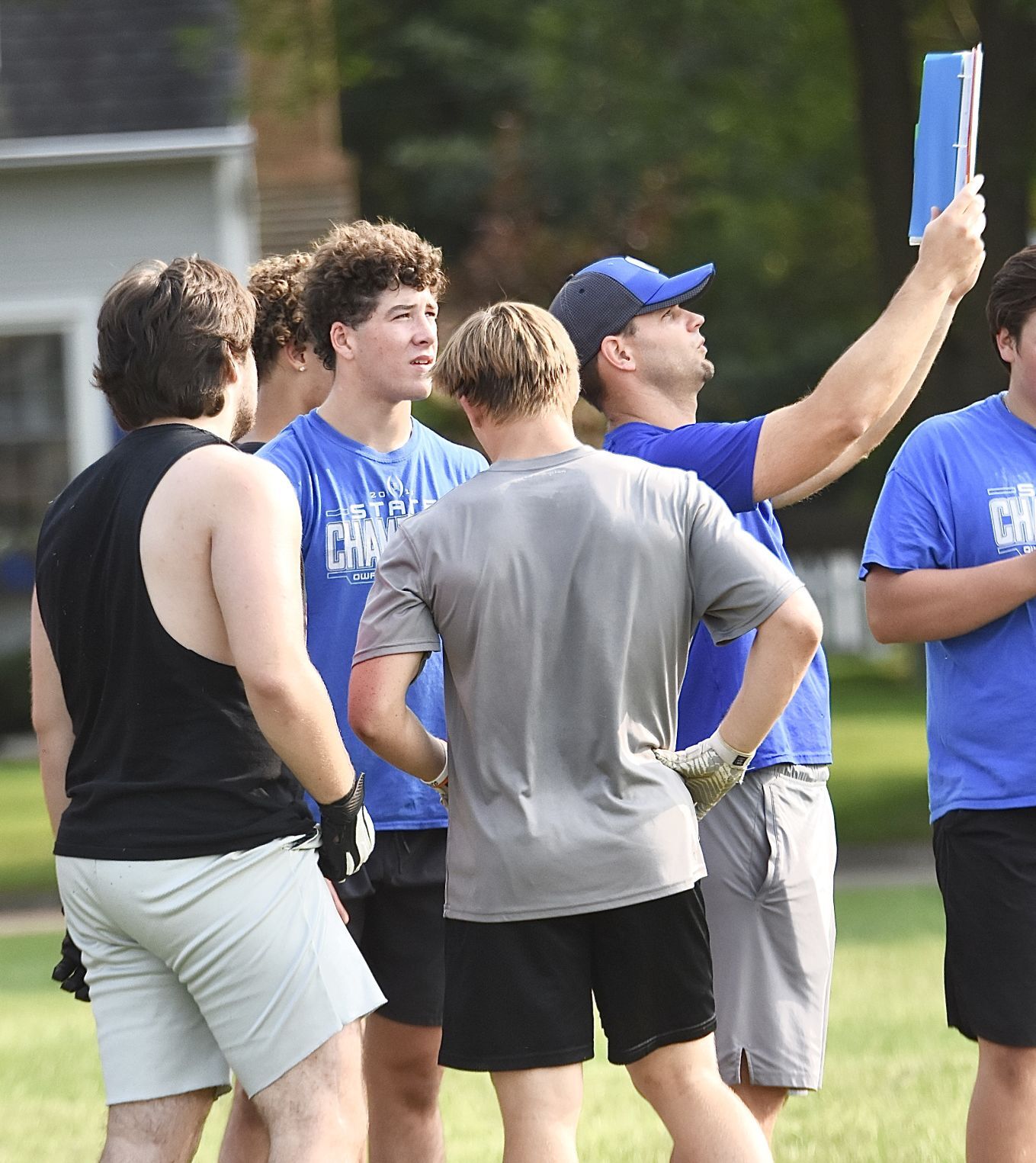 Owatonna quarterback Brayden Truelson gets ready to launch a pass deep down the left side of the field on Monday evening during the first day of several off-season practices permitted to take place by the MSHSL leading up to Oct. 5. The official start to the season is slated to begin on March 15 and feature a six-game regular season. (Jon Weisbrod/People’s Press)

This is the first installment of a multi-part series called "Fridays Without Football" scheduled to appear in the Owatonna People's Press over the next couple of weeks.

Stepping into position in the shotgun formation as a procession of receivers evenly spread from sideline-to-sideline, Brayden Truelson — flanked by running back Tanner Hall to his right — took a glance down the line.

After scanning the defense in front of him, Owatonna’s reigning all-district quarterback took the snap, quickly eyed a receiver flashing deep down the left sideline, nimbly stepped up in the pocket and rifled a spiral toward the end zone some 40 yards down field.

Racing under the ball as it dropped from the sky, Truelson’s intended target snatched the pass in-stride and loped into the end zone with his defender closing in just as he crossed the goal line.

In the unrepresented fall of 2020, the scene that unfolded on Owatonna’s practice field early Monday evening during an intra-squad 7-on-7 competition is the closest thing the Huskies will get to duplicating the enduring essence of Friday Night Lights over the next couple months.

Football simply isn’t part of the equation in Minnesota this autumn, and players, coaches, fans and communities are still adjusting to Fridays without football.

“It’s not the same,” Owatonna senior Payton Beyer said. “It’s going to be a huge adjustment, but, hey, it’s football. I’ll take whatever we can get.”

After postponing games until the late spring, the Minnesota State High School League has allowed for non-competing teams to take the field over the next three weeks as part of a larger strategy dubbed “Optional Fall Training Sessions.” The guidance stipulates that each sport, which also includes volleyball in the first phase, will be permitted to gather no more than 12 times from Sept. 14 through Oct. 3. These sessions cannot include tryouts, scrimmages, jamborees, official competitions or captain’s practices.

As to how each team will utilize ita allotted time will inevitably vary from program to program.

Longtime Owatonna head coach Jeff Williams is going to keep things simple, taking feedback from his players and electing to ditch pads altogether in favor of a more laid-back approach. He believes highly structured practices are far more effective when there is an an actual opponent to prepare for and any momentum his players might generate over the next three weeks through a series of potentially rigorous sessions would be difficult — if not impossible — to sustain in the months leading up to the newly formed “early spring” season.

Besides, excessive physical contact has never been a huge part of how Williams has prepared his players during an already rigorous season.

“We’ve always swam in our own current,” Williams said during Monday’s late session. “Some teams are going to be out here thumping, but we feel like there are better ways to use our time over the next couple weeks. We’ll do some speed training and then come out here and do stuff like this (7 on 7). We want to have a little fun.”

For the players, no matter what they do over the next couple weeks, nothing is going to be able to replicate the unmistakable rush of charging onto the field under the lights and playing in front of more than 2,000 fans. Still, there wasn’t an individual that wasn’t ecstatic to be running around with their teammates on Monday evening.

“This is the best feeling,” senior defensive lineman Gavin Rein said. “We have been locked up for who knows how long, and it’s finally good to see everyone again and I’m out here having fun. Even though we aren’t competing, it’s still good to be out here.”

The team first met Monday for a 45-minute training session aimed at honing each athlete’s explosive speed and recovery. Following a short break, the players made their way onto the painted fields adjacent to the high school for some basic pre-snap alignment refreshers before jumping right into 7 on 7.

The vast area stretching parallel to Prospect Street on the far south end of the campus was utilized by the varsity and b-squad teams and is where the Huskies unceremoniously took their first steps toward securing a fifth consecutive Section 1-5A championship and fourth state title since 2013. However, it remains to be seen if the MSHSL will permit any version of a postseason this year or next.

The uncertainty of the entire 2020-21 athletic calendar has affected each player differently, though most appeared grateful to be given the opportunity to play even a slimmed-down version of a regular season, which is likely to kickoff with a Week 1 showdown against a an undetermined opponent Friday, March 26.

At this point the only thing that’s been confirmed is that March 15 will be the first day of practice. Owatonna’s game schedule will be announced in the next couple months.

“It’s been a lot,” senior defensive back Zach Stransky said. “I don’t feel bad about it because I have had things to keep my mind off everything. You just have to wait for things to open up so we can start doing things like this (7 on 7). When I finally get the chance to get back into it, I’ll being pushing myself even harder and making myself into the best possible player I can be in the time we have.”

Owatonna has validated itself as one of the top handful of football programs in all of Class 5A, and this year’s roster — though not as deep as some recent OHS teams — boasts an enviable core of experienced and talented players.

Brayden Truelson might be the most accomplished returning quarterback in the entire Big Southeast District and Beyer the most dangerous individual weapon at two different positions (receiver, cornerback).

Zach Stransky has been playing on the varsity team since his a sophomore year, which isn’t a common occurrence in the Huskies’ program, and Rein is poised to pick up where he left off in Week 4 last year when he suffered a season-ending knee injury. Before going down against Rochester Mayo, the 6-2, 265-pound defensive lineman had settled in as the Huskies’ disruptive starting nose guard.

"Hopefully, we get a season," Rein said. "Because I definitely think if we get a a chance to play, you could be seeing a lot more kids playing on this team playing college football. We have the talent."