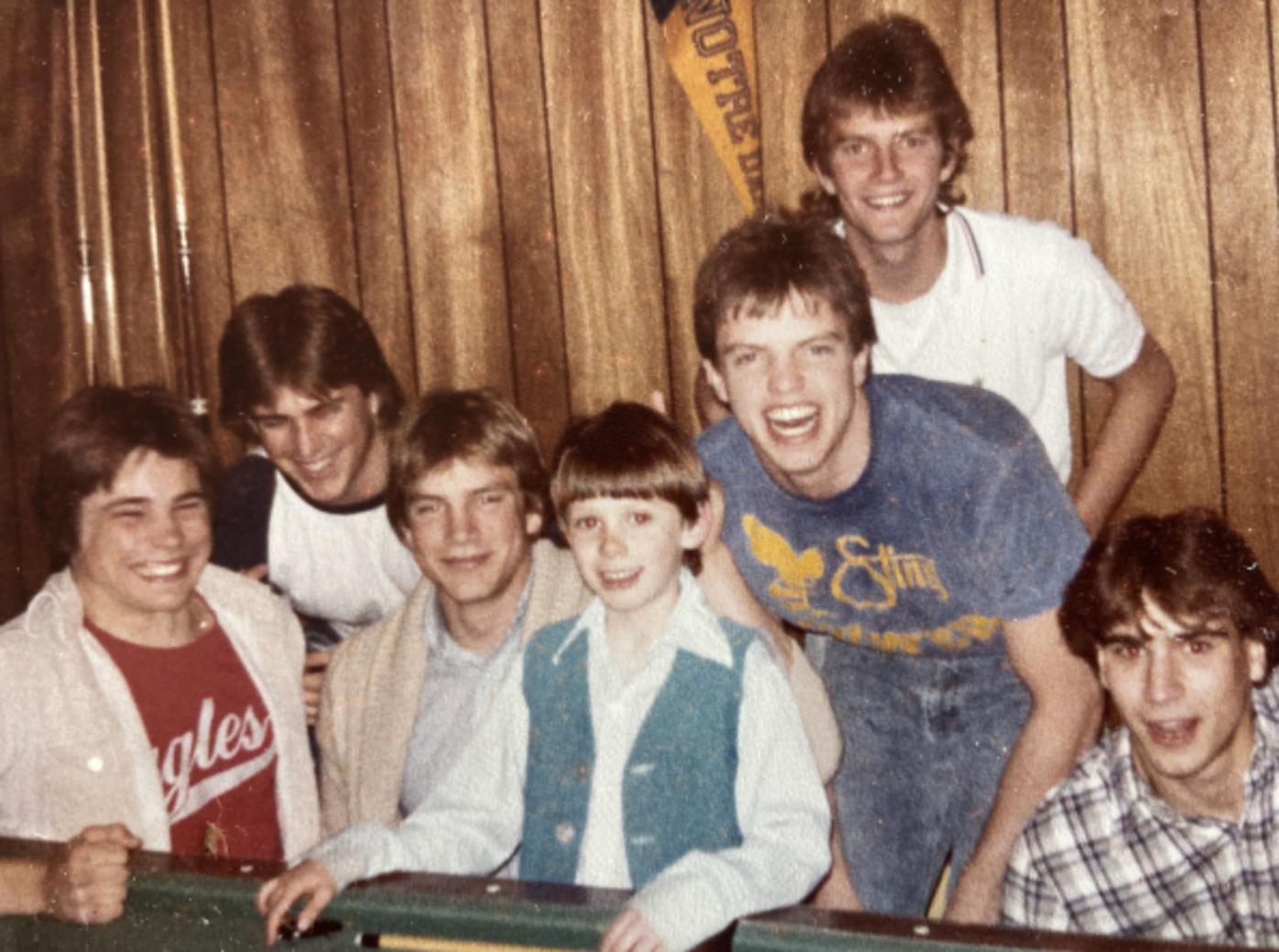 Nolan Randall, nephew of Willie Randall, is surrounded by athletes from the 1981 state championship team celebrate his birthday. Nolan along with this mother, Franny, tragically passed after being involved in a car accident five weeks after the state meet. (Submitted photo)

Saturday, June 6, 1981 started off like any other late spring day in Minnesota.

The sun shown bright and warm and the wind blew at a consistent, but not overpowering, rate, give or take a few large gusts. The atmospheric pressure pushing down on all of the athletes and spectators crammed into the bleachers in the southern Minneapolis suburb of Bloomington was unregisterable, but the pressure inside John Killen’s chest as he approached the starting blocks for the half-mile run was very much so.

All of the other members of the Owatonna Huskies’ boys track and field that had competed up to that point had registered points during their various events and the Huskies found themselves near the top of the Class AA State Championship table with only two events remaining. Killen, who by then had established himself as one of the faster runners in all of southern Minnesota, felt the pressure to not let his team down.

The race began without any indications that it would go anything but well, but as it progressed, Killen found himself trapped. A runner each from Wayzata and Minneapolis Southwest High Schools had broken away from the fray and would proceed to claim first and second place, respectively, but Killen was stuck in the middle of a four-runner pack and was unable to free himself by the time the race ended. Killen finished in 1:58.91, good for sixth place overall and the one team point that came along with it.

He was disappointed and the Owatonna team now needed to earn at least five points during the 1,600-meter relay to leapfrog Minneapolis Central High School and claim the school’s first track and field state championship since the early-1950s.

The Huskies did not win, but they came ever-so close, falling to Wayzata by seven milliseconds despite the best efforts of Tim Warner, the relay team’s final runner. However, their second place finish earned them their requisite five points.

The Owatonna High School boys track and field team and the eight athletes that represented them on that warm day in early June of 1981 were state champions.

While the entire team, as well as legendary coach Ev Berg, were ecstatic, perhaps no one was more so than Killen.

“Thank God we all earned points. I earned one point and I always like to think that that one point gave us the point we needed to win.”

Patrick Shultz was a sophomore when he first laid roots in Owatonna.

“I was the ‘outsider’ of the team so to speak,” Shultz wrote to the People’s Press in an email.

Schultz’s family had just moved to Owatonna from Oshkosh, Wisconsin in 1979 and he started with the track and field team as a junior in 1980. Shultz had run the quarter-mile and sprinted for Lourdes Academy, a Catholic high school located just west of the Fox River in Oshkosh, and he wondered how he would fit in with the track team at his new school. A written correspondence from coach Berg saved him from any amount of lost sleep.

“My first contact with our coach, Ev Berg, happened when I was still a sophomore at Lourdes Academy in Oshkosh. It was a beautiful letter, which I still have, congratulating me on a very good track season that year and how excited he was that I was coming to Owatonna. I felt right at home right away. He told me about the other guys on the team, the times they ran and how they finished at various meets. He told me that as a quarter-miler and sprinter that I was going to fit right in… and I did. All the guys were super nice and welcoming to me and I had instant friends.”

Shultz’s first interaction with coach Berg was far from unusual; that’s simply the kind of guy he was.

“Anytime that you were in his presence, you were in the presence of somebody who was a true leader, a champion human being and he cared for your best interests the whole time,” said Warner, a co-captain of the 1981 team who participated in the hurdles, triple jump and relays.

None of the athletes could help themselves from speaking about the military veteran and their social studies teacher in the highest possible terms.

“Ev Berg was a fantastic coach, but, more importantly, an outstanding human being and a role model. I learned a lot not only about training from him, but about life in general,” Schultz said.

“He was a humble guy. He had a great sense of humor. He was just very calming. He had a calming demeanor about him. Father-like figure. Just a good authority figure. Just the kind of guy you wanted to work for and impress,” said Joe Cashman, another member of the 1981 squad. “It was an honor to know and learn from someone like coach Berg. I’ll never forget the wisdom, humor and discipline he taught us. “

Killen said Berg and his wife Pat were “significant influences” on his life and taught him about making a commitment, performing and having an expectation for excellence. Berg was about ethics, commitment and doing things in a quality way. Those lessons have played out in Killen’s life and Killen said Berg was the most influential person in his life after his father and mother.

“Ev Berg was an institution. Just a tremendous leader. I was so fortunate to run for him for all four years,” Killen said.

But for as great of a person as he was, as difficult as it may be to believe, Berg was perhaps an even better track coach.

“I remember coming down to the locker room each Monday to see our workouts posted for the week,” said Willie Randall, the team’s other co-captain. “They were meticulously written and thought out. Every workout was building us towards our championship form. He knew exactly how far he could push us as we prepared for the state meet. We owe our accomplishment to his meticulous preparation and leadership.”

Come the 1981 season, Berg had been at the helm of the Owatonna track and field team for quite some time and, yet, he had limited accolades to show for it. The competition in the Big 9 Conference, a trend that persists to this day, was ruthless. Section 1AA, rife with schools such as Burnsville, the Lakevilles and Apple Valley, was even more so. Trips to the state tournament, no matter the sport, were rare, even with Owatonna’s proclivity for producing talented athletes.

“We had been gradually getting to the point where we knew we had something senior year. We knew we had something special just with our practice times and the evolution of us from our junior into our senior year, becoming more mature, faster and stronger,” Warner recalled. “We had been winning track meets throughout the season and just devastating anybody we ran against. Dual meets, triangulars, the Pony Relays we won, the Robbinsdale Robin Relays we won, the Faribault Invitational we won, we won the Owatonna Invitational, we won the Mankato Invitational. So, we’d been pretty dominant that whole season and we were expecting to go home with the gold. [But], not only did we want to win it for ourselves, we wanted to win it for Ev Berg. More than anything, we wanted to win it for Coach Berg.”

“Our team didn’t like to lose and our team was always gunning for a win,” Killen said. “We all knew after we qualified that we had the talent and ability to win. Now it was, can we perform?”

The State Meet and Tragedy

Randall will never forget the first moment he stepped on the track that Saturday afternoon.

“The Saturday of the meet was incredibly hot, so we huddled in the field house to stay out of the sun. The meet was going to last all day and Coach reminded us to stay inside to preserve our energy. At one point in the morning, a couple teammates came in from outside and enthusiastically insisted that we all go run around the track, so we did. It was about 30 minutes before the start of the first race and the stadium was completely full. As we jogged in front of the bleachers nearly half of the stadium erupted in cheers. They were cheering for us! Nearly half of the stadium was filled with Owatonna fans. The support we received by the town was unlike anything I would have ever expected at a track meet. There was no stopping us at that point.”

While the Huskies ultimately only claimed one first place finish, Rick Schroeder took home gold in the 110-meter high hurdles with a time of 13.85 seconds, all eight of the athletes that participated scored points. Schultz came in fourth during the 400-meter dash; Warner claimed third in the 300-meter high hurdle event; Killen, as previously mentioned, earned a sixth place finish in the 800-meter run; the 1,600-meter medley relay team finished fourth; and the 1,600-meter relay team cemented the state championship with their second place result.

In all, the team scored 33 points to finish one ahead of Minneapolis Central and three clear of Bloomington Kennedy. It was Berg’s first state title and the first Owatonna boys track and field title in over three decades. No iteration of the Huskies have brought home a state championship since. And along for the entire ride was Nolan Randall.

Nolan was the young nephew of Willie and the son of Mary Fran, or “Franny” as she was widely known, Randall’s sister.

Franny was a single mother, so Willie took young Nolan under his wing, attempting to fill both a brother- and father-figure role for the child that was desperately missing.

“Nolan was my shadow and he became a part of our team,” Randall said. “For his birthday in April of my senior year, I asked the guys to bring over whoever could for a surprise birthday party. We bought him his own track uniform for him to wear to the meets. When we returned home from the state meet by charter bus, he was with us. And as Todd Hale interviewed each of us coming off the bus, Nolan was interviewed.”

Willie and the rest of the team loved Nolan and Nolan loved them back.

It was five weeks after the conclusion of that state track meet when Willie’s life was turned upside down.

Franny and Nolan had been involved in a car accident, Willie was notified. Neither survived.

“It was devastating,” Randall said. “The team served as his pallbearers at his funeral, each of them wearing their state medal, and I placed one of mine with Nolan in the casket before he was buried. To help his memory and spirit for track to live on, the team created the Nolan Randall Memorial Track Award, voted on by the team to recognize the one athlete who was the heart of the team.”

While Franny and Nolan may be gone, their memory will forever live on in the hearts and minds of Willie and the rest of the 1981 state champion track and field team.