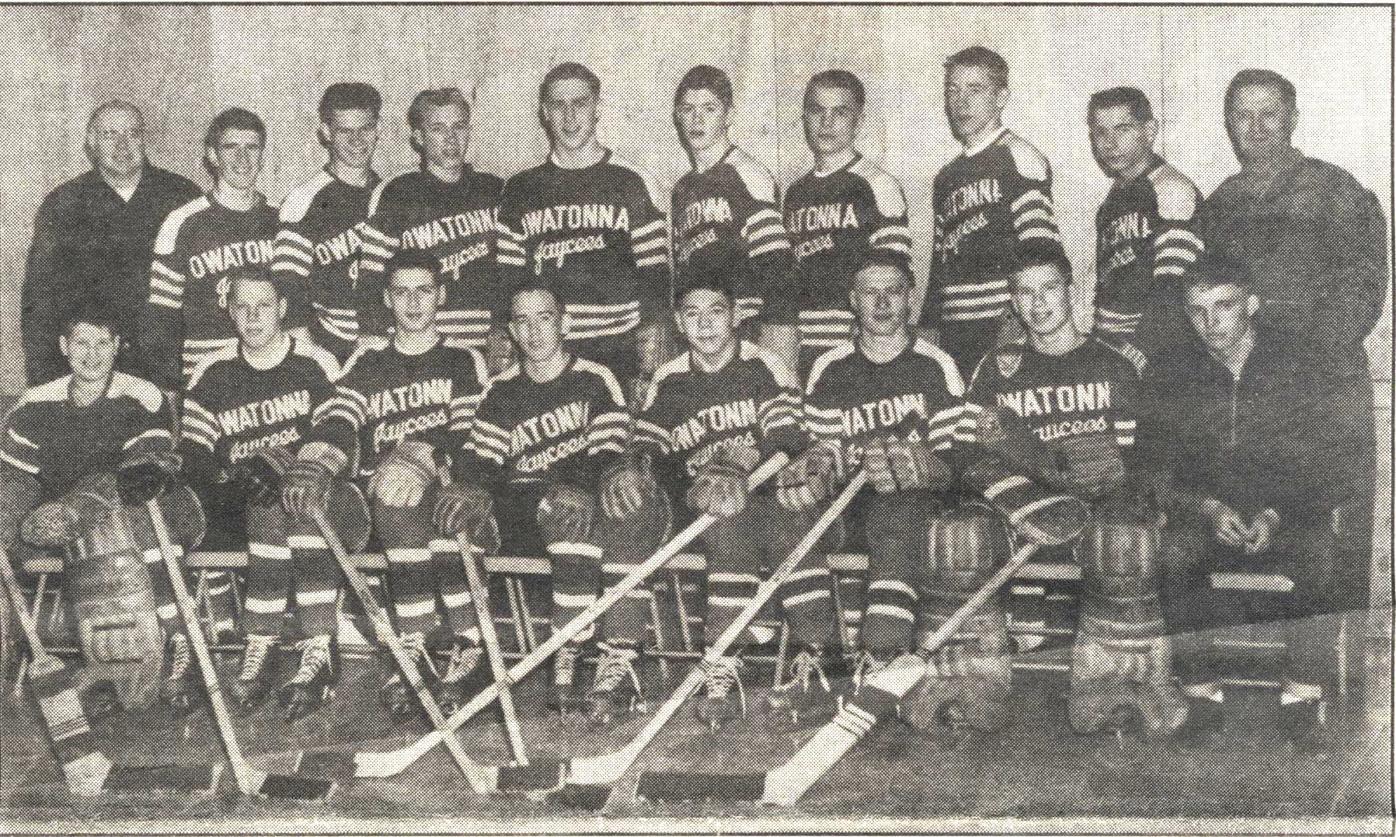 In this 1963 photo of the Owatonna Jaycee Midget hockey team, Noel Jenke can be seen in the back row, fifth from the left with the rest of his state champion teammates. Jenke also played baseball, basketball and football for Owatonna High School and eventually lettered seven times in three sports for the Minnesota Gophers. (Submitted photo) 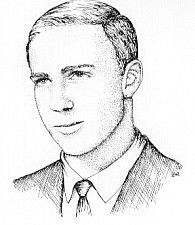 Remove his unprecedented athletic achievements — starting with a distinguished career at Owatonna High School and all the way through his days as an outfielder in the Boston Red Sox organization and later a special teams dynamo in the NFL — and Noel Jenke’s legacy still remains extraordinary.

Talk to anyone who knew him, or even briefly met him, and words like humble, special, faithful and kind are thrown out with a reverential tone that is both sincere and justified.

Bottom line, Noel Jenke was more than just an accomplished and well-known athlete. He was a wonderful human being.

“(He) was my hero — my everything and my dad,” Noel’s oldest son, Joe, told the Owatonna People’s Press on Wednesday. “My dad taught us right from wrong. He was always 100 percent truthful. He cared for others and he sacrificed a lot in his life for us. That is what I will always remember.”

Added longtime friend, and former Bemidji State University hockey great, Mark Kristo: “He would always be the first guy to buy you a beer and sit down and want to talk about you. He was so humble — so kind. It was an honor to know Noel Jenke.”

Following a brief sickness that included a battle with the COVID-19, Noel Jenke died on Thursday, July 23 at a hospital in Milwaukee at 5:28 p.m. He was 73 years old.

“My dad did was not sick that long,” Joe Jenke said. “Throughout the years he’s had a lot of surgeries.”

Noel was eventually sent home after his latest operation in early-July, but was quickly readmitted after his temperature elevated to 102 degrees and his breathing became labored. It was then that he tested positive for the coronavirus and contracted pneumonia.

“Before surgery, (he) had to take a COVID test and results came back negative,” Joe added. “After surgery, he was recovering at the hospital for two weeks. When he was released, he was coughing and (had) a hard time breathing…and eventually tested positive for COVID-19.”

Jenke’s unexpected passing rocked both the Owatonna community at large and the University of Minnesota athletic department as a whole. He was the most decorated prep athlete in the state of Minnesota during in his generation and ranked as the second-best athlete to don the maroon and gold when the Gophers released their historical list of the top individuals to ever play sports at the university.

“The thing about Noel is everyone rightfully talks about him as an athlete, but his character was second-to-none,” Kristo said. “There will never be another Noel Jenke.”

“Sometimes we lionize people after their death and make them more legendary than maybe they actually are,” Williams said. “But Noel was all of that. He was a fantastic athlete and a great guy and a huge supporter of the school. In this case, ‘legend’ is the moniker that should be placed upon him.”

Noel Charles Jenke was born in Owatonna on December 17, 1946. As the city’s population swelled from roughly 8,500 in the mid-1940s to well past 12,000 by the time he graduated high school, Jenke found himself fully-immersed within the burgeoning culture of OHS athletics as he entered ninth grade at the age of 14.

Jenke — who, according Williams, “would absolutely be a no-brainer on the Mount Rushmore of OHS athletics” — starred in multiple sports for the Indians, lettering three times apiece in football, basketball and baseball while also leading his club ice hockey team, which was not affiliated with the Minnesota State High School League at the time, to a state championship.

He was elected captain of three sports during his final season at OHS and earned a total of six all-conference nominations during his junior and senior years. Aside from that, he twice garnered all-state recognition in football and was named to the prestigious Parade Magazine and the Scholastic High School All-American Teams.

“I can’t wrap my brain around what he accomplished as an athlete,” said Williams, who is has written each OHS Hall-of-Fame plaque since the charter members were inducted in 1996. “Most multi-sport guys like him play football and maybe run track, but to be able to play hockey — eventually at a D-I college level — when all we had was a club team back then is simply astounding. For him to develop that skillset on the ice is amazing. And then to possess the skills he had in baseball and football is, just — the multitude of skills that it takes to do that is tough for me to even fathom.”

Drawing interest from a number of high-profile colleges, Jenke ultimately committed to the his home-state University of Minnesota Golden Gophers in 1964, and the rest is history.

Earning an unprecedented seven letters in the Big Ten Conference, Jenke played football for three years — helping the program capture the 1967 national championship — and three years of hockey . He garnered multiple all-conference nobs on the gridiron, and according to GopherSports.com, was known as a “tough two-way player with both speed and power” on the ice.

After a three-year hiatus from the diamond, Jenke joined the Gophers’ baseball team during his senior year and quickly emerged as one of the best players — at any position — in the entire nation. In his lone season playing at the Division I level, he was named first-team All-American by both the Sporting News and Topps.

“That’s the most amazing part,” Kristo said. “He probably would have earned another couple All-American nods (in baseball) had he played for all three years. For him to jump back into the sport like that, and dominate like he did, says everything about him as a player.”

In a feat that will almost certainly never be replicated, Jenke was drafted in three professional sports, becoming the Boston’s first-round pick in the 1969 MLB Draft and the Minnesota Vikings’ 12th-round pick in the NFL Draft that same year.

Three years later, he was selected by the Minnesota Fighting Saints of the Word Hockey Organization and officially became the first Big Ten athlete to ever be drafted in three different professional sports.

Jenke started his post-collegiate athletics career in the Red Sox organization and spent three seasons in the Minor Leagues where he batted a respectable .241 in 120 games.

Ultimately, Jenke decided to step away from professional baseball and join the Minnesota Vikings, who still retained his rights almost three years after they drafted him. His first full season in the NFL was his most productive as Jenke played in a career-high 15 games, including the Vikings’ postseason loss to the Dallas Cowboys in December of 1971.

“He played a lot of special teams and he was one of those guys that you’d want to avoid when he was charging down the field on a kickoff,” Kristo said. “He could hurt you.”

After being released by the Vikings the following preseason, Jenke was claimed by the Atlanta Falcons and appeared in one regular-season game before being transferred to the practice squad in September of 1972. The next year he matriculated to the Green Bay Packers and played in 10 total games over the next couple seasons before retiring from professional sports in 1975.

During his post-professional sports career, Jenke raised four children — all boys — with his wife Jane and worked in the sales department for Champion sportswear.

Despite his notable exploits on the field, Jenke’s children never felt the pressure to carry his mantle of athletic excellence and instead were met with a steadfast sense of support from their well-known father.

“When my dad introduced me to sports he never put any pressure or told me what sport to focus on,” said Joe, who found success in hockey and offers training lessons in Wisconsin. “He just said ‘play for the fun and love of the game. If you don’t love it, don’t play.”

In 1996, Jenke was named as a charter member of the Owatonna High School Hall of Fame and made a point to return to the city each year for the annual ceremony.

“He was so generous and warm and proud to be an Owatonna Indian,” Williams said. “And he made a point to grab me in the spring when we did (the HOF ceremony) then and talk to me about life and football. I can remember in 2012 we had an important game against John Marshall. They were loaded and we both came in undefeated. We found a way to win that game and invited (Noel) to sing the school song in the locker room. It was sort of a neat deal because (former John Marshall football player) Marcus Sherels was also there and he was playing for the Vikings at the time. We had our legend, and they had their legend and I’ll never forget that.”

Perhaps unsurprisingly, Joe said his dad rarely talked about his athletic accomplishments and was more concerned about raising a family and keeping his faith. He retained a network of friends, acquaintances and professional connections at every level, but never lost track of what was important.

And that will be his legacy.

“My dad was a very, very humble person,” Joe Jenke said. “He didn’t really talk about his sports accomplishments. He was always into his faith with Jesus and God. He always reminded us to go to church, and to say our prayers, and be thankful for what we have. He always told us to be nice; helpful and give back. That’s what my dad always did. That was his accomplishment he liked to talk about.”

Baseball: Selected in the first round of the 1969 MLB Draft by the Boston Red Sox; played almost three seasons in the Minor Leagues and reaching all the way to the Triple A level (one step below the Major Leagues); batted .241 with five home runs and 35 RBIs in 120 total professional games