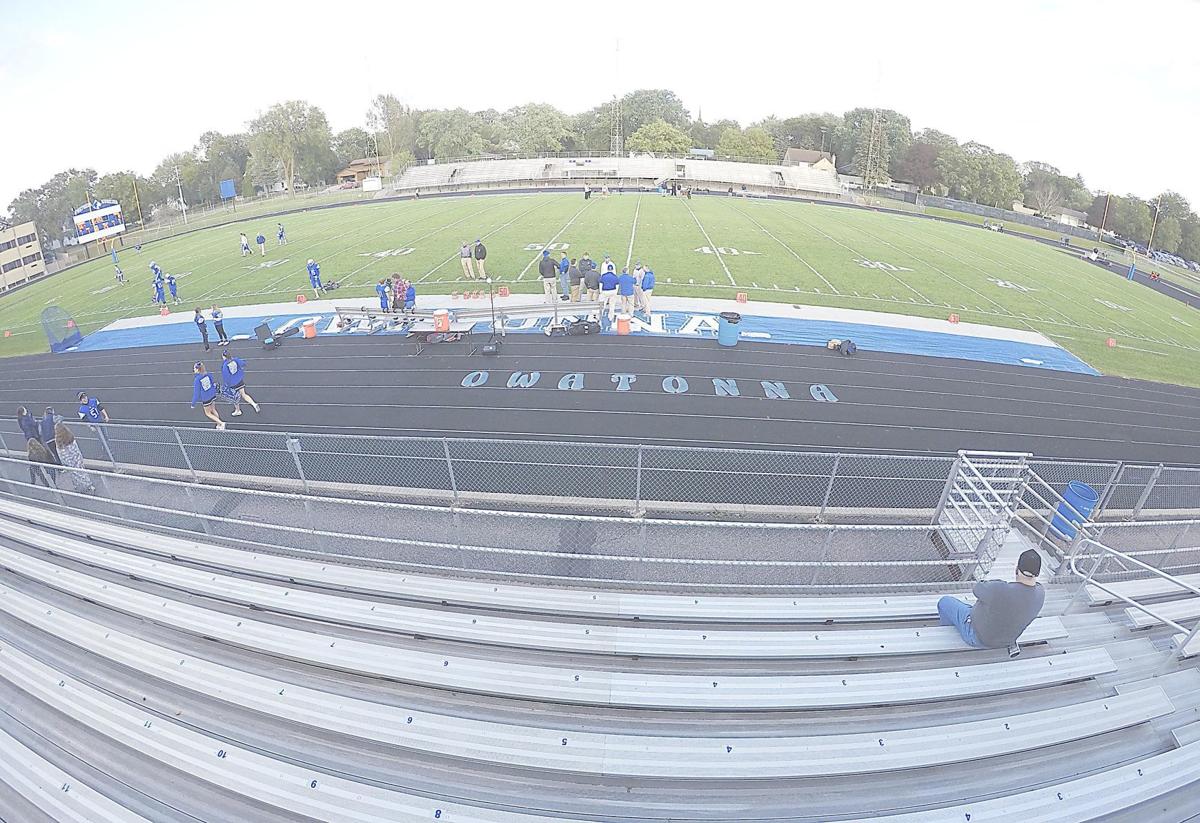 The Owatonna High School stadium is currently being used for football, lacrosse and track and field and is covered in natural grass. The OHS soccer team plays its home games several miles away near Lincoln school. The proposed bond would allocate $9 million for athletics facilities upgrades, including the addition of a 3,000-seat stadium and turf playing surface. (Jon Weisbrod/People’s Press) 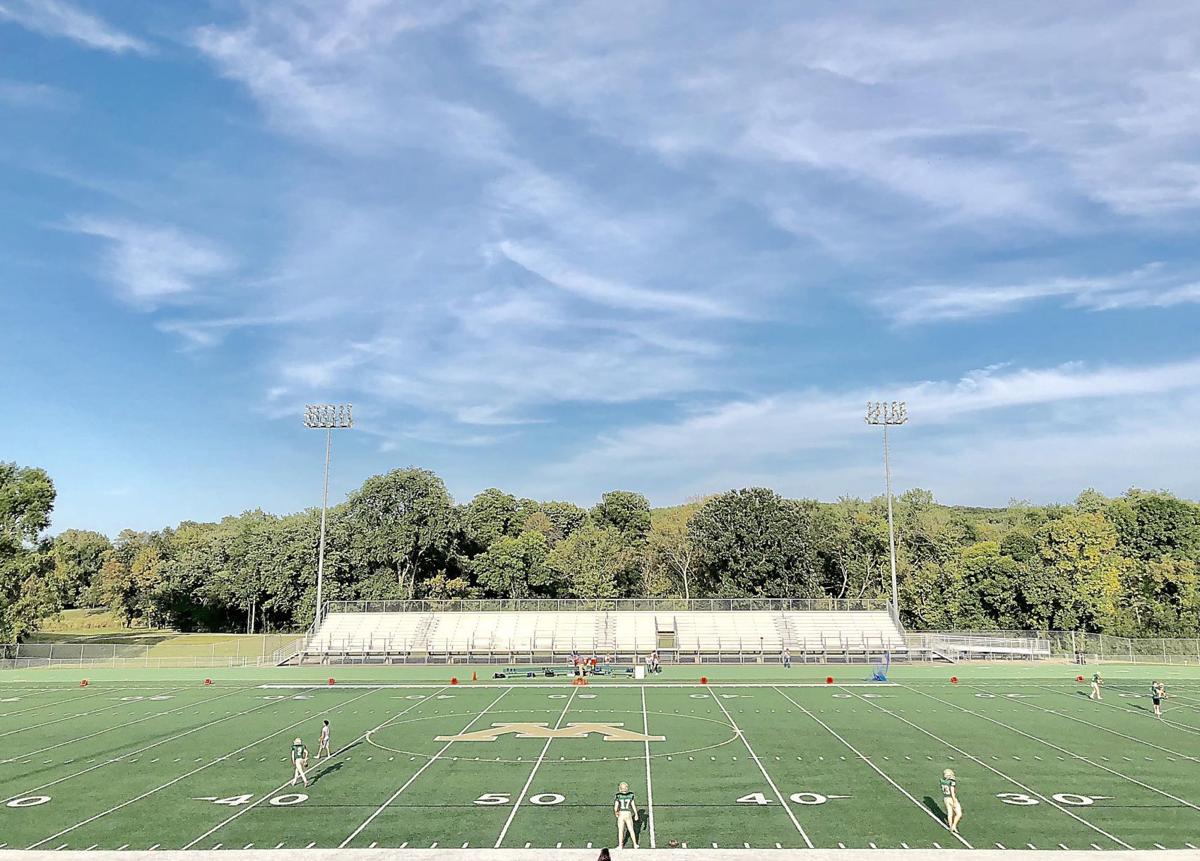 Rochester Mayo High School is one of five football teams in the Big Southeast District that play their home games on artificial grass. (Jon Weisbrod/People’s Press)

The Owatonna High School stadium is currently being used for football, lacrosse and track and field and is covered in natural grass. The OHS soccer team plays its home games several miles away near Lincoln school. The proposed bond would allocate $9 million for athletics facilities upgrades, including the addition of a 3,000-seat stadium and turf playing surface. (Jon Weisbrod/People’s Press)

Rochester Mayo High School is one of five football teams in the Big Southeast District that play their home games on artificial grass. (Jon Weisbrod/People’s Press)

With the fate of the current Owatonna High School and the proposed construction of a completely new campus being decided in less than a month, I thought it would be appropriate to side-step the hard news side of the story — I’ll allow my colleagues to take care of that — and focus specifically on athletic facilities.

But first, a quick rundown.

The community will be given a chance to vote on the issue on Tuesday, May 14. The proposal includes the construction of a brand-new high school facility with a cost of almost $140 million, most of which would come via a property tax increase starting in 2020. Local companies such as Federated Insurance, Viracon and Wenger, though, have already pledged $22 million to help reduce the tax impact on the community.

Currently, the major athletic facilities in Owatonna are adequate when compared to fellow Big Nine Conference schools, but few rise above the standard, especially for a school the size of OHS. The City of Owatonna maintains one of the top baseball stadiums in the league, Dartts Park, but beyond that, nothing specific stands out when it comes to athletic facilities. They are cozy, traditional and functional, but far from cutting-edge.

The referendum hopes to fix most of that.

According to People’s Press news reporter, Ryan Anderson — who has been covering the referendum since the beginning — a proposed sports stadium as part of the bond would cost $9 million and include a 3,000-seat stadium with athletic turf. Right now, the OHS stadium uses natural grass and, thus, hosts only track and field, football and lacrosse. Soccer plays several miles away near Lincoln school. The new high school would also include a gymnasium complex large enough to fit five full basketball courts. Right now, the OHS campus contains just one regulation-sized court.

The biggest obstacle the school district is dealing with at the moment is simply a lack of adequate practice space. Most of the current facilities were constructed before Title IX and when Owatonna’s enrollment was much smaller. Even with all of the upgrades over the years, youth teams have been forced to practice until 10 p.m. because of over-booked facilities while track and field athletes have been known to use hallways to practice sprinting.

If you include New Prague and Kasson-Mantorville — which are housed in the same district as Owatonna in football — the Huskies stack up against five schools with turf stadiums, most of which have smaller enrollments than OHS. They are: Winona, Austin, New Prague, Kasson-Mantorville and Rochester Mayo. If you include fellow Section 1 districts with slightly larger enrollments, that list grows even larger as both Lakeville schools and Farmington have large turf stadiums.

Though the “arms race” for the biggest and best athletic facilities isn’t quite as intense in this part of the state as it is just 50 miles north in the suburbs, the culture has seeped to southern Minnesota. For instance, Albert Lea passed a $24 million bond to upgrade its athletic facilities alone while Kasson-Mantorville has added a turf stadium, additional folding-chair seating in the upper level of the main gymnasium and a state-of-the-art weight-lifting facility just within the last 5-6 years. Those two schools combined are roughly the size of OHS.

Even tiny area high schools like Janesville-Waldorf-Pemberton, with an enrollment of less than 200 students, opened 2017 with a sparkling new artificial grass football field and the state’s first ever fully-turfed outdoor high school softball field.

The added advantages of turf are abundant. Though more expensive up front, the upkeep is minimal and teams aren’t held hostage by Mother Nature when it comes to the unpredictable fall and spring weather in Minnesota. According to piece by John Millea that appeared at SouthernMinn.com on Monday, “earlier this spring as outdoor spring sports schedules all over the state were being postponed and cancelled after recent snow, the softball field in Janesville was a busy place. And the J-W-P team was nowhere to be seen; (Steele County) teams from New Richland-Hartland-Ellendale-Geneva and Medford were playing.”

A new turf facility could be used as a source of revenue as well. It could be rented out and utilized in the offseason for large soccer and lacrosse tournaments. Right now, the stadium is rarely, if ever, exploited in the summer months and requires daily upkeep in the peak seasons of the mid-fall and late-spring.

Currently, there is no hard blue print of the proposed athletic upgrades, but if the bond passes it would be safe to say OHS would elevate to the top of the heap in the Big Nine Conference and challenge even its large suburban counterparts for the best and most functional athletic facilities.

Thousands of fans flock to the current stadium for football games while soccer and lacrosse are two of the fastest-growing sports in the city. It is unlikely the school would have any issue filling a 3,000-seat complex to capacity, especially in the fall.

If the bond does not pass, similar to the $128 million proposal in 2008, private funds will likely be needed to upgrade the OHS stadium to artificial turf, if the district or booster clubs decide to pursue that at all.

As stated, the current OHS athletic complexes are up to standard and are nothing to be ashamed of — Owatonna has done a fantastic job with what they have been dealt and maintenance has rarely been as issue. However, these facilities could start to lag behind in the near future of something isn’t done. Even a moderate downfall can turn the current stadium surface into a sloppy mess, and in some cases, an actual hazard. Also, it should go without saying that it is unfair to force parents to pick up their kids past 10 p.m. after practice just because they are at the bottom of the priority list for field usage.

Bottom line: If the referendum is passed or denied, athletics within the city of Owatonna will continue to shine.

It all depends on what the stage is going to look like.