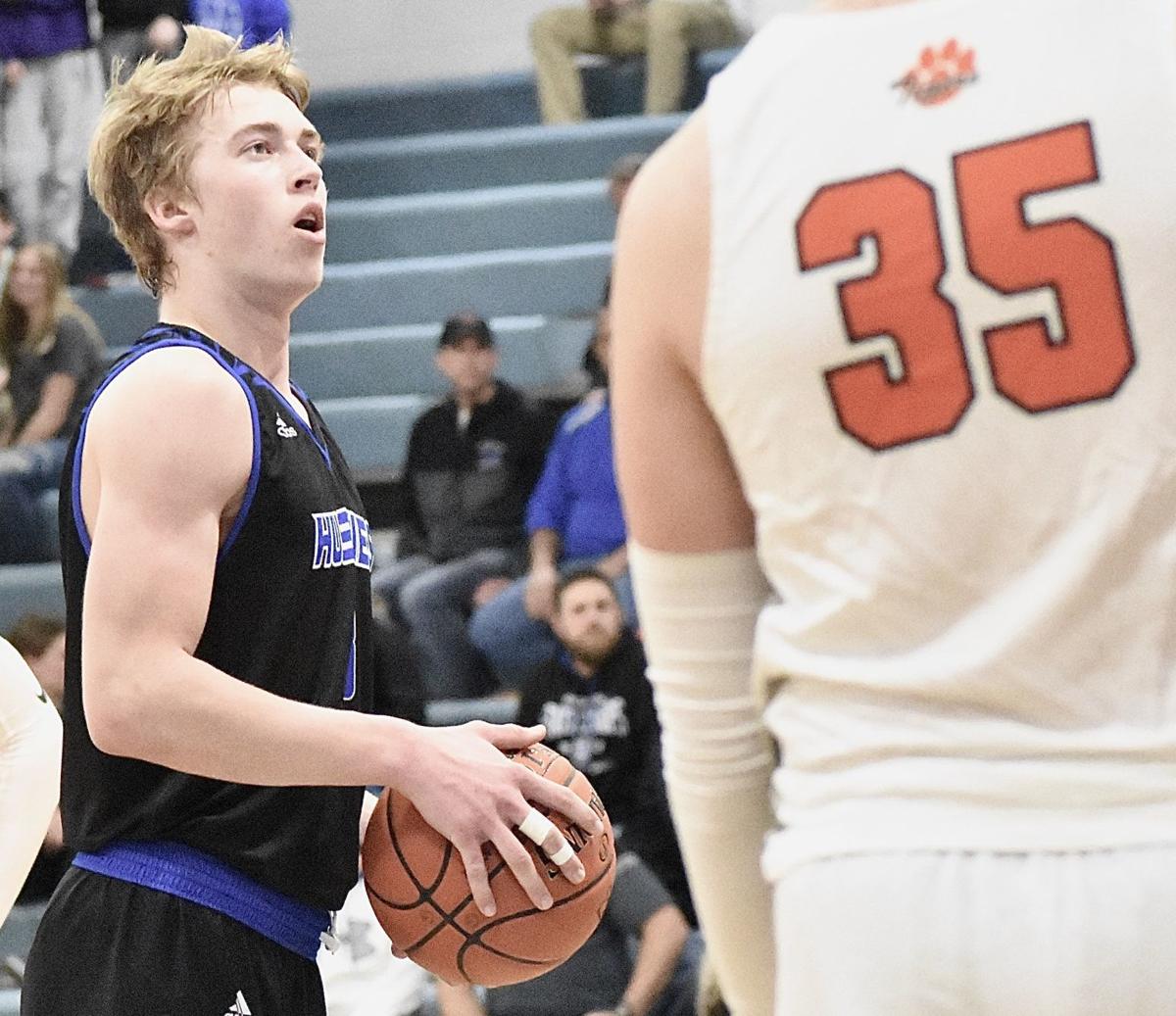 Owatonna junior Payton Beyer emerged as a do-it-all swingman during this past winter and was one of the Huskies’ top defenders and rebounders. (Dan Weisbrod/For the People’s Press) 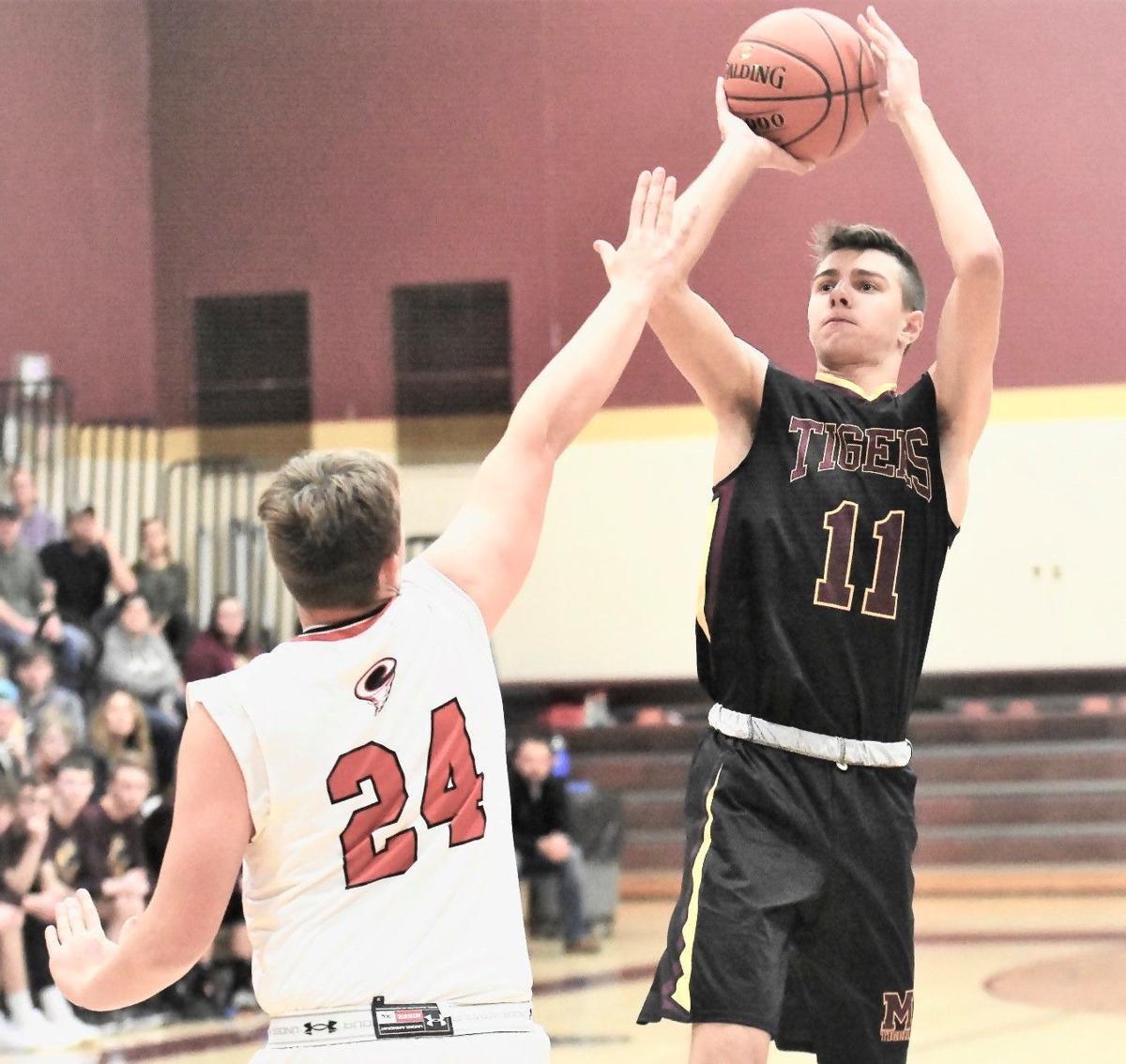 AJ Vandereide led the Tigers in scoring, rebounding, blocks and field goal percentage this past season and is the third all-area first-team performer for Medford since 2015. (Jon Weisbrod/People’s Press)

Owatonna junior Payton Beyer emerged as a do-it-all swingman during this past winter and was one of the Huskies’ top defenders and rebounders. (Dan Weisbrod/For the People’s Press)

AJ Vandereide led the Tigers in scoring, rebounding, blocks and field goal percentage this past season and is the third all-area first-team performer for Medford since 2015. (Jon Weisbrod/People’s Press)

Aside from the obvious thread of simply being really, really good at basketball, there is a single common attribute that sets the 2019-20 Owatonna People’s Press all-area boys basketball team apart from those of recent lineage.

Mirroring a trend that has infiltrated every level of the sport, the latest five members of the first-team squad boast a universal level of pure size and length that would make them extremely difficult to guard of they were to somehow join forces and take the floor as a single unit.

In fact, the shortest player in the group — Payton Beyer — stands somewhere between 6-foot-3 and 6-foot-4 and might actually be the longest in terms of relative wingspan and definitely possesses the top vertical leap of the bunch.

So, yeah, these boys have some pretty desirable measurables, and their final statistics reflect that. Four individuals averaged at least 1.1 steals per game and three averaged at least one block. And perhaps most impressively, all-but one shot at least 50% from the field overall.

If they were to take the floor together, Kaden Thomas, who is listed at 6-4, would assume primary ball-handling duties and facilitate the offense with real-life teammate Gabe Hagen, who also stands 6-4 and led Blooming Prairie in assists over the last two seasons. In fact, the Awesome Blossom duo combined to average 8.9 dimes per game in 2019-20. Not bad.

Dushek — the tallest of the bunch at 6-7 — would serve as the axis of the offense on the block while Beyer would assume his duties as a slashing wing and versatile defender. Medford’s Vandereide is a wiry 6-6 and is blessed with great athleticism for his size, so his ability to switch between playing the “three position,” or small forward, would be vital.

As fun as it is to imagine what these boys would look like as an actual team, it’s obviously an imperfect and abstract idea. In reality, the superb numbers each one produced this past season was a byproduct of their individual situations and how they adapted to their team’s overall system, and that alone is a valuable skill.

So, below is in-depth look at each first-team member, complete with statistics, reaction from their head coach and analysis based on numerous in-person observations:

FROM COACH JOSH WILLIAMS: “Best athlete on the team and simply made plays on both ends, and on the glass that no one else could. He loves to compete and cares deeply for the success of our team.”

OPP OBSERVATION: Drenched in raw athleticism and possessing a unique set of physical tools, Beyer took an enormous leap in his development this past winter, ultimately emerging from a secondary role player as a sophomore to an all-conference honorable mention performer as a junior. Once he found his comfort zone after recovering from a bout with mononucleosis in early-December, Beyer blossomed into a stat-munching machine, regularly finishing with double-digit points, 5-7 rebounds, 3-4 assists, 2-3 steals and 1-2 three-pointers on any given night. He could guard multiple positions with ease and was known to soar above the rim and snatch rebounds in heavy traffic, one of which essentially secured Owatonna’s thrilling come-from-behind win over Farmington in the section tournament.

THE NEXT STEP: After a breakout season on the gridiron, Beyer has received interest from the Division I level for football, and that could eventually turn out to be his path to the next level. He’s a smidgen taller than 6-3 and has enormous hands and elite jumping ability, so it’s easy to see why college football scouts have him on their radar as a receiver.

BOTTOM LINE: When it comes to basketball, Beyer is in a great spot as he won’t be asked to serve as the team’s first, or even second, offensive option next season as fellow starters Evan Dushek, Brayden Williams and Nolan Burmeister each return. This will allow him to maintain his duties as an elite jack-of-all-trades wing player that possesses an ability to directly-influence the outcome of the game in a variety of the ways.

FROM COACH JOSH WILLIAMS: “We have had a number of very good players come through in the last 20 years, but none that saw double and triple teams on a nightly basis. Yet Evan was still able to put up 20 (points) and 10 (rebounds) a night. That in itself is extremely impressive. Being only a sophomore has time to improve every aspect of his game to pursue his goals at competing at the next level.”

OPP OBSERVATION: From his headband and goggles to a vintage back-to-the-basket style and unblockable fade-away, Dushek possesses an old-school game that, ironically, fit perfectly into the Huskies’ modern philosophy of taking 3-pointers and attacking the rim. Standing a legitimate 6-foot-7 and at least 245 pounds with broad shoulders, he attracted multiple defenders on every possession, which, in turn, freed up space on the perimeter for Owatonna’s improved group of shooters to get open looks. Emerging as likely the best frontcourt player Josh Williams has ever coached in 15-plus seasons at the helm, Dushek improved in all facets from his freshman to sophomore seasons and started to embrace his role as the centerpiece of the program moving forward.

THE NEXT STEP: Based purely on his physical tools and inherent skills — such as a soft-touch around the rim, high-end rebounding ability and great footwork — Dushek will be heavily recruited by the scholarship level, if he hasn’t already. If he can continue to develop and learn to guard multiple positions and add a respectable 3-point shot, he’s slam-dunk Division I prospect. Dushek has always been the tallest kid in his class, so perhaps he’s done growing, but even an additional inch would superficially elevate him up the rankings as Division I and Division II coaches value size, size, size.

FROM COACH NATE PILLER: “I believe Gabe is the best forward in Section 1-A. There simply isn’t anyone else I would prefer to have on my team.”

OPP OBSERVATION: Hagen somehow improved in virtually every measurable statistic on both ends of the floor in 2019-20, and this came after a junior season in which he finished 2.7 rebounds shy of averaging a double-double and shot nearly 55% from the field. Though always been regarded as a pass-first player, Hagen wasn’t afraid to take over by shooting the ball if the situation called for it. He single-handedly carried the Blossoms’ offense for the first 22 minutes during perhaps the biggest game in program history by scoring all 23 of his points in the span against a defender that stood a legitimate 6-foot-7-inches. In the game’s final 14 minutes, he scored zero points, but handed out four assists.

THE NEXT STEP: Hagen has accepted a scholarship to play football at Division II powerhouse Minnesota State University in Mankato. He lined up at receiver in high school, but is expected to transition to tight end with the Mavericks. He runs a 4.65-second 40-yard dash and boasts soft hands and excellent footwork.

BOTTOM LINE: He was the best player on a team that finished 25-3 and would have been a top four seed if the Class A tournament. Oh, and 62% shooting is downright elite.

FROM COACH NATE PILLER: “Kaden played an outstanding shooting guard for us and was a coach on the court. He’s very knowledgeable (and) is a good decision-maker.”

OPP OBSERVATION: If he hadn’t come up through the ranks alongside one of the best Blooming Prairie basketball players ever, Thomas could have easily averaged close to 20 points per game as a senior. In fact, his willingness to accept that the offense wasn’t going to run through him on every possession speaks volumes about his character. Standing around 6-4 with a smooth stroke from downtown, Thomas was a rare breed in the Gopher Conference and he used his length to his advantage, leading the team in steals at 2.1 per game while averaging only 1.6 fouls. He established himself as one of the top 3-point shooters in the league, and though he technically finished second on the team in assists at 4.4 per game, he led the Blossoms in assist-to-turnover ratio at 3.14.

THE NEXT STEP: If Thomas so chooses, he could play college basketball, but would need to find the perfect fit in order to best accentuate his skills. He has enough size to get by as a D-III combo-guard, but would be ideally suited to play the point in order to maximize his measurables. He’s a decent ball-handler and a good decision-maker, so it’s entirely possible for this to happen. Even at Division III, the heightened level of quickness required to flourish in the backcourt will be an adjustment.

BOTTOM LINE: Thomas pinged on the local radar as a freshman and put a bow on an awesome career in 2019-20.

FROM COACH TODD SCHNEIDER: “We encouraged AJ to be more selfish on the court and put up more shots, but he is a team-first player. He leads by example and displays great hustle in games and in practice. We feel we have our program headed in the right direction and AJ deserves credit for being the catalyst and turning the program around.”

OPP OBSERVATION: Vandereide might be the best raw basketball player the Medford program has seen in the last dozen years. He’s tall (6-foot-6), lean and athletic and averaged 2.1 steals-plus-blocks per game while also finishing tops on the team in scoring, rebounding and field goal percentage. He was often tasked with guarding traditional post players that out-weighed him by 30 pounds and he more than held his own. Vandereide, though, wasn’t completely tethered to the paint, often jumping on the perimeter and using his footwork to cause fits against smaller guards.

THE NEXT STEP: As is the case with any frontcourt player in the modern game, Vandereide is a reliable 3-point shot away from seriously turning heads and developing into a legitimate college prospect, because the rest of his game is that well-rounded.

BOTTOM LINE: Though the program still has a long way to go, Vandereide was unquestionably the chief reason why the Tigers won more games in 2019-20 than the last three seasons combined and finished higher in the final standings than any Medford team for at least the last 16 years.

Notable: Was limited to 17 games due to injury; given honorable mention consideration in Gopher Conference

Notable: Shared Owatonna Teammate of the Year Award; finished second on the team in 3PG

Notable: Finished first on the team in deflections, second in steals and third in assists