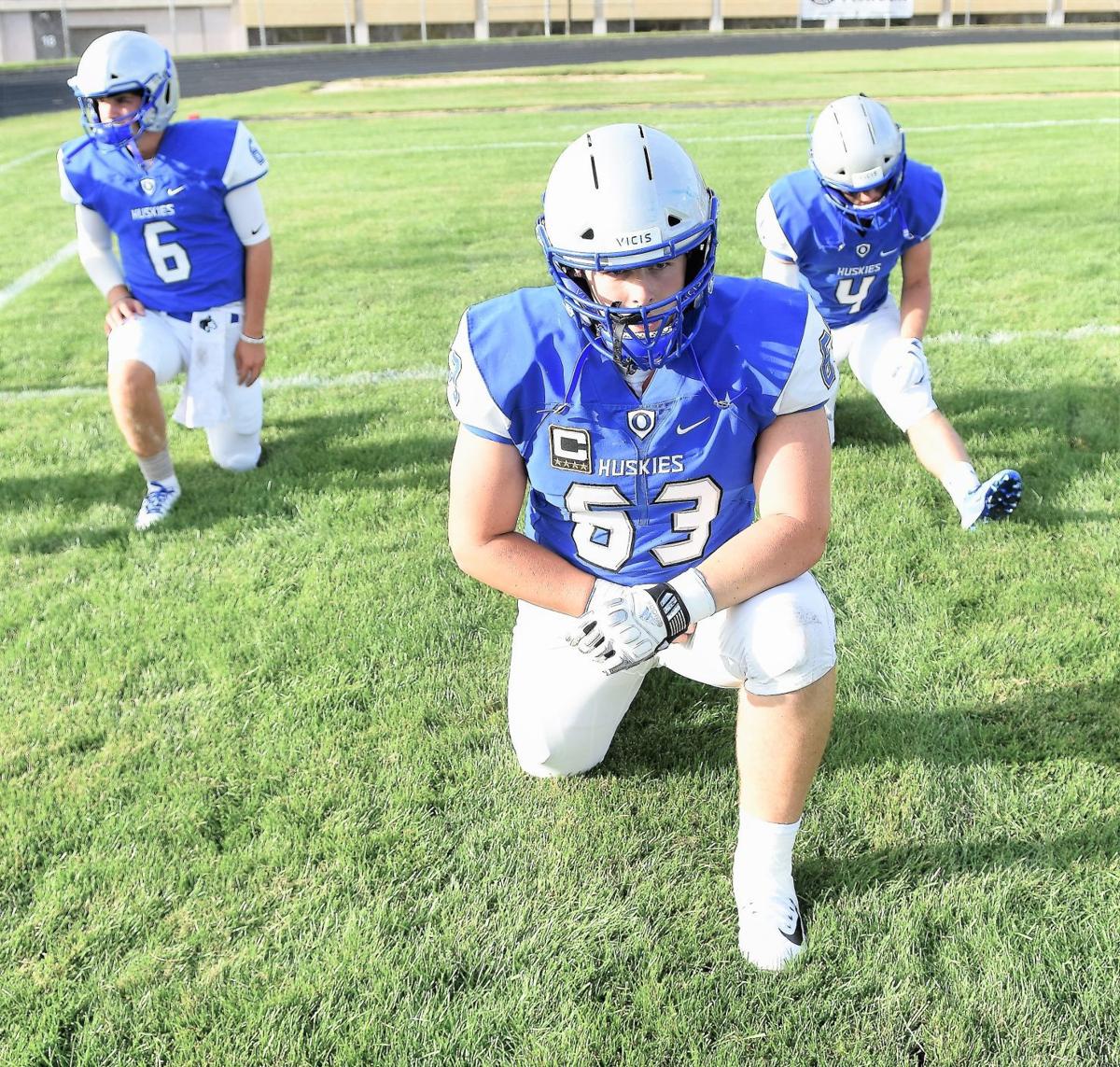 Owatonna senior, Zach Wiese (63), moved from guard and filled in for injured center Isaiah Noeldner for the entire regular season and was recently invited to play in the annual Minnesota Football Showcase all-star game in December. (Jon Weisbrod/People’s Press) 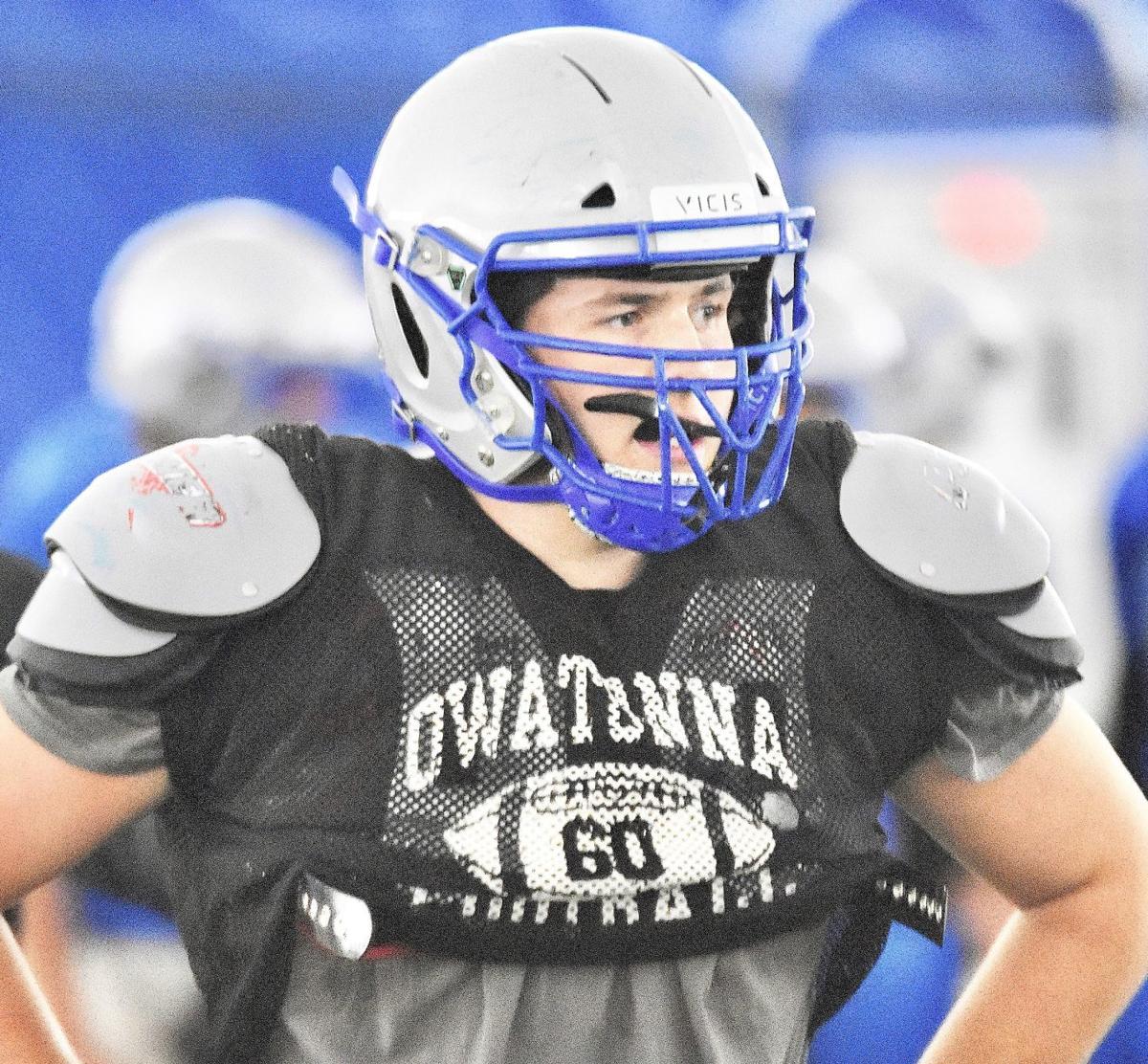 Zach Wiese is one of only a small handful of players to start on the offensive line as an underclassman for Owatonna, making his debut in Week 3 during the 2017 season and locking down the spot ever since. (Jon Weisbrod/People’s Press)

Owatonna senior, Zach Wiese (63), moved from guard and filled in for injured center Isaiah Noeldner for the entire regular season and was recently invited to play in the annual Minnesota Football Showcase all-star game in December. (Jon Weisbrod/People’s Press)

Zach Wiese is one of only a small handful of players to start on the offensive line as an underclassman for Owatonna, making his debut in Week 3 during the 2017 season and locking down the spot ever since. (Jon Weisbrod/People’s Press)

Stepping to the line of scrimmage last week during Owatonna’s game-opening drive against Rochester Century, Zach Wiese was back home, but something just didn’t feel right.

After spending the previous nine games a mere three feet to his left in the middle of the offensive line, the third-year starter returned to his natural position at guard as Isaiah Noeldner made his first start at center since spending the regular season recovering from a torn ACL suffered last winter.

Wiese was right where he belonged — and Owatonna’s offensive line was finally completely healthy for the first time all season — but that didn’t mean he was completely comfortable.

“I was really excited to get back to guard and have Noeldner back at center, but honestly it was a little weird going from center and then hopping back to guard,” Wiese said after practice on Wednesday night. “Right away, I was like ‘wow, this is really different.’ Because usually I don’t have a man up on me (at guard) and at center I usually did. I had to get used to it. Last week was the first game, and this week it will get easier.”

The fact that Wiese admits he felt slightly out of place at guard would have been an outlandish idea just 365 days ago. The 5-foot-11, 235-pound senior grew up playing the position and made a rare appearance as a regular underclassman starter for the Huskies as a sophomore. Since making his debut on Sept. 15, 2017 in the third offensive series against Austin on the road, Wiese has fastened one of the most decorated two-year runs in recent Owatonna football history for an offensive lineman.

In 2018, he started every game for the state champion Huskies and was named first-team all-district for his efforts as a powerful and nimble-footed guard. As the only returning starter from the season prior, Wiese also stepped into a leadership role and helped nurture three new starters last fall, including Noeldner.

“The second year I got everything under my belt and I was the only returning lineman with any real varsity experience besides Joe Edel — he had a few games,” Wiese said. “I felt like I had to step up my game and be a leader and show all these guys coming in their first year how we do this and how we are going to roll.”

Wiese was a huge factor in opening holes for record-setting tailback, Jason Williamson, and entered his final offseason with the Huskies as one of the most heralded interior linemen in all of Class 5A.

Having already displayed a great deal of versatility and intelligence — Wiese makes up for his lack of overwhelming size by often out-maneuvering and out-smarting his opponent — the senior was about to embrace perhaps the biggest challenge of his career. Noeldner had been diagnosed with a torn ACL in February and the coaching staff almost immediately reached out to Wiese about the potential of filling his spot.

“Coach was saying all summer ‘make sure you are taking snaps’ and I was like ‘OK, yeah’ and then the first day of team camp came and he put me at center and I was like ‘I guess I am really going to do this,’” Wiese said.

With only a couple weeks to adjust to his new surroundings during preseason practice, Wiese didn’t quite know what to expect as he made his first career start at center in Owatonna’s season-opening showdown against a big and bulky Rochester Century front line. Though there were some physical challenges that came along with playing the position — such as growing accustomed to lining up face-to-face with a nose guard — the largest hurdles Wiese needed to overcome were all between the ears. Playing center in Owatonna’s system requires a vast knowledge of defensive fronts and the ability to quickly diagnose pre-snap formations and communicate with the rest of the line.

“Mentally, the biggest challenge was learning all the fronts and formations,” Wiese said. “When I was at guard, I just listened to Noeldner and I knew what to do and then when I moved to center I was the one who had to know everything and know where everything is going.”

Relying on his innate high-level instincts to get by for the first couple of weeks before eventually growing more and more comfortable as the axis of the offensive line, Wiese said he actually started to enjoy his new role and had accepted that this might just be it. Though he was happy to hear about Noeldner’s positive progress during the final stages of his rehabilitation and was supportive the entire time, he was a center now, and began thinking like one. Calls at the line became a natural reaction and his blocking responsibilities — which were never a major issue — grew increasingly instinctual and required less pre-play diagnosis and thought.

“I actually did forget about the old guard days midway through the season,”Wiese said “I was thinking ‘man, I really like this. I actually pulled a lot as a center and that’s something you do a lot as a guard, so I really liked playing there. It felt natural.”

Wiese’s high level of play didn’t go unnoticed or under-utilized. Owatonna would often simply snap the ball and charge forward and ride behind him during short-yardage situations, almost always moving the chains in the process. When watching film on the Huskies, one of the major highlights is seeing Wiese drive his man off the line and finish by flattening him on his back.

It’s called a pancake, and to Wiese, they taste really, really good.

“The perfect pancake block, you don’t really know when it is going to happen,” Wiese said. “When you hit the guy and you are on top of them it’s like ‘alright, I just put you on the ground.’ It’s nice laying on top of the guy because I don’t have to do much more than just keep him down with my weight. It’s nice.”

Throughout the regular season, Wiese only built on his already strong reputation as a mauling blocker and was recently invited to play in the annual Minnesota Football Showcase All-Star Game on Dec. 7 at U.S. Bank Stadium, an honor reserved for only the best of the best in the senior class each year. All-District and all-state accolades are almost certainly to follow in the near future as well.

Wiese, though, still has a lot of business to take care of before his career with the Huskies is complete. Owatonna plays against No. 7-ranked St. Thomas Academy on Saturday night in the Class 5A state quarterfinals and OHS will face its greatest challenge of the season in the trenches. The Cadets are a massive team, averaging 6-foot-3 and 237 pounds up front and can rotate a number of fresh bodies on the defensive line.