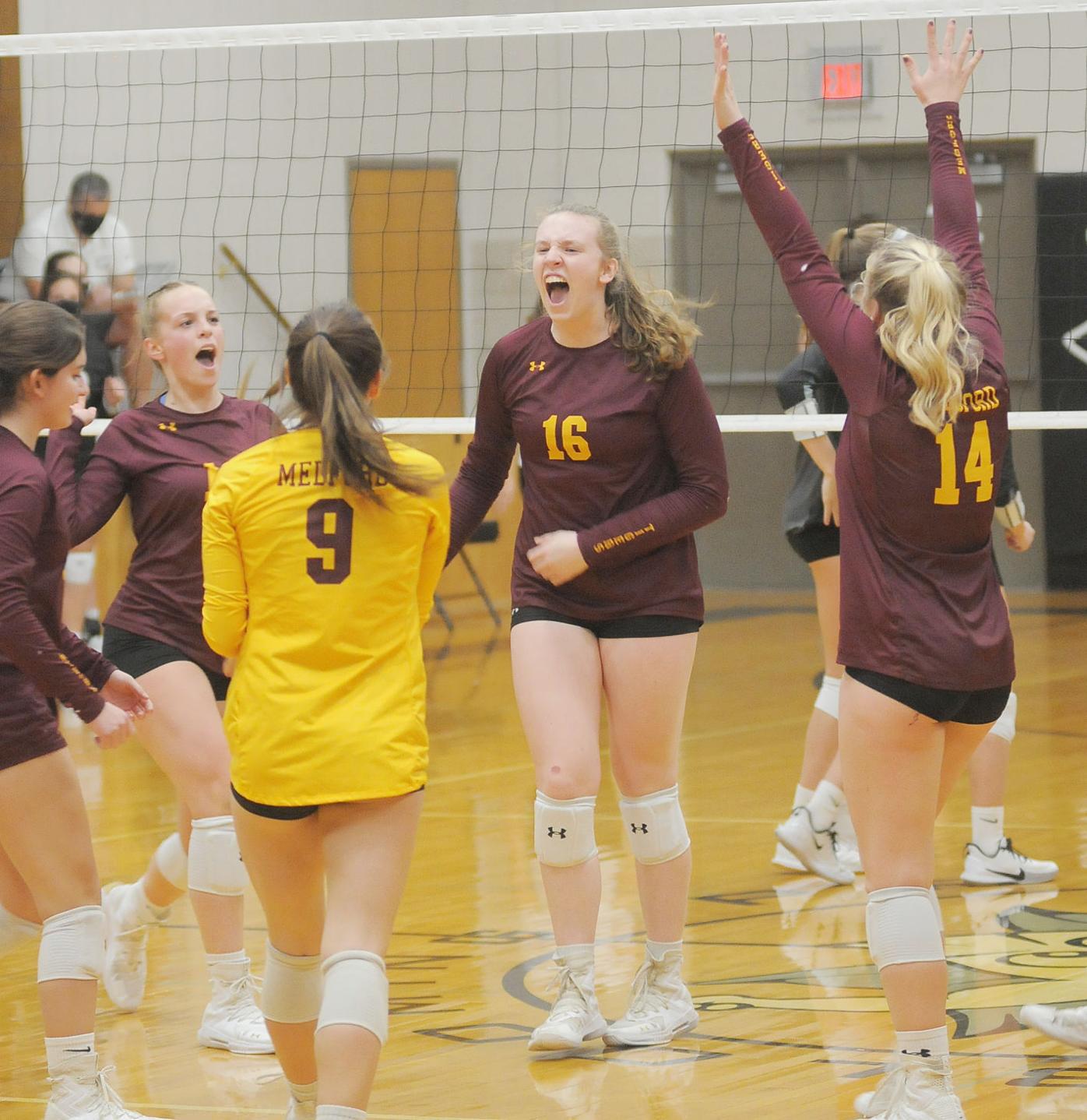 Medford senior Kinsey Cronin lets out a yell following a point against Blooming Prairie this season. Cronin is the Owatonna People’s Press Player of the Year following a tremendous career. (Nick Gerhardt/southernminn.com) 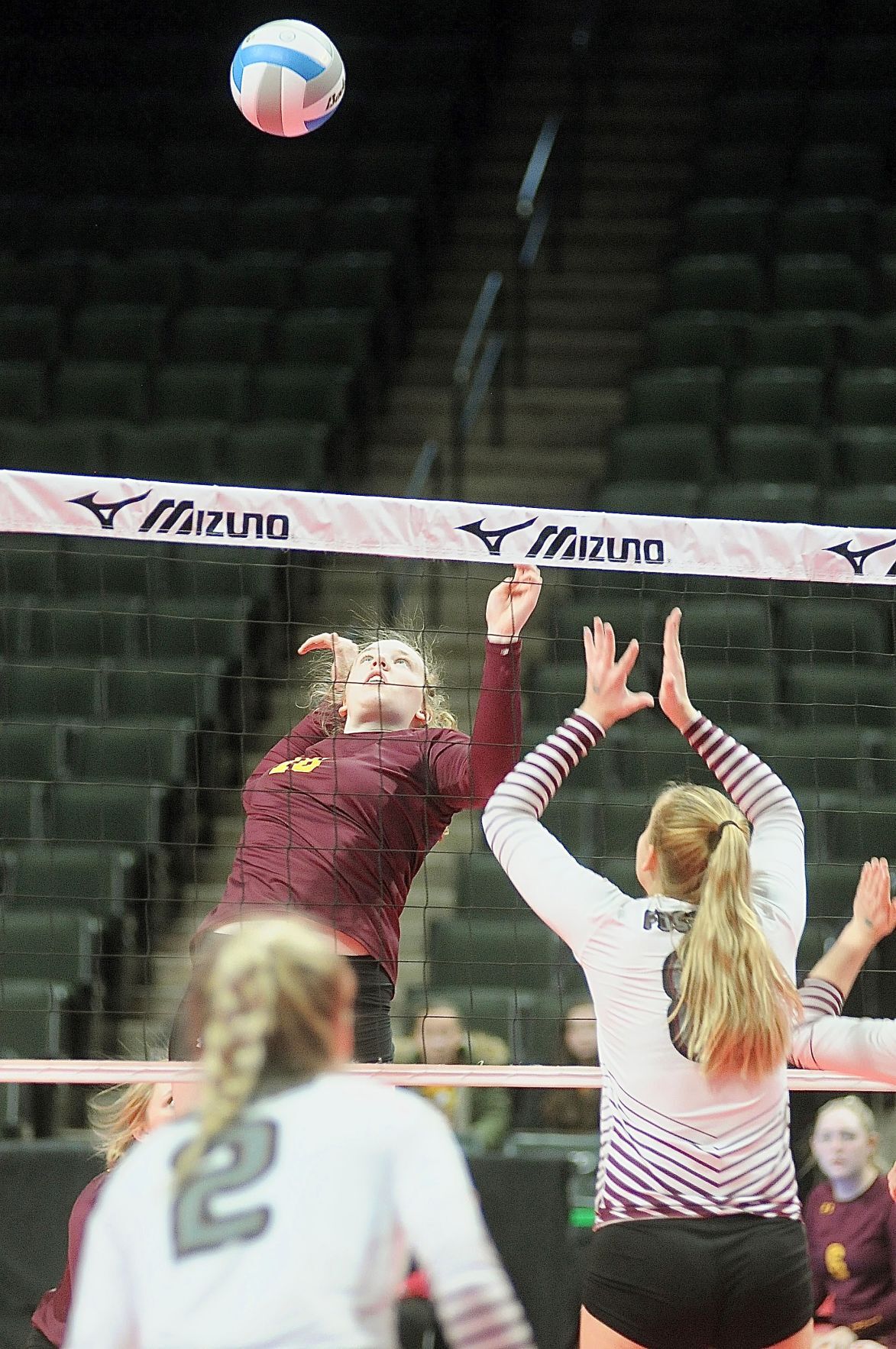 Medford middle hitter Kinsey Cronin goes up for an attack against Fosston in the 2019 Class A third-place game at Xcel Energy Center in St. Paul. Cronin finished with a team-high 17 kills in a 3-0 win and was named to the all-tournament team. (Nick Gerhardt/southernminn.com)

Medford senior Kinsey Cronin lets out a yell following a point against Blooming Prairie this season. Cronin is the Owatonna People’s Press Player of the Year following a tremendous career. (Nick Gerhardt/southernminn.com)

Medford middle hitter Kinsey Cronin goes up for an attack against Fosston in the 2019 Class A third-place game at Xcel Energy Center in St. Paul. Cronin finished with a team-high 17 kills in a 3-0 win and was named to the all-tournament team. (Nick Gerhardt/southernminn.com)

Medford’s Kinsey Cronin is rather reserved away from the volleyball court — measured and thoughtful when she speaks. On the court it’s a different story.

Whether it’s a boisterous yell to celebrate a point or the thud of one of her kills, it’s her way of leading the Tigers. Her ability, continued improvement and demeanor led to her being selected as this year’s Owatonna People’s Press All-Area Volleyball Player of the Year.

As Cronin’s play elevated, so did Medford’s. She played a key role as the team’s middle hitter since joining varsity as a freshman. Cronin and the Tigers reached the state tournament for the first time in school history her sophomore year. Not only that, the team advanced to the Class A championship game, where it fell to Minneota to end a 29-6 season. Along the way Medford defeated the reigning champion Mayer Lutheran as an unseeded team.

The Tigers earned a return trip to the state tournament her junior season where they finished third after getting defeated in the semifinals against conference rival Waterville-Elysian-Morristown, which also lost to Minneota in the title game. Medford defeated Fosston in the third-place match to finish with a 26-9 record.

Her play and the team’s rise have helped put Medford on the map and inspired more youth to take up the game.

“Just the number of players we have now going out for the sport has had a huge impact on the program,” Tigers head coach Missy Underdahl said. “They want to go state. They want to be selected to the all-state team and the all-tournament team. It’s almost driving them to that next level.”

Cronin recalls the send-off the team got before leaving for its first state tournament appearance when students and staff created a school-wide tunnel for the players to walk under.

Later, when the team took the court at the Xcel Energy Center in St. Paul for its first match they saw a sea of gold in the stands. The Minnesota State High School League even used an image of the Medford fans for one of its publications.

“Everybody was so proud of us that we had done it,” Cronin said. “The energy around it was so positive. It helped push us as players to strive for more.”

Cronin received an all-tournament selection her sophomore year and with it came rising confidence.

“It’s kind of crazy to look back at how different I was as a player and the team,” she said. “It was so great to be able to grow up with everyone I’ve played with through the years. As a team we grew our trust and being able to communicate on the court.”

The following season Cronin earned an all-state team selection to further solidify where she measured with others in the state.

In the final match of her career she reached 1,000 career kills after tallying 213 in 12 matches this season. She nearly matched her output from her sophomore season when she had 266 kills in 35 matches. She hit at a .484 clip this season in a sport where anything above .300 is considered excellent.

She finished her career with 1,013 kills, 167 digs and 215 blocks. Perhaps what stands out most from those numbers is her blocking. Cronin had a career-high 66 blocks as a junior in 35 matches. She nearly eclipsed that this season by finishing with 63. She outperformed her numbers as a freshman and a sophomore when she finished with 39 and 57, respectively.

“As a freshman I could not read a single hitter,” Cronin said. “It was very bad. Just the experience of having to play helped because I had to adapt quickly and I was able to do more of it. I can read players as they go up and read setters.”

Cronin’s transformation from a timid, unsure player to a dominating and respected force has impressed Underdahl.

“I think her confidence grew and that’s just carried her every year.”

While teammates have ducked out of the way of her hits in practice, they haven’t shied away from seeking her counsel. Cronin has freely shared her hitting tips to teammates to help them improve and that’s an important part of her lasting impact on the program.

“I’ve learned from my experiences,” she said. “I was proud that I could be that for my team, but I know I couldn’t be that without my teammates.”

Kinsey Cronin, Medford, senior MH — Cronin led all area players with 213 kills this season and surpassed 1,000 career kills in the final match of the season. She also had 63 solo blocks and 70 block assists while tallying 70 digs.

Jenna Berg, Medford, senior S — Berg led all area players with 391 assists and finished with 157 digs for the Tigers.

Ava Eitrheim, Owatonna, freshman RS — Finished second in kills for the Huskies with 59. Led the team with 26 block assists.

Isabel DeLeon, Medford, junior OH — DeLeon finished with 87 kills as she emerged as a lead outside option for the Tigers. She also added 124 digs and 37 block assists.