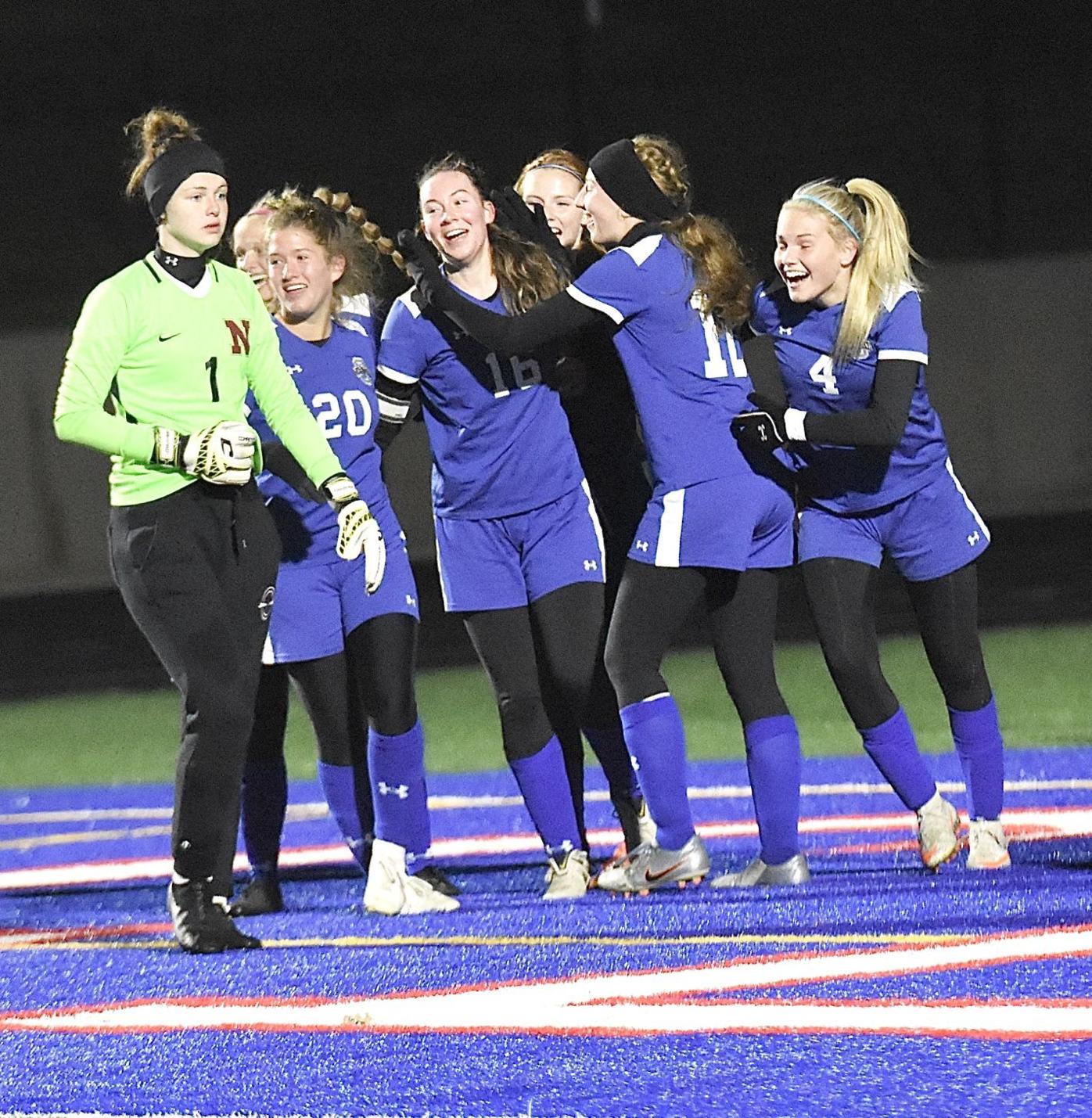 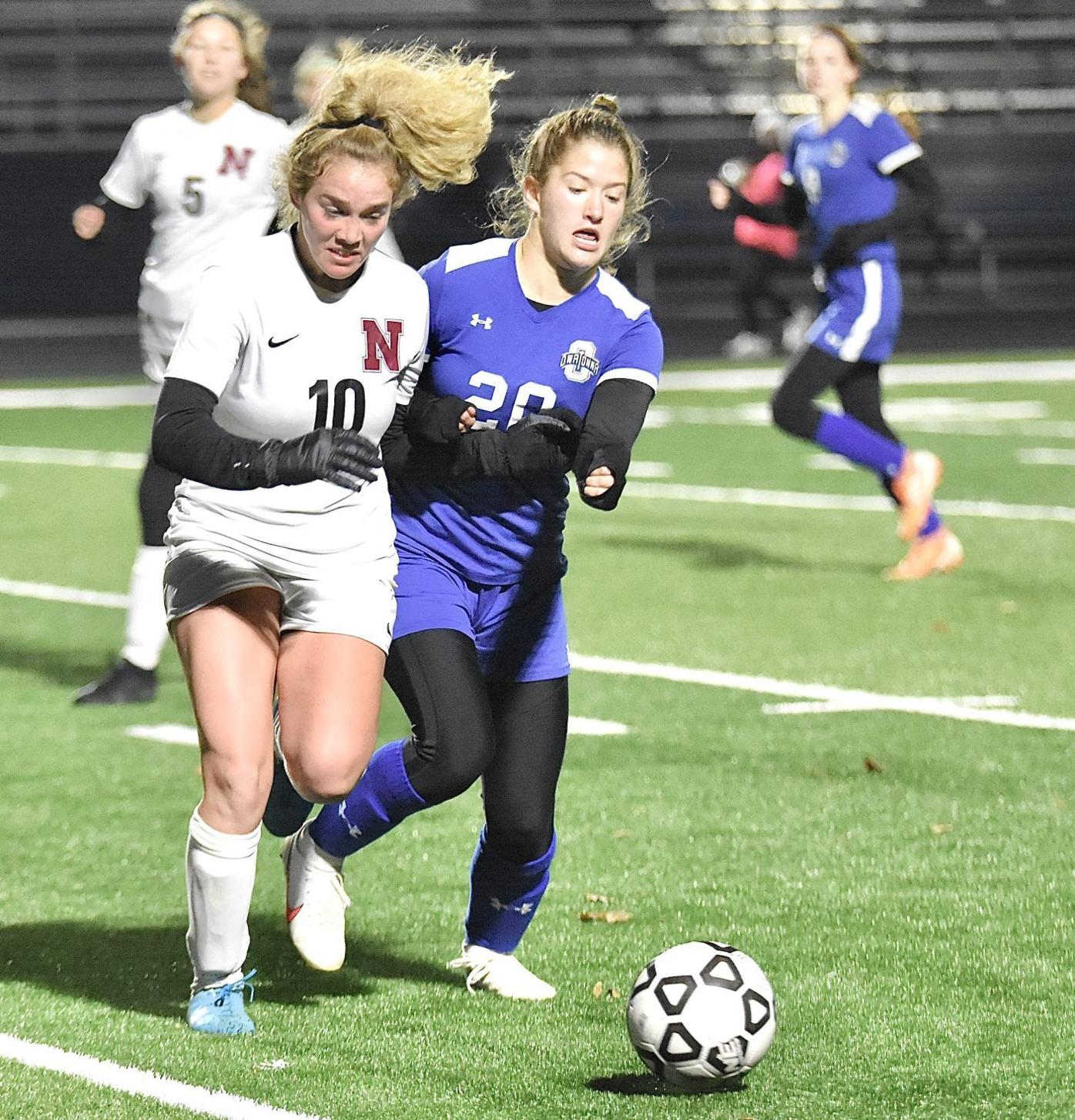 ALBERT LEA — There were so many things that could have defeated the Owatonna girls soccer team within a chaotic 24-hour period leading its Section 1-AA showdown against Northfield.

The Huskies, though, simply weren’t going to be denied.

Forced to play a “home” game a day later than originally expected and roughly 35 miles south of their actual home field, the OHS players were understandably upset when they discovered that their second-round postseason matchup wasn’t going to take place at the Owatonna Soccer Complex due to reasons completely out of their control.

Weather in Minnesota is just so unpredictable this time of year.

“They wanted to prove themselves on their home field,” OHS coach Nate Gendron said. “They were definitely disappointed.”

Holding out until the last possible moment, the Owatonna activities department eventually decided that the natural grass of the Huskies’ home pitch simply wasn’t going to be an option after three inches of snow had been dumped on the region on Tuesday afternoon. Ultimately, the team was granted permission to move the game to the artificial turf of Jim Gustafson Stadium in Albert Lea and kick things off at 8:15 p.m. on Wednesday night.

As tough as the last-minute change in venue was to swallow, the game itself would offer an even greater obstacle as the Huskies’ found themselves on the brink of elimination during a chilly autumn night at the Hammer Sports Complex.

Forced to play from behind less than two minutes into the first half and trailing by a single goal at the break for the second consecutive postseason contest, Owatonna quickly leveled the score in the second half, slowly began to take over the game down the stretch and eventually pulled off a heart-pounding 3-2 victory in sudden-death overtime when Anna Herzog crashed the net and buried the game-winning goal from in close with less than 90 seconds on the clock.

The thrilling victory elevated the Huskies (9-2-1) to their first section title game in 15 years and extends their undefeated streak to nine games. With the state tournament having been preemptively cancelled due to concerns over the spread of COVID-19, second-seeded Owatonna will take on the winner of No. 5 Farmington and No. 8 Lakeville South on Saturday afternoon at 3 p.m. at the Owatonna Soccer Complex in the final game of the season for both teams.

Ironically, the only non-victory for the Huskies during its current hot streak, which was triggered by a 9-1 blowout of Austin on Saturday, Sept. 12, occurred when they played to a 3-3 draw against the Raiders after leading by two goals in the second half. So, as the final seconds dripped off the clock during the 5-minite break just before to the overtime session on Wednesday, Gendron wasn’t shy about reminding his players of what took place last time they met their budding rivals during a physical regular season showdown on Sept. 24 in Owatonna.

And the girls? They were focused. The opportunity was right in front of them, and all they needed to do was continue playing their game and the rest would fall into place.

“They didn’t panic,” Gendron said of his team’s mindset entering the overtime session. “I told them this is our time now. When we played (Northfield) last time, they came back from 3-1 to tie the game and that was their show, but this is our time, and they took that to heart. I looked at our seniors and said: ‘We are not done.’”

Appropriately, it was one of the Huskies’ veteran captains who registered what will undoubtedly be remembered as one of the most dramatic goals in recent OHS soccer history. After Owatonna took control of the ball just beyond midfield, it eventually found its way to the feet of Ari Shornock, who gently tapped it from left-to-right toward a pair of attacking blue jerseys from deep inside the box.

One of them was Herzog.

As the ball slowly rolled in front of her, the senior kept her momentum moving forward and didn’t hesitate when she got into position, striking a shot past Northfield’s backup goalie, Jordie Detlie, that crashed into the back of the net. The Raiders’ veteran keeper, Mariana Rosas-Arenas, was forced to exit the game roughly two minutes prior after being looked at by the training staff following a collision on front of the net and limping off the field with 3:19 on the clock.

“It’s like we drew it up,” Gendron said of the game-deciding goal. “Ari had a great cross, but it started by us winning the 50-50 out of the air, which we weren’t doing in the first half and that’s something we definitely talked at halftime. We talked about how we need to win the ball in the air and funnel it through our feet, and that came through in the second half and overtime. It started with the last goal. We won it in the middle of the field, we had a quick transition to the outside and Ari had a beautiful ball in.”

The action leading up to Herzog’s exhilarating game-winning goal started with a bang after Northfield’s Maddie Smisek scored exactly 1 minute, 30 seconds after the opening whistle.

Owatonna didn’t waste much time in countering and leveled the score when sophomore sensation, Ezra Oien, converted the first of her two goals on a direct pass from Emelia Marks on a corner kick at 30:20.

And then it was the Raiders turn to answer, snatching a 2-1 advantage when Ava Stanchina, who is also just a sophomore, buried a wide-open shot after the ball hopped behind OHS keeper, Greta Korbel, at the 23:31 mark.

Neither team scored for the remainder of the half and the Huskies found themselves trailing by a single goal for the second consecutive do-or-die contest.

“They were pretty down,” admitted Gendron. “But the girls just kept on going. We didn’t change our formation. We stayed true to who are and in the second half we got things going.”

Buoyed by Oien’s second goal less than three minutes into the stanza, OHS dictated the majority of the tempo for the remaining 36 minutes of regulation and had seized full control of the action by the extra session, severely tilting the field in its favor and drawing audible groans from the crowd after a few close calls down the stretch.

“You could tell from the kickoff in overtime, we wanted it,” Gendron said. “We didn’t even really say much in the break. We made a few key subs and put Hillary (Haarstad) on the outside and we subbed a few players out that normally start for us, but we had to think offensively, and that means putting in Abby (Vetsch), and that’s putting in Hillary and some of our senior vets that usually start and they realized that — it’s team first.”

The goal was the seventh of the season for Herzog and her fourth in the last four games.

For Oien, Thursday marked her fourth multi-goal game of the season and first since converting a pair of shots against Rochester John Marshall on Sept. 22. On the season, she has tallied a team-high 15 goals to go with three assists.

Note: Advance ticket sales will be restricted to families of the players and coaches only. No general admission will be permitted.