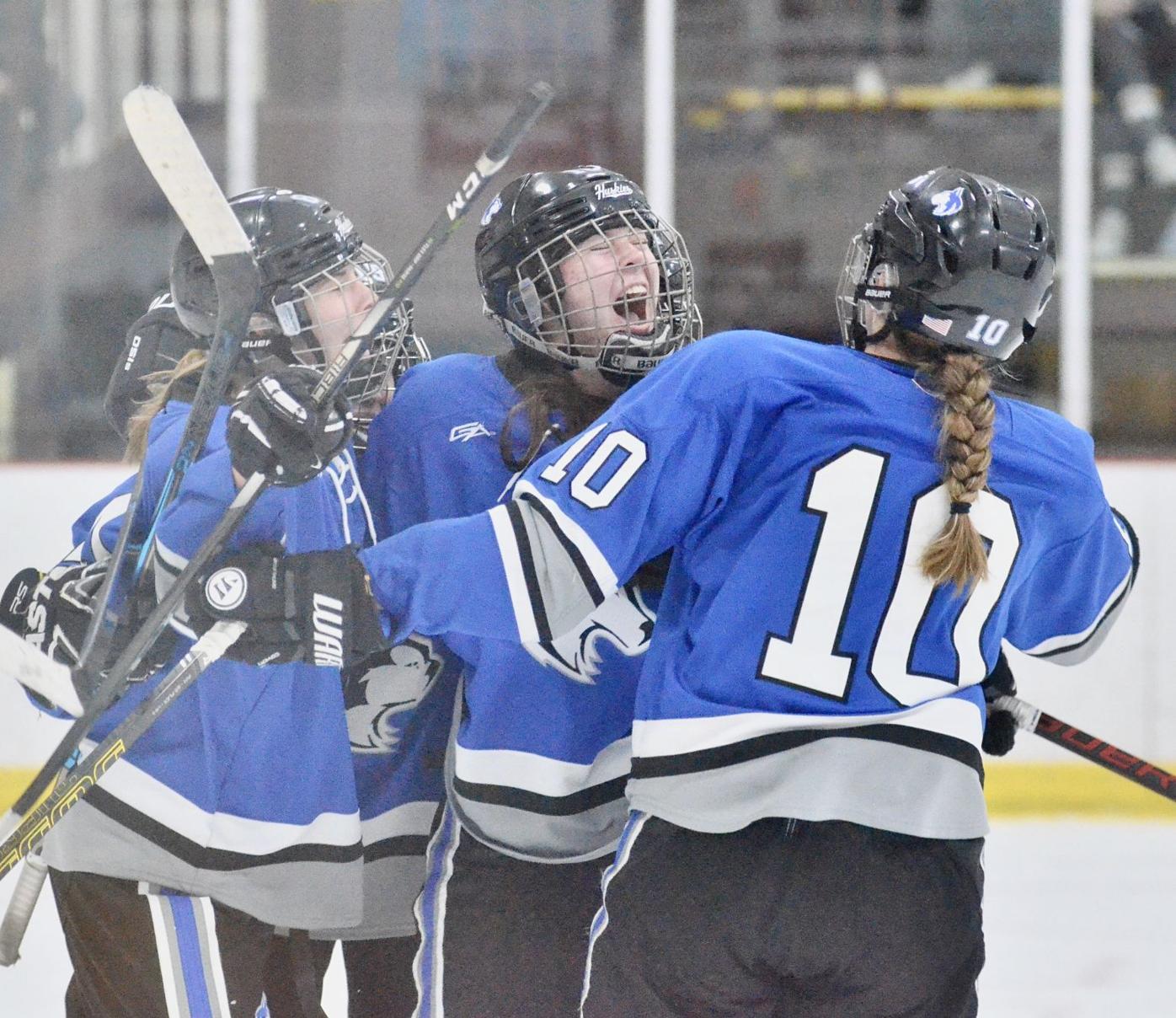 Members of the Owatonna girls hockey team celebrate after Anna Herzog’s game-winning goal in overtime against Northfield in a Big Nine Conference contest. Based on the Huskies’ 2-1 victory, the two teams will share the conference championship with 38 points. (Michael Hughes/southernminn.com) 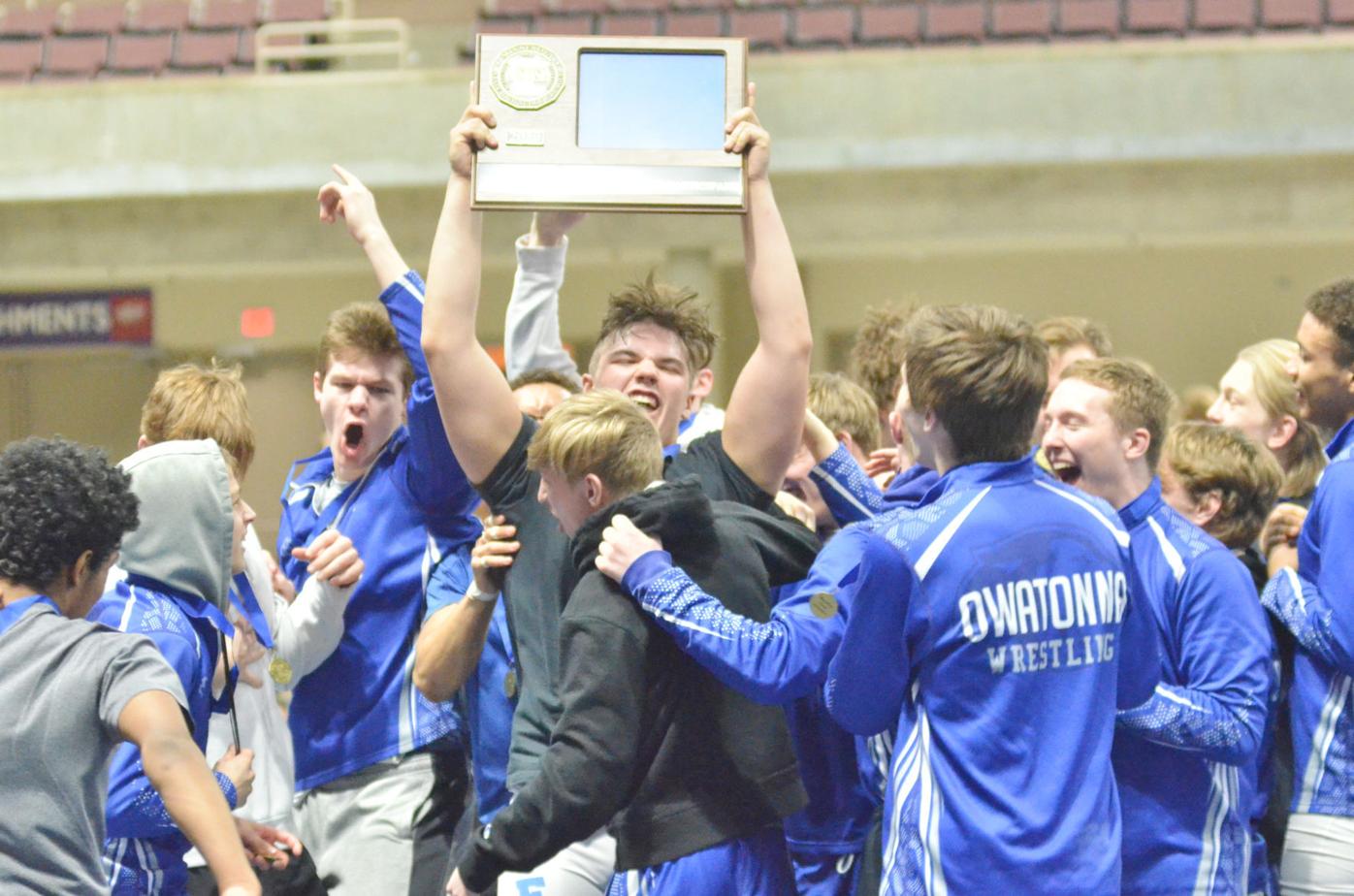 Owatonna’s Isaiah Noeldner hoists the Section 1AAA trophy over his head after a 28-27 victory against Northfield at the Rochester Civic Center. Noeldner sealed with a fall in the 285-pound weight class. (Michael Hughes/southernminn.com) 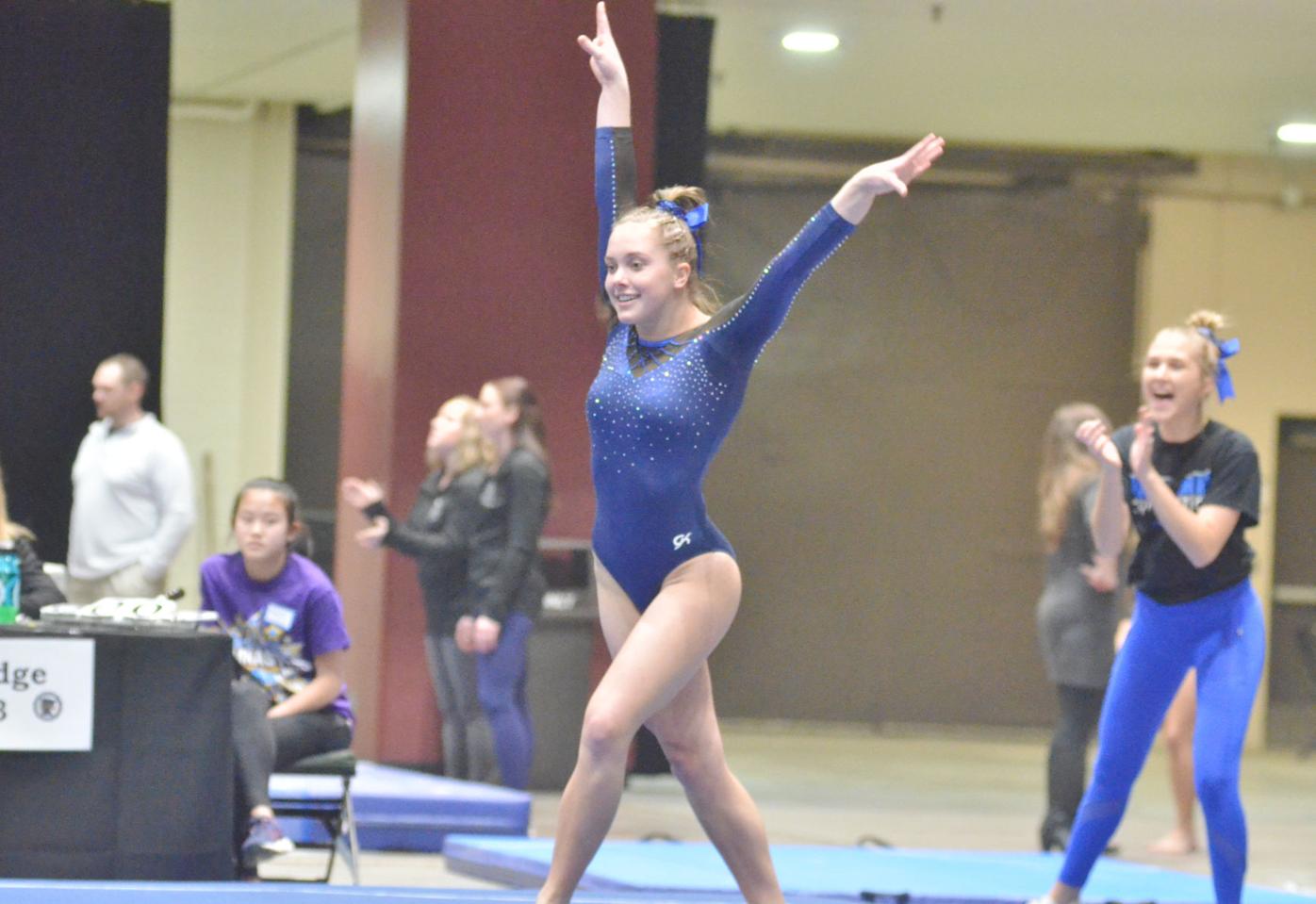 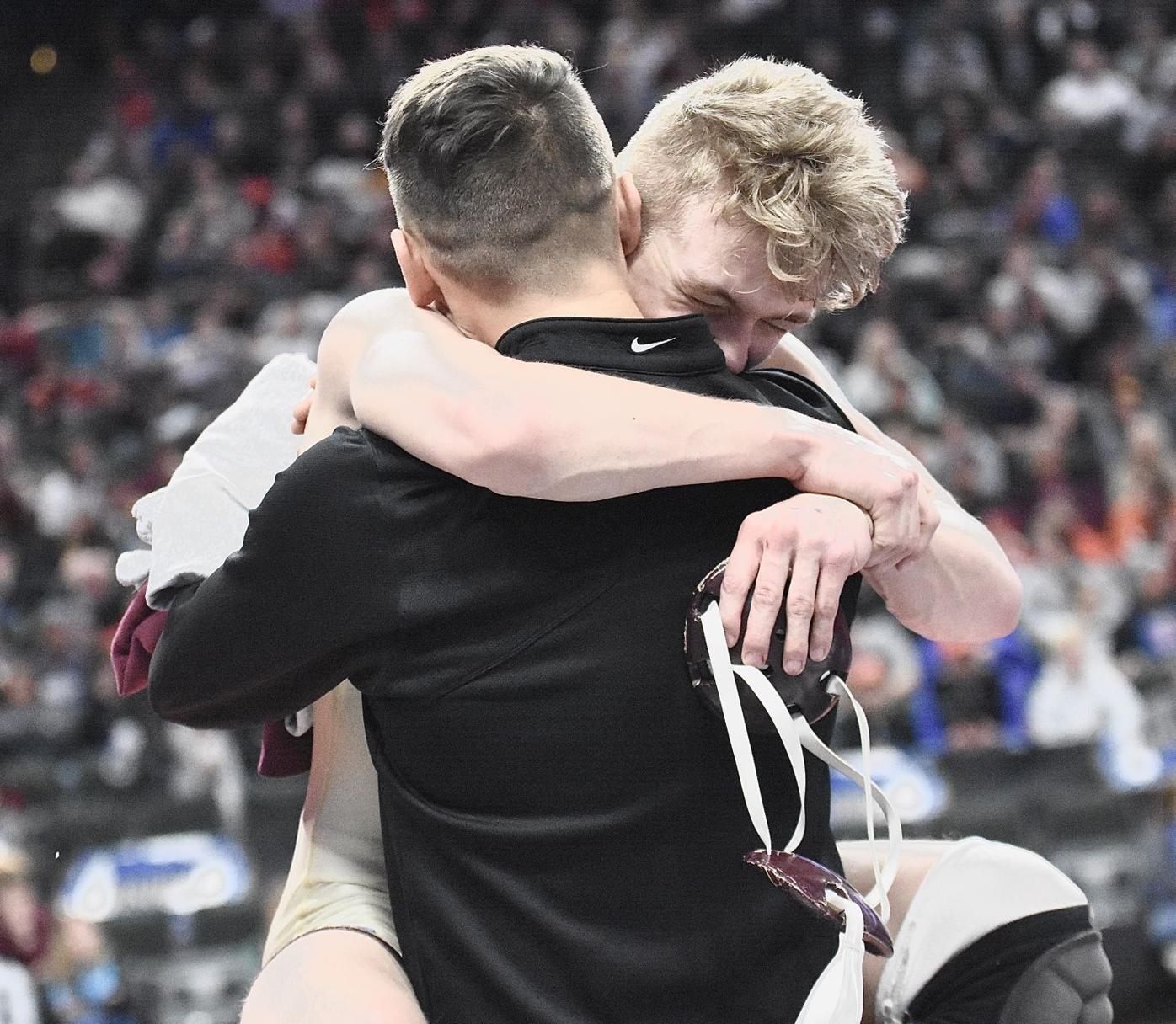 Medford's Willie VonRuden embraces his older brother, Nick VonRuden, after defeating Jordan Lohse in the Class A state championship match at 152 pounds. After nearly stepping away from the sport due to lingering injuries, the senior decided to stick with it and ultimately captured his first state championship after finishing third and second in his last two trips to the Xcel Energy Center St. Paul. (File Photo/southernminn.com) 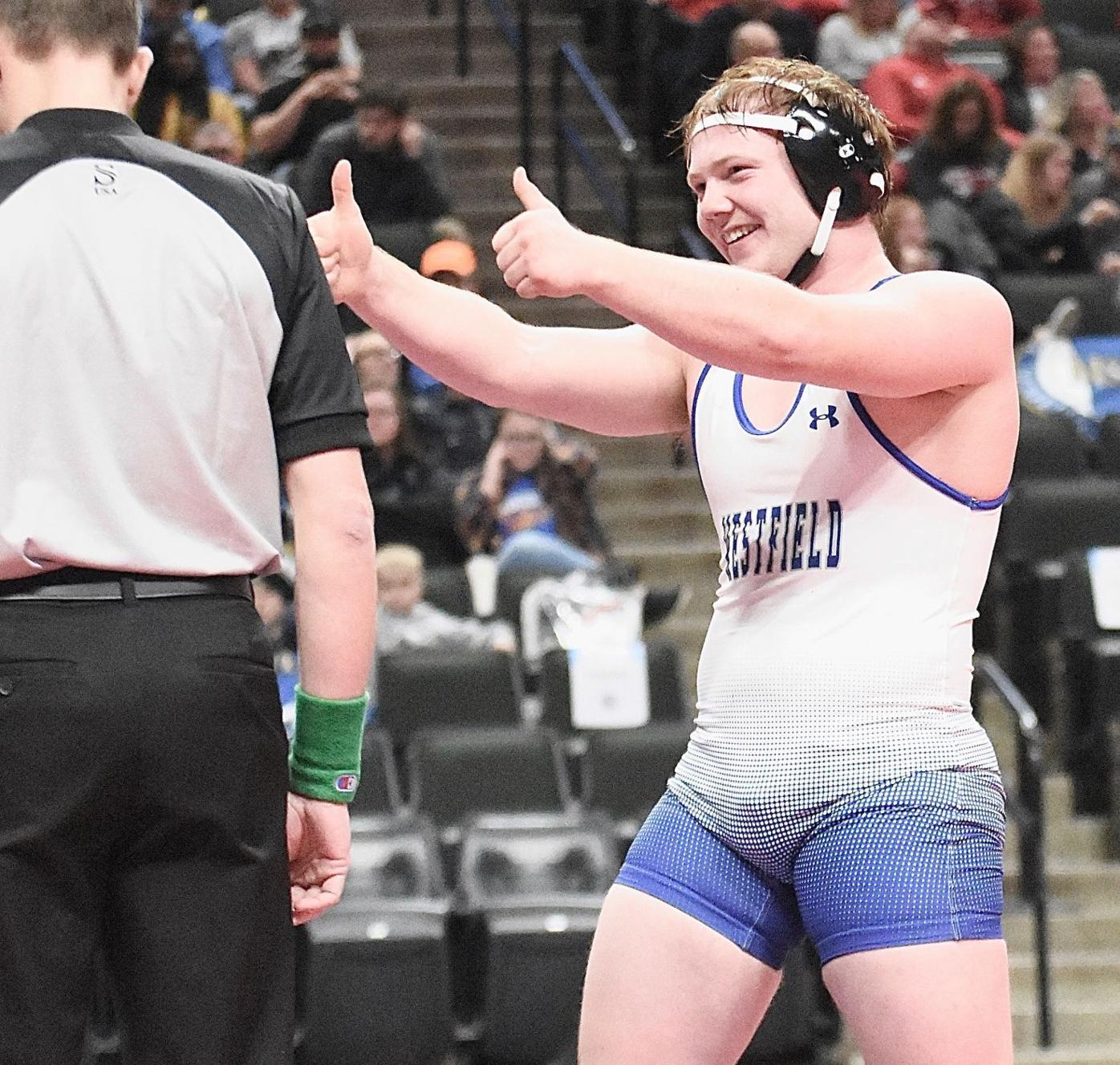 Blooming Prairie’s Colton Krell gives the thumbs up to his coaches after defeating Luke Tweeton of Frazee in the 195-pound, Class A state championship match. Krell became the first athlete in the school’s history to win a state wrestling title. (Jon Weisbrod/People’s Press) 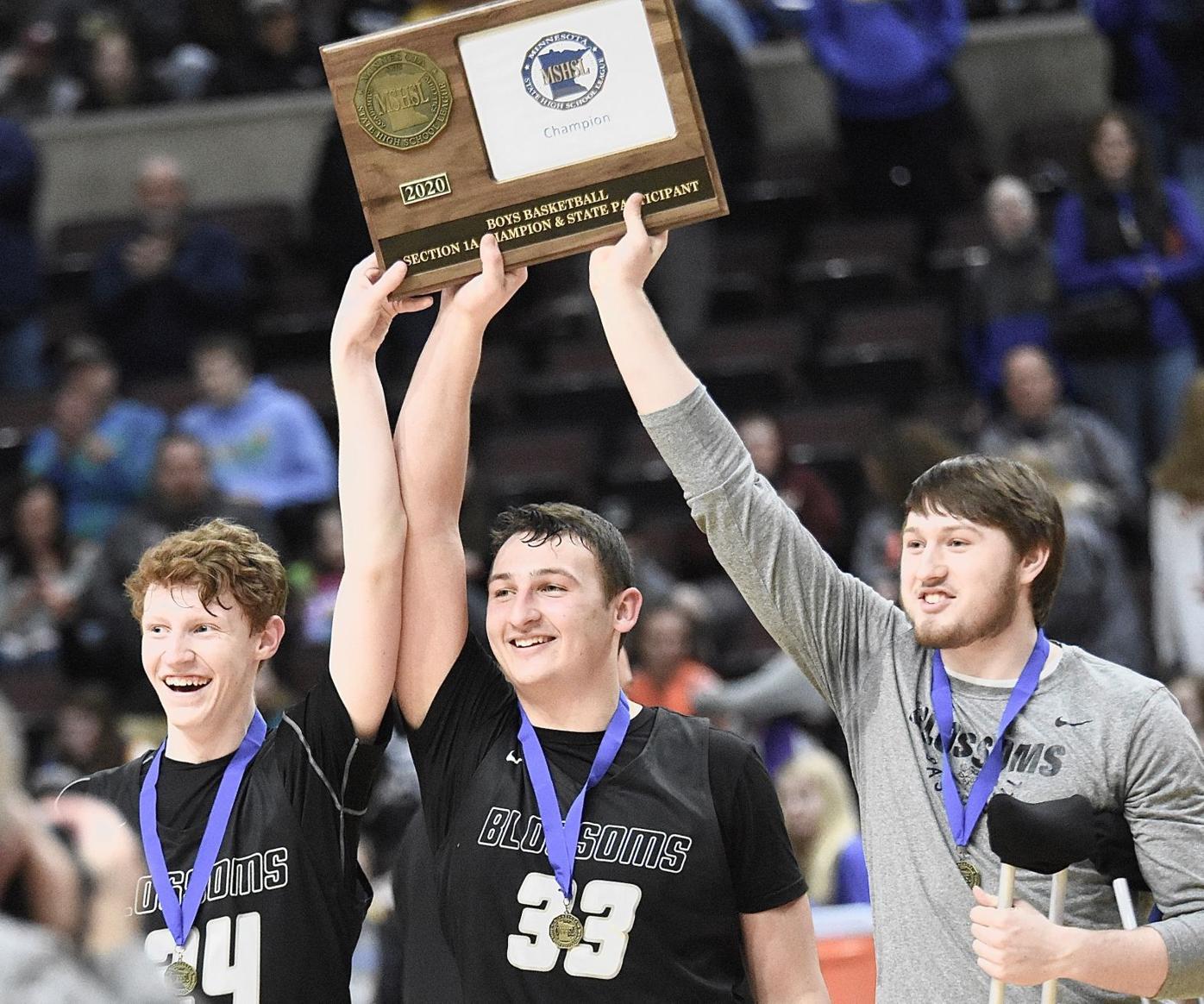 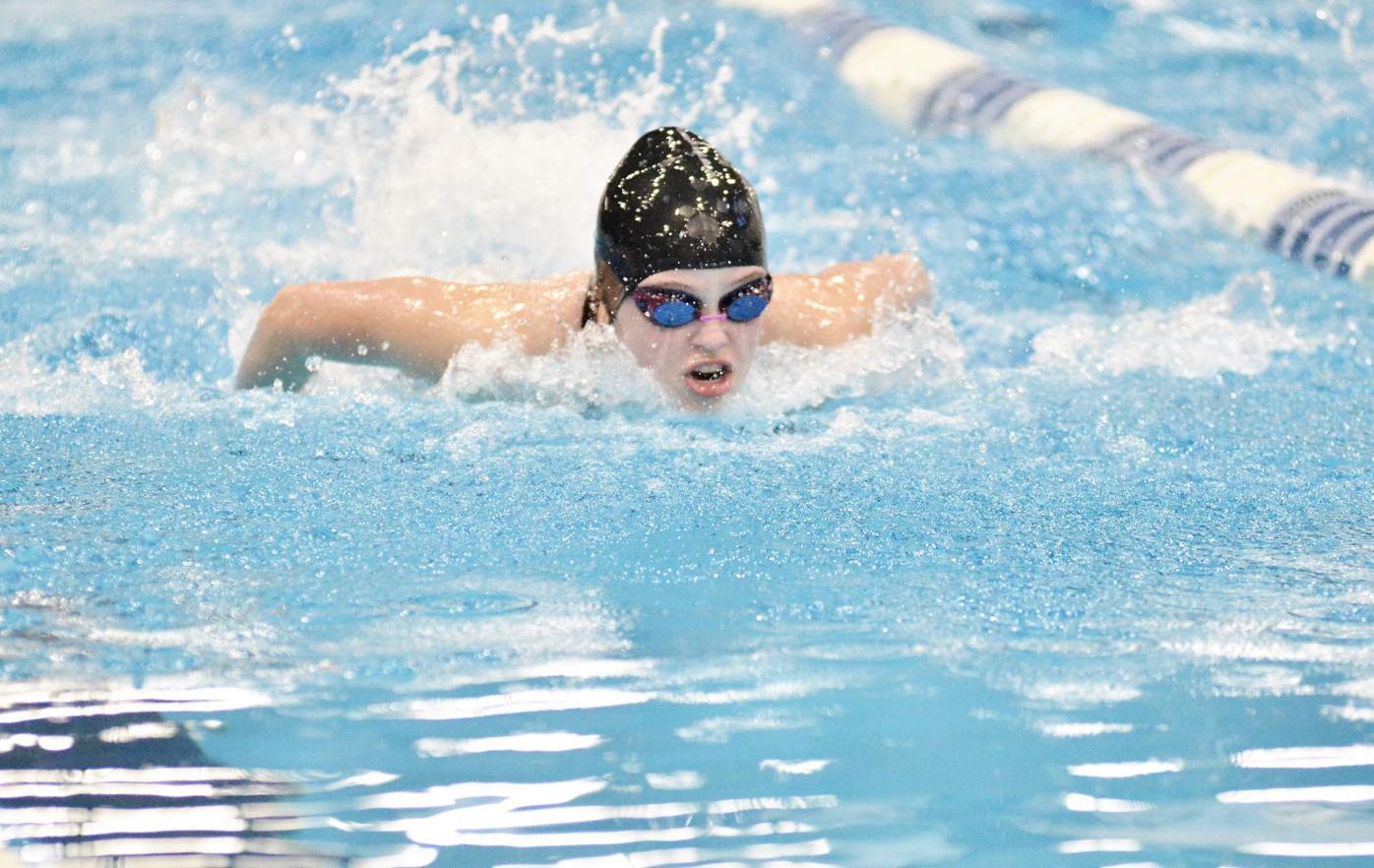 Members of the Owatonna football team pose for a photo following the team’s 30-28 victory over Rochester Mayo at Owatonna High School. The Huskies won their fifth straight Section 1-5A title. (Nick Gerhardt/Southernminn.com) 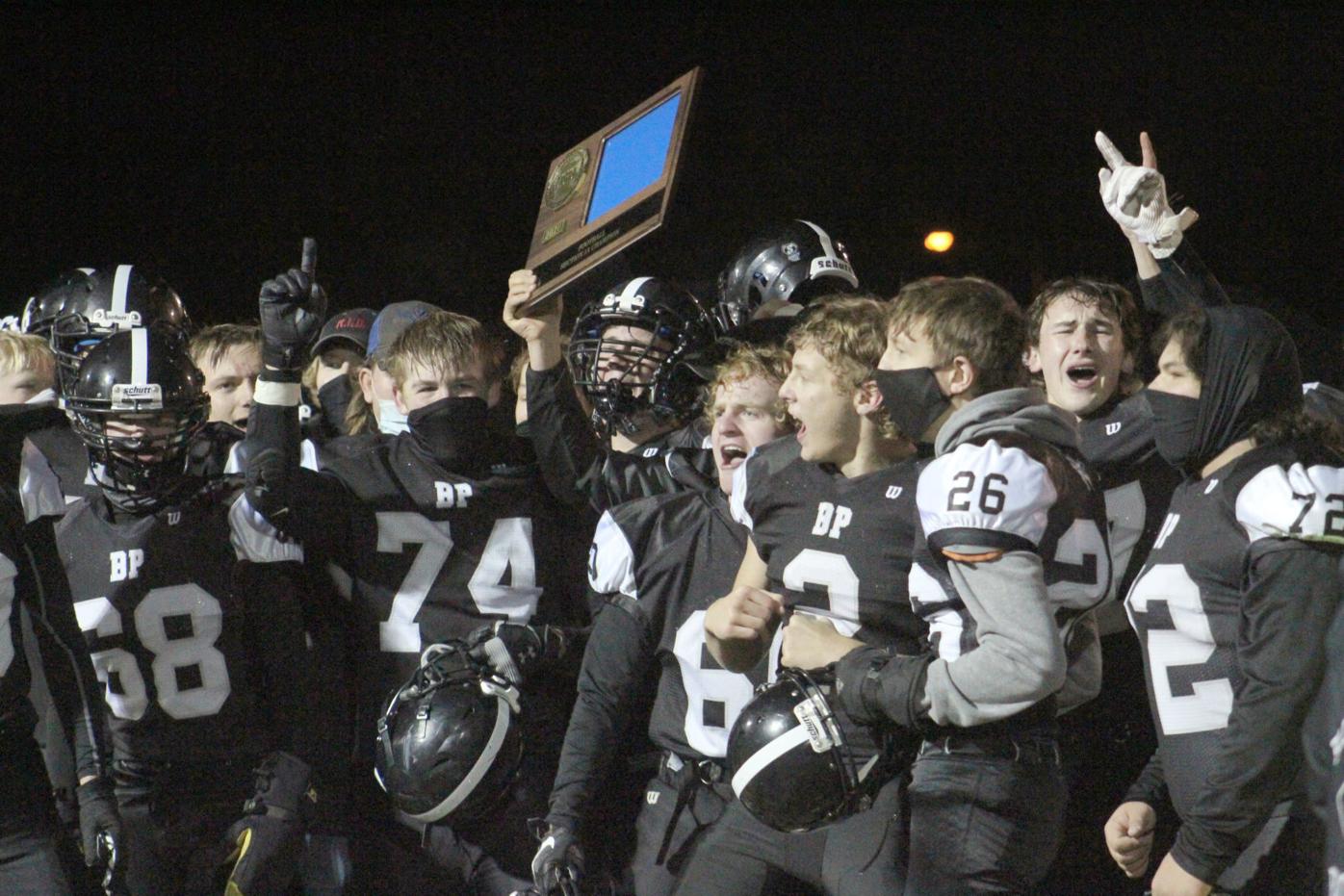 The Blooming Prairie football team celebrates winning the Section 1A championship against Randolph in Blooming Prairie. It’s the third consecutive section crown for the Awesome Blossoms, and wrapped up the second straight undefeated season. (File Photo/southernminn.com)

The past calendar year in sports for the Owatonna People's Press coverage area featured triumphant victories to extend longtime reigns, other instances in which local teams pulled off historic triumphs to put their programs in positions they had rarely been before and some in which those chances at history were taken away by forces beyond their control.

These last 12 months also included standout individual performances that placed local athletes at the top of their sport on a statewide level, and shifts in the local sports landscape that will commence later in 2021.

Listed below is a brief recounting of 10 of those memorable stories, listed chronologically in the order they occurred, and links to delve deeper into these key moments.

Owatonna girls hockey knew the path to any regular season glory was going to run through Northfield — and that road reached its literal apex Jan. 30 at the Northfield Ice Arena.

And when it came time for the Huskies to make a move, they didn’t hesitate.

After her team erased an early one-goal deficit by leveling the score in the middle of the second period, Owatonna’s Anna Herzog attacked the net after a deep shot from teammate Grace Wolfe and flipped a rebound past NHS goalie Maggie Malecha at the 5:29-mark of overtime to lift Owatonna to a 2-1 victory.

The electrifying win capped a wildly-successful regular season campaign and gives the Huskies 38 league points — and more importantly — a share of the Big Nine Conference championship.

It was Owatonna’s first conference title since the 2010-11 season and Northfield’s second in a row. The outcome also ended the Raiders’ long conference winning streak that spanned the equivalent of two full seasons.

You can read the full story from the dramatic overtime victory here.

The Medford girls basketball team proved it’s not how you start — or even how you perform in the middle — that matters.

It’s all about the finish.

Dropping to third place in the Gopher Conference after the first set of games and heading into the second half of the campaign with a 5-2 league record, the Tigers won each of their final seven conference contests, got a little help along the way and won a pair of key matchups down the stretch to claim their share of the title, taking down Blooming Prairie 61-51 on Feb. 14.

The championship, which was shared with W-E-M, is the fourth in program history and came a year after the Tigers finished the regular season undefeated and alone atop the league standings for the first time since 2003 when they won the former North Division of the Gopher Conference.

You can read the full story of Medford's victory against Blooming Prairie to win a share of the conference here.

The Owatonna senior strutted onto the mat for the final match Feb. 15 at the Section 1AAA wrestling championship against Northfield at the Rochester Civic Center, and the Huskies were trailing by five points.

To put it matter of factly, he needed to pin Northfield’s Nick Lopez. After two periods of Lopez staving off Noeldner, he finally caved with one minute, 10 seconds remaining in the match to ignite a raucous Husky celebration on the bench and into the stands due to third-seeded Owatonna upsetting top-seeded Northfield 28-27.

“I got a little nervous,” Noeldner said. “but I got that extra spike of adrenaline and that little voice in my head was saying, ‘The team needs this or our season’s over.’”

You can read the full story of the Huskies reclaiming the section title here.

While competing on the uneven bars, her last event at Roy Wilkins Auditorium in St. Paul, one of the four judges was so focused on the intricacies of Bangs’ routine that she nearly forgot to write anything down on her scoresheet, she later told Owatonna coach Evan Moe.

“She just sat there and watched and almost forgot to write stuff down because it was just such a nice routine,” Moe said. “Hearing stuff like that always makes you feel good.”

That performance on the bars wrapped up a fourth-place finish in the all-around competition — her fourth straight trip to the all-around podium after snagging third last year, fifth as a freshman and fourth as an eighth-grader. She scored a 38.1375, highlighted by a 9.550 on the bars (fourth overall) and a 9.650 on the vault (sixth overall).

“I think it went really well,” Bangs said. “I got my season-high score, so I’m really happy about that.”

You can read to full story of Bangs' performance at the state gymnastics meet here.

Though it would ultimately prove to be an unceremonious end to what was a monumental season, no one can take away what the Blooming Prairie boys basketball team accomplished on March 12.

Jumping the broad shoulders of its 6-foot-4, 250-pound forward Gabe Hagen for the game’s first 20 minutes before looking to a cast of characters to help keep second-seeded Hayfield at a safe distance in the second half, the top-seeded Awesome Blossoms snapped a 54-year section championship drought with a 59-51 victory at the Mayo Civic Arena in downtown Rochester.

“It feels amazing to go down in history,” said Hagen, who morphed into an unstoppable force around the basket and scored all 23 of his points in the game’s first 22 minutes. “It’s crazy to think about, but it’s awesome.”

Due to the increased concern over the spread of COVID-19, the MSHSL announced March 13 that all remaining winter activities would be cancelled, effective immediately. This, of course, included the Class A state boys basketball tournament that was scheduled to begin Thursday, March 19 and run through Saturday, March 21.

You can read the full story of Blooming Prairie's first section title in 54 years here.

Gopher Conference members voted May 6 to accept the applications of four new members to join the conference for the 2021-22 school year.

Randolph and J-W-P were former members of the league while Kenyon-Wanamingo and Triton, which is located in Dodge Center, will move from the Hiawatha Valley League. Randolph will shift from the Southeast Conference and J-W-P from the Valley Conference.

You can catch up on the details on what led to the Gopher Conference's expansion here.

The placards that display Owatonna High School swimming and diving records hanging on the walls above the pool might need to be switched to erasable whiteboards in any event that Logan Norrid decides to participate.

It would probably just be easier that way.

Adding another two historical marks to her personal ledger, Norrid established new OHS standards in 200-yard freestyle and 100-yard breaststroke on Aug. 27, giving her four school records overall — all of which have been attained in the 10 months. In 2019, she posted the program’s fastest times in the 100-yard butterfly (57.68) and the 200-yard IM (2:10).

“It was an exciting meet,” OHS head coach Isaiah Fuller said of the Owatonna’s loss to Rochester John Marshall. “The girls did a great job and Logan swam very, very well with no visiting team (in the building).”

You can read all the details from Norrid's record-breaking meet here.

The winds of good fortune were at the backs of the Huskies.

With the prevailing wind from the south blowing into the face of Rochester Mayo’s punter Kyle Doppler, the snap on a fourth-and-6 from the Spartans’ 14-yard line sailed over his head and through the back of the end zone with 4 minutes, 35 seconds left to play to put Owatonna ahead 30-28.

The No. 10-ranked Huskies turned to their defense once more to wrap up the Section 1AAAAA title Nov. 17 at Owatonna High School.

The Owatonna defense delivered like it has much of the season albeit through unusual circumstances to preserve the 30-28 victory.

“Something I’ll never forget,” Owatonna senior quarterback Brayden Truelson said. “I know these guys will never forget, given the circumstances we went through this year. It’s super cool to end it this way.”

You can read the full story from Owatonna's victory in the Section 1-5A title game here.

The defending Class A state champions did something that hadn’t happened in school history. With a resounding 49-6 win against Randolph on Nov. 20, Blooming Prairie secured its third consecutive section title.

Even before the most recent pause on high school sports, the goal was to end the season with a win. It may not have been to defend and repeat as state champions, but it still means a lot to finish the season with a section title.

“Right now it hasn’t fully hit me yet,” Awesome Blossoms senior Mitchell Fiebiger said. “Right now we’re just waiting for Monday’s practice. This was definitely more important with the aspect of we couldn’t play any more games. We knew had to come out and win it.”

You can read the details from BP's section title here.