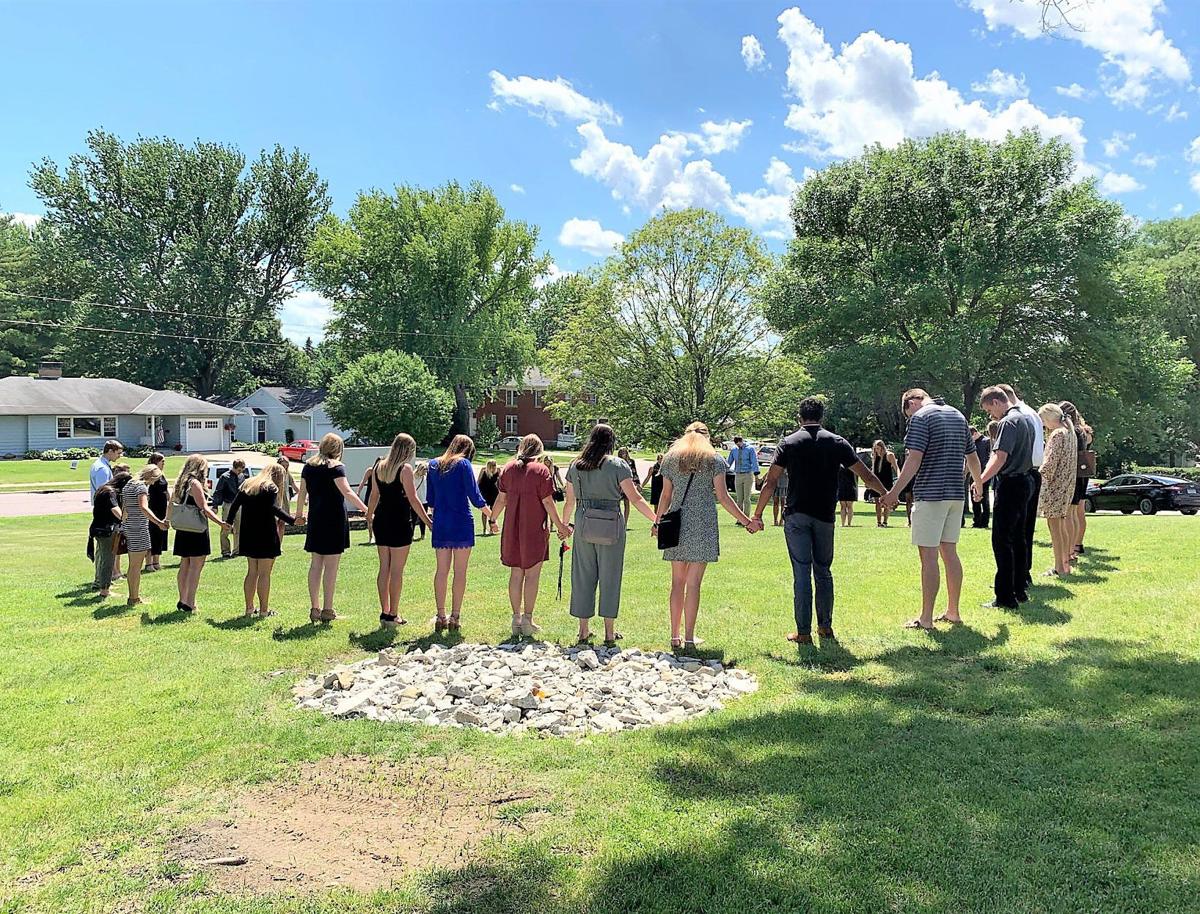 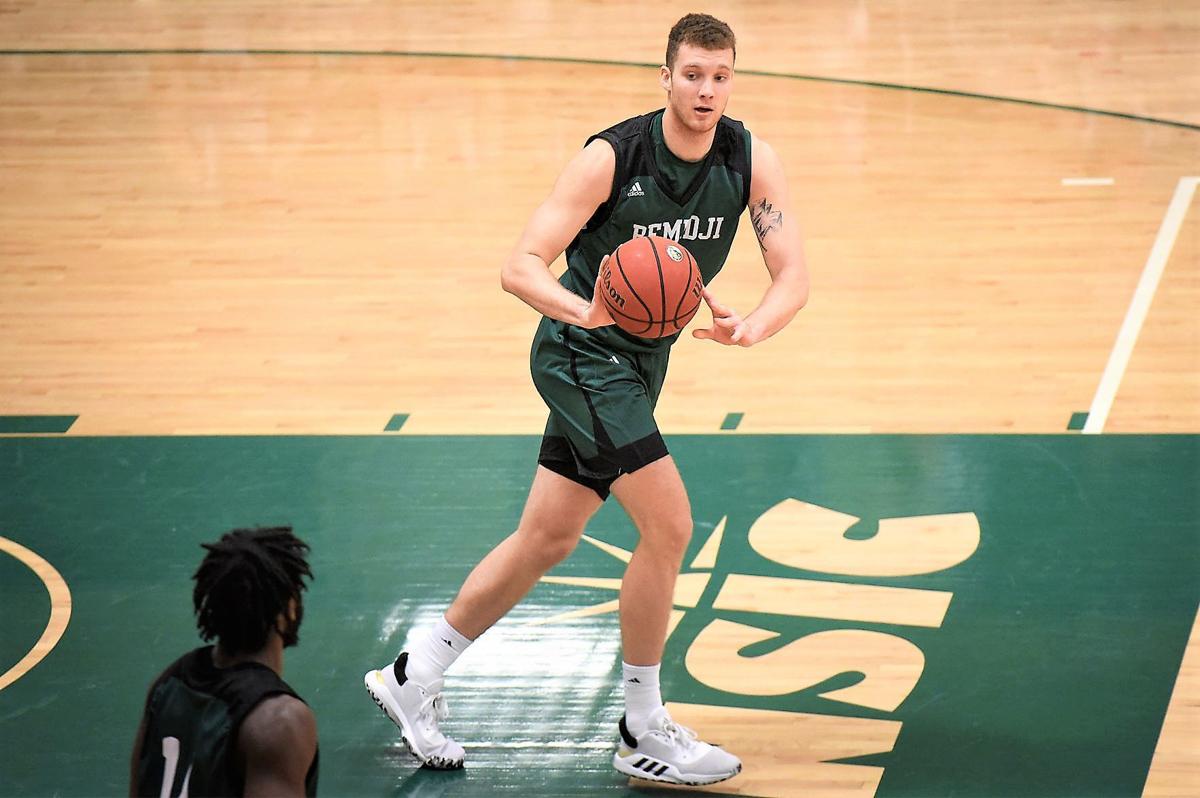 Faribault High School graduate, Kaden Hart, passes the ball in a game against Martin Luther on Nov. 16, 2019, at the BSU Gymnasium. Hart was one of the most-accomplished athletes in recent FHS history and went on to play basketball at Division II Bemidji State University. He died suddenly in late-June. (Micah Friez / Bemidji Pioneer)

Faribault High School graduate, Kaden Hart, passes the ball in a game against Martin Luther on Nov. 16, 2019, at the BSU Gymnasium. Hart was one of the most-accomplished athletes in recent FHS history and went on to play basketball at Division II Bemidji State University. He died suddenly in late-June. (Micah Friez / Bemidji Pioneer)

Kaden Hart held one of the most important unsung roles during Bemidji State men’s basketball practice, acting as the unofficial captain of the White Team and leading a group of bench players who challenged the starting five.

“He killed us every day in practice,” incoming senior Derek Thompson confessed. “We couldn’t stop him a lot of times. He would shoot the crap out of the ball and be a good teammate for the white squad. He kind of put them on his back most days, really.”

Moving forward, the White Team will never find someone to fill that role quite the same. Kaden Matthew Hart died unexpectedly on June 16. He was 21 years old.

“In the Beaver family, everybody knew Kade and loved to talk to Kade,” Thompson said. “(His impact) was being a good friend and a good teammate, being selfless and always doing the right thing.”

Hart will be remembered as far more than a basketball player. Those closest to him couldn’t help but feel his intelligence, his quick wit and — perhaps most of all — his selflessness.

“He cared about others,” Boschee said. “He had that heart that he wanted to help. … He just had a kind-hearted soul. When you’re 6-9 and 235, that kind of makes you a gentle giant.”

Hart, a Faribault native, appeared in 11 games for the Beavers in each of his redshirt freshman and sophomore seasons. He had a breakout game of five rebounds, two blocks and his first career 3-pointer against Minnesota Duluth on Jan. 3, 2020.

A 1,000-point scorer at Faribault High School, Hart also was a quarterback on the Falcons’ football team before graduating in 2017, piloting the team that defeated eventual state semifinalist, Owatonna, during his senior season.

Perhaps his greatest influence came off the court, however, where he was highly involved in BSU’s chapter of Fellowship of Christian Athletes and a basketball representative for the school’s Student-Athlete Advisory Committee. In the classroom, he was also a 2019-20 Winter Northern Sun Intercollegiate Conference All-Academic Team selection.

But it’s the smallest details that make a person who they are, forging an identity that accomplishments can’t replicate. Over time, even lighthearted episodes carved deep, loyal friendships.

“He was one of the funniest guys I ever knew,” Thompson said. “His sarcasm was so funny. Whenever we’re hanging out, we’re always having a good time and laughing, just enjoying each other’s company.”

Hart’s intelligence also came through loud and clear on the hardwood, to the point where it was unique among a select few on his team. Though he had yet to earn a consistent role within the rotation, his coaches lauded his knowledge of the game.

“He wasn’t able to crack the lineup much for us. I think he would have down the road a little bit,” Boschee said. “From a coach-player standpoint, he’s the guy you want on the court. He knew what we wanted. He had that (mental) picture. And very few players have that ability.

“I thought he was going to be a good coach someday, if he ever wanted to choose that, because of the way he helped people and wanted to help people do the right things on the basketball court.”

That carried over with his teammates. Thompson noted the way Hart could recognize the details and offer instructions to improve on the intangibles.

“He’s probably the smartest basketball mind I’ve ever played with. He’s got such a high IQ,” Thompson said. “He just sees things really well. I thought he would have been able to have a very positive impact this year on the floor. … His perspective of things — he just sees so much, especially for a big man — it’s really impressive how smart he was.”

‘We love him so much’

Hart is survived by his mother, Connie; father, Michael; brother, Kallan; and sister, Maryn; as well as many extended family members and a second family at Bemidji State.

“Kade will be dearly missed by so many people,” Thompson said. “We love him so much.”

About 50 BSU student-athletes attended Hart’s funeral on Wednesday, June 24. Afterward, they joined hands in a circle for prayer as Hart’s family looked on. The simple act — a moment of solidarity despite overwhelming grief — echoed a declaration of togetherness in the face of sorrow.

The service itself was deep with mourning and laughter, with Bible passages and the memory of a young man who touched many lives. Those who spoke relied on the assurance of eternal life found in Scripture.

Chandler See, a Bemidji State student and one of Hart’s closest friends, referenced Micah 6:8 in putting it this way: “He acted justly. He loved mercy. And now he can walk humbly with God.”