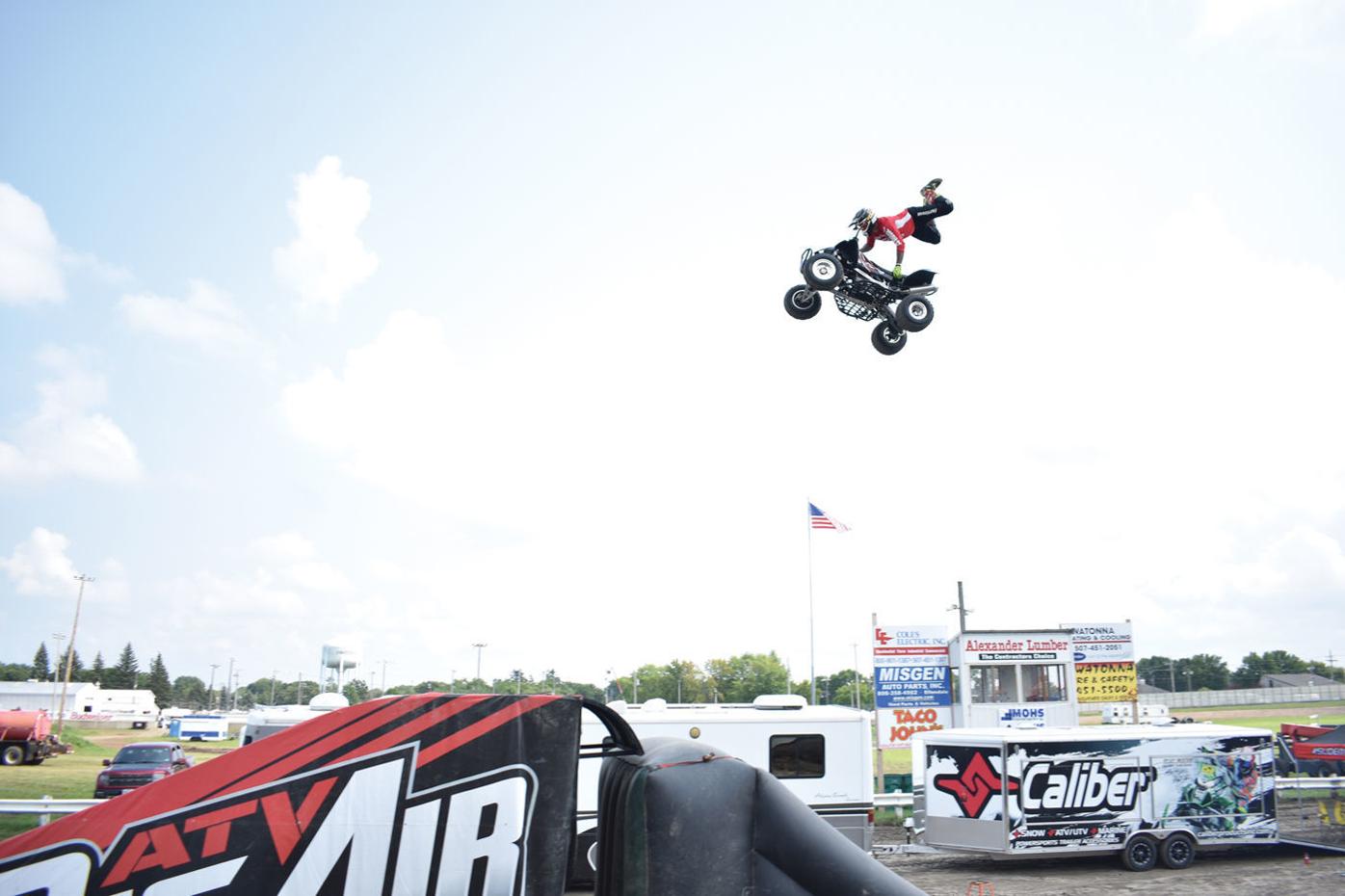 The Steele County Free Fair received an extra shot—several, actually — of adrenaline Wednesday as the ATV Big Air Tour brought their aerial acrobatics to the grandstand for a pair of shows. (Ryan Anderson/People’s Press) 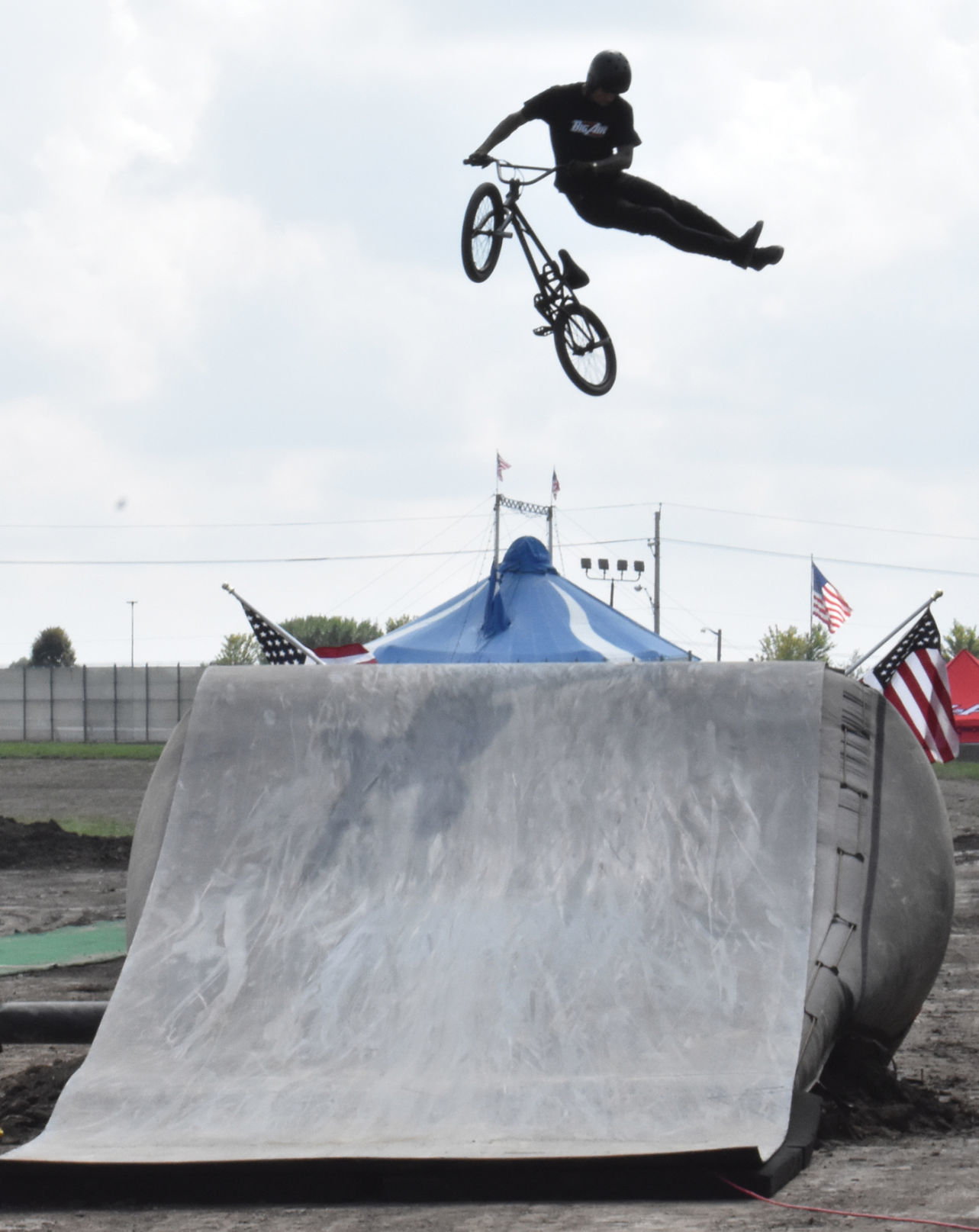 BMX, motocross, and ATV riders took turns launching off ramps into the air to perform freestyle tricks in front of the crowd. (Ryan Anderson/People’s Press)

The Steele County Free Fair received an extra shot—several, actually — of adrenaline Wednesday as the ATV Big Air Tour brought their aerial acrobatics to the grandstand for a pair of shows. (Ryan Anderson/People’s Press)

BMX, motocross, and ATV riders took turns launching off ramps into the air to perform freestyle tricks in front of the crowd. (Ryan Anderson/People’s Press)

OWATONNA — The Steele County Free Fair received an extra shot — several, actually — of adrenaline Wednesday as the ATV Big Air Tour brought their aerial acrobatics to the grandstand for a pair of shows.

BMX, motocross, and ATV riders took turns launching off ramps into the air to perform freestyle tricks in front of the crowd for an hour in the afternoon and another 90 minutes at night. The tour also visited the SCFF in 2017, but could only perform one engagement, as the other was canceled due to inclement weather.

The tour has performed in eight states already this year, including at the New Jersey State Fair earlier this month, and will head to Florida this winter, said Minnesota’s own Derek Guetter, the founder of the tour and a veteran riding professional. “We travel with about 15 people,” including eight riders, one of whom is Derek’s older brother, Dan, who only two weeks ago began jumping a 1,300-pound Polaris RZR.

While Dan had already been with the tour, it was in his capacity as photographer, and he’s accustomed to days in an office as a graphic designer, so piloting a massive vehicle off ramps into the air is “definitely a change of pace, but it’s the most fun I’ve ever had,” Dan said. “I’m hope for all the office people — if they want.”

He’s also no stranger to jumping with motorized vehicles, having grown up with the sport, so “I thought I could do it,” and “being a little crazy, we did it,” he said. After only three days of practice — “six or seven jumps” — “it was showtime on the fourth day.”

Fortunately for all involved, he “got it dialed in,” he said. “It’s a confidence thing.”

Safety precautions are foremost, of course, including a five-point harness for him in the RZR, he said. The tour is also increasing the distance for the jump only gradually, so as to not put him in unnecessary peril.

He jumps three times in a given show, with the third attempt usually joined by someone from the host site, like, for example, a member of the Fair board, he said. “They get to experience what I experience.”

“I compare it to a roller coaster,” but “it’s all in your hands,” he added. “It’s pretty exciting — and scary.”

He actually doesn’t look at his speedometer as he approaches his jump, he explained. Instead, “I feel how it’s shaking.”

Growing up on a corn-and-soybean farm, “we just got bored,” so Derek and his older brother, Jon, took the plunge into action sports, and Derek’s 16-year-career has taken him to 36 different countries, said Derek, who was the stunt rider for the ATV-jumping scene in the 2016 comedy “Mike and Dave Need Wedding Dates,” starring Zac Efron, Adam DeVine, Anna Kendrick, and Aubrey Plaza. While freestyle motocross was already an accepted entry into the action sports stunt canon, Derek and Jon were the first to transfer those tricks from motorcycles to ATV’s.

After years of trial-and-error — “a pretty painful learning curve” — “we make it look a lot easier than it actually is,” but that’s not to say danger isn’t still omnipresent, he said. Indeed, Jon was rudely and roughly reminded of that fact only recently, when he broke his wrist in a wreck — an injury that has knocked him off the tour as he recuperates.

“It’s definitely a scary sport,” Derek said. “I’ve broken everything you can imagine.”

His most-harrowing accident occurred when “I came up a bit short” on a jump, landed on the top of the ramp, and bounced down the pavement at the bottom, he said. He sustained serious back injuries, as well as a broken femur, and he needed eight months for convalescence.

He had been offered a position “with the biggest tour in the world” if he could execute a backflip, and “I would do anything” to procure that spot, so he took a calculated risk, he said. While he hasn’t let that accident keep him off the course, he did make one concession: “I don’t backflip anymore.”

Injuries have also been a major part of the young life of ATV rider-jumper John Langaas, the junior member of this contingent at only 19.

“Along the road to the tour, there have been plenty of crashes and broken bones,” said Langaas, who has been riding for a decade. His worst fall left him on crutches for an entire winter, but, when spring rolled around, he was back on the course.

“I had to start small to get my confidence back,” he said. “You don’t lose the skill, you lose the confidence. You can do (the tricks and the jumps), but you don’t think you can.”

Practice runs are important before any show, at least to Langaas, he said. Practice is “a confidence booster,” as it allows a rider to find a routine for his performance.

Langaas, who was raised in the northwest corner of Minnesota, 20 miles from Canada and 30 from North Dakota, received a phone call from Derek Guetter this summer while in his dorm room at North Dakota State University in Fargo, inviting him into the tour, and this has been “my best season so far,” he said. “We all love doing this thing.”

In addition to his ATV maneuvers on the course, Langaas — due to his background driving farm machinery — has also been asked to drive the tour bus on several occasions this summer, which “is a new one for me,” he laughed. “I get just as nervous driving the bus as I do the ATV.”

His personal favorite trick to execute this season on his ATV is “Dead Body,” in which his feet go through the handlebars, his body stretches straight — with half of his figure over the ATV’s front end — as he tries to “spot the ramp below you,” he explained. “It definitely feels a little different than other tricks.”