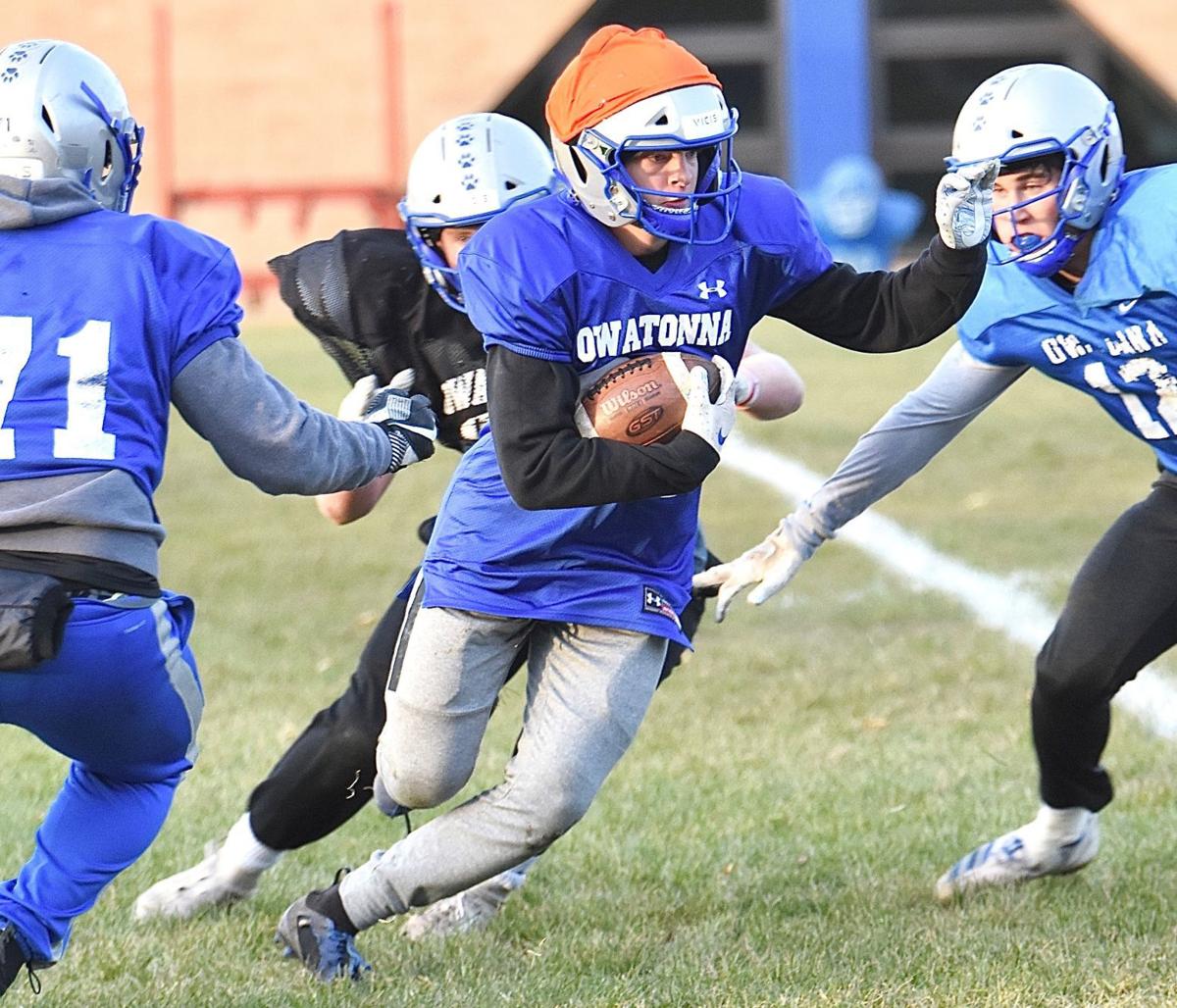 Jaden Dallenbach, seen here carrying the ball during a late fall practice in 2019, is the individual that elicited the most responses from the six junior and senior male Athlete of the Year finalists. The backup receiver was mentioned twice as the most easygoing teammate and once as the funniest. (Jon Weisbrod/People’s Press) 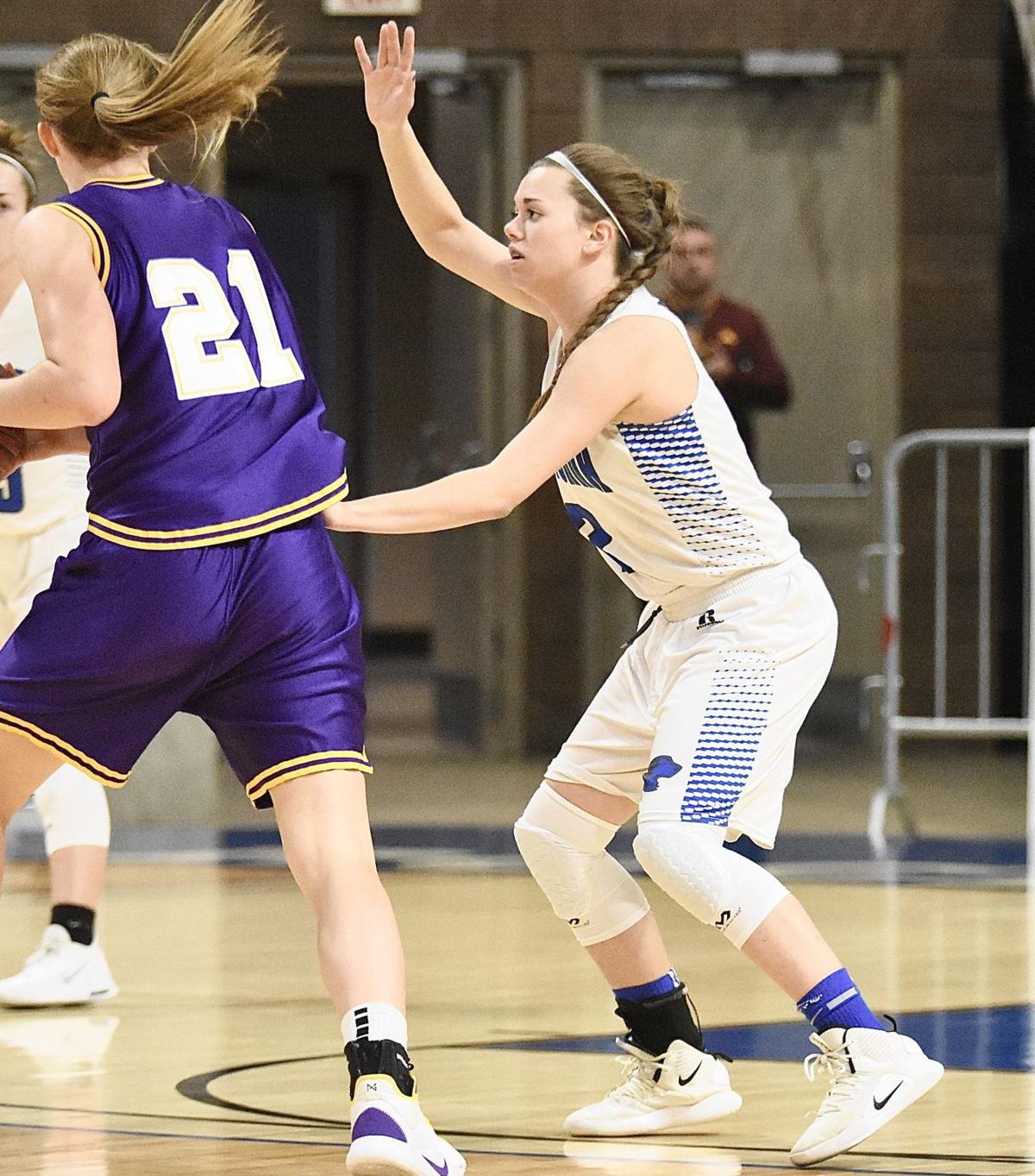 Maggie Newhouse, seen here guarding future University of North Carolina guard Alyssa Ustby on Dec. 27, 2019 at the Mayo Civic Center, was mentioned twice as the most-competitive teammate according to the six female junior and senior Athlete of the Year finalists. (Jon Weisbrod/People’s Press)

Jaden Dallenbach, seen here carrying the ball during a late fall practice in 2019, is the individual that elicited the most responses from the six junior and senior male Athlete of the Year finalists. The backup receiver was mentioned twice as the most easygoing teammate and once as the funniest. (Jon Weisbrod/People’s Press)

Maggie Newhouse, seen here guarding future University of North Carolina guard Alyssa Ustby on Dec. 27, 2019 at the Mayo Civic Center, was mentioned twice as the most-competitive teammate according to the six female junior and senior Athlete of the Year finalists. (Jon Weisbrod/People’s Press)

If you’re reading this column, you’re probably familiar with the recent four-installment series highlighting the Owatonna High School Athlete of the Year finalists.

In total, there were a dozen students featured — three boys and three girls from the junior and senior classes — and the articles drifted from the typical format and, instead, were presented as sequence of Q&A-style breakdowns.

I decided to use this method for a number of reasons, none larger than the fact that I wanted you, the reader, to get a glimpse into the unique personalities that make up this high-achieving group of young men and women. I was hoping to exhibit what binds them together while also revealing what sets them apart, both in and out of the realm of competition.

I attempted to formulate the questions so they would be easy to answer and easy to read. I wasn’t interested in handing out any homework, either. These guys (and gals) have dealt with enough over the last four months for me to expect them to spend more than 10-15 minutes on this. With that said, each group was prompt in getting back to me and the only deviation from the timeline I originally published was to squeeze in a long-form feature about former OHS hockey player Carter Broton. Other than that, we hit all the projected dates.

As I constructed these profiles and processed them for publication, I couldn’t help but notice some distinct commonalities and interesting responses, particularly to the questions that involved teammates. I asked each finalist to name their funniest, most easygoing and most-competitive teammate along with one notable vocal leader and one notable leader by example.

Being that these particular individuals are inherently some of the most visible student-athletes in the entire school and have each been named team captain at least once, I found it especially interesting discovering who they held in high regard. Basically, it was neat to see who were the leaders of the leaders.

On the other side of the coin, I thought it was fun seeing which names stacked up when it came to personality traits and discovering which social media platforms and classes were the most popular.

Obviously, the results you’re about to read are not scientific. Not only is the sample size far too small, but doesn’t include the same variables. In other words, not all six finalists for each gender were involved in the exact same activities and some gave multiple answers to certain questions. Additionally, some sports have lots of cross-over while others have no representation at all.

Things got really interesting when it came to what these six had to say.

I found it particularly fascinating that Syd Kretlow showed up once on each end of the leadership spectrum, being named a notable vocal leader in gymnastics and a notable leader by example in soccer. Clearly, the 2019 graduate and current University of Minnesota runner made a huge impression during her four years at OHS.

As for the always-popular social media reply, Instagram, Tik Tok and SnapChat were each mentioned two times.

And, finally, the response — or more accurately the general subject — that appeared more times than any single reply for either gender was...

It showed up a whopping five times and included variations ranging from “any class with Mr. Jeff Williams,” to “Human Biology,” to just plain old “Science.”

The name that emerged the most beneath the “Team File” segment was Jaden Dallenbach, twice for most easygoing and once for funniest. Since baseball was cancelled, this young man played just one sport (football) this year and wasn’t a starter, so for him to have made such a profound impression on an already a high-profile group of teammates speaks to his character.

Nolan Burmeister appeared on the list twice for most-competitive teammate, once for basketball and once for soccer. Also, 2019 graduate, Joe Edel, was named on two occasions under the notable vocal leader category. Carter DeBus picked up two nominations for funniest teammate.

Under the “Personal File,” Instagram led the way with three mentions as preferred social media platform while pizza and history were listed twice apiece for favorite food and subject, respectively.

Here are some other interesting tidbits:

-Instagram was the most popular answer for preferred social media, beating SnapChat’s four replies. However, neither Facebook nor Twitter were named. I always find this interesting because I was in college, a sophomore to be exact, when Facebook was available only to select campuses, most of which were large public universities. It did, however, migrate to tiny Saint Mary’s University in Winona by the beginning of my junior year and, well, the rest is history. As for Twitter, I can still recall trying to figure out the difference between a “mention” and a “hashtag” when I created my first profile way back in 2009.

-Seven of the 12 finalists had at least one parent who graduated OHS and 11 have some sort of family connection to the school.

-I found it surprising that there was zero cross-over when it came to favorite movie. All 12 individuals had a different answer, ranging from Star Wars, to The Bee Movie, to The Green Mile.

-As for TV shows, there wasn’t any commonality between genders, but one boy and one girl each mentioned All American.

Below is a list of responses that appeared at least twice in the Q&A profiles for the 6 OHS Female Athlete of the Year finalists...

Note: Aside from being named twice under most-easygoing, Jaden Dallenbach also showed up once for funniest.