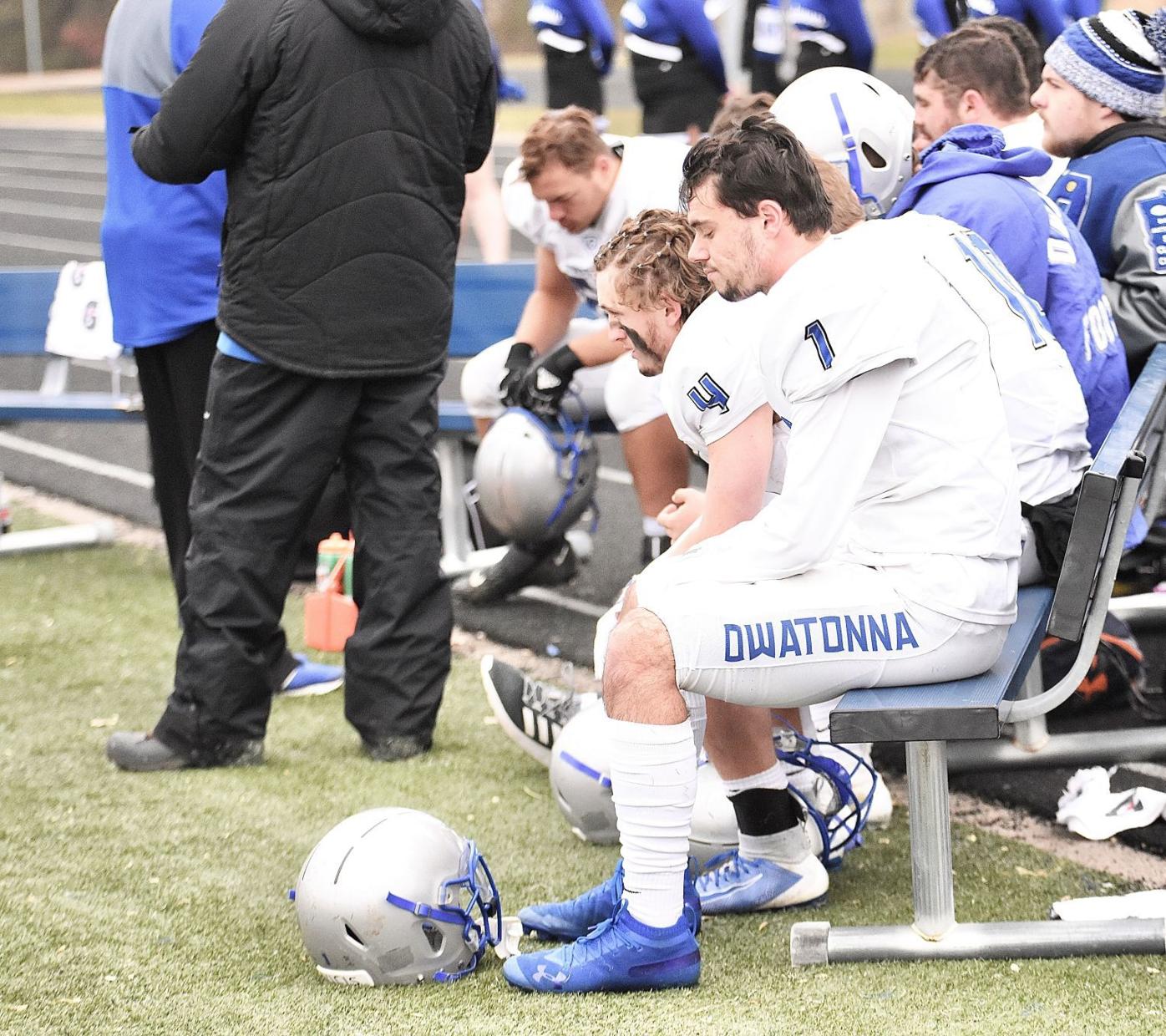 Members of the Owatonna football team, including Matt Williams (1) and Ethan Walter (4), can only watch from the sideline as the St. Thomas Academy football team scores its first touchdown late in the first half on Saturday during the opening round of the Class 5A state tournament. (Jon Weisbrod/People’s Press) 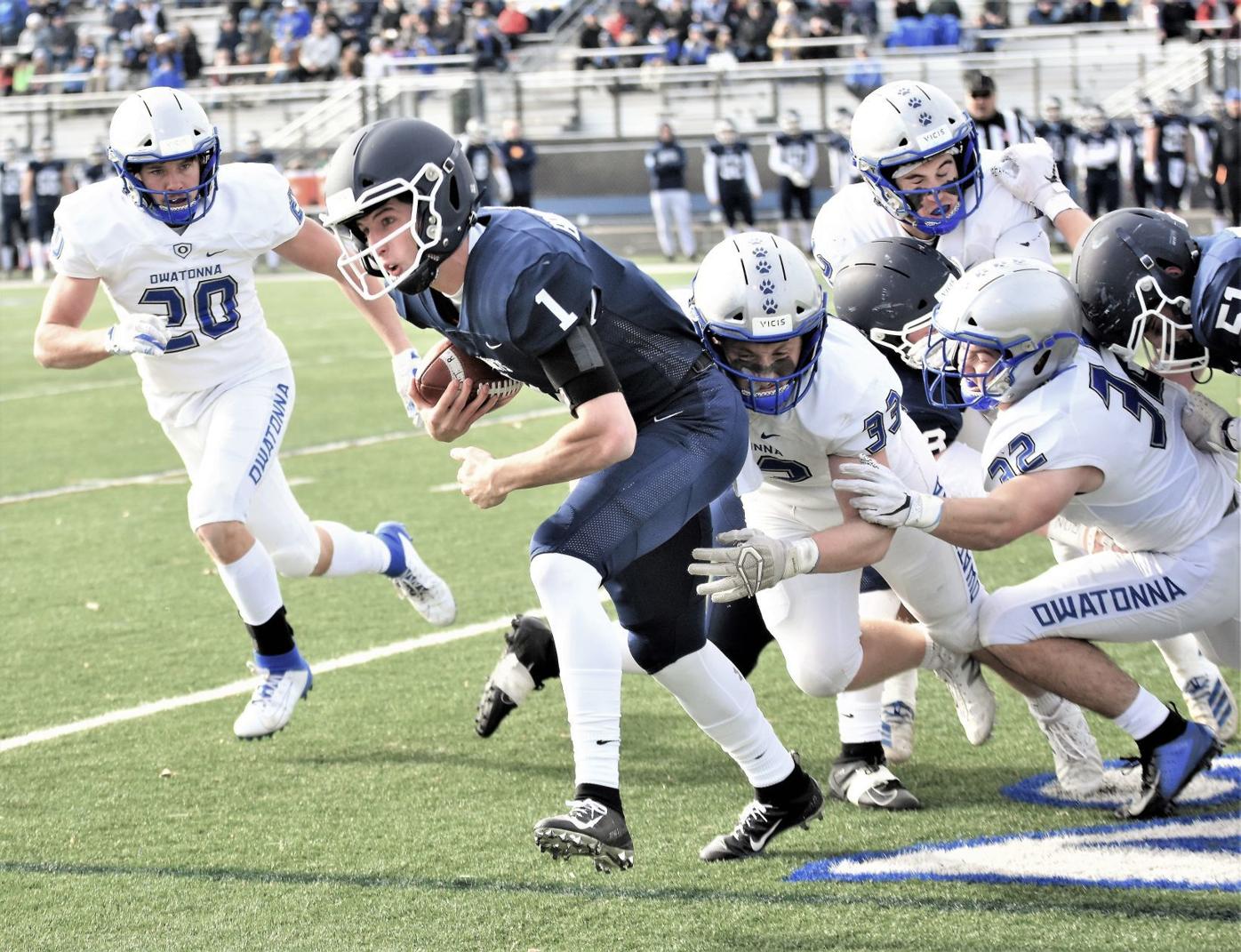 St. Thomas Academy’s Joe Deyak (1) is taken down by Owatonna’s Isaac Gefre (33), Hunter Menden (32) and Carson DeKam (12) as Zach Stransky (20) pursues from the outside on Saturday at Woodbury High School. (Jon Weisbrod/People’s Press)

Members of the Owatonna football team, including Matt Williams (1) and Ethan Walter (4), can only watch from the sideline as the St. Thomas Academy football team scores its first touchdown late in the first half on Saturday during the opening round of the Class 5A state tournament. (Jon Weisbrod/People’s Press)

St. Thomas Academy’s Joe Deyak (1) is taken down by Owatonna’s Isaac Gefre (33), Hunter Menden (32) and Carson DeKam (12) as Zach Stransky (20) pursues from the outside on Saturday at Woodbury High School. (Jon Weisbrod/People’s Press)

WOODBURY — This was not a fluke.

It was not the exception to the rule. There was no luck involved in determining the outcome.

The St. Thomas Academy football team simply lined up against the two-time defending state champions and won, plain and simple. And for the first time since the 2015 season, Owatonna will not play in the state semifinals and instead be forced to take the long trip home from Woodbury High School licking its wounds after a 21-0 loss to the big, physical and aggressive Cadets in the opening round of the Class 5A state tournament.

There are no silver-linings after suffering a season-ending loss, but to the astute OHS player, they probably have already accepted the fact that St. Thomas was the better team on Saturday.

There simply wasn’t much they could do.

“They beat us today,” Owatonna coach Jeff Williams said moments after the game. “I think our kids had high expectations. That was a very good St. Thomas team. Obviously, we consider ourselves to be one of the best teams in the state and I think we can still hang our hat on that. I just don’t think we were as good as St. Thomas today. I don’t think that’s anything to apologize for. They were very, very, very good today.”

The defeat is the first for Owatonna since the middle of the 2017 season and snaps a 29-game winning streak. The Huskies also hadn’t lost in the postseason since Nov. 18, 2016 in a 19-7 setback to Elk River at U.S. Bank Stadium.

The Cadets stole momentum — and scored the game’s only necessary touchdown — late in the second quarter after blocking an Owatonna punt and taking over at the Huskies’ 7 yard line. Three plays later, Danny McFadden was in the end zone with 2 minutes, 36 seconds left in the second quarter.

According to Williams, the blocked kick was the first against his team since the 2009 season, and was a major turning point in the game.

“Part of the deal too is we don’t punt very often and then you start to see tougher competition and you have to punt more frequently,” he said. “There was penetration where there ought-not to have been and that happens once awhile. That really shifted momentum.”

After gaining only 20 yards and earning just one first down on an OHS penalty in the first 24 minutes, the Cadets flipped a switch and started the second half with a gut-punching 18-play, 80-yard drive that sapped more than nine minutes off the clock and extended their lead to 14-0 when freshman tailback Love Adebayo spun through the Owatonna defense for a 20-yard touchdown run.

Aided by a roughing the punter infraction that pumped new life into the stalled drive, Owatonna marched all the way to the STA 7-yard line on the ensuing possession, but was denied at the doorstep after three consecutive incomplete passes. Owatonna (10-1 overall) would get the ball back just two more times the entire game and fell behind 20-0 when Adebayo — who led the Cadets with 60 rushing yards — pushed forward for a 3-yard score to cap a short drive with 2:57 on the clock.

The Huskies were sacked three times, gained just 50 rushing yards on 18 carries and finished with a season-low 179 yards of total offense, a large chunk of which came on a 54-yard bomb to Payton Beyer on 3rd-and-20 in the middle of the first quarter. Owatonna was also given an extra 15 yards on the play due to a roughing the passer infraction and appeared in prime position to get on the board, setting up shop at the STA 20-yard line.

But as it did the entire game, the Cadets tightened the screws and didn’t yield and inch, let alone a yard, for the next three plays and danced off the field after Sam Henson’s field goal clanged off the right upright.

Owatonna quickly got the ball back and penetrated the St. Thomas end of the field as the game seeped into the second quarter, making it all the way to the Cadets’ 35 after a 15-yard reception by Ethan Walter. St. Thomas, though, buckled down and forced another field goal attempt. Kicking into the wind, Henson drove the ball low through the sky but could only watch as it zipped under the upright.

“At that point we were just looking for points,” Williams said.

The Cadets did not gain a first down until the 6:45-mark of the second quarter after the Huskies’ were called for defensive holding...St. Thomas completed three passes for seven yards, all of which came in the second half...With more than 60 combined running plays, the game was completed in just over two hours...Before Saturday, Owatonna had not been shutout since Sept. 19, 2014 against Mankato West...At 6-foot-4, 237 pounds, STA’s Ben Reppenhagen is not only an all-state caliber linebacker, but one of the best punters in the state. The senior flipped field position on a number of occasions with several booming kicks that had Owatonna’s returners sprinting backwards simply trying to track down the ball.