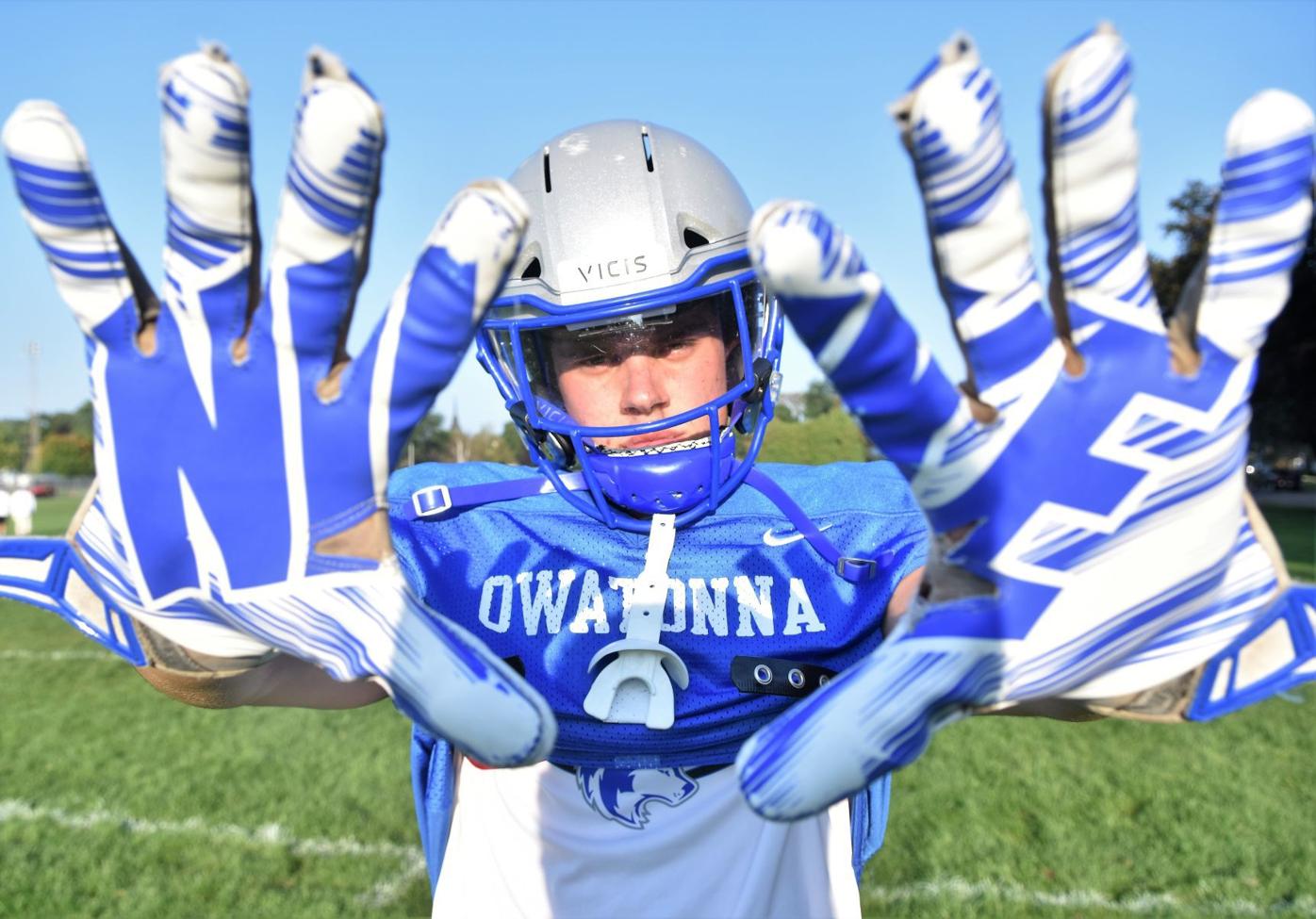 Owatonna’s Matt Williams possesses excellent hands and has exhibited his pass-catching ability on many occasions over the previous season-and-a-half. (Jon Weisbrod/People’s Press) 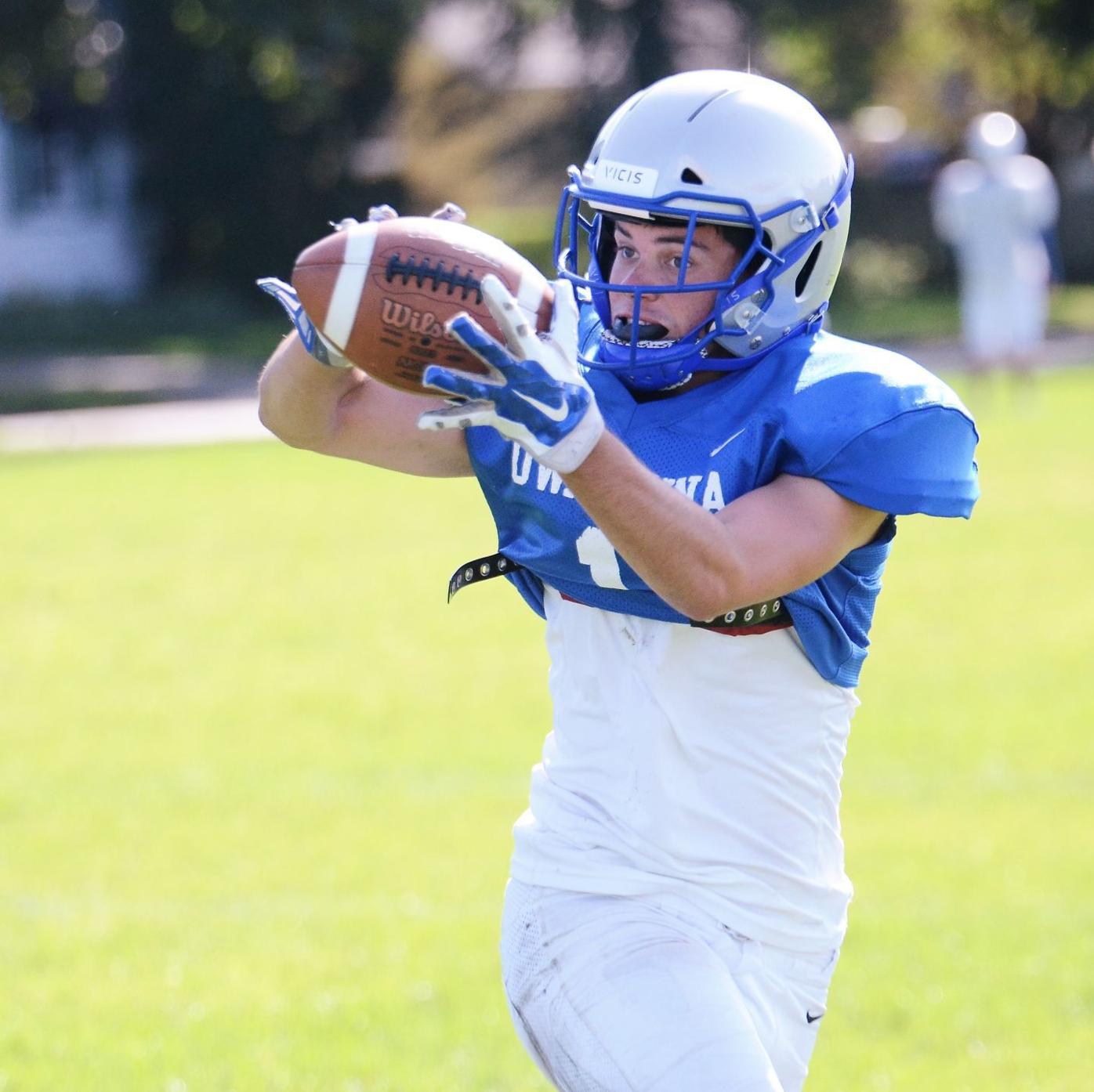 Owatonna’s Matt Williams possesses excellent hands and has exhibited his pass-catching ability on many occasions over the previous season-and-a-half. (Jon Weisbrod/People’s Press)

If a receiver needs two essential qualities to be successful, it’s the ability to get open and catch the football.

Elementary, sure. But how many guys have washed out of football — at any level — simply because they couldn’t secure the ball consistently or pry loose from a defender?

The answer: A lot.

Owatonna’s Matt Williams has staying power because he possesses the two fundamental traits to survive, and in his case, thrive, at the position. He isn’t slow, but he isn’t a classic burner. He is self-aware enough to know that he probably isn’t going to have much room to catch the ball when it’s thrown in his direction, so he makes up for his lack of high-end speed by using the one quality that is unequaled within the Huskies’ deep stable of receivers.

“He catches everything in his clock,” said Matt’s dad, Jeff Williams. “I think he very much prides himself in being that consistent go-to guy that quarterbacks can trust. He really does possess really nice hands, and I think that’s from playing catch in the yard.”

Williams grew up in a sports-centric household. Jeff has been the head coach of the Owatonna football team for Matt’s entire life and the family has always lived in a “sports neighborhood.”

“Matt always had buddies in the yard playing touch football, and wiffle ball and basketball in the driveway and we would always have sports going on in our yard and the Achterkirch’s yard,” coach Jeff Williams said. “It’s always been a sports neighborhood. I don’t think you can undervalue playing catch with your kids and playing sports in the yard all the time, because then they have a fighting chance.”

Matt has taken that fighting chance and elevated it to another level. For a player that admits he’s probably the “slowest” of the receiver group, he’s posted some impressive numbers so far this season. In three games, he’ caught six passes for 117 yards and two touchdowns.

In a single quarter against New Prague last Friday, Williams displayed in vivid detail just what makes him such a reliable target.

With roughly four minutes left in the first quarter, Brayden Truelson took a shotgun snap and lofted a high-arching pass down the left sideline. With the defender matching him step-for-step, Williams turned his body at just the right time, leaped in the air and snatched the ball at the apex of his jump before falling backwards and tip-toeing the sideline in-bounds.

“I was running the route and the guy played it perfectly,” Williams said of the 30-yard reception. “I didn’t beat him or anything, he was right there and I guess I jumped higher than him and made the play.”

Just one offensive possession prior, Williams lined up in the slot just inside the Trojans’ 15 yard line and sprinted forward directly toward the defensive back after the snap. He then planted his right foot, turned his hips and glided to the to the right side of the end zone. With his defender completely turned around, Williams found himself wide open as Truelson lofted the ball into his hands for the touchdown.

For the elder Williams, it’s sometimes difficult to appreciate Matt’s accomplishments in the present moment, and for good reason. As the head coach and offensive coordinator, it’s his job to remain three steps ahead of the opponent. It’s only after the game — often the next morning during initial preparation for the upcoming matchup — that he can truly sit back and say “wow, that was my son.”

“Not really,” Williams said when asked if he can appreciate Matt’s accomplishments during the game. “I guess in the same way a surgeon doesn’t think about that either. You’re in there doing your work and not that I don’t go back and watch a video clip and say ‘wow’ sometimes. I mean, that move he made for his touchdown against New Prague was a great route. Little inside bite, the kid did the whirly bird and he busted to the corner and wide open just how we drew it up.”

However, if there was ever a time that Matt caught his dad’s attention during a game — and eventually the eyeballs of thousands of viewers online — it was just about a year ago in last season’s matchup against New Prague. Making the grab that has since spawned his playful nickname of “Odell Williams,” Matt jumped backwards in the end zone behind a defender and snatched the ball with one hand before tumbling onto his back and cradling the ball for a touchdown.

In many ways, the now famous catch was just another sample in a long line of such plays. Williams said he started messing around with one-handed grabs with mini-footballs in his back yard and progressively nurtured his already innate ability to make the difficult catch look easy. Williams will routinely latch onto balls with one hand during pregame warmups and has made more than his fair share of such grabs in practice, too.

“It has always come easy to me, I guess,” Williams said. “I have been catching balls since I was two because my dad is the coach, obviously. But it’s come easy to me. I have heard it’s a lot of your eyes, but I honestly don’t think too much about it. I just do it.”

From the player to the person

As a selfless individual, Williams seems to thrive in his role as one of the many important cogs in Owatonna’s steamrolling machine. As an outgoing and vocal leader, he gets along with everybody and has formed a special bond with his classmates in the ultra-talented senior class.

The group has been heralded ever since their junior high days and hasn’t disappointed since elevating to the highest level. Matt was one of many juniors that played vital roles on last season’s state championship team and is an even bigger component to this year’s squad that’s started the 2019 campaign undefeated. The Huskies have outscored their first three opponents by an average score of 54-6 and has been ranked No. 1 in the state since the first poll was released three weeks ago.

“We knew we were going to be good,” Williams said. “But we knew we had to keep working and grinding. We knew coming up, but we never let that stuff get to our head. We aren’t taking games off.”

In the blink of an eye, though, the preseason practices and nearly half of the regular season has flown by. The team knows what everyone expects them to accomplish and will almost certainly make a deep postseason run, but the reality remains that the team has just six guaranteed games remaining.

“I think (Carter) DeBus said yesterday, ‘it’s Week 4 already...wow.’ It’s ridiculous,” Williams said. “You’re trying not to think about it being over but you know it’s coming at some point. It’s sad to think about all the stuff you have worked for since third grade is going to come to an end at some point. You just have to enjoy when you’re in the moment.”