The Panthers fell to the Le Sueur-Henderson Giants on Saturday afternoon at Caswell Park in Mankato, 11-0. They bounced back to defeat the Maple River Eagles later in the day to stay alive in the Section 2AA softball tournament. (Lucas Seehafer/southernminn.com) 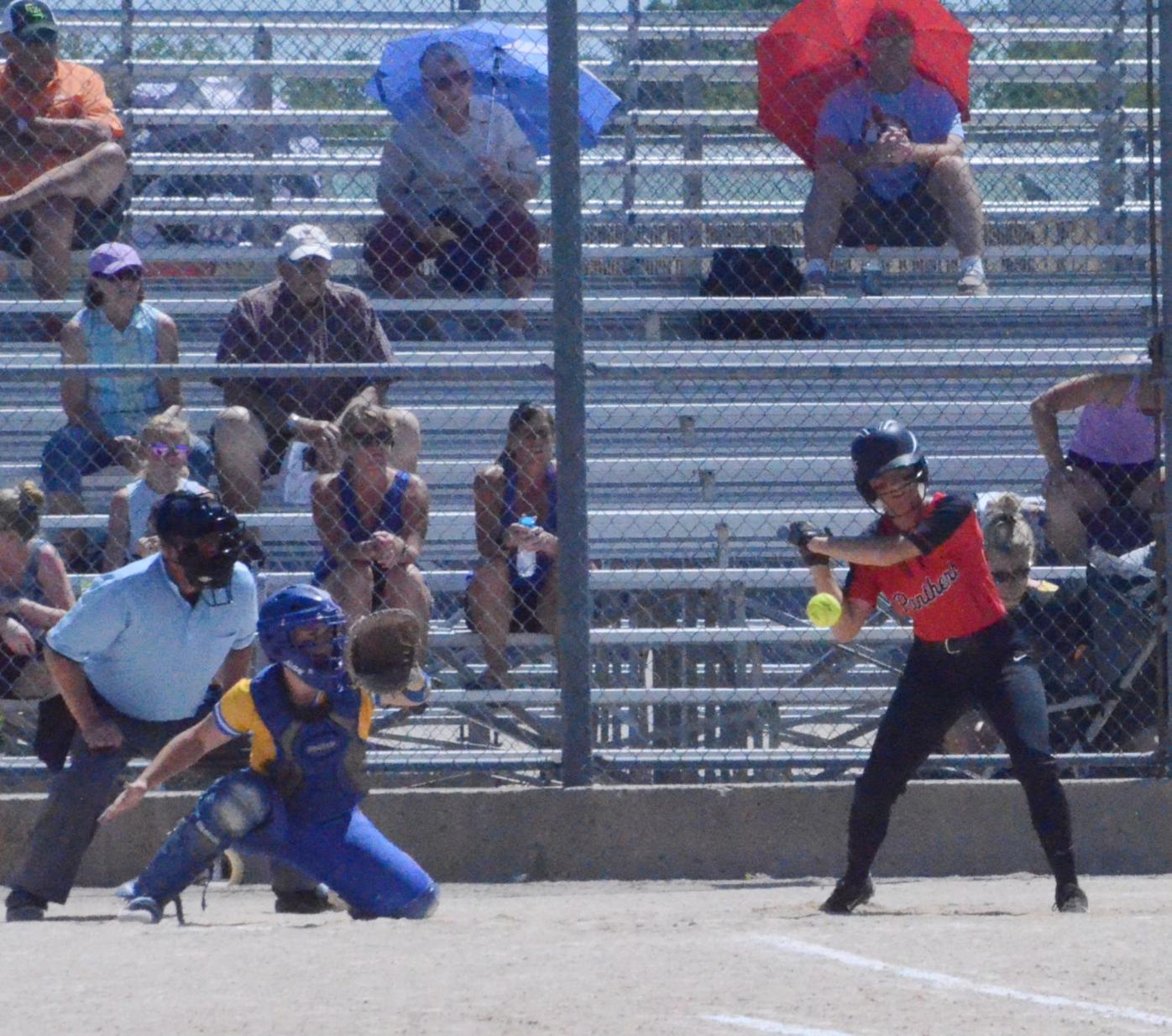 The Panthers failed to score a run during their loss to Le Sueur-Henderson on Saturday afternoon in Mankato, but their bats warmed up against Maple River as they scored seven runs to secure the win. (Lucas Seehafer/southernminn.com)

Baseball is not all that similar to basketball and football, especially when it comes to the playoffs.

In the latter two sports, upsets are uncommon and when they do occur they’re a cause for celebration and dramatic storytelling. No one will ever forget how the No. 16 seed University of Maryland, Baltimore County Retrievers took down the title-favorite No. 1 seeded Cavaliers of the University of Virginia during the opening round of the 2018 NCAA Division I Men’s Basketball Tournament. Neither will it ever be forgotten how Vince Young led the University of Texas Longhorns past the almighty University of Southern California Trojans during the 2005 Rose Bowl to claim the BCS National Championship.

The so-called “best team” doesn’t always win. Upsets, while still ripe for worthy celebration, are more common and sometimes all a team needs is for a pitcher or a couple of batters to get hot to carry them deep into the postseason. Such is the case for both the 2021 NRHEG baseball team.

The Panthers entered the Section 2AA baseball tournament losers of five of their final seven contests of the regular season and as the No. 12 seed with a 7-11 record overall. They weren’t expected to get past the No. 5 Minnesota Valley Lutheran Chargers, who had won the Tomahawk Conference with an 11-3 record. But they did.

NRHEG took down the Chargers, 7-3, thanks to good pitching and timely hitting. While they subsequently fell to No. 4 Sibley East 8-0 during the second round of the tournament, their win over MVL pushed the Panthers into the double-elimination portion of the bracket. The loss to the Wolverines set up NRHEG with a match against No. 8, and Gopher Conference rival, Medford. The two teams split their regular season games, each winning by one run, but Daxter Lee saw to it that the Tigers didn’t stand a chance.

Lee threw a complete game, one-hit shutout to advance the Panthers to the second round of the consolation bracket where the No. 2 Blue Earth Area Buccaneers and their fearsome offense awaited. The Buccaneers entered the match with a record of 15-7 and were scoring 10.1 runs per game on average; they had whallopped the Panthers 18-2 during the two teams’ previous meeting nearly one month ago. But this time it was Kordell Schlaak’s to thrust the door shut.

Schlaak went the distance and allowed only two runs as NRHEG upset Blue Earth Area, 5-2. Andrew Phillips was king at the plate, going 2-for-4 with a triple and three RBI. The Panthers had staved off elimination yet again.

The story of the NRHEG softball team begins with their second round win over No. 5 Cannon Falls. (They easily defeated No. 13 Blue Earth Area, 11-0, during the opening round.)

The No. 4 Panthers entered the game as the favorite to win, but in No. 4 versus No. 5 seed matchups, no one team stands significantly taller than the other.

NRHEG began the bottom of the seventh inning trailing, 3-1. Anna Jacobson led-off the inning with a single and Brenlee Knudson followed two batters later with a walk. Bree Ihrke singled to reduce the Bombers’ lead to 4-2. The next batter popped out and Hallie Schultz was intentionally walked. Sophie Stork approached the plate with the bases juiced and two outs on the board.

Stork fell behind in the count and was down to her final strike when she drove a single into left field, scoring Knudson and Ihrke and sealing the victory for the Panthers.

“Words cannot express how proud I am of these girls and their never-give-up attitude. They fought hard to win this game,” NRHEG coach Wendy Schultz said after the game.

The win brought their record to 20-2 on the season and set them up to face the No. 1 seeded Le Sueur-Henderson Giants in the semifinals of the Section 2AA winners bracket.

The Giants began the game as not only the No. 1 seed in the tournament but also the No. 1 ranked team in all of Class AA, according to the Minnesota Softball Coaches Association, and they lived up to their reputation. The Panthers limited the Giants to two runs over the first four innings, but were unable to get their bats going. Four NRHEG errors combined with strong hitting by LSH over the game’s final two innings pushed the Giants to an 11-0 win, which was capped off by a walk-off grand slam.

The Panthers could have easily thrown in the towel as the wind howled and the temperature soared into the triple-digits. And yet, they didn’t.

“This was a complete team win,” Schultz said. “I’m so proud of the way they played in the oppressive heat conditions.”

Both Panther teams returned to action after publication deadline.

The baseball team got their second crack at No. 4 Sibley East on Monday evening in Gaylord, while the softball team went up against No. 2 Lake Crystal-Wellcome-Memorial on Tuesday evening in Mankato.

Entering the week, both team needed to win their next four games to qualify for the Class AA state tournament.