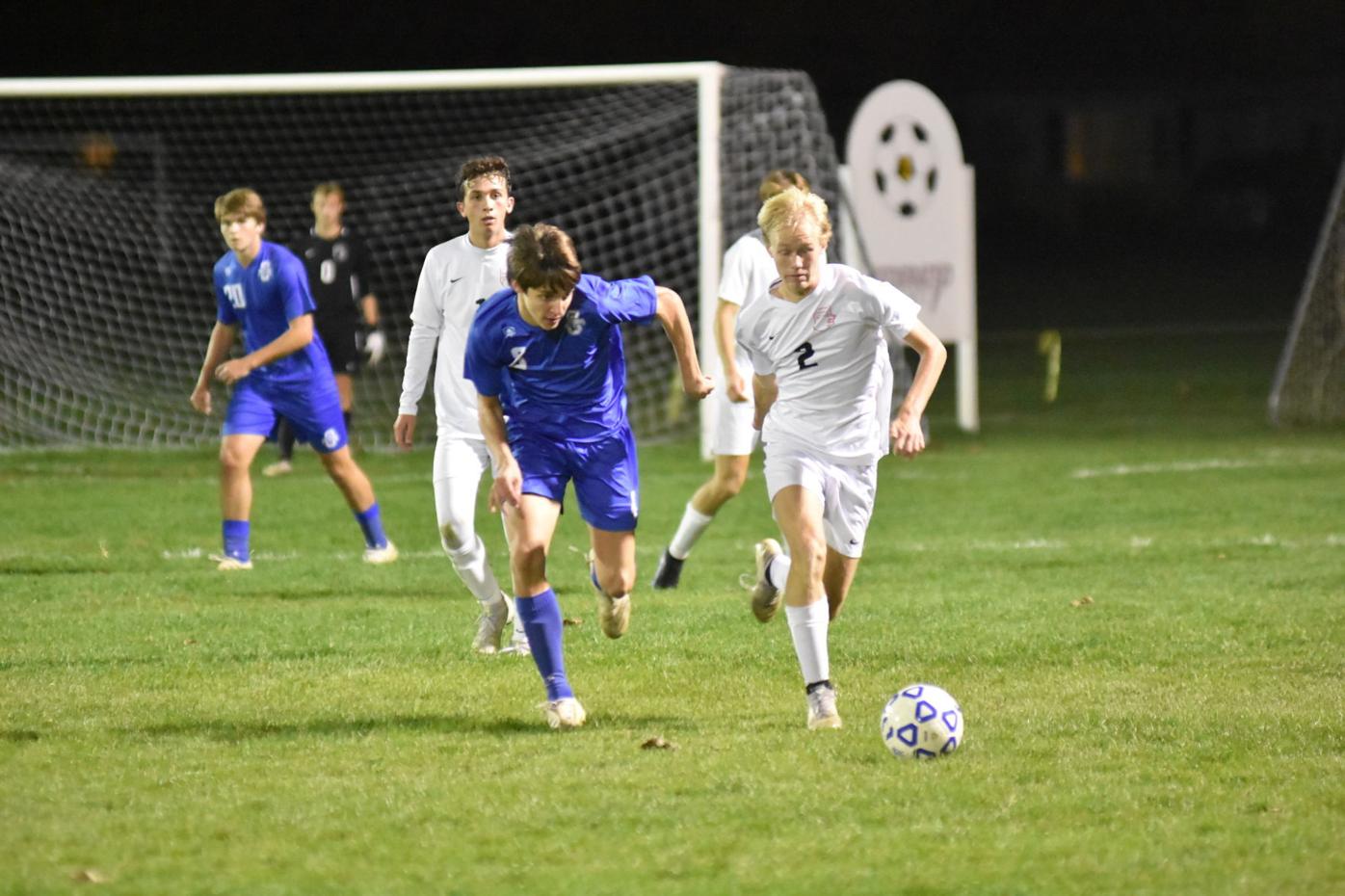 Owatonna sophomore Garrett Karsten (8) chases down a Lakeville North Panther who has control of the ball. (Stephen McDaniel/southernminn.com) 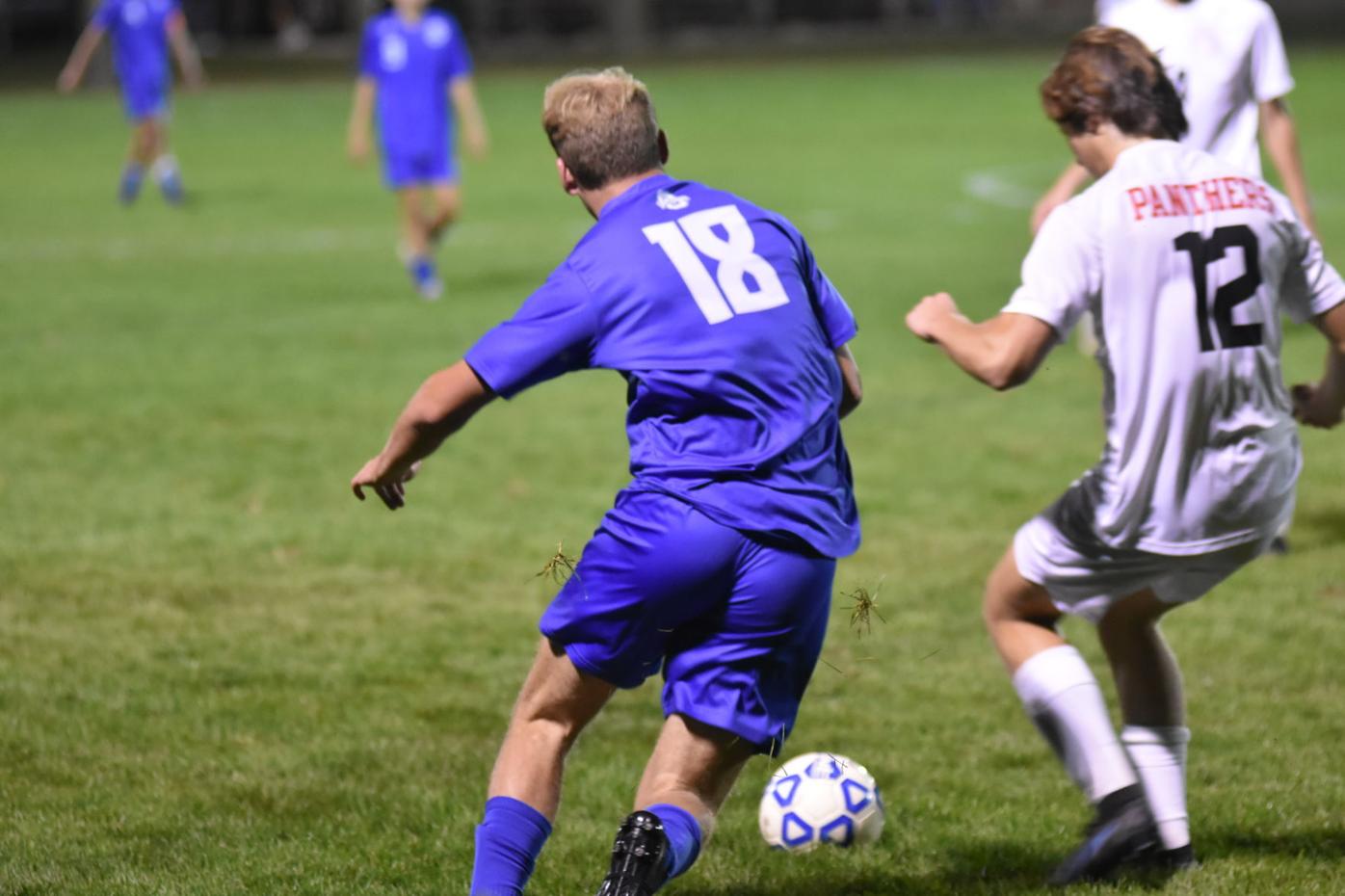 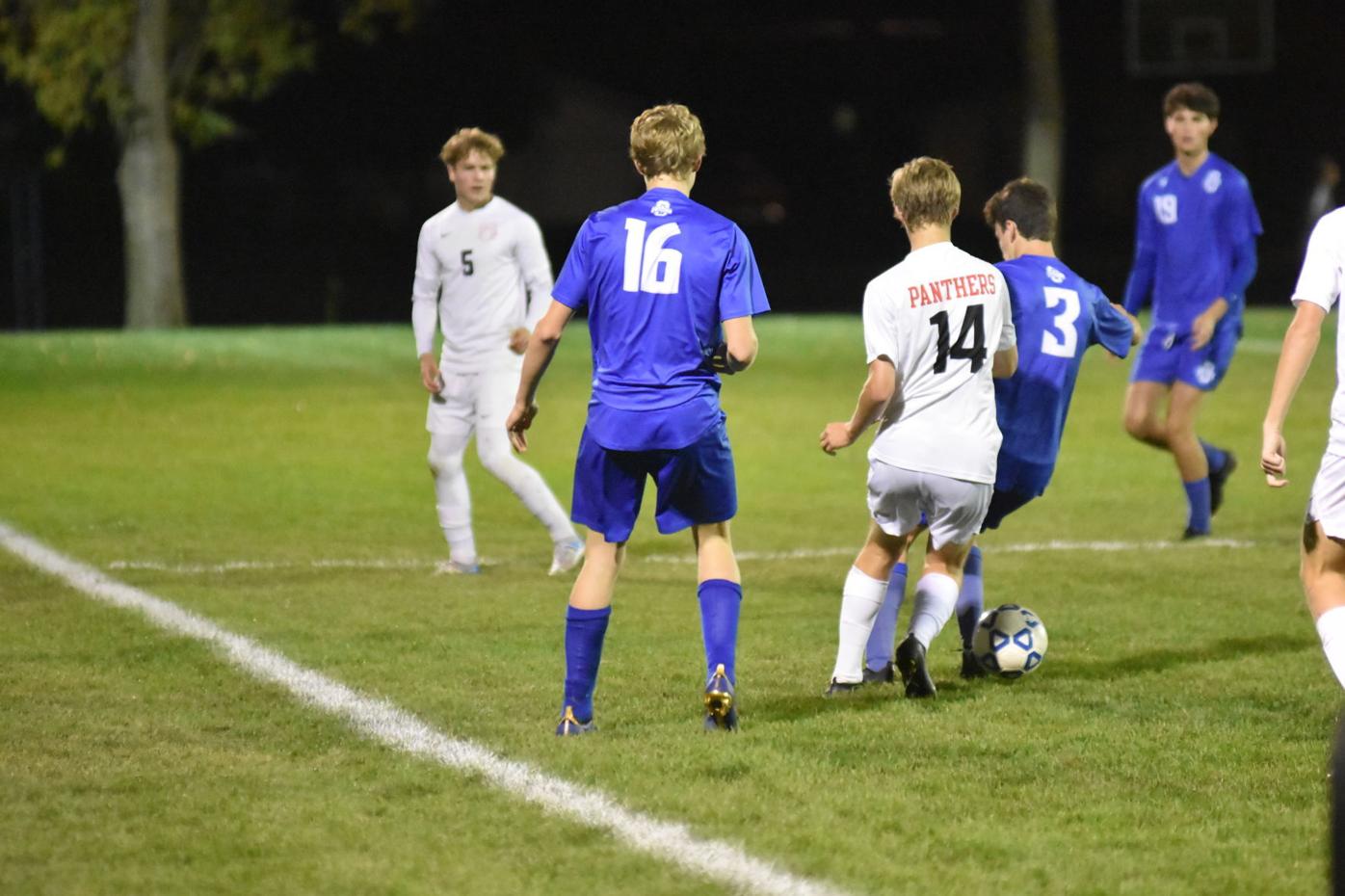 Owatonna’s Noah Kubicek (16) and Ryan Gregory (3) look to get the ball away from Lakeville North. (Stephen McDaniel/southernminn.com)

As a Lakeville North Panther slowly dribbles the ball out to midfield while leading 2-0 over the Huskies, the horn sounds to signal two things: The visiting No. 5 Panthers are moving on to the next round of the Section 1AAA boys soccer tournament and the No. 4 Owatonna Huskies’ season has come to an end.

Letting in two early goals in the first half and trailing 2-0 at halftime, the Huskies came out in the second half forced to play catch up.

The attempt to get back into the game and cut Lakeville North’s lead proved to be a tough task that lasted all of the final 40 minutes, not including the time Owatonna trailed in the first half.

Needing to get their attack going, the Huskies were forced to start chasing a Panthers squad that had a strong focus on playing more defensively and keeping possession in their favor with multiple passes back and forth in their half and their goalkeeper ticking as much time off the clock as possible by keeping the ball close.

Owatonna knew that being able to find that first goal would change everything.

Despite facing a couple of opportunities to find the back of the net, the Huskies weren’t able to tally a goal and ultimately fell to Lakeville North, ending its season with a 2-0 loss on its home pitch in Owatonna.

“The effort was there, they really wanted to get that first goal,” Owatonna coach Robert Waypa said, “We felt that if we got to 2-1, it’s a different game, now there’s a little more pressure on them, but we just couldn’t get that one goal today.”

Along with their season coming to a close, the Huskies also were forced to say goodbye to their senior core, who got to play their final game with Owatonna in front of their friends and family.

Whether they were a player that joined varsity as a senior or a player that started as a sophomore and grew into a senior leadership role after a few seasons, the impact they had on the program will be felt in the younger players on the team.

The seniors produced on the field, as well as led by example, showing the kind of effort and dedication it takes to the younger players new to the varsity soccer environment.

While Owatonna says goodbye to its 10 graduating seniors, it’ll return 12 players for the upcoming season.

For the returning players, turning the frustration and sadness from a loss like this into motivation and fuel over the offseason and into next season will be key for success in the future.

Coming into this season, the Huskies told themselves that they wouldn’t lose to teams they lost to the previous season, such as Austin. They were able to avenge those prior losses en route to a 10-6-1 season overall.

In the case of Lakeville North, the Panthers return to Owatonna for the Huskies second game of next season, which will only be one of the games pushing them through the offseason.

But for now, all the Huskies can do is reflect on the season they had and start resting in order to hit the ground running for next season.

“I was proud of the guys, battled to at least get home field advantage this postseason,” Waypa said. “Going out at home is never pleasing, but at least we did it here, one more game on the field, one more game under the lights. I think that meant something also.”