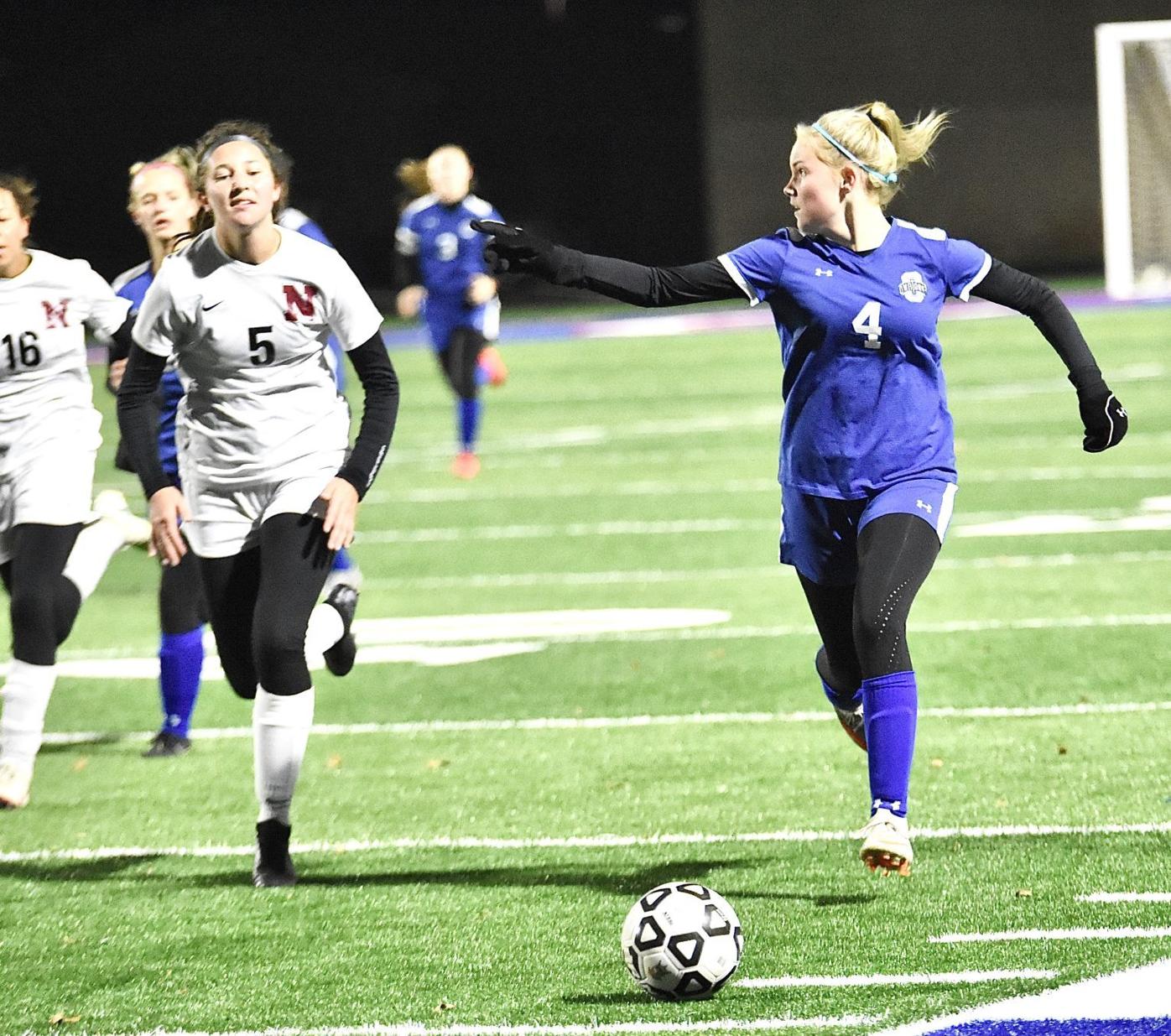 Owatonna sophomore Ezra Oien sprints down the left sideline on Wednesday night during a Section 1-AA semifinal game against Northfield played at the Hammer Sports Complex in Albert Lea. The Huskies take on Lakeville South on Saturday at 3 p.m. (Jon Weisbrod/SouthernMinn.com) 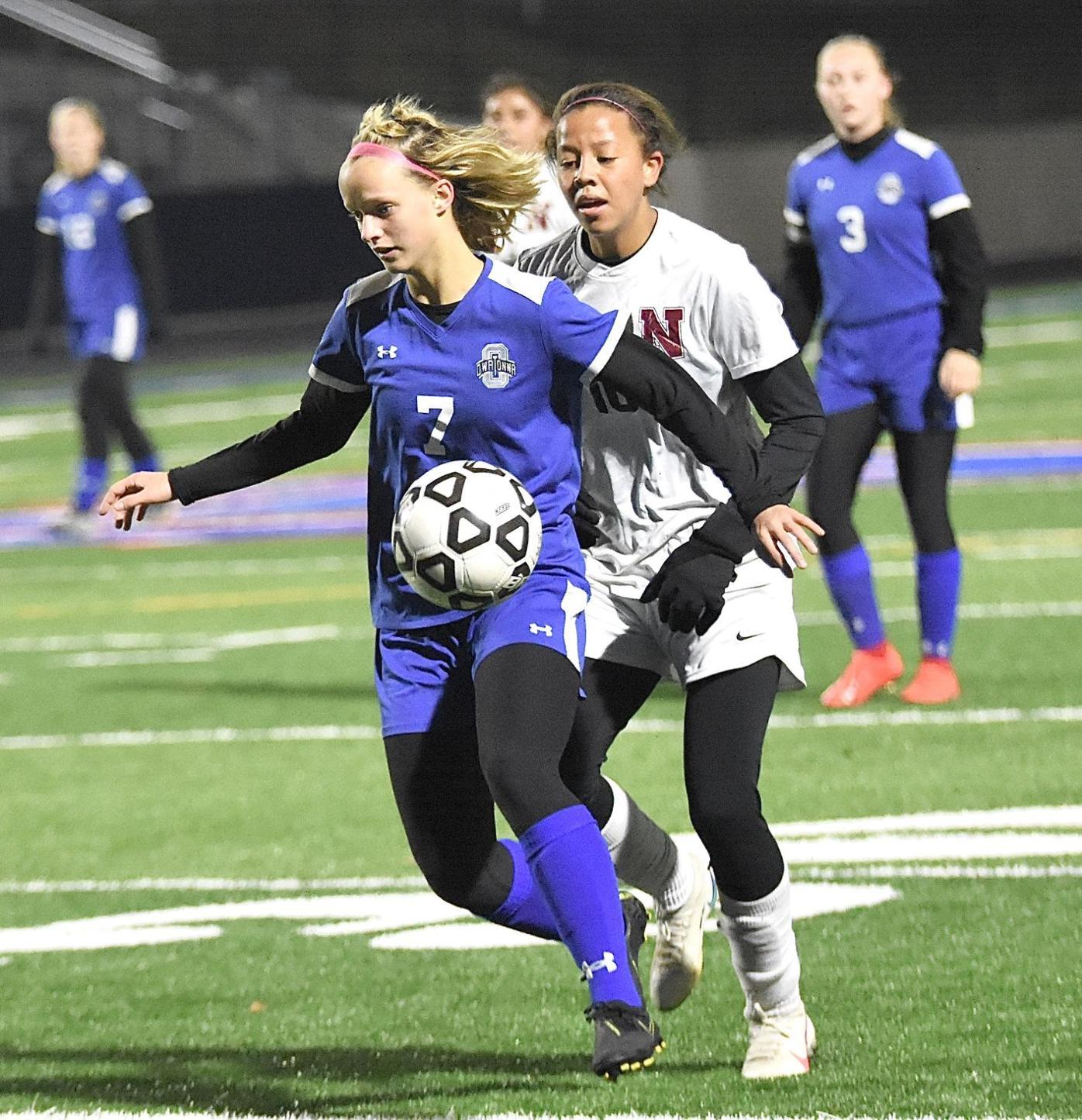 Owatonna sophomore Ezra Oien sprints down the left sideline on Wednesday night during a Section 1-AA semifinal game against Northfield played at the Hammer Sports Complex in Albert Lea. The Huskies take on Lakeville South on Saturday at 3 p.m. (Jon Weisbrod/SouthernMinn.com)

On the final night of the regular season prior to the section bracket being released, Owatonna girls soccer coach Nate Gendron threw out a few scenarios over the phone as to which opponent the Huskies might see in the postseason opener the following week.

The first team he mentioned was Lakeville South.

At the time, Gendron believed the Cougars — who entered the playoffs with just one regular season victory — would fall somewhere in the No. 6 to No. 8 range and align with OHS as the No. 2 or No. 3 seed.

Almost anticipating the matchup, the second-year head coach spoke cautiously about Lakeville South and translated a palpable level of respect for a program that had battled through a thicket of a regular season schedule as a member of the South Suburban Conference. From top to bottom, the SCC is considerably more balanced than the Big Nine Conference and widely-renowned as one of the most-competitive Class AA-only leagues in the entire metro area.

“They are a tricky team,” Gendron said on Tuesday, Oct. 6 after his team had just capped the regular season with a 1-0 shutout of Rochester Mayo. “They play in a really, really tough conference in the South Suburban and they are much better than their record indicates.”

Ironically, the second-seeded Huskies were ultimately positioned on the opposite end of the bracket as the No. 8-seeded Cougars and it appeared improbable that the teams would meet in the Section 1-AA tournament when the opening-round commenced on Thursday, Oct. 15.

Two upsets by the Cougars and two comeback victories by the Huskies later, and the seemingly impossible has materialized.

On Saturday afternoon, Lakeville South will take the short trip down Interstate 35 to square off against Owatonna in the final contest of the season for both teams. When the game kicks off at 3 p.m. at the Owatonna Soccer Complex, it will officially mark the first time since 2005 that the Huskies will participate in the section championship round and will be the third consecutive trip for the powerful Cougars. It is also the first time in program history that Owatonna will have played three straight section games at home, though Wednesday’s semifinal against Northfield moved to the artificial surface at Jim Gustafson Field in Albert Lea after inclement weather forced a last-minute change in venue.

“Our girls are so proud to have a home game in the second round of the tournament rather than going up to a place like Lakeville,” Gendron said after Wednesday’s 3-2 overtime victory over the Raiders. “That’s what we have always been doing, year after year. After they found out that they couldn’t play at home, on their home field (for the semifinals), they were defeated. But they still wanted to prove themselves. I keep on telling them that the definition of a resiliency is bouncing back from a difficult situation, and that’s sort of been the key of 2020.”

Though the current iteration doesn’t boast the top-to-bottom depth and elite skill of some of the program’s more recent squads, Lakeville South is still the reigning Section 1-AA champions and entered last year’s state tournament as one of the favorites to take home the ultimate prize before losing to Centennial, 2-1, in the Class AA quarterfinals.

The Cougars started the season 0-5-1 and did not score their first goal until their seventh outing in a 2-0 shutout of winless Burnsville on Sept. 17, which was exactly three weeks after their first game of the year on Aug. 27.

Since then, Lakeville South has progressively improved and is 2-2-2 in its last six games, including back-to-back road wins over top-seeded Rochester Century in the section quarterfinals and fifth-seeded Farmington in the semifinals.

Half of the Cougars’ losses this season have come against Rosemount, Eagan and Lakeville North, which sport a combined of 30-4-4 overall record and finished no lower than No. 12 in the final Class AA QRF rankings.

As battle-tested as Lakeville South might be, Owatonna is more than up for the challenge. The Huskies haven’t lost a game in more than a month and proven they can flourish in a variety of situations.

Owatonna started its current hot-streak — which includes an 8-0-1 record in its last nine games — by blowing out Austin, 9-1, and Faribault, 17-3, in record-setting fashion on Sept. 12 and Sept. 15, respectively, and has also shown the ability to win close games. In fact, each of the Huskies’ previous three victories have come by a single goal and the last two have featured second half comebacks.

The only non-victory for OHS since it caught fire came on Sept. 24 when it allowed a 3-1 lead slip away against Northfield in a game that finished in a 3-3 deadlock.

“What I really love is no matter the game, they do not turn it off,” Gendron said. “They just keep on pushing. I think that is what makes things special.”

After sneaking up on the league and earning all-conference honors as a freshman in 2019, Ezra Oien has blossomed into one of the top-scoring underclassmen in the state and leads the Huskies in scoring with 15 goals. Second-unit star, Hillary Haarstad, has also rang up double-figures with 12 goals and handed out three assists.

Sophomore Abby Vetsch — who also made first-team all-conference in 2019 — has compiled a team-best seven assists to go along with four goals while players like Lily Sampson (2 goals, 6 assists), Ari Shornock (4 goals, 5 assists) and Anna Herzog (7 goals, 4 assists) have provided a level of offensive depth that has elevated the program to a new level this fall.

Defensively, college-bound senior Emma Dahnert and junior Sarah Kingland have anchored the back row along.

Midfielder Syd Hunst has facilitated an offense that has scored 53 goals and has scored three or more goals on seven occasions this season.