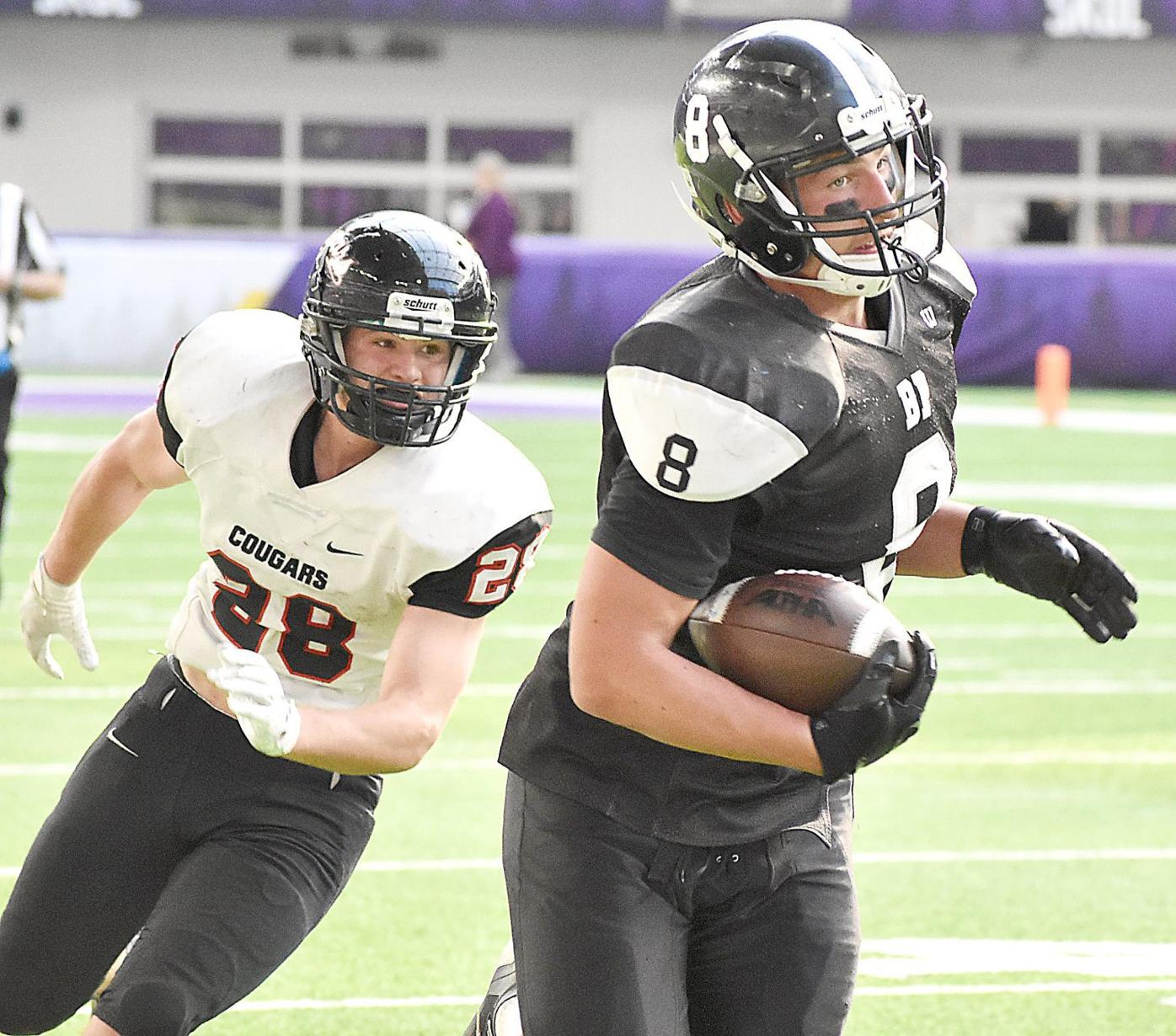 Blooming Prairie’s Gabe Hagen (8) breaks away from Ada-Borup’s Braiden Fetting after hauling in a pass near the right sideline in the second quarter of Saturday’s Class A state semifinal game at U.S. Bank Stadium in Minneapolis. The Awesome Blossoms won, 41-0, and will play in the state championship game on Friday, Nov. 29 at 10 a.m. (Dan Weisbrod/For the People’s Press) 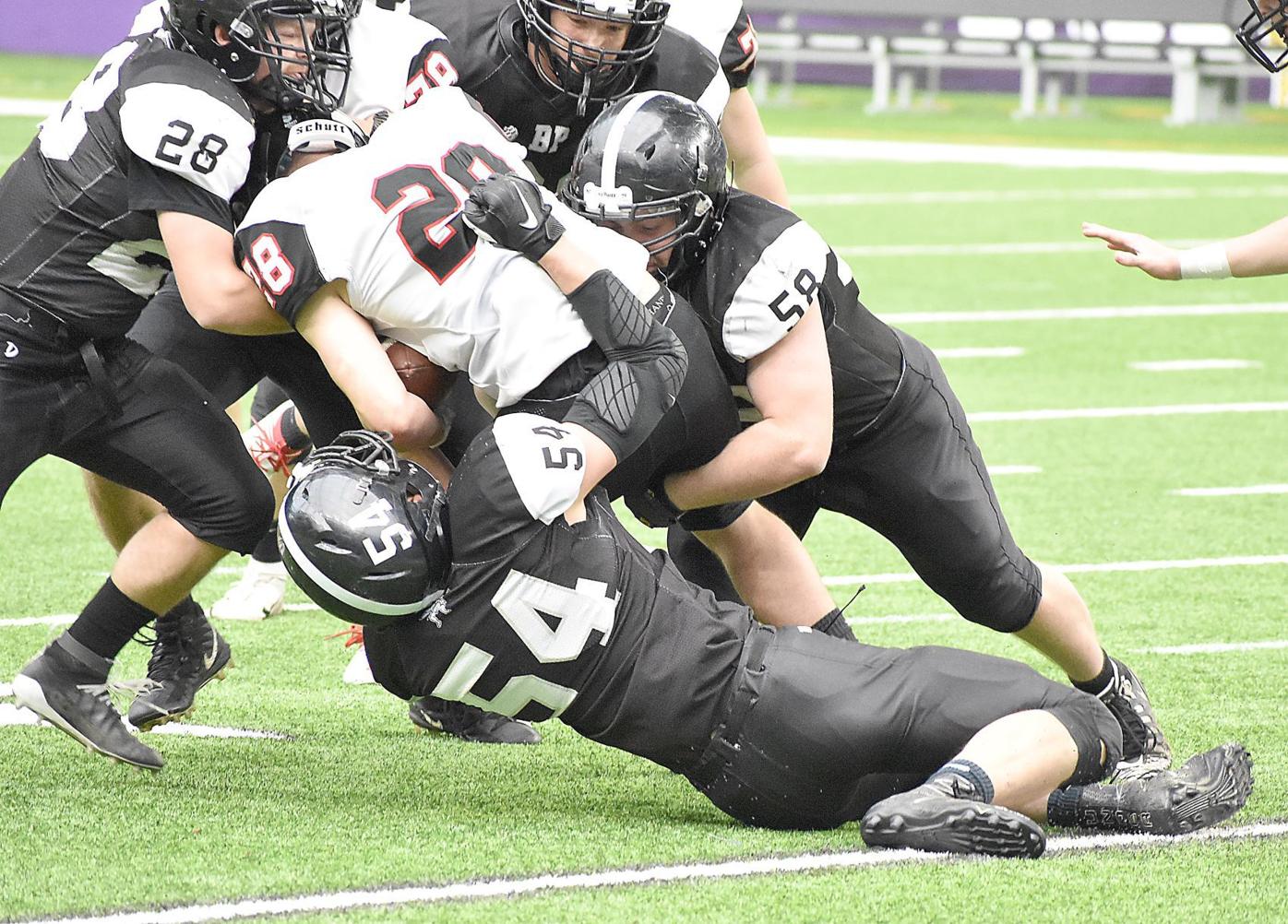 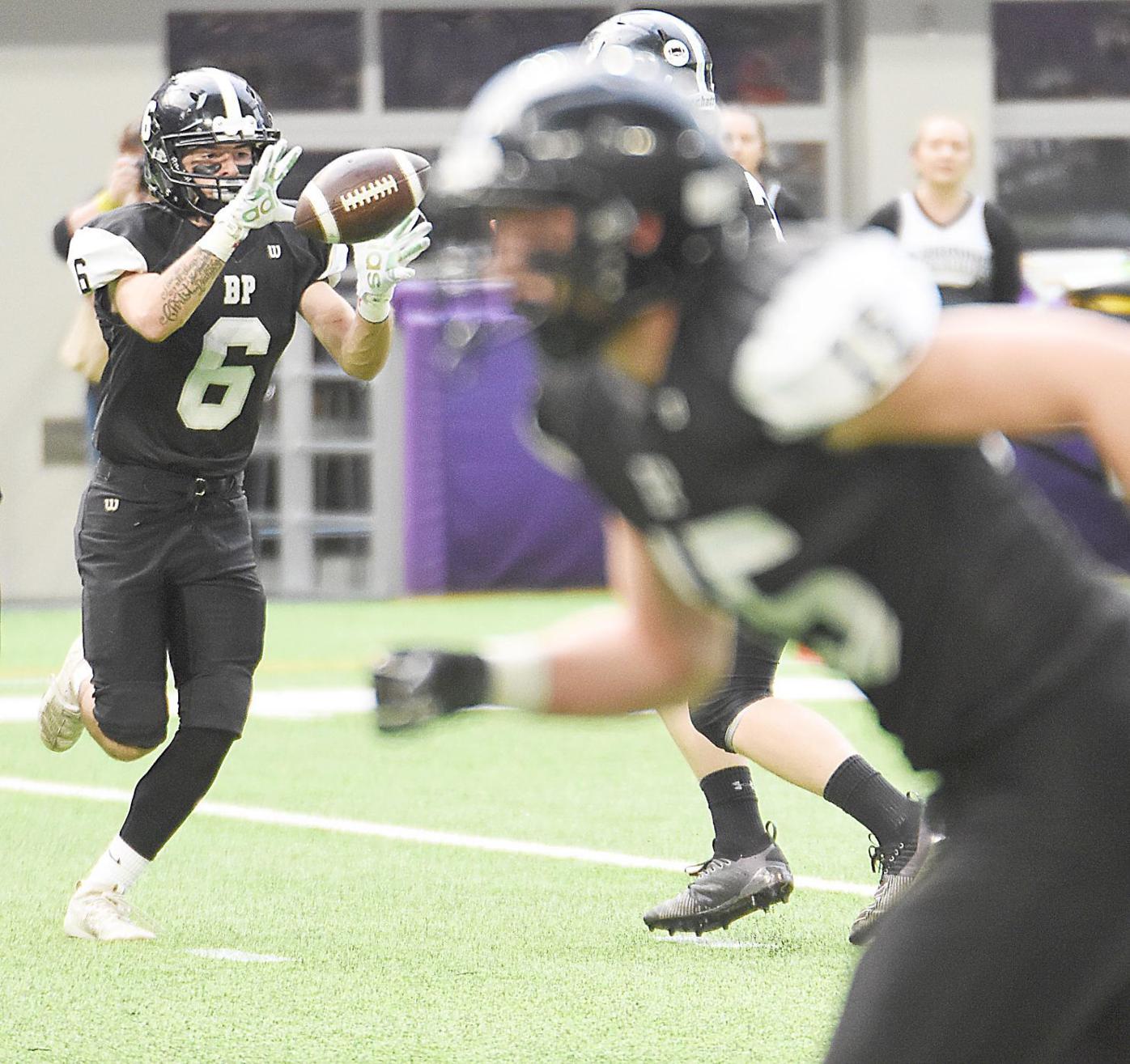 Blooming Prairie’s Gabe Hagen (8) breaks away from Ada-Borup’s Braiden Fetting after hauling in a pass near the right sideline in the second quarter of Saturday’s Class A state semifinal game at U.S. Bank Stadium in Minneapolis. The Awesome Blossoms won, 41-0, and will play in the state championship game on Friday, Nov. 29 at 10 a.m. (Dan Weisbrod/For the People’s Press)

MINNEAPOLIS — The Blooming Prairie football team still has one more game left, but the Awesome Blossoms have already ascended to heights never before reached in program history.

These boys are going to the Prep Bowl.

“I’ve been doing this for 23 years,” Blooming Prairie coach Chad Gimbel said before pausing and allowing himself to bask in the historic moment as he choked back tears. “To do it with this group of guys is awesome. As a coach and a player to have been through this for so many years and to finally break through and get this opportunity, that’s a huge step for us and the program and the kids. I am so happy they get to experience this too.”

Grasping full control on its opening possession and steadily adding to its lead as the game rolled forward, Blooming Prairie clinched its first ever berth in the Class A state championship with a resounding 41-0 victory on Saturday afternoon at U.S. Bank Stadium.

The next step for the Blossoms will be a date with undefeated BOLD on Saturday, Nov. 29 in Minneapolis with the Class A state championship on the line. The powerful Warriors — who spent the entire season ranked No. 1 in the state and eliminated BP in last season’s state semifinals, 37-7 — crushed Browerville-Eagle Valley, 56-7, in the early game on Saturday and, like the Blossoms, have dispatched each of its 12 opponents with relative ease en route to the state’s ultimate game.

The Blooming Prairie players haven’t forgotten last season’s humbling loss at U.S. Bank Stadium and have used the defeat as fuel to what has become a virtually unstoppable force on both sides of the ball. With the one-sided victory over the Cougars, the Blossoms move to 12-0 and remain the top scoring team in Class A at almost 49 points per game.

“There is nothing better than that,” BP running back, Matthew Pryor, said of the Blossoms’ rematch with the Warriors. “After the loss last year, we definitely had a chip on our shoulder and that’s what has pushed us through this whole offseason.”

As explosive and eye-popping as BP’s offense has been all season, it was the play of the defense against Ada-Borup that carried the team on Saturday afternoon. Blooming Prairie, which had lost in the state semifinals in 2009 and 2011, pitched its fourth shutout of the season and permitted just 141 total yards of offense, a large chunk of which came on the Cougars’ final drive late in the fourth quarter with the game having already been shifted to running time.

“We have been strong on the defensive side but to do it at this level against that caliber of a team with the weapons they have, I would say this was our best effort (of the season),” Gimbel said. “The kids showed up today.”

Remaining disciplined in their gaps and eating up blockers up front, the Blossoms surrendered just 91 rushing yards on 40 Cougars’ attempts for a 2.3 per-carry average.

“The defense really controlled the game for us and set up our offense,” Gimbel said. “Kudos to the defense and (coordinator) Matt Kittelson and all that defensive staff. Those worked tirelessly to get those guys in the right spots and the kids made plays.”

Taking the lead on their opening possession on a 12-yard Pryor run, the Blossoms stayed largely on-schedule all game and gobbled up 329 rushing yards on 41 carries. Pryor led the way with 183 yards and two touchdowns while Bradley Simon added 37 yards and two TDs on just five carries.

“In our playoff games, we have really been running the ball,” Gimbel said. “Our front has really been able to get a push and open some holes and Matthew has been able to find them and make guys miss and break some tackles. If you look back at our stats, we haven’t been just a pass team, we have had the run game and that’s something we worked on in the offseason to work on adapting to what the defense gives us to get more power.”

Though far from his most productive outing of the season, BP quarterback Kaden Thomas kept the Ada-Borup defense honest, shaking off two interceptions to finish 12-for-20 for 137 yards and two touchdowns. His 47-yard bomb to Gabe Hagen with 1 minute, 55 seconds remaining in the second quarter blew the game open and helped give his team a 27-0 lead heading into the break.

Hagen, who will play in the annual Minnesota Football Showcase in December, led the Blossoms with 53 receiving yards. Before his gut-punching touchdown reception down the right sideline, the 6-foot-3, 240-pound receiver snared a 6-yard pass from Thomas on 4th-and-5 late in the first quarter to keep a drive alive that would eventually lead to a Karson Vigeland 10-yard touchdown reception on the first play of the second quarter that upped the Blossoms’ lead to 14-0.

“He’s a crazy wide receiver,” Pryor said of Hagen. “He’s very talented. I mean, lots of teams game plan and focus on trying to take him away (but) he’s so athletic and fast, it’s impossible.”

Two possessions after Vigeland’s touchdown, the Blossoms engineered a 10-play, 71-yard drive that featured nine run plays, the final of which spanned 2 yards and helped put the Blooming Prairie ahead 21-0 with 4:13 left in the second quarter.

The Blossoms scored on their second drive of the third quarter on a 30-yard scamper by Pryor to snatch a 33-0 lead before the reserves capped a game-long 11-play drive with a short Tyler Archer touchdown to cap the scoring at the 4:07-mark.

Blooming Prairie thwarted a pair of Ada-Borup fake punts in the first half...The Blossoms held the Cougars to just 2-for-14 on third down...Ada-Borup reached the red zone just once late in the fourth quarter with the Blossoms leading 41-0.