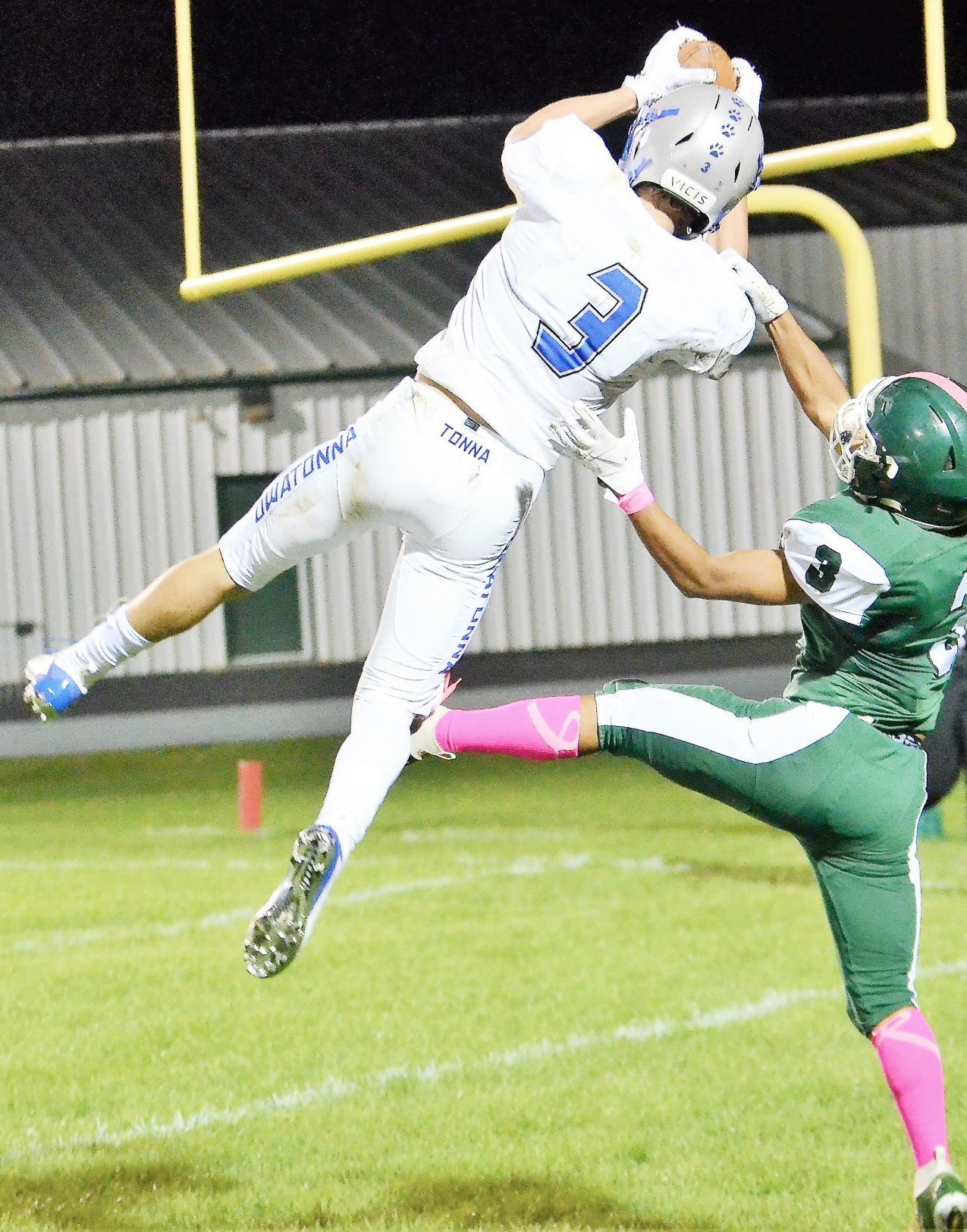 Owatonna’s Payton Beyer (3) leaps in the air and latches on to a pass from Sol Havelka in the end zone late in the second quarter of a 2019 Big Southeast District football game. Beyer played three years of varsity football for the Huskies and is this year's All-Area Player of the Year. (File photo/southernminn.com) 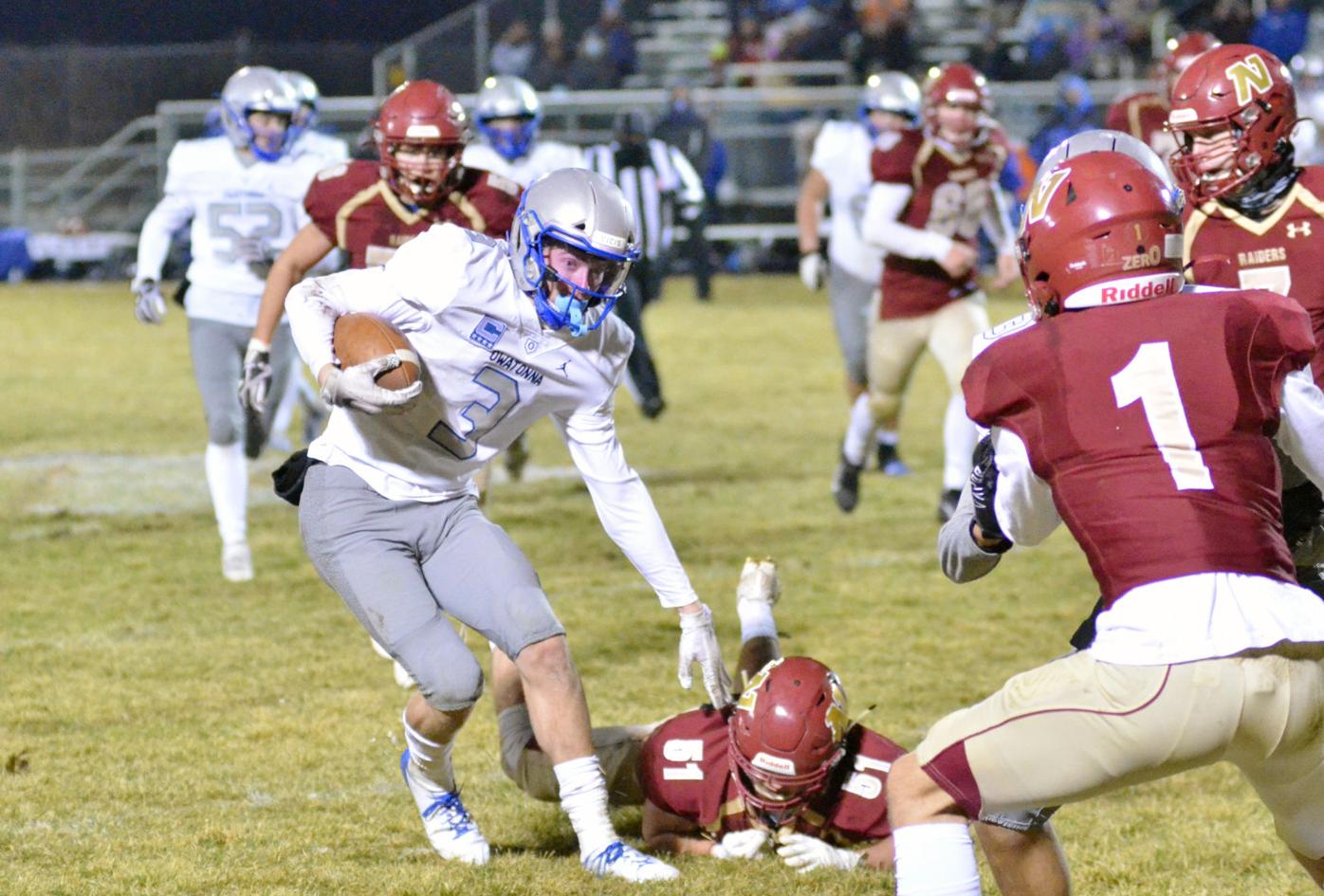 Owatonna senior wide receiver Payton Beyer breaks a tackle during a 42-0 victory at Northfield High School this season. Beyer finished with eight receptions for 129 yards in the victory. (Michael Hughes/southernminn.com)

Owatonna’s Payton Beyer (3) leaps in the air and latches on to a pass from Sol Havelka in the end zone late in the second quarter of a 2019 Big Southeast District football game. Beyer played three years of varsity football for the Huskies and is this year's All-Area Player of the Year. (File photo/southernminn.com)

Owatonna senior wide receiver Payton Beyer breaks a tackle during a 42-0 victory at Northfield High School this season. Beyer finished with eight receptions for 129 yards in the victory. (Michael Hughes/southernminn.com)

Sometimes they’re flashy, other times they’re routine, but he makes them even when everyone knows in a crucial situation the ball is coming his way.

The Huskies counted on the senior wide receiver this season more than ever and he rewarded them with another fantastic season that put him in the conversation of the best receiver in OHS history and made him an easy pick as the Owatonna People’s Press’ All-Area Player of the Year.

Beyer ended his three-year varsity career No. 3 on the all-time receiving list in school history after hauling in 78 career passes for 1,283 yards and 12 touchdowns. He caught six of those touchdowns this season as he amassed 694 yards on 49 receptions, even as he adjusted to a new receiving role.

After spending the past two seasons as an outside receiver, Beyer moved into the slot position this season as the Huskies tried to find different ways to get him the ball. It meant running routes he hadn’t run in the past, some of which included catching passes in the middle of the field more frequently.

“I think we threw the ball more than we ran it,” Owatonna head coach Jeff Williams said. “That had a lot to do with Payton’s playmaking ability.”

“Our third-down conversion rate was way higher than it would’ve been without him,” Williams said. “This year, our options were more limited. We didn’t have that big stable of receivers, so a lot of that fell on Payton. He’d get double coverage and still make a play.”

It helped that Beyer and Truelson have a strong connection on and off the field, where they have complete trust in each other. The two have grown up playing sports together since an early age. At first, they competed against each other in park and recreation leagues and later they ended up on the same squads through football, basketball and baseball. Through middle school, both actually played quarterback until Truelson emerged as more of a true quarterback than Beyer. The move worked to both personalities as Beyer has more of a free spirit attitude while Truelson studies the game.

“What really set Brayden and Payton apart was paying attention to detail, whereas Payton just loves to play,” Williams said. “Those two guys needed to be on the field at the same time. It just made natural sense to emphasize Payton as a receiver.”

Beyer admits that Truelson probably knows the playbook better than he does because Truelson has to know linemen’s assignments, too. But both nearly always know what’s on the other’s mind on the football field.

Williams recalled a rare instance where the two weren’t on the same page. Beyer ran a hitch route and Truelson threw a fade route. It came on a play where the receiver has several options of routes to run and the misfire shocked Huskies coaches on the sideline.

Beyer and Truelson have not only helped each other on the field, but also off the field. After Truelson tore his anterior cruciate ligament and started rehab work, Beyer worked out with him throughout the process.

“There’s no one else you’d want to go into a game with,” Truelson said. “He’s an even better friend.”

Truelson will leave OHS with a distinguished career, too. He finished as the No. 2 all-time passer for the Huskies after completing 260 of 421 passes for 3,753 yards and 41 TDs in his career. His 62% completion percentage is also second all-time in school history.

Together the duo helped continue the strong football tradition at Owatonna by winning section titles their junior and senior years to push the streak to five consecutive years. Both came on varsity for the second of back-to-back state titles. Truelson took over for an injured Sol Havelka in the second week of the 2018 season and held the role until the playoffs. He split time with Havelka the following season before taking over as the full-time starter this year.

Williams knew he had a good athlete coming up in Beyer because of his lineage. Beyer's father played on the defensive line for Owatonna and his mother was a standout athlete for the Huskies as well. Plus, he’s the nephew of Chad Kolander, the 1990 Minnesota Mr. Basketball award winner and Gophers basketball player.

Braydon Truelson, Owatonna, senior QB — 103 of 171 passing for 1,186 yards and 11 TDs. Finished as the No. 2 all-time passer at OHS after completing 260 of 421 passes for 3,753 yards and 41 TDs in his career. His 62% completion percentage is also second all-time in school history. A first team all-district pick in the Big Southeast Red Division.

Tanner Hall, Owatonna, senior RB — Had 157 carries for 715 yards and six TDs this along with 12 catches for 119 yards and one TD. Hall finished No. 12 on the all-time rushing list at OHS. Earned a spot on the first team all-district in the Big Southeast Red Division.

Grant Achterkirch, Owatonna, junior LB — Had 33 solo tackles and 17 assists for 50 total tackles to lead the Huskies. Also had one sack and two forced fumbles. Made the first team for all-district in the Big Southeast Red Division.

Drew Kittelson, Blooming Prairie, junior QB/CB — Kittelson continued the tradition of strong quarterback play at Blooming Prairie. Completed 86 of 128 passes for 1,318 yards with 22 touchdowns in a five-game season for the No. 1-ranked Blossoms. Kittelson threw just one interception and had a 147 quarterback rating for the season. He also ran for 284 yards on 41 attempts with three touchdowns. Defensively, he intercepted two passes and finished with two solo tackles and two assisted tackles. Named the Offensive Player of the Year for the Mid Southeast District Blue Division.

Josiah Hedensten, Medford, senior RB/LB — Hedensten was Mr. Everything for Medford. He rushed for 779 yards on only 95 carries for an 8.2 yard per carry average and 12 TDs. Add in his 220 receiving yards and he nears 1,000 offensive yards. Hedensten also caught a touchdown pass. On defense, he finished with 109 tackles, one forced fumble and one interception. Hedensten also played on special teams returning kicks.

Jack Paulson, Medford, junior RB/DB — Paulson ran for 949 yards and 12 TDs in just six games. On defense, he played strong safety and clogged up running lanes for opponents while also locking down receivers in the passing game. Named the Mid Southeast District White Division Offensive Player of the Year.

Clay Stenzel, NRHEG, junior LB — Stenzel ranked among the top 20 tacklers in the state prior to NRHEG having its season suspended due to COVID-19. He ended up leading the district in tackles with 44 in just four games, 33 of which were solo tackles. Stenzel also had a forced fumble and a fumble recovery to go with two sacks. He made the all-district team for the Blue Division of the South Central District.

Gavin Hermes, Medford, senior OL/DL — Teams simply did not run to his side. He constantly put pressure on the QB, allowing the Tigers to play defense without blitzing. Teams had a tough time blocking him. Anchored an offensive line that led to 2,132 rushing yards in eight games for the team.

Kordell Schlaak, NRHEG, senior QB/DB — Selected all-district for the South Central District Blue Division. Went 31-for-72 passing for 505 yards and six TDs in four games. Also had 14 tackles and a few pass breakups. Rushed for close to 150 yards if you do not include sacks as well.

Connor Budach, Owatonna, senior TE/LB — Budach’s amazing touchdown catch from his back in the end zone off a tipped pass will live on in Owatonna football lore for years to come but beyond that Budach, an all-district selection, put together an impressive season. He caught 11 passes for 123 yards and two touchdowns. Defensively, he had 26 solo tackles and four assisted tackles to go with two fumble recoveries, three pass deflections, one interception and 3 1/2 sacks. Finished second in defensive points for the Huskies.

Bradley Simon, Blooming Prairie, junior WR/FS — Had an impact on both sides of the ball for the Blossoms. Served as the quarterback of the defense by calling coverages and checking alignments. Finished with 31 total tackles (13 solo, 18 assisted). As a wide receiver, caught 18 passes for 235 yards and five touchdowns. Named to the Mid Southeast Blue All-District team.

Luke Larkowski, Blooming Prairie, senior OL/LB — An all-district performer for the Blossoms after finishing with 43 tackles (nine solo, 34 assisted). Filled in on the offensive line in all three positions as Blooming Prairie dealt with injuries throughout the line.

Colin Jordison, Blooming Prairie, junior WR — Caught 15 passes for 163 yards with three touchdowns for the Blossoms on his way to earning all-district honors.

Tate Hermes, Medford, sophomore OL/LB — An all-district pick, who had 68 total tackles (48 solo, 17 assisted) to finish second on the team for Medford. Recorded 2 ½ sacks, an interception and a tackle for a loss.