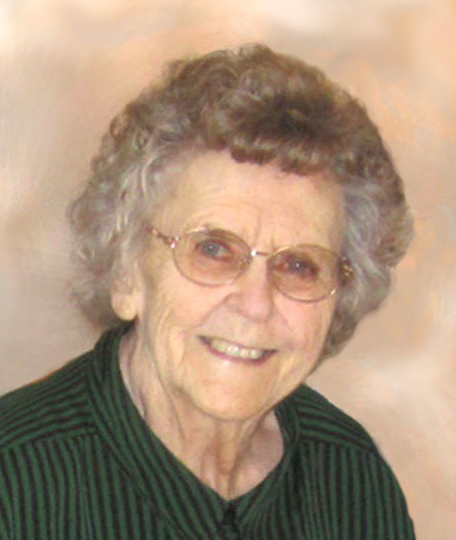 Arline Blomquist Schmiesing 1923–2020 Hanska —Arline Blomquist Schmiesing, 96, of Hanska died May 18, 2020 at the Oak Hills Living Center in New Ulm, Minnesota. Due to the restrictions of the coronavirus, a private family burial service will be held at Mt. Pisqua, Nora Church, Hanska, Minnesota. We will celebrate Arline's life by memories and memorials given in her memory to: Nora Church, Alzheimers Association, NAMI, donor's choice. Minnesota Valley Funeral Home is in charge of arrangements. Online memories and condolences appreciated at www.mvfh.org. Arline Mildred Blomquist was born on a farm in Sveadahl, Watonwan County, July 22, 1923, to Algot and Evelyn (Ouren) Blomquist. She and her eight siblings grew up in the house built by her grandparents Nels and Nora Ouren by the park in Hanska. Arline graduated from Hanska High School in 1940 as valedictorian of her class. January 8,1944, Arline Blomquist and Virgil Schmiesing were married in Brown County, Minnesota. They were high school sweethearts and life-long soul mates, celebrating their 71st anniversary in 2015. They moved to the Schmiesing farm seven miles west of Hanska, where they raised their nine children. Arline Blomquist Schmiesing accomplished so many things while raising a large family. A strong believer in education, she encouraged each of her nine children to go to college, worked on "dollars for scholars", as an aid in Hanska Public School, was on the school board, a 4-H leader, a local and county leader, and won a Leadership Award to Washington, D.C. Arline worked diligently as an advocate for the mentally ill. She was an avid historian and writer, and has written the local news for The Hanska Herald. She wrote for the Hanska a Century of Tradition centennial publication, wrote the Ouren Odyssey, and numerous books and histories of the area, including Nora Church history and lots of early Hanska history and family history. She won a Brown County Historical Society award for her research, writings, and leadership. The publication of her book, Hanska's Musical Heritage, was a highlight of her work. Words were her music-she composed history and stories for all of us-'a legacy from an amazing mind and researcher. She was a life-long scholar and writer…'one of the most intelligent people we have ever known, remember her children. She continued to write in her journals until her death. Arline and Virgil loved their years spent enjoying family and reunions at their cabin on Pelican Lake after they sold the dairy cows in 1980. March 29, 1998, a massive tornado devastated the Schmiesing farm, taking the barn, outbuildings and trees. Arline put her typewriter to work again to record this historical event. Arline was a devoted member of Nora Church. She and Virgil dedicated their lives to their family-children, grandchildren, and great grandchildren-and to each other. Arline cared for Virgil in their Hanska home, when he suffered from memory loss, until he entered Divine Providence Nursing Home at Sleepy Eye in 2009. Arline continued to live in her Hanska home until heart surgery in 2012 made that difficult. In December of 2013 she moved to Oak Hills Assisted Living. Virgil had moved to Oak Hills Nursing Home the year prior, so they had many good visits together. Virgil died there January 27, 2015. Arline continued to write and enjoy visits from family and friends at her Oak Hills apartment, a sharp and intelligent conversationalist, a well-loved and much-admired woman. Arline Blomquist Schmiesing is survived by her nine children: Susan (Duane) Leske, Stephanie (Doug) Kolbe, Linda (Larry ) Kraus, Tom, Mark (Karee), Lane (Jody), Scott (Tracey) Schmiesing, Gretchen (Mike) Peppin, Kim (Matt) White.

To plant a tree in memory of Arline Blomquist Schmiesing as a living tribute, please visit Tribute Store.
Load comments