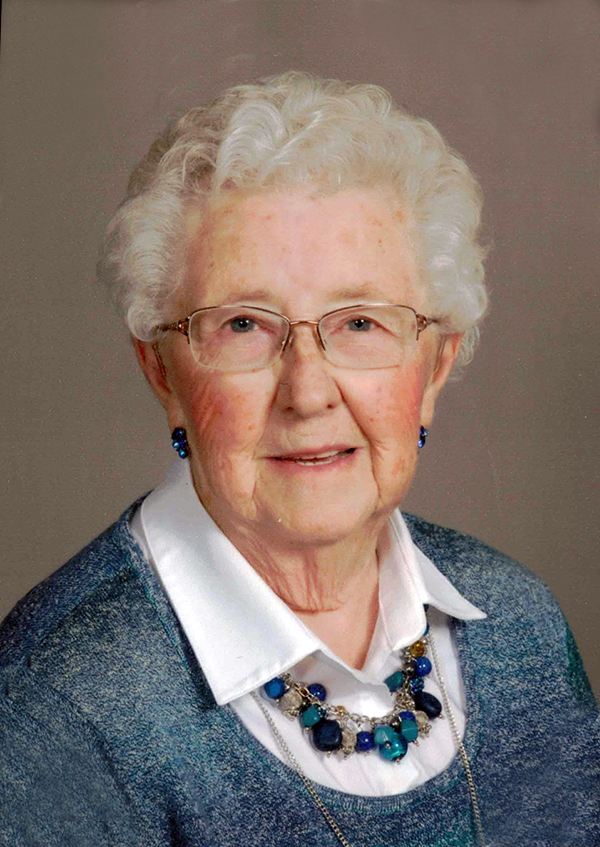 Marian Utpadel 1923–2020 Owatonna —Marian Christine Utpadel, age 96, of Owatonna, died Saturday, May 23, 2020 at the Homestead Hospice House, Owatonna. Arrangements are being completed by the Boldt Funeral Home, Faribault. Marian Christine was born on a farm near Ellendale on August 15, 1923 to James and Anna Johnson. She was the second of eight children. On June 1, 1943 she was united in marriage to Anton Olson and they farmed for 31 years near Ellendale. Together, they had five children; Duane, Shirley, Alvin, Jeanne and Sonya. Anton died of a heart condition in 1974. In 1979 Marian married George Utpadel and they made their home in Owatonna. Since 1975, Marian did volunteer work at the Owatonna Hospital, Cedar View Care Center and delivery of Meals on Wheels. She was a member of Our Savior's Lutheran Church, Owatonna and was active in the Alter Guild and the Quilters. Marian helped with many quilts for church functions and to donate to those in need. Each family member also has a quilt made by Mom, Grandma or Great-Grandma. She enjoyed spending time with her children, grandchildren and great-grandchildren as well as traveling and spending time at her cabin on the lake. Marian is survived by three daughters, Shirley Toft, Jeanne (and Vernon) Simonson and Sonya (and Gary) Peterson; eleven grandchildren, nineteen great-grandchildren and one sister-in-law, Lenore Johnson. She was preceded in death by her parents; husbands, Anton Olson and George Utpadel; sons, Duane (and Patty) Olson and Alvin Olson; son-in-law, Paul Toft; sisters, Jeanette (and Ray) Peterson, Lou (and Glen) Anderson and Donna (and Bob) Horecka; brothers, Robert Johnson, John (and Martha) Johnson, Alton (and Lorraine) Johnson and Kenneth (and Ruby) Johnson; brothers-in-law, Edwin (and Eva) Olson, Jim (and Joanne) Olson and sisters-in-law, Irene (and Rex) Medcalf, Erlys (and Merlin) Cole and Mary Ann (and Bill) Rohwer. Marian will be laid to rest at the Geneva Community Cemetery on Saturday, May 30, 2020. A Celebration of Life will follow at a later date. Visit boldtfuneralhome.com for information and guestbook.